YoungSoo Cho was in a good mood.

And for good reason.

Cho’s in charge of marketing for Chinese Community Health Plan, the smallest of the eleven health plans participating in Covered California. And like other executives at CCHP — which traditionally serves about 15,000 members of San Francisco’s ethnically Chinese community — Cho has been ambitiously working to grow the plan’s business by one-third this year.

“Our exchange target enrollment through the end of March 2014 Open Enrollment Period is +4,950,” Cho told California Healthline via email back in December.

But when “Road to Reform” checked in with Cho this week, he said that number didn’t apply anymore; CCHP needs to come up with a new one. That’s because the plan had received 5,036 applications as of last week, the halfway point of the enrollment period.

But for other small health plans — who were hoping the insurance exchange would be a vehicle to pick up new members– it hasn’t been a smooth ride.

One small health plan dropped out. Another was kicked out. And a third is openly hunting for business.

That’s in sharp contrast to the experience of the four largest plans on the exchange — Anthem, Blue Cross, Health Net, and Kaiser — which are hoovering up new members, based on the most recent data available.

About 96% of Covered California customers are picking among the “big four” plans, according to a “Road to Reform” analysis of October and November enrollment figures. (Based on off-the-record interviews with several health plan officials, a similar trend continued through December).

Exchange officials take issue with that characterization. “While the majority of enrollment across the state is in four plans, it’s different when you look region by region,” Executive Director Peter Lee said in December.

However, a region-by-region look shows that’s not true. “Road to Reform” analysis reveals that those four plans commanded 100% of sign-ups in nine of Covered California’s 19 regions, and captured at least 95% of market share in seven other regions. 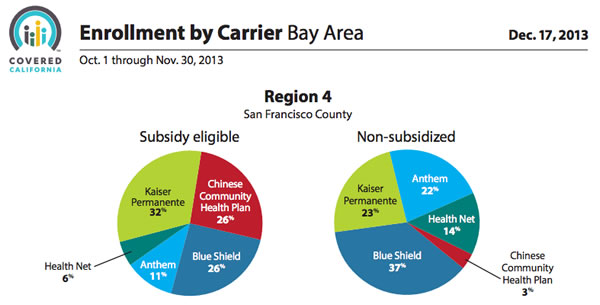 What Gives These Plans an Edge?

A range of factors is driving consumer interest, executives at both CCHP and Sharp Health Plan say. And they stress that they’re still mulling the causes even as new enrollment data come in. But to some extent, the simplest explanations may be the right ones.

In the case of CCHP, while the plan may not be well-known beyond San Francisco’s ethnically Chinese community, it’s offering some of the most competitive rates in the state, and maybe the nation.

Christina LaMontagne — vice president of health at NerdWallet, a consumer analytics service that offers a popular Obamacare Plan Finder tool — points to one chart showing that in the San Francisco area, the average uninsured 27-year-old can get a Bronze plan for $4 per month from CCHP. That’s miles ahead of the plan’s nearest competitors.

And based on NerdWallet data, CCHP is the only non-Big Four plan listed as the “least expensive” plan available in its region.

“Our price advantage is crazy,” Cho concedes. He notes that CCHP comes by its advantage based on actuarial data drawn from its existing members and efficiencies running its current HMO model. And some new customers, perhaps 20%, will sign up with the plan based solely on its low rates.

Yet there’s also a nuanced explanation, Cho notes. CCHP historically has been crowded out by some of the larger plans — when employers offered coverage to their workers, they would tend to contract with insurers like Kaiser, for example. But the exchange has made CCHP more broadly available to customers who may have been previously locked out.

CCHP is well-positioned to capitalize on its unique features: There are more than 180,000 ethnically Chinese residents of the San Francisco area who aren’t members of CCHP and might be interested in a plan better catered to their language needs and traditional popularity of therapies like acupuncture, Cho says.

(KQED’s “State of Health” blog offers useful details on CCHP’s marketing strategy and attempts to go beyond its traditional customer base.)

Meanwhile, Sharp Health Plan’s success story can’t be due only to its rates — which are competitive, but are basically in line with the San Diego market. Instead, its promising debut on Covered California is likely driven by its strong regional brand presence.

Although the two-decade-old plan is new to the individual market, it’s already familiar to many San Diego residents; the plan serves 70,000 members in its commercial book of business, CEO Melissa Hayden-Cook told California Healthline.

An added advantage: The health plan’s parent company, Sharp HealthCare, is the largest private employer in San Diego and caters to almost one-third of the market through its integrated delivery system.

Plan executives say there was built-in interest waiting for them, too. “There has long been a demand for an individual product from Sharp Health Plan, and Covered California provides a great opportunity for us to enter that market and serve the community,” Hayden-Cook told California Healthline by email. And “we believe that the brand equity we have built up in the community over the years has really paid off during this enrollment period.”

Since Covered California’s customers began signing up on Oct.Â­ 1, 2013, both CCHP and Sharp Health Plan have essentially held steady in capturing market share in the regions they serve. And if present trends continue, that means both plans could pick up several thousand additional members before open enrollment ends in March.

But Sharp Health Plan executives say they’re already pleased with their sign-up numbers — although perhaps any figure would do.

“We did not have a concrete enrollment goal for the first year of the program,” Sharp’s Hayden-Cook said. “We don’t believe [anyone] could accurately predict what enrollment would be given the unknowns about health care reform.”

Here’s a look at what’s making news as the nation continues down the road to reform.

Thanks, Obamacare? At The New Republic, Jonathan Cohn deconstructs the debate over Cedars-Sinai Medical Center and narrow networks, with a close eye on the role of the Affordable Care Act and whether its reforms are limiting patient choice. (See related column in “Road to Reform.”)

Access to Medicaid boosts emergency visits: Like dueling banjos, The Incidental Economist’s Austin Frakt and Adrianna McIntyre both examine the new data from the Oregon Health Insurance Experiment, offering some broad thoughts and noting that the findings aren’t counterintuitive.

Looming cuts to Medicare Advantage: At Forbes, Scott Gottlieb explores why MA plans will continue to face rate cuts and explains what made them a political target in the first place.