Shane Peebles has a ticking time bomb in his mouth.

He has multiple cavities, including one that has been infected and formed a pocket of painful pus. He also has a disease that causes swollen, bleeding gums, making it painful to chew.

He finally visited a health clinic two months ago when the pain became unbearable — and learned that it would cost $300 for surgery to treat the infection.

But Peebles is homeless and he cannot afford that. He got a free checkup, cleanings and antibiotics to reduce the swelling in his face and jaw from the Venice Family Clinic, a health center in Los Angeles that serves more than 24,000 low-income, uninsured and homeless individuals. Last year, the clinic had more than 5,000 dental visits, overseen by two full-time dentists and one volunteer. They offer procedures like tooth examinations, cleanings, fillings, extractions and basic gum treatment — but not the surgery that Peebles needs.

Last month, the Department of Health & Human Services awarded $156 million to 420 health centers around the country — including the Venice Family Clinic — to help address an overwhelming demand for affordable dental coverage. According to the department, 108 million Americans have no dental insurance and access to care can be difficult even for those who are covered.

“It’s the first time the grants are targeting oral health services,” said Martin Kramer, head of the communications office at the Health Resources and Services Administration, a part of HHS.

Dental care has become a luxury item for many middle- and low-income families, especially for adults. Cost is the primary barrier. Twenty percent of low-income adults say their mouth and teeth are in poor condition, according to the American Dental Association.

While dental benefits are guaranteed for lower income children under Medicaid and CHIP, dental coverage for adults in Medicaid is not compulsory and varies from state to state.

But even if Medicaid offers coverage, many patients have trouble getting appointments because often dentists say reimbursement rates are too low.

For these people, health centers are the go-to for dental care. Yet health centers, which generally rely heavily on federal funding, say they have trouble supporting the level of dental services needed by patients.

The Lingering Toothache For Adults

Marko Vujicic, chief economist of the Health Policy Institute in the American Dental Association, found that as the number of children getting dental care has been rising, adults have been increasingly staying away from their dentists. 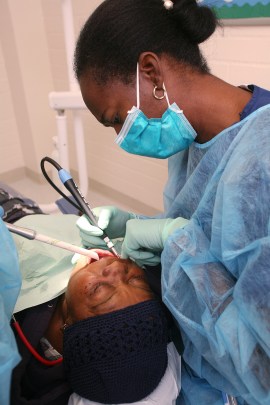 Visits to private dental offices fell by 9 percent from 2006 to 2012 – but adults have been seeking more care at health centers and emergency departments, where dental appointments have increased 74 percent and 20 respectively.

“What’s driving that? Coverage is a huge issue,” he said. “We see adults increasingly reporting financial barriers to dental care because we haven’t had any sort of coverage expansion.”

Even for those with dental insurance, Vujicic said coverage and cost is still a problem.

Peebles has dental coverage under California’s state dental insurance, Denti-Cal. But Denti-Cal has a history of funding problems, and it has limits on care.

In 2009 the state legislature removed adult dental services from Denti-Cal coverage because of budget constraints. The health department was sued over the cuts, and the coverage was reinstated in 2010.

The reason, according to the commission, was that California has one of the country’s lowest reimbursement rates for dentists.

In 2013, only 29 percent of California dentists participated in Denti-Cal compared to the national average of 42 percent. Nonprofit dental providers testified at the commission’s hearings that they are overwhelmed with Denti-Cal patients, putting some on three-month waitlists.

“It’s getting harder to find dental care,” said Maria Chandler, a pediatrician and the chief medical officer at the Children’s Clinic: “Serving Children and Their Families” in Long Beach, Calif. “Patients line out every day to get care, it’s so highly overwhelmed that most of our adults cannot get care.”

Her clinic is one of the health centers awarded dental funding last month in the federal grant. The clinic plans to hire dentists and assistants with the $349,999 it received.

The clinic never had in-house dentists in the past and relied on pediatricians or medical assistants. Patients receive basic dental services, such as screening and cleaning, while more complex procedures are referred to dentists elsewhere.

“It’s hard to provide dental care without some sort of grant support because the revenue from the care will not cover the cost,” she said. “And I think this grant and the services that we are going to provide is still only a fraction of what is needed.”

Peebles might agree to that. He just found a new job as a bouncer at a local bar, and he is somewhat resigned to the fact that part of his paycheck will be spent on the oral surgery.

His caseworker from the clinic is trying to help him find an affordable option for treatment.

“The toothache is probably my biggest issue right now,” he says. “I’m going to have to get it done as soon as possible. I’m tired of going through the pain.”