This story also ran on HuffPost. This story can be republished for free (details).

Gavin Newsom knew it was a political gamble when, as the newly elected mayor of San Francisco, he promised to eradicate chronic homelessness.

“I recognize that I’m setting myself up. I’m not naive to that,” he told his hometown newspaper in 2003 as he embarked on a campaign to sell his controversial plan. It hinged on slashing welfare payments for homeless people and redirecting those funds to acquire single-room occupancy hotels, converting them into long-term housing with health and social services.

Over-promise he did, and the venture ultimately failed. But that pledge by Newsom — who at the time was a young, politically connected wine shop owner relatively new to public office — previewed a brand of political leadership on full display today as the first-term governor confronts an unprecedented public health emergency that has decimated the state’s economy and killed more than 4,280 Californians.

The COVID-19 pandemic has catapulted the 52-year-old Democrat into greater national prominence, winning him praise and voter support for taking decisive action to control the spread of infection in the absence of strong federal leadership.

But it has also exposed his penchant for making ambitious, showy announcements — often broadcast to a national audience — that aren’t necessarily ready for prime time. His plans regularly lack detail and, in some cases, follow-through.

“This governor wants to get a lot done even if all the details aren’t quite there yet. It’s uniquely his approach,” said Democratic strategist Dana Williamson, longtime adviser to former Gov. Jerry Brown. “He isn’t afraid to go big. The upside is establishing yourself as a real leader and, in the case of COVID, saving lives. But the downside is it doesn’t always work out quite perfectly.”

Newsom has a long history of pushing big ideas before they become popular, including legalizing gay marriage and recreational marijuana use, halting death penalty executions and expanding free health care for undocumented immigrants. Since his entry into public life, he has cultivated the image of a political risk-taker willing to buck the Democratic Party establishment. And although he has demurred, there is widespread speculation that Newsom has presidential ambitions.

Since the start of the pandemic, Newsom has been praised by public health experts and Democratic strategists for making politically courageous decisions such as enacting the nation’s first statewide stay-at-home order, preventing widespread sickness and death. He has dramatically expanded hospital capacity while seeking to attack major problems as they erupt, from dire shortages of protective gear for hospital workers to inadequate testing in rural towns and poor, inner-city neighborhoods.

But as the crisis wears on, the list of Newsom’s unfulfilled promises is growing:

In other cases, the governor has artfully avoided making specific promises. For instance, he has called the safety of nursing home patients and staff members a “top priority” without detailing plans, allowing him to dodge criticism even as more than half the deaths in California have occurred in long-term care facilities, according to state data.

Yet so far Newsom is showing strong support from Californians. Nearly 70% of likely voters say he’s doing a good job of handling the pandemic, according to a new poll released Wednesday by the Public Policy Institute of California. His overall approval rating has climbed by double digits since February, rising from 52% to 64%.

But his support could erode if the public begins to notice that his promises — and lofty rhetoric — do not match reality, said Mark Baldassare, president and CEO of the institute.

“People can be forgiving and give the governor the benefit of the doubt, but that can turn from positive to negative very quickly,” Baldassare said. “The risk is public opinion can shift very quickly if people get a sense that it’s not going well or according to expectations.”

Although Newsom himself has acknowledged criticism that the state is falling short on some fronts, his chief spokesperson Nathan Click defended the governor’s approach.

“When it’s your life or livelihood on the line, wouldn’t you want leaders who are moving aggressively to help people on every possible front?” Click said in a statement. “He’s not afraid to swing for the fences — especially in a time of massive need.”

Daniel Zingale, Newsom’s former chief adviser, who retired earlier this year, argued that the governor’s handling of the pandemic has saved countless lives while bolstering the social safety net for those at greatest risk of contracting the coronavirus.

“When you have a crisis like this that is unprecedented, there is no real playbook,” Zingale said. “I think Gavin Newsom was made for this moment. This is a situation where you want a governor who is high-energy, deeply earnest and prone to action rather than inaction.”

Newsom’s political career dates back to the late 1990s, when he was appointed to San Francisco’s parking and traffic commission by its then-mayor, Willie Brown. Soon thereafter, Brown tapped Newsom to fill an open seat on the San Francisco Board of Supervisors. Running as the incumbent in 1998, Newsom was elected that year to his first full term on the board.

During his early years in public life, he honed his approach to politics — aggressively seeking national media attention for first-in-the-country social and economic policies. In 2004, the year he took office as mayor, Newsom granted same-sex couples marriage licenses before it was legal, and in 2006 he signed into law the nation’s first universal health care program, which covered all city residents regardless of their immigration status or ability to pay.

Newsom, in his 2013 book “Citizenville,” described his leadership approach as “Ready, fire, aim.”

“I’m as proud of some of my failures in business and politics as I am of my successes,” he wrote. “Failure isn’t something to be embarrassed about; it’s just proof that you’re pushing your limits, trying new things, daring to innovate.”

Newsom believes strongly in setting “audacious goals,” even if he risks over-promising or alienating supporters, said Peter Ragone, who was press secretary for part of Newsom’s mayoral tenure.

“Gavin has always believed that if you show people you’re thinking big and trying hard, they will take that over timidity, even if you might fail,” said Ragone, who remains a close, informal adviser to Newsom and also advises New York City Mayor Bill de Blasio. “He wasn’t able to completely eradicate homelessness, but the voters were OK with that because they saw he was trying. Success doesn’t have to be an absolute policy triumph.”

Now Newsom is facing the biggest challenge of his political career, with several high-profile crises slamming California at once: A global public health emergency. Widespread civil unrest sparked by the killing of an African American man in Minnesota, George Floyd, at the hands of a white police officer, Derek Chauvin. Rising unemployment that could reach 30%. And another potentially devastating wildfire season.

The coronavirus pandemic, in particular, could have long-lasting consequences for Newsom’s future, said Dr. Leonard Marcus, co-director of the National Preparedness Leadership Initiative, a joint program of the Harvard T.H. Chan School of Public Health and the Harvard Kennedy School of Government.

“The politics of crisis leadership are high-consequence,” Marcus said. “For every political leader, a crisis like this is going to make or break their career.” 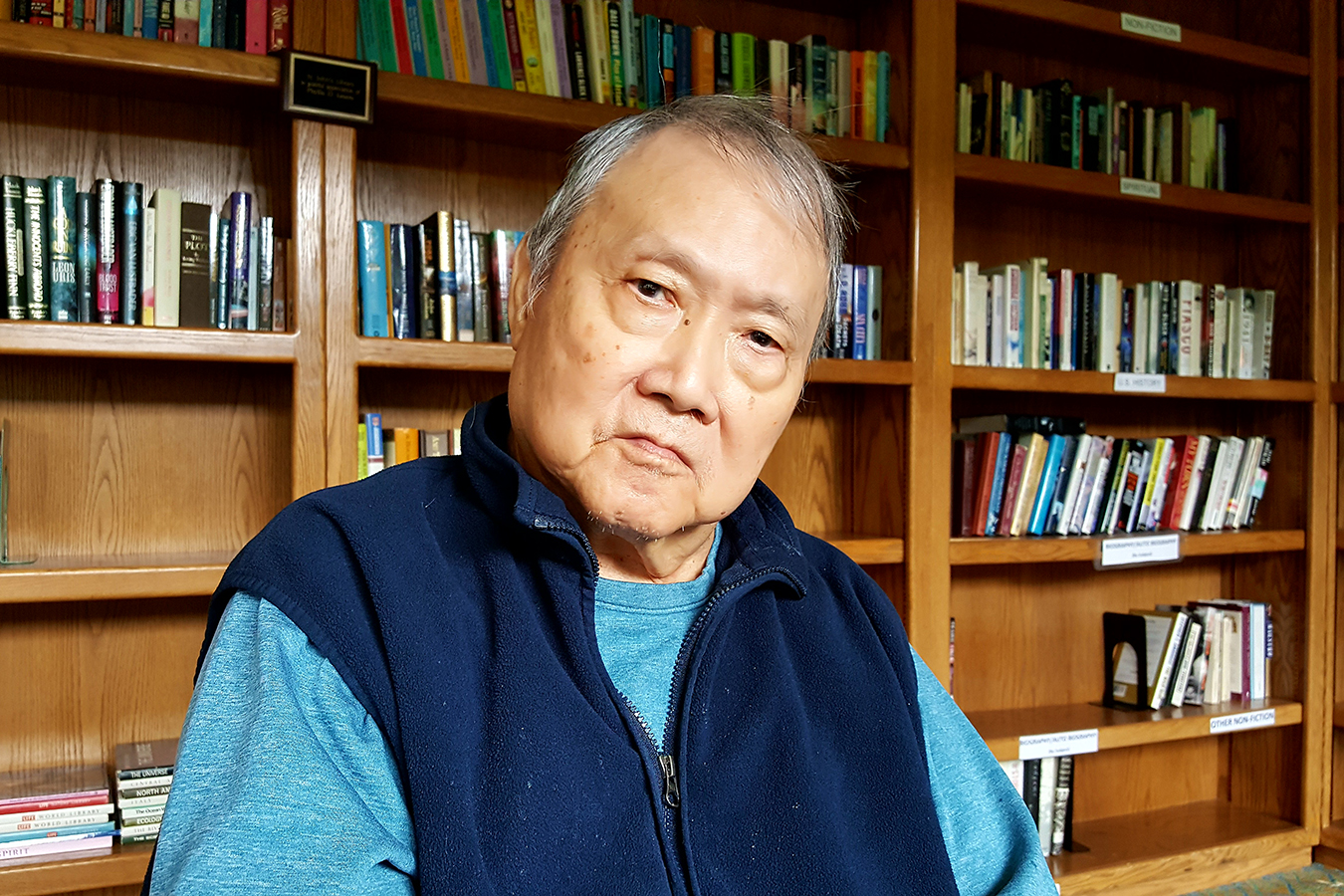 George Chin, 80, lived in a nursing home in Woodland, California, until April 22, when he died of COVID-19, according to his family. Chin died six days after he first complained of shortness of breath and spiked a high fever.(Courtesy of Simon Chin)

Davis resident Simon Chin has grown disillusioned with Newsom since the start of the crisis.

Chin’s father, 80-year-old George Chin, lived in Stollwood Convalescent Hospital in nearby Woodland. Chin regularly tuned into Newsom’s public briefings on the crisis to hear the governor say he was committed to preventing infections in nursing homes and protecting staff members and residents.

But infections in senior care homes continued to rise. And although Newsom has called for universal testing of residents and staffers, the state hasn’t provided the resources to make that happen, said Jason Belden, emergency preparedness director for the California Association of Health Facilities, which represents California’s roughly 1,200 state-regulated nursing homes.

State Health and Human Services Secretary Mark Ghaly said it’s the responsibility of nursing homes, not the state, to test.

“It’s not what we’re doing, and it’s, in our view, not feasible,” Ghaly said in an interview, noting that across the state, there are about 119,000 nursing home beds and about 90,000 staff members.

Newsom’s rhetoric at times has given the public a false sense of hope, said Dr. Michael Wasserman, president of the California Association of Long Term Care Medicine.

“When it comes to vulnerable older adults in California, all this governor has been doing is saying he’s going to act, he’s going to help them, but he hasn’t actually taken action,” Wasserman said. “People are dying because of it.”

Newsom’s reassuring statements during his public briefings made Chin feel like the state was doing more to prevent widespread infections, he said.

But Chin’s father died of COVID-19 on April 22. State records show 15 residents — roughly half of the nursing home’s capacity — died of the disease.

“We had no idea that there were such big problems in skilled nursing facilities based on what the governor was saying,” Chin said. “By the time we found out, it was too late.”