ANSFIELD, Ohio — When President Barack Obama signed his landmark health care bill on March 23, 2010, he achieved what presidents and members of Congress had long tried and failed to do — to provide near-universal health insurance to Americans.

Democrats were jubilant. Those in Obama’s inner circle, like Bob Kocher, a special adviser to the president on health care policy and one of the law’s architects, celebrated the victory at the White House.

“It was a moment of total joy,” Kocher recalled. “We felt like we’d accomplished something hard and amazing and important that would go down in history as being an important step forward in American health care.”

Since President Harry Truman, every Democratic president — and Republican Richard Nixon — dreamt about universal coverage. The health insurance industry, hospitals, physicians and other interest groups fought previous reform attempts. But by 2009, with more than 55 million Americans uninsured amid the Great Recession and Democrats in control of the government, those groups reconsidered their position.

Despite widespread support from industry, the bill became a flashpoint for bigger ideological battles.

“In key respects, it was a policy success, but it was also always a political failure,” said Jonathan Oberlander, a health care historian at the University of North Carolina at Chapel Hill. “And that political failure reflects that partisan polarization, which Democrats and the Obama administration never figured out a way to overcome.”

Despite months of bipartisan negotiations in the Senate Finance Committee, the bill eventually passed Congress without a single Republican vote. It would face unflagging opposition, explosive town hall meetings, angry Tea Party protests and a Supreme Court decision in 2012 that, despite upholding most of the law, weakened one of its central provisions by making the Medicaid expansion optional for states.

Sen. Charles Grassley, a Republican from Iowa who was involved in the initial Finance Committee discussions, said Republicans turned away after Democrats, who themselves were frustrated by the prolonged negotiations and felt they had a mandate, decided to move forward alone.

“It was a take it or leave it, and so basically, we were pushed out of the negotiations,” said Grassley. “And quite frankly, there was a lot of institutional knowledge among Republicans, that would’ve probably prevented a lot of bad things that happened, going wrong. I think it’s a perfect example of trying to do something in a partisan way.”

The Obama administration believed the law would eventually become popular as more Americans felt its benefits. But that strategy was hampered by the fact that the law’s big coverage expansions didn’t begin until 2014. Public opinion on the law remained divided. Republicans voted to repeal or delay part or all of it more than 60 times, always facing the prospect of a certain veto from Obama.

Now President-elect Donald Trump has vowed to kill the law for good, a promise that appealed to many voters around the country.

In Mansfield, once a booming manufacturing town, the Affordable Care Act has brought insurance coverage, new health care jobs and an influx of federal money. All told, nearly 1 million Ohioans are covered under Obamacare. But economic angst in Rust Belt states like this one handed the presidential election to Donald Trump, giving him the power to repeal Obama’s signature domestic policy.

What happens next is an open question.

Kari Westfield helps sign patients up for Medicaid in Richland County, Ohio where Trump won nearly 70 percent of the vote.

As manufacturing plants here have closed, including Westinghouse and General Motors factories, nearly 30 percent of residents have had to enroll in Medicaid, which was expanded in Ohio under the Affordable Care Act.

Since the health law took effect, the share of uninsured patients at Third Street Family Health Services, where Westfield works, fell from 30 percent to 10 percent.

That includes Larry Avery, a 31-year old local basketball coach who has been rushing to get medical and dental care before Trump takes the law away.

“I just thought it was a move that he was doing just to make it harder than what it already is,” said Avery. “If it’s working, if it helps, why would you want to take that away?”

Among those trying to enroll in Obamacare’s expanded Medicaid are Trump supporters Mary and Jim Heenan.

A nurse trying to recover from an opioid addiction, Mary Heenan said she and her husband need help getting back on their feet. And though she acknowledged it may seem difficult to reconcile, Heenan still despises the health law. She said it forced the surgeons she once worked with to provide shoddy medical care.

“I know I’m in this spot where I need help right now from the government,” she said. “But the Affordable Care Act is the worst thing that’s ever happened to this country. And, that’s exactly why I voted for Trump, because I knew Hillary was going to follow in Obama’s footsteps.” 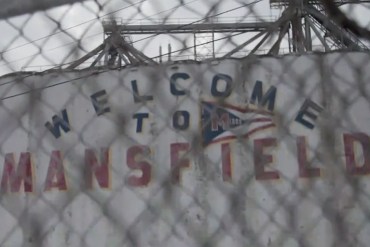 In Mansfield, once a booming manufacturing town, the Affordable Care Act has brought an influx of federal money. (PBS Newshour/KHN)

But John Corlett, president of the Center for Community Solutions, a think tank based in Cleveland, says other voters didn’t take Trump’s promise to repeal the law seriously.

“I think people have a natural inclination to think that when something starts that it’s hard to stop,” Corlett said. “I think a lot of people sort of approached it that way, [saying,] ‘Well, no they wouldn’t do that.’”

Across Ohio, the health law has dramatically reduced the number of people who are uninsured.

At Metro Health in Cleveland, as elsewhere in the country, the influx of insured patients has allowed the health system to provide more primary and preventive care, improving health outcomes for those with diabetes and high blood pressure and cutting costs by nearly 30 percent.

Despite strong opinions about the law, elements of the law remain widely popular — health plans can’t refuse to insure based on pre-existing conditions, cap essential benefits or charge women more than men. And young adults can stay on their parents’ plans until age 26.

Mindy Hedges came to a rally outside Republican Sen. Rob Portman’s office in Columbus to show how vital the law has been for those with medical problems. Before the law, she couldn’t get insurance.

“I’m scared for our country,” she said. “I owe President Obama my life. As a Type 1 Diabetic, I’m uninsurable.”

Before the health law’s protections for pre-existing conditions, insurers could refuse to sell plans to people like Hedges on the individual insurance market.

But there are others, especially small business owners and the self-employed, who are frustrated by what’s been happening in the insurance marketplaces created by the law.

Anietra Hamper is a travel writer who started her own business a few years ago and says the law made a mess of her coverage.

“Every year, there has been fewer providers; there’s fewer plans by the providers that are left, higher monthly premiums, deductibles have skyrocketed, and the benefits have dwindled,” she said.

Those frustrations drove Hamper to vote for Trump who says he wants to keep the law’s more popular provisions and scrap the rest in favor of a less regulated insurance market.

But health care experts say it will be impossible to pay for those benefits without a mandate that all Americans have coverage. Repealing it with no plan in place, they say, will create chaos in the insurance market and catastrophe at hospitals and clinics.

“This isn’t working,” she said. “So, if Donald Trump says he wants to reinstate a free marketplace, where we have more choices, more competition, better care, more affordability, okay! And, like every other American, you know? We have to hope that that’s what we get.”

But even as Grassley and his Republican colleagues lay the groundwork to repeal the law in the coming weeks, he said it’s too soon to lay out what comes next.

“Obviously, repeal is very much what’s going to happen,” said Grassley said. “Whether it’s a transition period that it takes a period of time to get total replacement or whether it’s done incrementally, those decisions have not been made at this point.”

Whatever the outcome, many observers say Obama’s legacy will forever include his ambitious attempt to solve one of the nation’s most intractable problems.

The Affordable Care Act will not simply go down as a footnote in history, said Oberlander, the health care scholar.

“This is a debate we have been having for a century,” he said. “Some of the most gifted presidents in the 20th century tried comprehensive health care reform and they failed. President Obama succeeded in passing this. It will go down as a landmark.”

PBS NewsHour producer Jason Kane contributed to this report. This story was produced by Kaiser Health News, an editorially independent program of the Kaiser Family Foundation.