CONCORD, Calif. — During a 15-minute recess, the elementary school students trooped from the playground toward nurse Catherin Crofton’s office — one with a bloody nose, a second with a scraped knee and a third with a headache.

Kids quickly filled a row of chairs. Staffers brought paper towels for the bleeders and tried to comfort the crying.

“We’re here for first aid, emergency, counseling,” said Crofton of the Mount Diablo Unified School District. “There is always something to do.”

Mount Diablo and other districts around the nation can use all the help they can get. Many suffer a severe shortage of nurses, and money to hire more is scarce.

Last year, Crofton saw 20 to 30 children a day at Cambridge Elementary, located in eastern Contra Costa County in the San Francisco Bay Area. Some were first-timers, others her regulars — those with chronic conditions such as cystic fibrosis who need daily medication. Crofton said there are dozens of diabetic kids in the district, a huge change from 20 years ago, when they were rare.

Before taking a leave earlier this year, Crofton was on site at Cambridge Elementary three days a week and at Meadow Homes Elementary, about six blocks away, the other two weekdays. 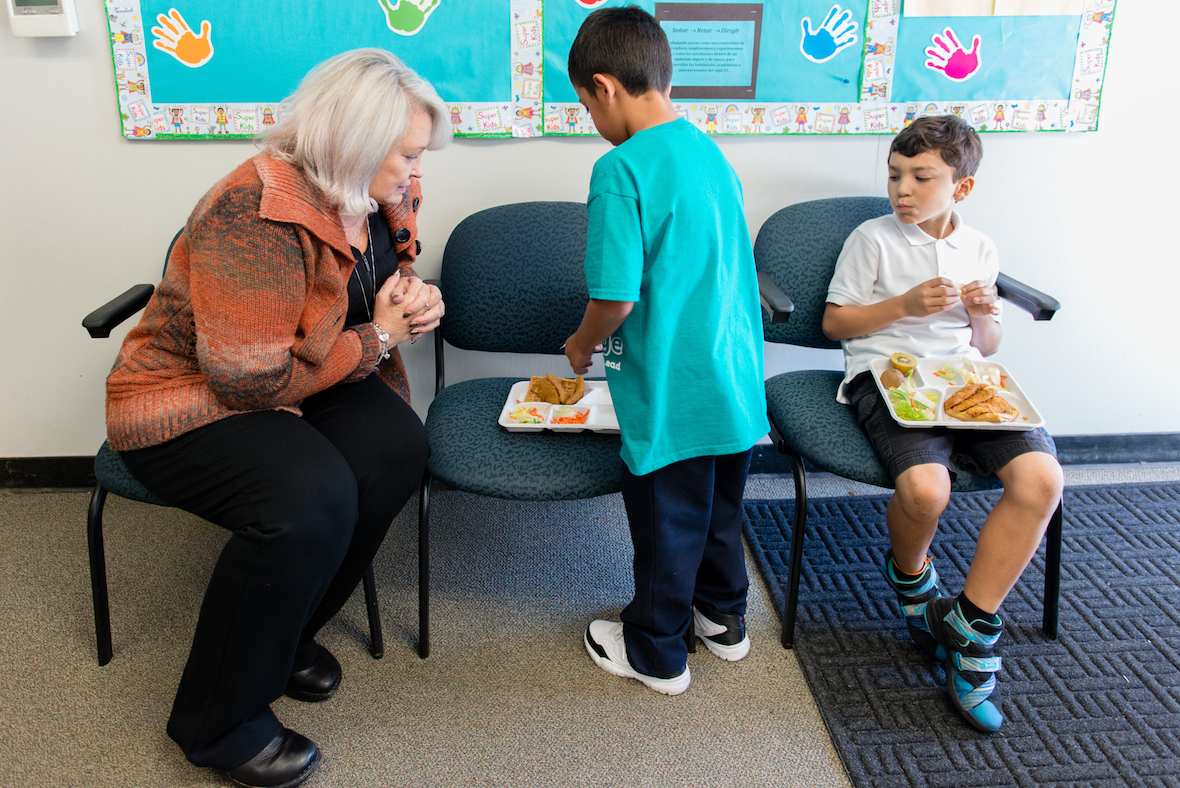 Desperate to fill the nursing gap, the Mount Diablo district partnered with John Muir Health, a local health system of doctors and hospitals, to pay for her position. Other districts are also addressing nursing shortages creatively — and with mixed success — by opening school-based community clinics, conducting video sessions with faraway doctors and even training office staff to dress wounds or check glucose levels of diabetic children.

Beyond tending to minor scrapes, school nurses see many kids with chronic, potentially life-threatening illnesses that need medication and monitoring. Sometimes they are a child’s only regular link to medical care and often are the first to spot emerging disease outbreaks.

Last year, the American Academy of Pediatrics called for a minimum of one full-time registered nurse in every school. Before that, the recommended nurse-to-student ratio had been 1-to-750.

California, the nation’s most populous state, is far from hitting either goal. It had one registered nurse for every 2,592 students in the 2016-17 school year, according to the latest state data. In many districts, one nurse must cover two or more schools. (Districts don’t report their use of licensed vocational nurses, who are not as highly trained but are sometimes hired to fill in the gaps.)

At Mount Diablo, the ratio is 1 registered nurse to nearly 4,000 kids. Figures for the smaller, neighboring district, Antioch Unified, show 1 nurse per 17,326  students.

California, like most states, doesn’t have a specific budget for school nursing, and it doesn’t require schools to have a full-time nurse. Yet schools are obligated to provide certain health services to students, such as vision and hearing tests and medication monitoring.

“Obviously a nurse has to be on board to do that, so we kind of come in the back door that way,” said Pamela Kahn, president-elect of the California School Nurses Organization. 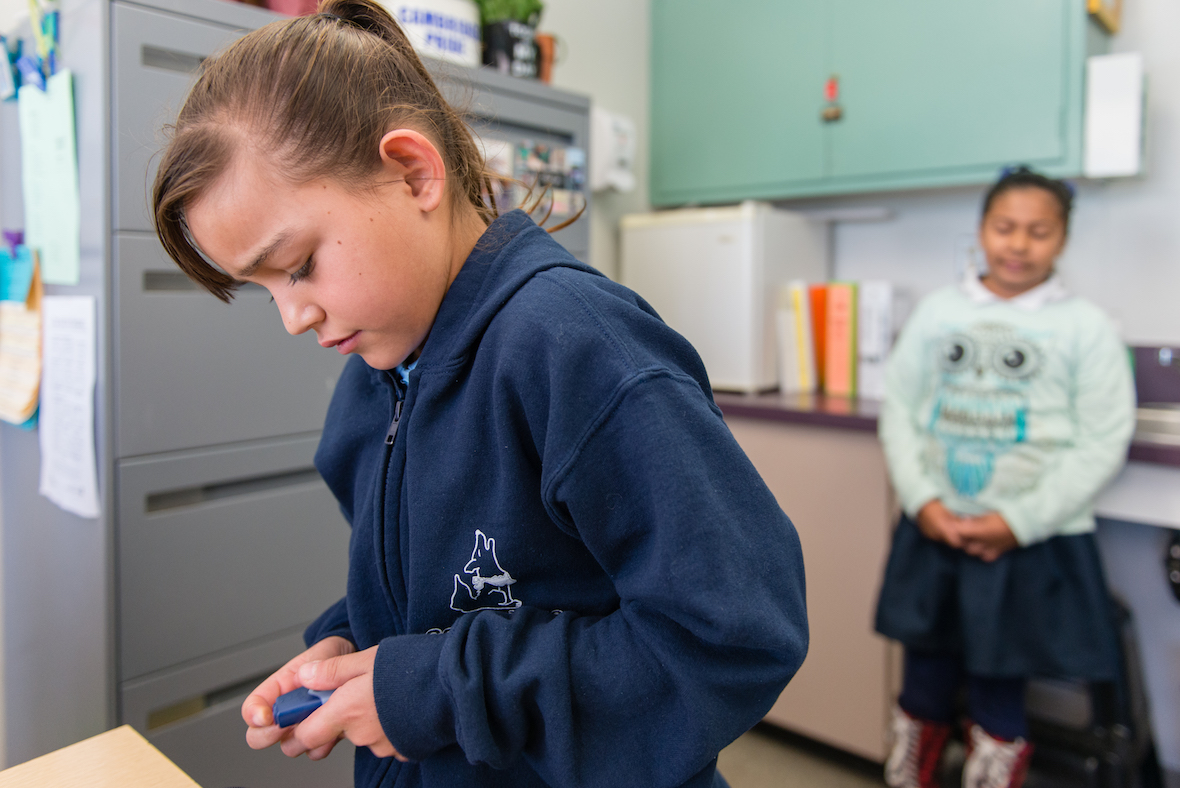 The organization has tried several times to get the state legislature to set minimum nurse-to-student ratios with no luck so far. “When you crunch the numbers, it’s overwhelming what it would cost to provide that kind of service in the state,” Kahn said.

In the meantime, some districts are looking beyond the traditional model of bringing health care to school kids.

Last year, the Sacramento City Unified School District experimented with telehealth, which gives school staffers electronic access to a doctor to guide them, but as of the beginning of this school year, district officials had not decided whether they’d continue.

Telehealth works well if there is a school nurse, not a school secretary, consulting with the doctor, said Nina Fekaris, the president of the National Association of School Nurses and a school nurse in Beaverton, Ore., outside Portland. “It can’t be viewed as a replacement of [nursing] services,” she said.

In some instances, clerks and other school staff have been assigned medical duties in the absence of nurses, with disastrous results. In Washington state, a girl reportedly died of an asthma attack in 2008 under the watch of a playground supervisor when no nurse was around.

Partnerships between school districts and health care organizations are among the most promising approaches because schools don’t have to bear the full costs of hiring nurses.

Besides building goodwill, nonprofit health systems like John Muir can count their contributions of nurses and free student services toward the “community benefits” they must provide to retain tax-exempt status. Under this model, they cannot collect reimbursement from Medicaid or private insurers for seeing the students. 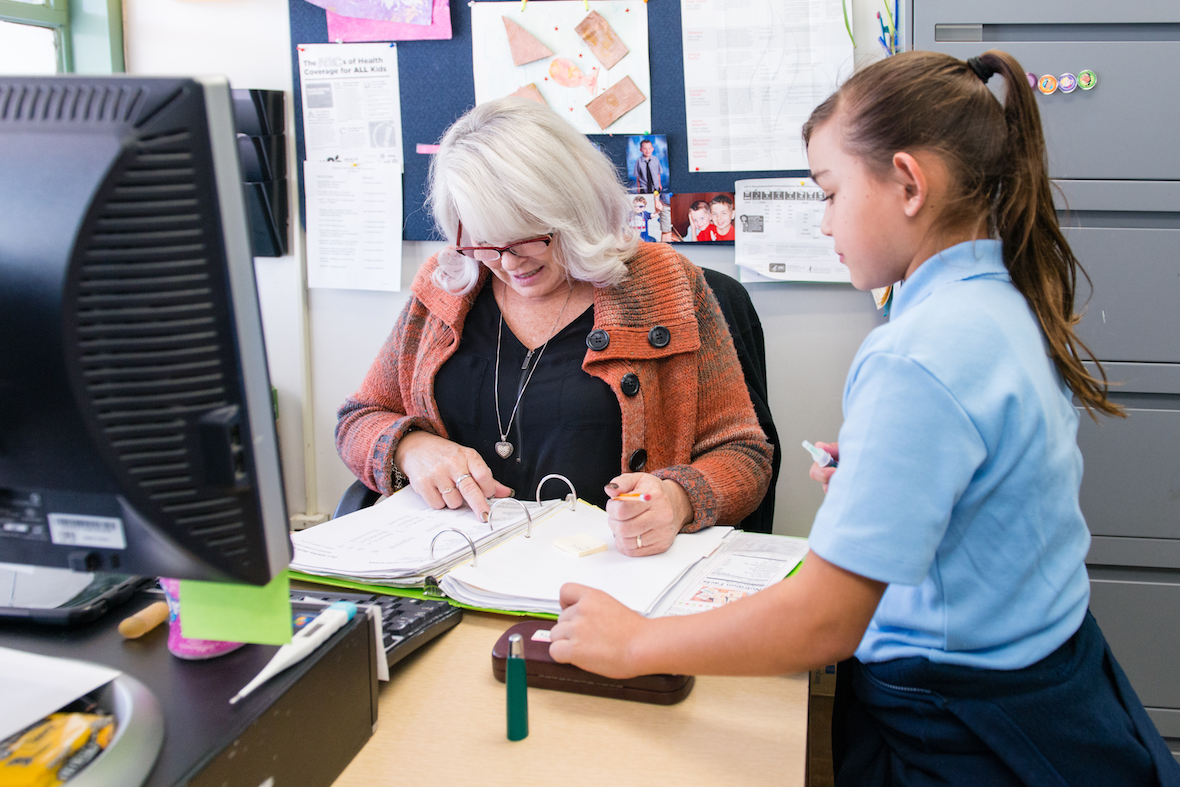 Since 2008, John Muir Health has donated two nurses in schools where the need is the greatest. One of those is Cambridge Elementary, which is in a densely populated area, next to a busy corridor dotted with fast food joints and apartment complexes. Many families are first-generation immigrants and English learners who don’t have an established health care provider, said Chris Grazzini, John Muir’s clinical program manager.

Such partnerships, however, tend to be more popular on the East Coast. Schools in Toledo, Ohio, for example, hired 12 school nurses through a deal with a local health care system in 2015. As part of the three-year agreement, ProMedica, a local nonprofit health system, invested $1.8 million to hire nine nurses. The school district, Toledo Public Schools, pays for the others.

Ann Cipriani, the health coordinator at Toledo Public Schools, said the arrangement allowed the district to attain its goal of having one nurse in each of its 50 schools — meeting the Academy of Pediatrics’ recommendation. “It has made an amazing difference,” she said.

Schools in the Bronx partner with medical organizations to open health centers on campus. One partner is Montefiore Medical Center, which has established 25 school-based health centers, serving about 30,000 children.

Montefiore covers the cost of services by billing Medicaid or other insurance. State grants and private donations also help. The medical center is responsible for providing a doctor, nurses and a mental health provider at each center.

Similarly, Fresno Unified School District in California’s Central Valley aims to have seven health centers on campuses operated by Clinica Sierra Vista, a local group of health clinics and Valley Children’s Health Care. The first opened in 2014 and draws close to 500 visits a month. A second is scheduled to open next year.

Even with money in place for clinics and additional nurses, however, finding qualified professionals to fill the positions can be tough.

The 10-month work schedule is great, said Gail Williams, director of student health services at Fresno Unified, but it’s tough to compete with hospitals open year-round, 24/7. For a nurse, especially one with student loans to pay off, those jobs can be more enticing.

One Nurse Per 4,000 Pupils = Not The Healthiest Arrangement