With its current waiver, California successfully expanded Medi-Cal, its Medicaid program, and launched the dual eligibles demonstration project. That federal-state agreement — known as a Section 1115 waiver — is due to expire in October 2015, but that doesn’t mean the state is done with it.

State health officials have formulated a new plan, a multifaceted proposal for payment and delivery system reforms under a new federal waiver they hope will be ready to start when the current one ends. They plan to submit the new proposal to CMS in February.

The current waiver deals in large part with enrollment issues. The new proposal takes the next step by focusing on changing the health care delivery system, according to Mari Cantwell, chief deputy director of health care programs at the Department of Health Care Services, which oversees Medi-Cal.

“The goal is to transform the way we pay for care,” Cantwell said.

Payment reform is just one aspect of the proposal, Cantwell said. Officials also hope to use some of the resulting shared savings to fund transitional housing and address workforce issues.

“The way I think about it is, this is all about shifting the focus away from just cost and coverage and is really looking at improving the health of the population,” Cantwell said.

Ambitious Plan To Be Submitted by February

The idea behind the new federal waiver application is to take innovative approaches to achieve the aims of federal health reform, Cantwell said.

The proposed pilot projects include:

“We don’t know exactly how it will look in the end,” Cantwell, said. “But what we do know is it will increase health and reduce costs. So [federal administrators] should be very interested in that.”

Two initiatives — transitional housing for some people just released from hospital treatment and workforce development — need funding from other sources. DHCS officials are loathe to tap into state general fund money, so Cantwell said those portions of the waiver request would rely on the other shared-savings initiatives to work.

In the past, federal health officials have rejected plans for housing.

State officials are prepared for roadblocks and resistance but plan to push forward.

“The way I think about it is, this is all about shifting focus away from just cost and coverage, and really improving the health of the population,” Cantwell said. “In California, [with the expansion of Medi-Cal] that’s about a third of the entire population. To me, I think everyone should care about that.”

One of the great triumphs of the first waiver, Erica Murray, president and CEO of the California Association of Public Hospitals and Health Systems, said, was the formation of the Low Income Health Program. LIHP helped smooth the transition of 630,000 Californians into Medi-Cal.

“Just as the Low Income Health Program was a huge success in the first waiver, the next waiver has a huge opportunity not to focus on enrollment but to focus on integrated care,” Murray said.

One way is with value-based payments, according to Murray.

“There is a recognition by public hospitals that there is great value in exploring ways to evolve payments, to change the structure of that to encourage more coordinated care,” Murray said. “There’s an embracing in the public health care system of the need to provide services that are more integrated, more coordinated. There are ways to make it more organized, and more ambitious in those efforts.”

When thinking ahead to the model of care that should be in place by 2020 when health reforms need to be self-sustaining, it’s not enough to talk about the importance of shifting to outpatient services, Murray said. There need to be financial incentives to do that, she said.

“We think there is an opportunity to cost-curve here,” Murray said. “Potentially [these waiver reforms] save us dollars. Our financing structure works best when we do not have incentive to fill our beds, that’s what we’ve been working toward.”

That includes the initiative for transitional care and housing, so patients who use services frequently don’t end up back in the hospital, she said.

“That’s an important debate right now. There is that interlocking nature of health care and housing, and how to respond to that in public policy,” Murray said. “California has a real opportunity to push the envelope here.”

Although any proposal would not be approved or rejected by CMS until October 2015, the waiver proposal submission process is long and state officials need to start now, Murray said. 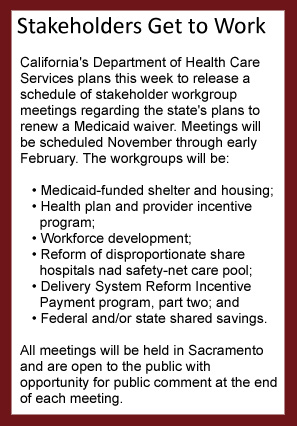 “We would hope that the state would submit an initial proposal by February,” she said, “so we can have a meaningful and robust dialogue with CMS, and so we can have a seamless transition. It’s really important to have full stakeholder input, but at the same time we do need to move quickly.”

In addition to greater enrollment efforts, DHCS also needs to process renewals for the eight million enrollees it had before expansion, plus handle the backlog of expansion applications. Then there’s the duals demonstration project and the rural expansion, as well.

“Despite all the other things on [DHCS’] plate, we think this is incredibly important,” Murray said.

“It certainly is ambitious, but we think this is really important, to reform the payment system,” Cantwell said.

One Waiver Down, One More To Go?