This story also ran on Chico News & Review. This story can be republished for free (details).

One of the final memories Carol Holcomb has of her pine-shaded neighborhood was the morning sun that reflected red and gold on her trees last Nov. 8. That day, she said, promised to be a beautiful one in the Butte County town of Paradise.

So she was surprised to hear what sounded like raindrops tapping her roof a short time later. Holcomb, 56, stepped outside to investigate and saw a chunk of pine bark floating down from the sky.

It was her first glimpse of the approaching wildfire that would become the deadliest and most destructive in California history — one she continues to relive in debilitating nightmares and flashbacks.

The Camp Fire virtually incinerated Paradise, a town of 27,000. It killed 85 people in the region — many of them elderly. Most died in their homes — others while fleeing in their cars or trying to flee on foot.

For thousands of residents, the terror of sitting in traffic jams as the wildfire bore down left emotional scars. “Everyone who experienced this went through trauma,” said Linnea Duncan, a licensed clinical social worker who fled the fast-moving firestorm from her home in Magalia, a community just north of Paradise.

Dr. Sandro Galea, dean of Boston University’s School of Public Health, said: “We would expect to find a high burden of post-traumatic stress disorder and depression.”

Galea, a leading researcher in the field of mass trauma and disaster, said the consequences for individuals can vary depending on factors such as the intensity of their experience, the type of support available to them after the disaster and whether the community comes together in the recovery and rebuilding process.

For Holcomb, it took nearly three hours to escape Paradise as smoke from burning houses, cars and brush turned day to night and cut visibility to mere feet. Barely able to see the road, she got behind a large truck — its tail lights her guide. As she watched the flames devour nearly everything around her, she could hear residential propane tanks exploding like steel-encased kernels of popcorn.

Just as she got out of the flames, her truck caught fire. Holcomb pulled onto the median of the highway and jumped out in time to save herself and her cat. A man she didn’t know told her to get into his truck, and together they made it to safety. In the commotion, she left a backpack next to her burning truck. It contained treasures: her mother’s Bible, her grandfather’s Purple Heart medal from World War I and photographs of both of them.

Nightmares and flashbacks in the immediate aftermath of a disaster are normal, said Barbara Rothbaum, director of a trauma and anxiety recovery program at Emory University School of Medicine. So too are irritability, anger, hyper-vigilance and problems with sleep and concentration. But when these symptoms persist for at least a month, the diagnosis can be post-traumatic stress disorder, or PTSD. First acknowledged by America’s mental health community in 1980, it’s the one mental health disorder predicated on exposure to traumatic events.

For most people, Rothbaum said, the psychological distress will fade. But for others, especially those who avoid thinking, speaking or writing about the event, symptoms may stick around for years, affecting their relationships, their work and their ability to heal.

“It’s very similar to the grief process,” Rothbaum said. “We don’t think there’s any way to the other side of the pain except through it.”

In the general population, Galea said, about 10% of those with direct exposure to a disaster will experience PTSD. But among children, women and those with prior mental illness, susceptibility to disaster-induced PTSD is significantly higher, studies show.

“It’s the magnitude of a disaster that oftentimes can help us to predict how severe the mental health distress is going to be among affected populations,” said sociology professor Lori Peek, director of the Natural Hazards Center at the University of Colorado at Boulder.

And in Paradise, the “magnitude of the disaster” was staggering.

Paradise officials report that 9 in 10 homes burned down in this middle- to low-income town popular with retirees.

“It’s been pretty traumatic,” said Elissa Crane, who lost the low-income rental she shared in Paradise with her husband and her disabled adult son. The family has been staying in an insurance-paid hotel since November as they search for an affordable apartment for themselves and their two cats. And now, with temporary housing insurance about to run out, they’re considering a permanent move to Idaho.

“We are animals and our nests are very important to us,” Rothbaum said. “One of the most stressful things you can do to an animal is mess up its nest.” 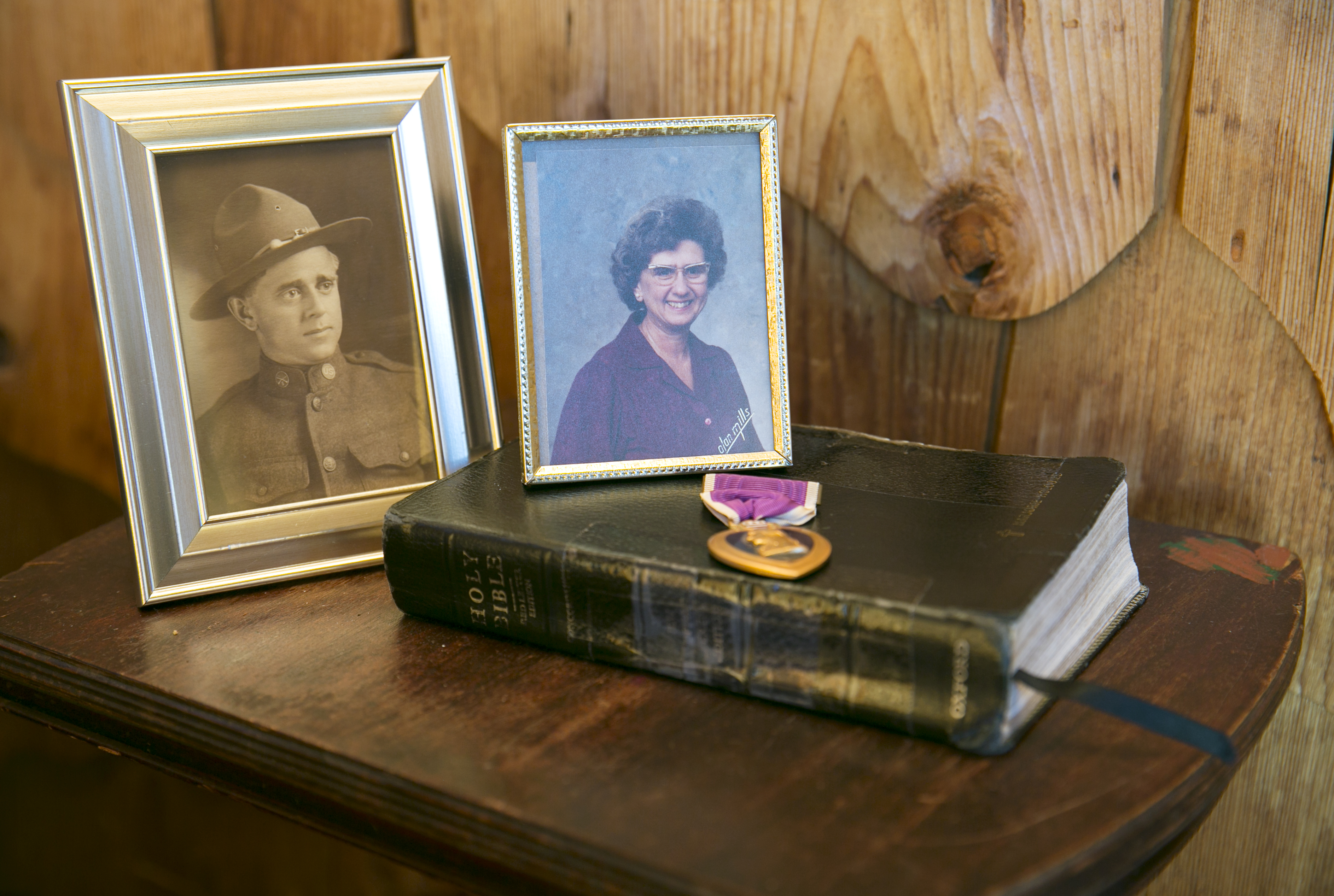 In the commotion of evacuating from Paradise, Holcomb lost a backpack containing her mother’s Bible, her grandfather’s Purple Heart medal from World War I and photographs of both of them. Thanks to a good Samaritan, she recovered the backpack containing the family treasures. (Michelle Camy for KHN)

Martha Bryant’s house was one of three remaining in a ravaged neighborhood. On her first visit back, she said, she failed to recognize her own house.

She continues to have nightmares; traffic jams trigger panic attacks.

“What I remember the most is just the sheer fear and panic and my heart pounding,” said Bryant, 60, a third-generation resident of Paradise. “Nobody was moving. And I was just screaming, ‘Move! Move! Get going! Move!’”

She said she knows she needs counseling, but life’s been too full of other decisions to seek it out.

In a 2017 study published in JAMA Psychiatry, Galea and colleagues found that one way to address the psychological consequences of disaster is through “stepped care,” which screens survivors as they move through the recovery process, “so that you can direct them to the care they need, when they have that need,” said Galea.

Providing regular mental health treatment — including practical approaches like cognitive behavior therapy — is one of two key steps to recovery. The other, Galea said, is through restoring a community’s social and economic functioning.

Sociologist Peek, who studied PTSD after Hurricane Katrina, said for those who want to return to Paradise, participation in community-wide conversations is essential.

Virtual town halls helped people displaced by the 2005 hurricane participate in the recovery, Peek said. “It was those moments of connection and the sense of cultural familiarity that sometimes made a big difference in terms of the emotional healing process,” she said.

The Town of Paradise Facebook page seems to be filling that role. In addition to providing notices about building regulations, safety issues and where to get free drinking water, it’s acting as a public forum where people can participate in live planning meetings and discussions about the town’s future. Social worker Linnea Duncan is part of a group of therapists offering free treatment for Paradise residents.

For Carol Holcomb, though, there will be no going home to Paradise. She is healing — getting treatment for PTSD symptoms and, thanks to a thoughtful person who put the backpack she’d left on the median back in her burned-out truck, she recovered some of her family’s treasures.

But Holcomb won’t rebuild, she said. She is instead looking for a home in a farming community with trees in orchards, which can resist a wildfire. “I can’t live in the forest again,” said Holcomb. “I just can’t.”