SAN DIEGO — When Mary Prehoden gets dressed for work every morning, her eyes lock on the bite-shaped scar on her chest.

It’s a harsh reminder of one of the worst days of her life. Prehoden, a nurse supervisor at Scripps Mercy Hospital San Diego, was brutally attacked last year by a schizophrenic patient who was off his medication. He lunged at her, threw her to the ground, repeatedly punched and kicked her, and bit her so hard that his teeth broke the skin and left her bleeding.

The incident lasted about 90 seconds, but the damage lingers.

“Even if I didn’t have a scar, the scar is in your head,” said Prehoden, 58. “That stays with you for the rest of your life.” 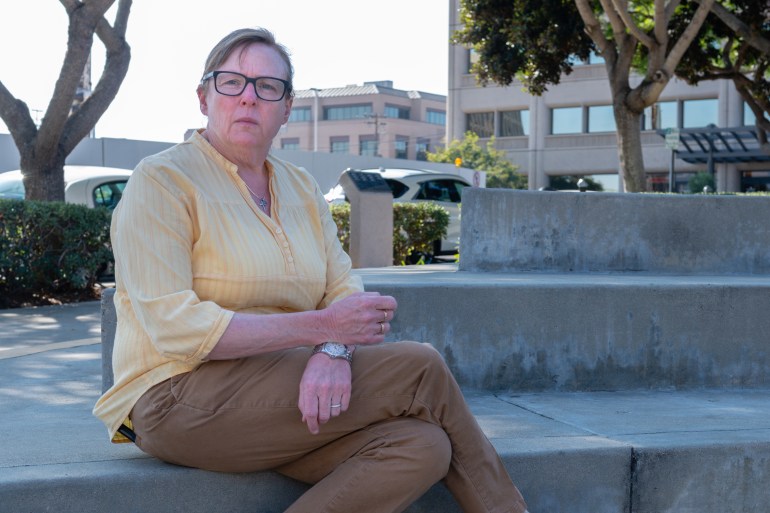 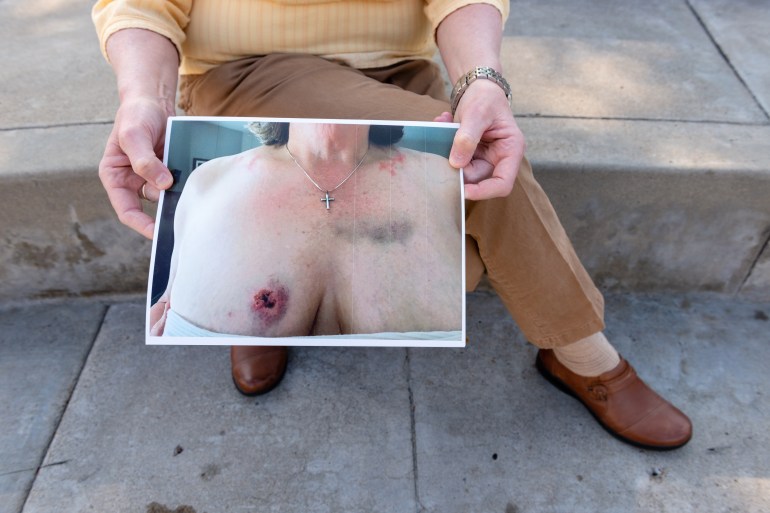 Violence against health care workers is common — and some say on the rise.

According to the Occupational Safety and Health Administration, workplace violence is four times more common in health care settings than in private industry on average, yet it still goes underreported. Patients account for about 80% of the serious violent incidents reported, but stressed-out family and friends also are culprits. Co-workers and students caused 6% of the incidents.

In a 2018 poll of about 3,500 emergency room doctors conducted for the American College of Emergency Physicians, nearly 70% said violence in the emergency department has increased in the past five years.

In California, a state law requires hospitals to adopt workplace violence prevention plans and report the number and types of attacks to the state. The state then compiles the data into annual reports.

In the first full report, 365 hospitals tallied 9,436 violent incidents during the 12-month period that ended Sept. 30, 2018, ranging from scratchings to stabbings. Workers were punched or slapped in one-third of the assaults and were bitten in 7% of cases.

“I don’t know that you ever expect to have to defend yourself at your workplace,” Prehoden said. “It’s not anything you’re prepared for.”

Scripps Mercy Hospital officials have made a number of changes to help protect employees from what they refer to as an epidemic of violence. They’ve launched a “rapid response” team made up of staff members who try to defuse potentially violent situations. And the hospital has introduced a behavioral screening tool to help identify patients prone to violence. When patients get flagged, they must wear a green wristband, and a green peace sign is placed on their door. 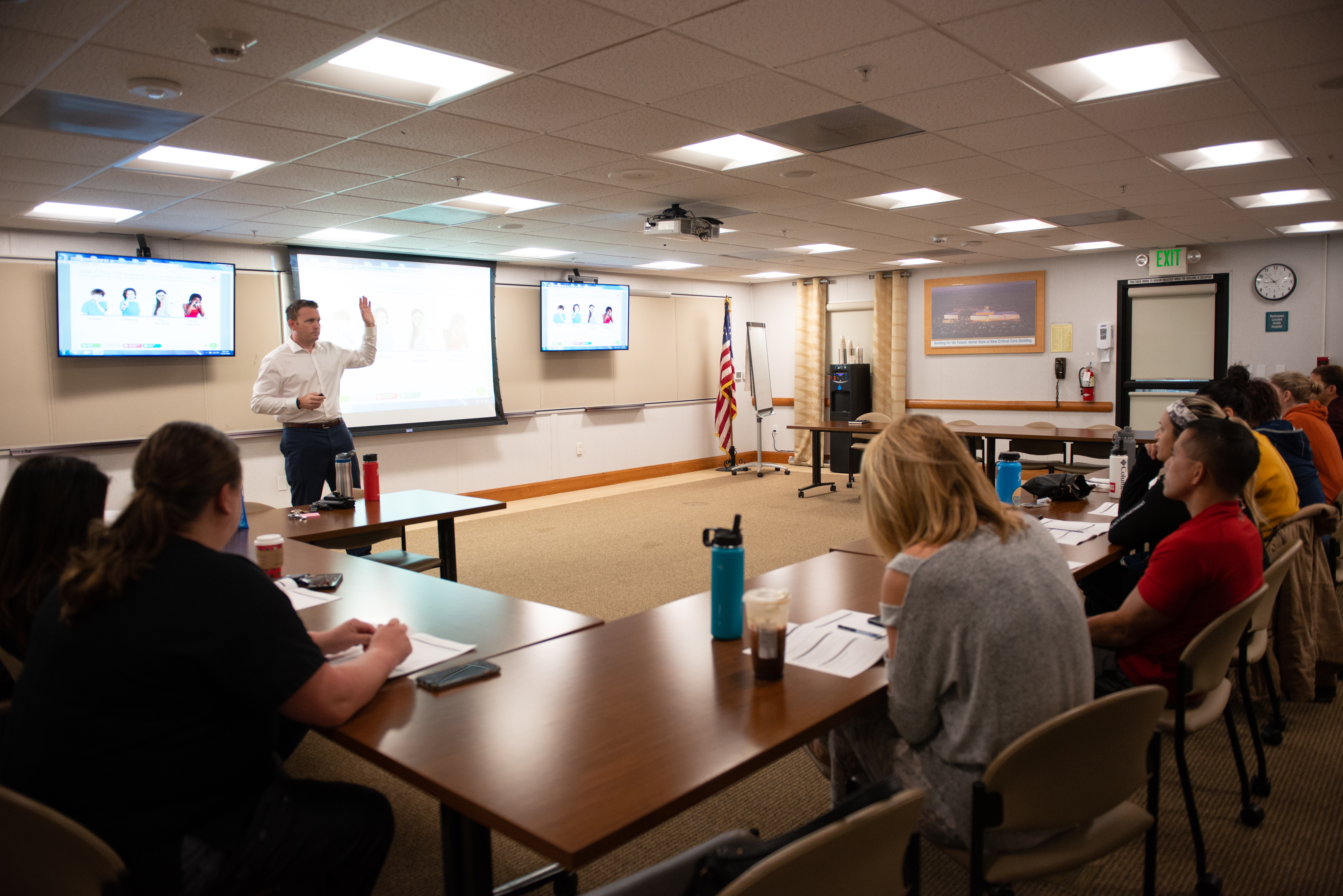 Security manager Ryan Sommer leads a de-escalation training for hospital staff at Scripps Memorial Hospital Encinitas. Sommer asked participants to raise a hand if they have been assaulted on the job. Nearly all did.(Heidi de Marco/California Healthline)

On one recent morning, about 20 employees at the Encinitas facility learned how to deter an agitated and combative patient. One tip Sommer shared: Behavior influences behavior, so listen with empathy and establish a personal rapport with the patient. And, he told them, don’t lose your cool; the goal is to get agitated patients to calm down. 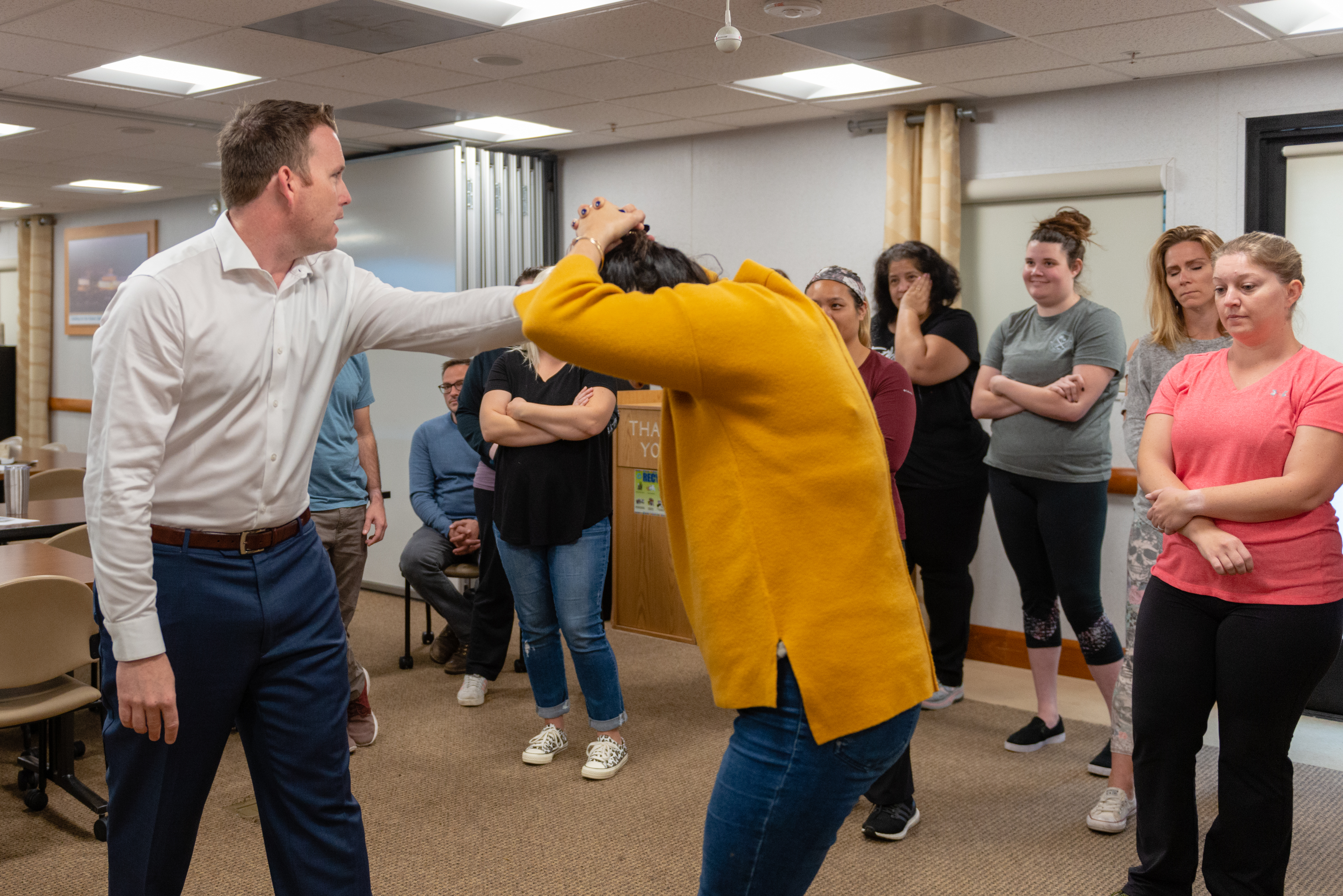 Sommer also taught self-defense tactics should the situation escalate. In groups of two, employees practiced how to disengage from a hold and block strikes from an attacker.

“How many of you have been attacked on the job?” Sommer asked. Nearly all the participants raised their hands.

“This happens daily. They get punched, scratched, spit on, yelled at,” he said later.

Sommer said the number of violent incidents at the Scripps hospitals is rising and the injuries are becoming more severe. 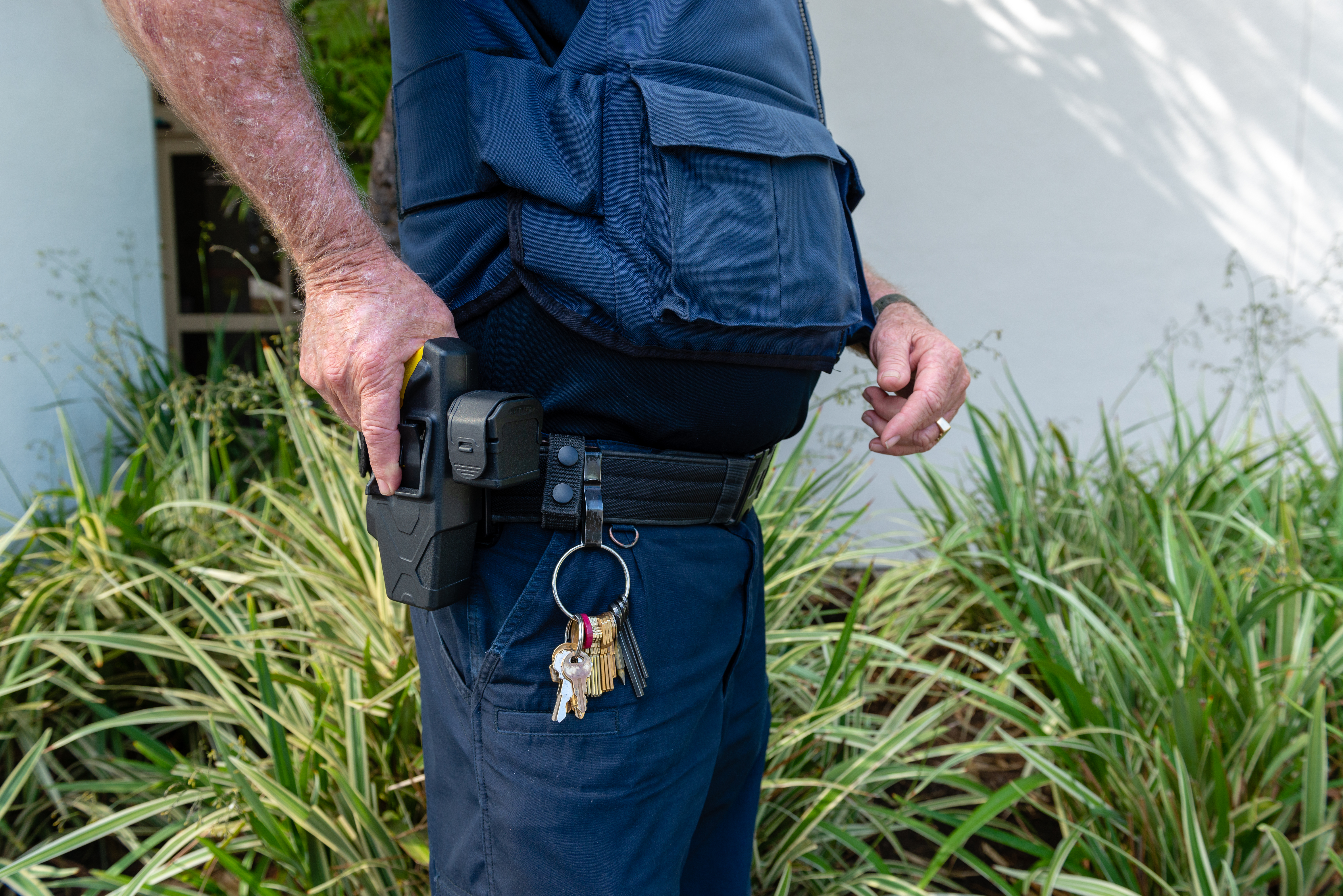 All Scripps Memorial Hospital’s security guards have been armed with stun guns and stab-proof vests for the past year due to what the health system calls an epidemic of violence against its workers. “We hope they work as a deterrent,” says security manager Ryan Sommer.(Heidi de Marco/California Healthline)

Since earlier this year, security guards at all Scripps hospitals have been armed with stun guns, said Janice Collins, a spokeswoman for Scripps Health. They wear stab-proof vests and are stationed strategically around the facilities. The stun guns are used when security guards believe they are needed to protect life, Collins said. Prehoden’s situation would have met that criteria, she said.

The efforts vary by location and risk, Blanchard-Saiger said. 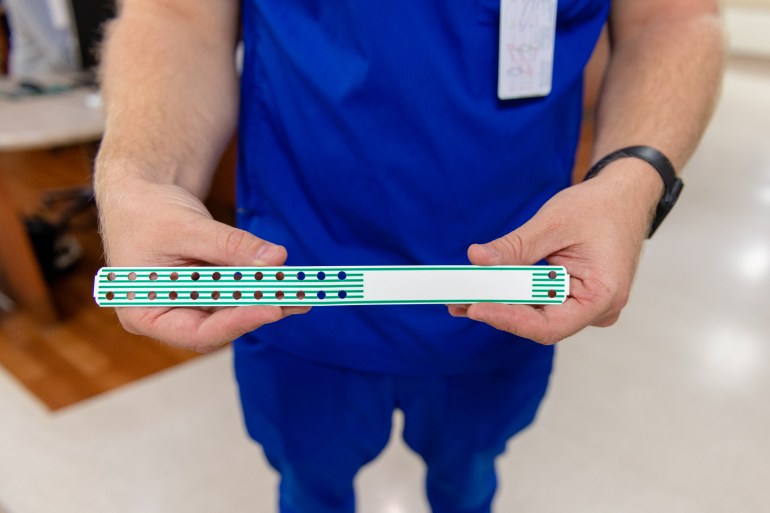 Scripps hospitals use a behavioral screening tool to help identify which patients might be prone to violent behavior. If a patient gets flagged, they must wear a green wristband upon admission and a green peace sign is placed on their door.(Heidi de Marco/California Healthline) 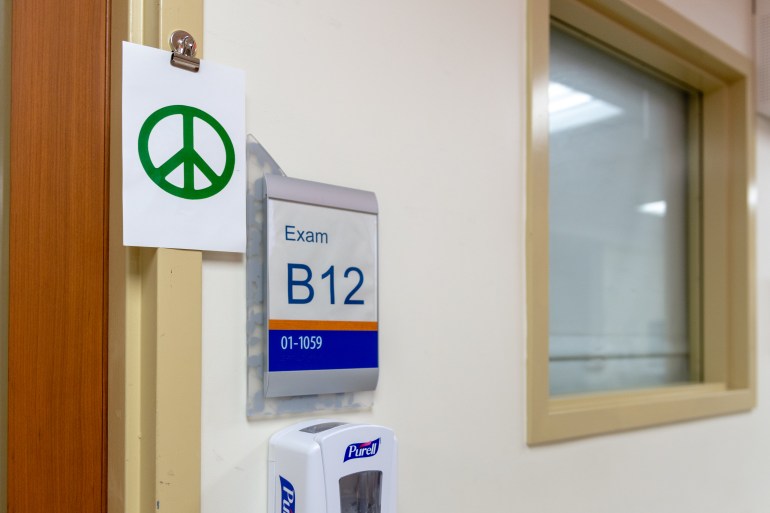 Additional support from local law enforcement would make a difference, she said. “Unfortunately, I’ve heard plenty of stories where they don’t even come to the hospital,” she said. “They’re short-staffed, underfunded. They’re prioritizing.”

Prehoden has attended the de-escalation training and is now on the rapid response team at Scripps Mercy Hospital.

It took her three weeks to return to work after she was beaten in August 2018. A nurse for almost 40 years, she admits being a little on edge now, and feels as if her attacker robbed her of her confidence. He served six months in jail for the attack.

“This cannot be the new face of nursing,” Prehoden said. “We can’t afford to lose our staff because somebody decides not to take his medication.”