She has a 3-year-old son with disabilities and wants to make sure her concerns are heard.

Gideon has autism, epilepsy and neurofibromatosis, a neurological condition that causes tumors to grow along nerve pathways. He has undergone several brain surgeries and wears a helmet to protect his skull.

For children like Gideon, a state program known as California Children’s Services (CCS) covers medication costs, some medical equipment and accommodations in the home, such as wheelchair ramps. The program also helps families manage their children’s care, which in Gideon’s case involves 10 different doctors.

Ford and her family are mostly satisfied with the services they receive from CCS. But the Department of Health Care Services is in the initial stages of revamping the 89-year-old program, which largely would mean shifting about 190,000 children into Medi-Cal managed care plans over the next five years. Lawmakers next meet on Aug. 10 to discuss the changes.

The department has said the switch is intended to streamline care, making it more efficient. Under managed care, plans are paid a fixed amount per patient to coordinate all of the person’s medical services.

Gideon’s family and many others worry that the proposed changes to the program could disrupt their children’s care by hampering access to the specialized treatment and services that they have carefully arranged and come to depend upon.

Intense scrutiny and feedback from the families has caused state lawmakers to delay and amend some of the Department of Health Care Services’ plans for the CCS program.

California Healthline interviewed Ford about her experience with CCS and her concerns about the program’s transformation. Her comments have been edited for length and clarity.

Q: Can you describe what a regular day is like for you and Gideon?

Gideon gets up around 6:45 a.m. Sometimes he sleeps through the night, and sometimes he doesn’t. He sleeps in a medical bed, similar to what he would have in a hospital.

The first thing I do in the morning is take a look at his GT stoma [surgical incision for a feeding tube that goes directly into stomach]. I have a number of different medications for him, depending on what I see that morning — steroid and anti-fungal creams, for example. 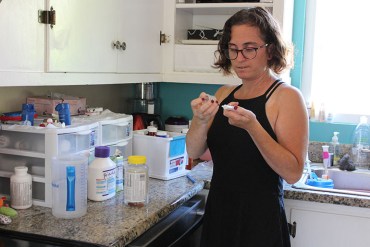 Elana Ford, 37, goes through her son’s medication at their El Cerrito, Calif., home on Aug. 4, 2016. (Ana B. Ibarra/California Healthline)

We get him dressed and transfer him to the main room. Depending on how my back is feeling, I’ll carry him over or bring his wheelchair in here.

We sit him on a different chair and he gets hooked up to his feeding pump. Then we head over to kitchen, also known as medicine land. He has a bunch of different meds that he takes throughout the day.

Then he goes to school for three hours — an intense intervention program. After that, depending on the day, he has swim therapy, physical and occupational therapy, equine therapy and speech therapy. And I spend a lot of time talking to social workers and doctors. We don’t really have time for much else.

Q: How has the California Children’s Services program helped?

CCS is like magical health insurance. Because of CCS, I have help from expert doctors and therapists who can help figure out things like what the right equipment is for him. The wheelchair is one example. This helps him access his community. [CCS] helps with copays and many other costs. Without CCS, it might take us weeks to see the specialists we need to see.

Q: How do you think the planned switch over to managed care will affect your child’s care?

My concern is that doctors aren’t all going to want to be part of this system and that [Gideon] may lose the doctors who care for him right now. Losing that institutional knowledge will absolutely lead to worse health outcomes for him. To me, the only thing that makes sense is that Gideon see his current doctors until he is too old to see them. 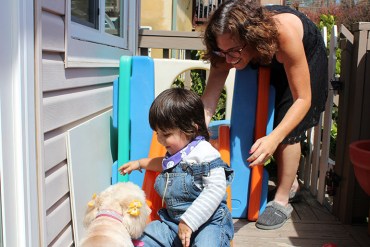 Also, having to suddenly navigate a huge, complicated system — I am afraid it’s going to be like it is for me in [my own] managed care plan. When I need something, I call an 800 number, speak to one person and then another, and verify paperwork. I’m concerned about having to go through those machinations for his medical care when his stuff is much more time-critical and 10 times as complex.

The coordination of his doctors and specialists — it’s pie in the sky to think that something like that could be created in a managed care system. [The Department of Health Care Services] says the coverage is going to be the same, but I’m not sure.

I think sometimes policymakers and shapers have good intent, but they don’t understand how it’s going to look on the ground. They’re just overly optimistic about how this is going to work because they don’t live this day-to-day life.

Q: Do you see any benefits to the transition?

The goal of the new model is to simplify and streamline care, and yes, it would be nice to not have to work with the regional center [for disabled children] and the school district and CCS, but maybe that’s just what it has to be because this is a complicated child.

Q: What perspective have your child’s doctors shared with you on the CCS revamp?

In my experience, doctors are focusing on their patients and not on the politics. I think many [would] rather not get involved in the discussion.

Q: Legislation to guide the Department of Health Care Services in CCS’s transition into managed care recently was changed to address concerns from parents and children’s advocates. Have those changes given you some peace of mind?

The timeline of the transition is much more spread out, which is good. We’re not talking about this happening next January anymore. I think what is done slower is more likely to be done right because there is more time to scrutinize. That was something that made me really happy. The last amended version of the bill also includes case management, which is a big help.

It also seems like [policymakers] are trying to come up with a way to define what success looks like. And while it doesn’t seem like they agree yet, at least we agree that such a definition should be established before moving forward. I think we’re finally having some of the right conversations.

Q&A: How Will Seriously Ill And Disabled Children Fare In Medi-Cal Managed Care?