For most of his life, Marco Tapia viewed exercise as a way to stay in shape. He played soccer growing up. It was recreation, and an opportunity to hang out with his friends.

But since Tapia was diagnosed with schizophrenia four years ago, physical activity has taken on a new, more urgent value for the 28-year-old.

A new study by researchers at UCLA’s Semel Institute for Neuroscience and Human Behavior shows that regular aerobic exercise has significant benefits for young schizophrenia patients, such as Tapia.

The research reveals that an intensive routine of both physical and mental exercises, especially in the early stages of schizophrenia, can help repair the deficits in memory, problem solving and social intelligence that are associated with the illness.

Tapia was part of a 10-week pilot study at the Aftercare Research Program, a clinic at the Semel Institute. He and his family found out about the free program after an episode of schizophrenia landed him in the hospital in 2012.

The details are not clear to him, but Tapia recalls hearing voices telling him the food his mother was cooking was poison, and he remembers that he refused to eat it. He started running laps around his Van Nuys neighborhood, because he thought someone was chasing him. His mom and younger sister, worried and clueless about what was happening, called the police. They feared he was on drugs.

The police took Tapia to the station, and he was later transferred to a Torrance hospital where he remained for two weeks.

A few weeks after he was stabilized, Tapia joined the Semel Institute pilot study, which combined physical exercise with medication and computer-generated memory games.

An article appearing in the current issue of Schizophrenia Bulletin, an academic journal, contains the preliminary results of that study, headed by Keith Nuechterlein, a professor at the Semel Institute.

Schizophrenia, estimated to affect about 1 percent of the U.S. population, is a mental disorder that disrupts people’s behavior and thoughts. Like Tapia, people with the disease can suffer from hallucinations and often become withdrawn from family and friends.

Nuechterlein explained that while antipsychotic medication can stop the hallucinations, it does not reverse the damage caused by schizophrenia.

Past research has already shown that computer-based brain games are beneficial in reversing one-quarter to one-third of schizophrenia-related deficiencies in memory and thinking ability. But the new findings show that these benefits increase substantially when combined with aerobic exercise, Nuechterlein said.

Exercise that raises the heart rate, he explained, causes the body to release a protein known as brain-derived neurotrophic growth factor. This protein stimulates the brain’s center of learning and long-term memory. It also helps increase the connections between neurons, which is where learning occurs and memories form.

“What’s striking to us is the power of combination,” Nuechterlein said. “Both [brain games and exercise] done separately help somewhat, but when done together, the boost in cognitive function is greater.”

Rimal Bera, a clinical professor of psychiatry at UC Irvine, said he is not surprised by the study’s findings. Lifestyle changes, including a boost in physical activity, can be of great benefit to  schizophrenia patients and people with other mental illnesses as well, he said.

Many mental health professionals takes into account such factors as diet, exercise, surroundings, and social interactions when tailoring a person’s treatment, Bera said.

He said exercise helps schizophrenia patients in the same way it helps people without the disease: “Their mood improves, and when people feel better about themselves, it is easier to guide them.”

In the Semel Institute pilot study, one group participated in computerized cognitive training, while a second group did the same computer training in addition to 150 minutes of exercise videos a week.

The patients completed a variety of tests, including a dot-to-dot drawing. The completion time for the group that exercised dropped from 37 to 25 seconds — not too far from the average completion time of 22 seconds among people without schizophrenia.

In a second and ongoing study, 32 people who experienced their first schizophrenic episode within the last two years were put through similar computer-based training. Half of them also engaged in aerobic exercises led by physical trainers.

Workouts were a combination of jumping jacks, lunges, running, and other types of cardiovascular exercise. The exercises don’t require special equipment and can be adapted almost anywhere, Nuechterlein said. The participants’ heart rate and calories were monitored.

The researchers found that cognitive tests among those doing the physical exercise improved three times more than those who were only doing the computer training. 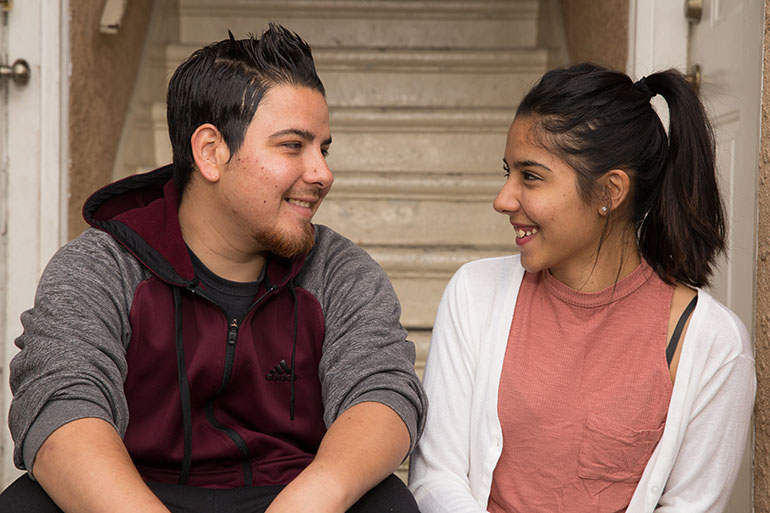 Tapia and his sister, Alma, 24. Tapia’s family noticed his improvement from the exercise and computer training. (Courtesy of the University of California, Los Angeles)

Joseph Ventura, a clinical psychologist at the Semel Institute, who interacts with patients during the exercise and training activities, said most people who come into the program are young, mostly in their early 20s — the typical age for schizophrenia onset. Most of them have stopped going to school or work and show a lack of engagement and spontaneity.

“Improvement may be a little tougher for people who waited longer,” Ventura said, emphasizing the importance of early intervention to alter the course of schizophrenia.

Tapia, who started the program only two months after he was hospitalized, was a prime candidate for it.

Ventura said he notices “remarkable improvements” in patients who go through the program. Their attitudes improve and their anxiety diminishes. The program also promotes social interaction, which is essential for them to assimilate back into society, he said.

Patients also have access to support services, including a case manager with whom they discuss short and long-term goals.

Tapia’s family has also noticed his improvement. Four years after his breakdown, the family has a better understanding of his condition.

His younger sister, Alma Tapia, said that before her brother became ill, their first-generation Mexican family had only heard the word schizophrenia but not understood what it meant. They did not know what the illness entailed or what it portended for Marco’s future.

Their mom now shares their story in support groups for other families going through similar experiences.

Marco Tapia feels he is returning to his “normal self” — the sociable young man he was before schizophrenia struck him. He said that when he first found out about his illness, he refused to tell any of his friends. He was afraid of how they might react. But he has learned to accept his condition and finds it helpful to share his story, he said.

Tapia has not had a second schizophrenic episode. He works full-time and runs regularly.

“I thought exercise was just good for the body. I never expected it to be good for the mind,” he said. “The importance of exercise has gone up in my book.”