SACRAMENTO, Calif. — Yang Vang, a Hmong refugee living in Merced, suffers from severe joint pain. She becomes sick with worry when she hears her Medi-Cal coverage might be in jeopardy, and she has battled suicidal thoughts because of it.

Rosalba Villanueva, a farmworker of 10 years who lives in Bakersfield, broke her wrist six months ago when she slipped and fell in a vineyard. Her employer covers medical bills related to the accident, but her other health needs often go unmet because she is undocumented and uninsured.

Eduardo Crabbe, of Stockton, is a single father to Jaylnn, 4. The San Joaquin Valley’s notoriously dirty air worries him because his little girl has asthma and struggles to breathe.

Vang, Villanueva and Crabbe were among more than 1,000 Valley residents who converged on Sacramento Thursday to urge state leaders to invest in their health, first at a briefing with lawmakers and then at a rally on the west steps of the Capitol.

The San Joaquin Valley, which stretches from Kern County north toward Sacramento, is renowned for its agricultural riches. The Valley produces 40 percent of the nation’s fruits and nuts.

But the area is also home to some of California’s sickest people. Valley residents suffer from high rates of diabetes and heart disease, and one-third of adults there are considered obese.

“You can’t be a Golden State if you don’t operate by the Golden Rule … if there are disparities in different parts of the state,” Stockton Mayor Michael Tubbs told the crowd at a rally dubbed “Equity at the Mall.” Attendees toted signs demanding “Health and Justice for All” and calling on lawmakers to “Support the Dream.” 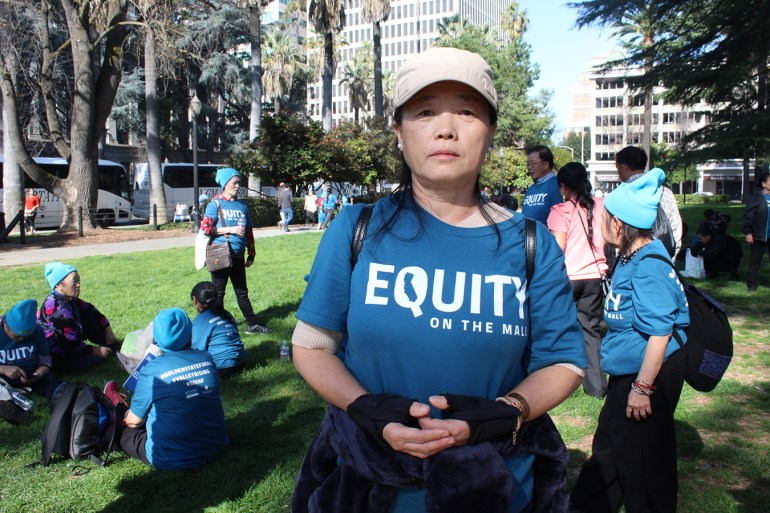 Yang Vang of Merced fears that the federal government will come after her Medi-Cal coverage. Years of operating heavy machinery have left her with arthritis and joint pain, and she can no longer work. (Ana B. Ibarra/California Healthline) 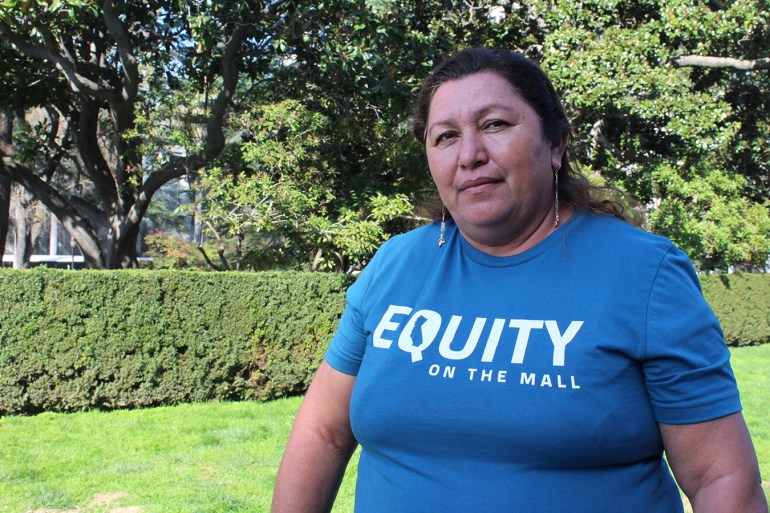 Rosalba Villanueva of Bakersfield woke up at 3 a.m. to make it to Sacramento in time for the rally Thursday. She and other members of the United Farm Workers union came to voice their concerns about the dangerous pesticides field workers are often exposed to. (Ana B. Ibarra/California Healthline)

Jose Gurrola, the mayor of Arvin, a small city south of Bakersfield, told the audience that the discrepancy between the region’s agricultural wealth and the poor health of its inhabitants has created “a tale of two Valleys.”

“Too often [those] who feed the world struggle to feed their own families,” he said.

Villanueva, 51, works in the industry that feeds the world. She woke up at 3 a.m. to catch a charter bus to Sacramento with the intention of speaking out on behalf of workers like herself and her husband.

Before her fall, she had picked grapes. Her left wrist is still swollen and she can barely move it, “but it’s a little better than before,” she said as she pulled out her phone and pointed to a photo of her injured wrist from a few months ago.

Her husband drives tractors through almond orchards, spraying the trees with pesticides. After 12 years of that work, the skin around his eyes is discolored, “like when you burn yourself with hot water,” said Villanueva, who sported headphones during the rally so she could hear a translation of the speeches.

Her husband doesn’t get medical treatment because he doesn’t have health insurance, she said. Because of their immigration status, the couple doesn’t qualify for comprehensive benefits under Medi-Cal, the government-run insurance program for low-income residents, or for subsidized coverage from the state insurance exchange.

A proposal to expand Medi-Cal to all adults, regardless of their legal status, was recently introduced in the legislature. 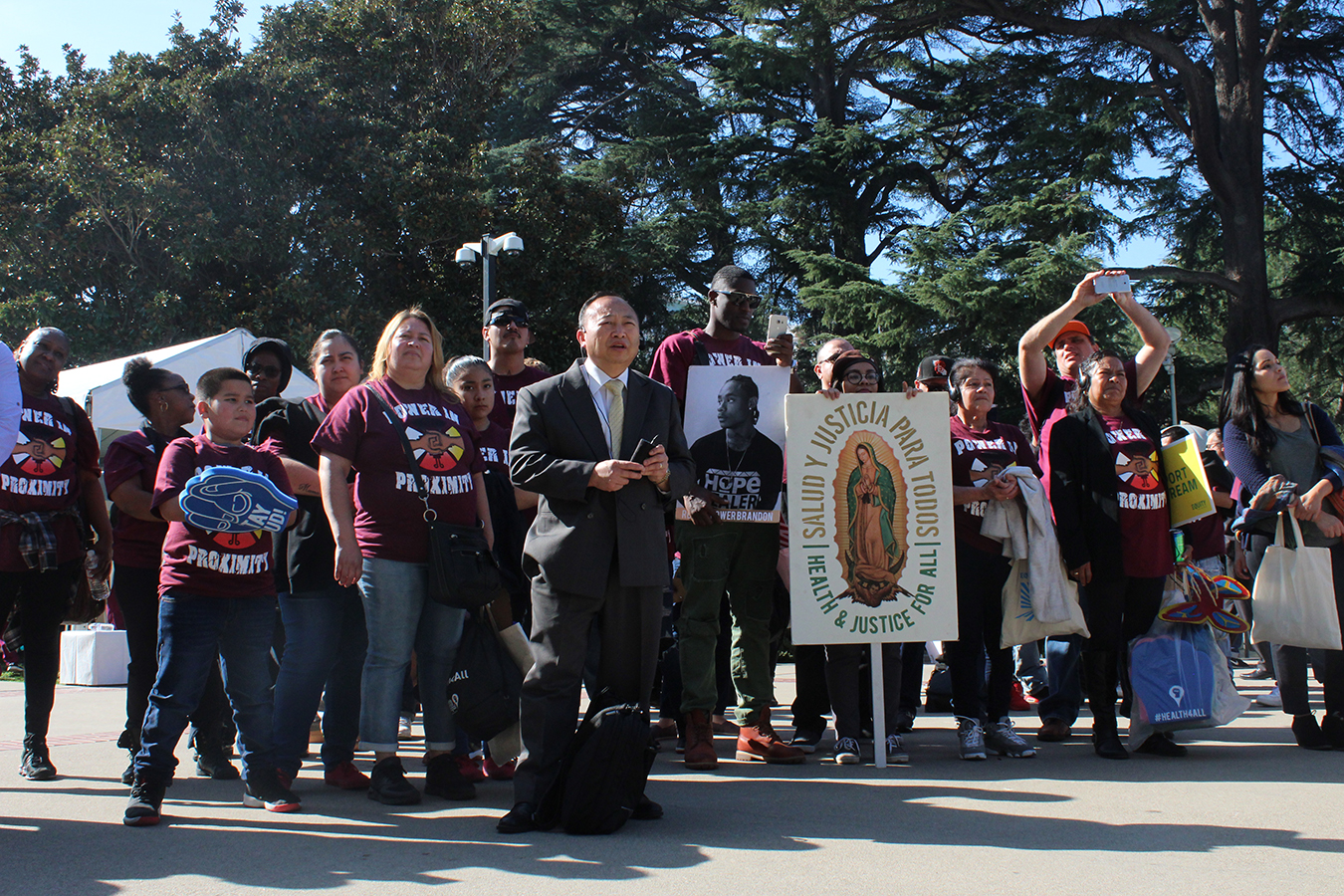 More than 1,000 residents of the San Joaquin Valley gather at the west steps of the state Capitol to advocate for a “Golden State for All.” (Ana B. Ibarra/California Healthline)

When Villanueva and her husband can afford it, they visit a community clinic near their home, she said.

Valley children also breathe some of the most polluted air in the country, the report showed.

Crabbe, 35, is keenly aware of that fact. Jaylnn has an inhaler at school and carries another one with her at all times. She also receives breathing treatments every night.

“The 95206 [ZIP code] has some of the worst air, not many safe parks and a short life expectancy. … Obviously we worry about our kids,” Crabbe said as he watched his daughter paint at a crafts station at the rally.

Vang, 57, is a petite woman who has arthritis from operating heavy machinery at a printing shop where she worked for almost a decade. She wears braces on both wrists.

The pain forced her to stop working, which has left her depressed, she said through a translator. “But at least I have Medi-Cal for now. … What would I do without it?”

Vang said that when she hears about possible threats in Washington, D.C., to health coverage and to immigrant communities, her nerves get the best of her.

“I came here because I want to make sure we will be OK,” she said, “and that California is doing something to protect us.”

Postcard From Sacramento: Residents Rally For A Healthy Valley