The state Senate this week rejected legislation that would have required medical practitioners to notify their patients if they were on probation for serious infractions.

The bill’s supporters said consumers were ill-served by the Senate’s decision.

“Today’s vote means that most Californians will remain in the dark when their doctor is on probation for offenses that could jeopardize their health,” said Lisa McGiffert, manager of the Safe Patient Project at Consumers Union.

Opponents of the bill, including the California Medical Association, had argued that, as written, it would undermine physicians’ rights to due process and amount to a de facto suspension by severely restricting their ability to practice. They also noted that information about doctors’ offenses is already available on the internet.

The Senate Wednesday voted 15-13 for the bill, short of the 21 votes needed to pass it. The Senate then unanimously approved a motion allowing the proposal to be amended and brought up for another vote this week. Its sponsor, Senator Jerry Hill (D – San Mateo), had planned to seek a new vote on Thursday, but he later decided against it after realizing it still would not garner sufficient support.

Hill could reintroduce the measure in the next legislative session, which begins in early December. But a spokeswoman in his office said she didn’t know if he would.

The bill would have required physicians, chiropractors, podiatrists and acupuncturists to notify their patients in a one-page, “easy to read” notice that explained why they had been put on probation. It would have applied to a tiny pool of practitioners – those disciplined for serious offenses such as gross negligence, sexual misconduct, substance abuse or a felony conviction related to patient care.

Some senators who opposed the measure said the language in the bill suggested that doctors and other providers could be forced to tell their patients about unproven allegations against them. 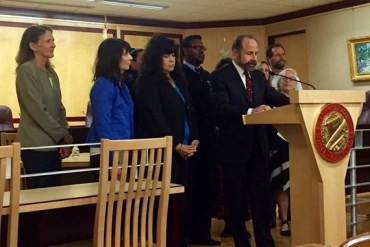 California state Sen. Jerry Hill (D-San Mateo) speaking at a news conference in Sacramento about a bill he authored that would require medical practitioners to notify patients if they are on probation. (Ana Ibarra/California Healthline)

Sen. Richard Pan (D-Sacramento), a pediatrician, said he voted against it for that reason. “This is a significant concern, because I do believe that everyone has a right to due process in this country. It’s an issue of principle,” Pan said.

McGiffert said the due process argument was based on a misunderstanding. Before an accusation is made, there has to be clear and convincing evidence, and every case then gets full due process before doctors are put on probation, she said.

Under current law, clinicians are required to notify hospitals and malpractice insurers when they’re placed on probation. They don’t have to tell patients, but the information is available on the California Medical Board’s BreEZe website.

Sen. Ben Allen (D-Santa Monica), who supported the bill, suggested that practitioners simply be required to tell their patients they are on probation and provide a link to that website, where the patients can look up the reasons why.

However, other supporters of the bill have argued that the medical board website is too difficult for the average person to navigate and creates a barrier for those without internet access.

McGiffert said she hopes Sen. Hill will present the bill again. If so, she and other advocates are prepared to speak with [Senate] members because, “we believe they have been misled in some ways,” she said. “I guarantee you that every single person who voted against [the bill] would want to know if their doctor was on probation.”