If people can age with class, then Harlene Goodrich, 80, of Seal Beach, Calif., and Dorothy Kelly, 91, who lives near Pittsburgh, should be considered aging’s rock stars.

These women — two strangers from opposite ends of the country and the poles of politics — agree on the basics on how to age well:

At a time when women increasingly live into their 90s and more men reach their 80s, the art of aging requires work, thought, planning and, yes, spontaneity.

Learning this art is crucial, as many Americans now have a realistic chance of living beyond 80, said Mark Williams, an attending physician at the New Hanover Regional Medical Center in Wilmington, N.C., and author of “The Art and Science of Aging Well: A Physician’s Guide to a Healthy Body, Mind and Spirit.”

“I don’t think we give enough respect to what it takes to age well — until it happens to you,” said Anne Newman, 62, professor and chair of epidemiology in the Graduate School of Public Health at University of Pittsburgh. “It’s a balance between fighting it and accepting it that requires a great deal of grace and courage.”

And humor. Perhaps, humor most of all.

Goodrich, a former schoolteacher, still meets regularly with her friends who retired from teaching. When the group gathered recently for a holiday cookie exchange, Goodrich — who has had serious back surgery and knee surgery over the past decade — heard several of the women, ages 65 to 83, complaining about their aches and pains. She stopped the discussion and said they would go around the table and give each woman five minutes to complain about her aches and pains. That’s when everyone broke out laughing, recalled Goodrich.

“Humor is an important thing when you reach the point in your life when every week contains at least one doctor’s appointment,” she said.

In 2007, Goodrich and her husband, Michael, went on a safari in Tanzania just before Goodrich turned 70. (Courtesy of Harlene Goodrich)

Humor is no less important to Kelly, who turns 92 in October. “I’ve always preferred to look at the happy things in life,” she says. Perhaps her key to longevity is her ability to laugh at the things so many others stress over. “When I turn off the light at night, I turn off the world.”

Never mind that the two women are polar opposites politically.

Goodrich jetted cross-country from her longtime California home just blocks from the beach to join the women’s march in Washington, D.C., last year. Kelly, a retired pharmacist who lives in the Pittsburgh area, was the first female Republican elected to the town council in her Democratic district — at age 78 — then was re-elected at age 81. And she still helps with voter registration.

It doesn’t matter what political party you support — what matters most is that you care enough to get involved, both women agree.

Both women say the key to aging well is to positively begin the process when you are still young by staying engaged with people and with stimulating activities.

“Aging starts when you’re younger and continues when you’re older,” said Kelly, who lives in a retirement village outside Pittsburgh. For years, Kelly has been known for her cooking and parties. She invited eight family members over for Easter, Thanksgiving and Christmas dinners last year that she prepared in her apartment. She outdid herself one evening around the holidays hosting 20 people from her retirement village for a walnut torte baked from scratch. She still does her own shopping and drives herself to the grocery store. 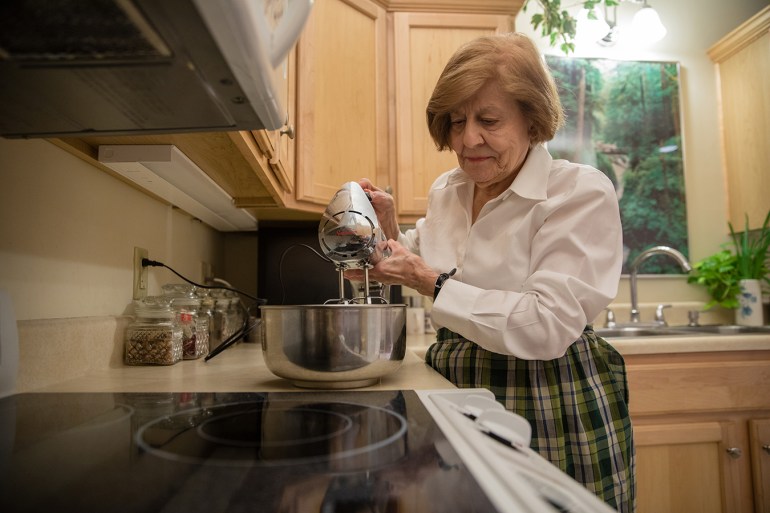 Kelly, 91, is well-known for her cooking and parties. During the holidays, she hosted 20 people from her retirement village for a walnut torte baked from scratch. (Tim Betler/UPMC) 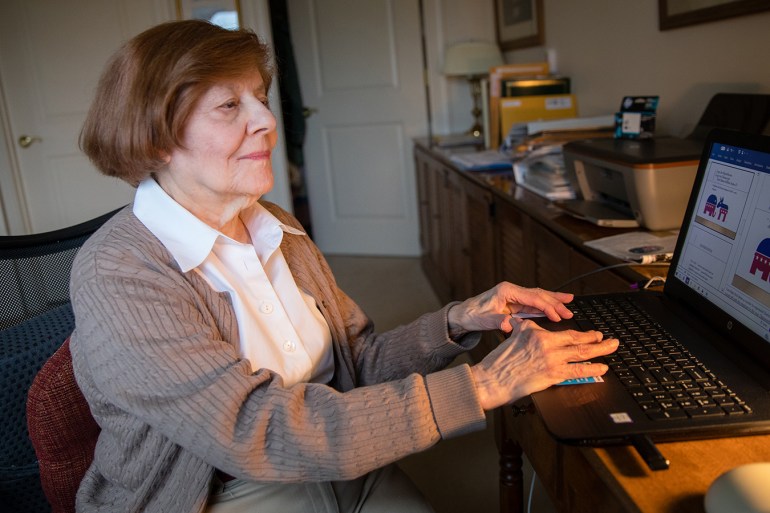 Kelly was the first female Republican elected to the town council in her Democratic district — at age 78 — then was re-elected at age 81. (Tim Betler/UPMC)

Goodrich insists that reaching 80 has not felt limiting but, rather, inspiring. She recently celebrated with her two children and seven grandchildren at a bed-and-breakfast in Kentucky’s horse country. During her 80th birthday dinner, her children surprised her with an Elvis impersonator who crooned “Love Me Tender.”

Goodrich, who at 50 returned to school to get her master’s degree in professional writing from the University of Southern California, has since won several playwriting contests, and those plays were ultimately produced at three different festivals. She also self-published a children’s book at age 60.

“No one suddenly gets old,” Goodrich said. “I think we’re all on the path of life. I may be old in years, but I’m the same person who’s been living the same life. The key is to participate in each stage along the way.”

Sometimes that participation is painful. Both Goodrich and Kelly are widowed. Kelly lost her husband, George, just two weeks before what would have been their 50th wedding anniversary. They met as students in pharmacy school, got married, had two children and traveled the world together.

Goodrich and husband Michael documented the start of their walk from the Mexican border up the coast of California in January 1983. (Courtesy of Harlene Goodrich)

After George died, a grieving Kelly started writing daily letters to him for nearly two years, which helped her through the loss. “I have a whole stack of letters, but I’m not sure if anyone wants to see them,” she said.

Goodrich lost her second husband, Michael, also a schoolteacher, after 33 years of marriage, but not before the two accomplished an incredible feat: walking the state of California. They did this over many years in bits and pieces starting in 1983, and finally completed the long journey from San Diego to the Oregon border in 2005, when Goodrich was 68.

But she’s not done exploring. She’s not done setting goals. She’s not done growing. Goodrich took her family to France’s Loire Valley in 2016. She works with a personal trainer twice a week and walks daily, often to the beach. And she has recently taken up the ukulele, and attends a regular class.

Kelly, meanwhile, regularly lectures on historical figures from Benjamin Franklin to Betsy Ross, then donates her speaking fees for the protection of an 18th-century church that still stands not far from where she lives.

Neil Rosenthal, an author and counselor in the Denver area, has a simple term for what drives Kelly and Goodrich to continue accomplishing such great things in their 80s and 90s: a sense of wonder.

Aging well, Rosenthal said, is something that must be learned. “It’s all about separating out what matters from what doesn’t.” In the end, Rosenthal said, it’s about that willingness — if not desire — to have “fun,” even into your 80s, 90s and, perhaps, beyond.

Fun? Wait. Who equates aging with fun? Well, not long before her spinal surgery and knee replacement, Goodrich went zip-lining when she was 70.

Out of fear — or a sense of too much comfort — the majority of older folks say no to so many opportunities that are put right in front of them, added Goodrich.

Skip The Rocking Chairs For These Rock Stars Of Aging