BURNEY, Calif. — Three years ago, Carol Morris was put in charge of a massive remodel of the new Mountain Valleys health clinic in this small town in eastern Shasta County.

She painted the new exam rooms in muted greens and browns, to reflect the pine forest and cattle ranches outside. And she made a series of equipment upgrades: new sonogram and retina-scanning machines, a designer vaccine refrigerator and a fleet of cushy new exam tables.

“Some of the staff will come in and nap on one at lunchtime,” Morris said, stroking the leather table.

The new community clinic is three times as big as the old one, Morris said. It has doubled the number of patients and staff. All of this was paid for by the Affordable Care Act. “I guess it’s true: Build it and they will come,” Morris said.

Obama’s signature health law provided grants for construction at rural clinics across the nation and increased payments for treating patients on Medicaid, the government’s insurance program for low-income people. The law also expanded who qualified for the program — known as Medi-Cal in this state — adding close to 4 million to the rolls. Many are from rural, heavily Republican counties, like Shasta, Lassen and Siskiyou, where Mountain Valleys clinics operate.

With many of its previously uninsured patients now covered by Medi-Cal, the clinic is making money instead of losing it.

“That was a real boon to us,” said Dave Jones, CEO of Mountain Valleys Health Centers. “We went from struggling payday to payday, to actually having a reserve at this point.”

But with plans afoot in Congress to dismantle the ACA, many clinic leaders like Jones are suddenly feeling vulnerable. Republican leaders want to change the way Medicaid is paid for, which would reduce federal funding dramatically and ultimately leave millions more people uninsured, according to the nonpartisan Congressional Budget Office.

Local economies have a lot to lose, too.

Across Shasta County, the Obamacare Medi-Cal expansion helped create more than 900 jobs in the health care sector and beyond, according to an economic impact report commissioned by Partnership HealthPlan, the insurer that manages Medi-Cal in the far reaches of Northern California.

One of the Burney clinic’s newest hires is Laura Hodge. The clinic had noticed that a lot of patients who had health coverage for the first time were going to the emergency room more — for simple things, like a bandage or treatment for a headache.

Hodge was hired to start a program aimed at reducing overuse of the ER. She sat in her office on a recent afternoon calling patients, asking them if they wanted to participate.

“I would be your liaison with the doctors,” she explained over the phone. “If you feel like you’re not being listened to, or if you have any questions and you don’t feel like you’re being answered, you could come to me.”

The new job is a huge help to Hodge’s family. Her husband is a trucker and they have three kids. Hodge’s salary is critical to keeping the household going.

And that’s critical to Burney. After the logging company, the clinic is one of the largest employers in town. A lot of the money Hodge and her co-workers make goes straight back into the community.

“The grocery store, the tire shop, the gas station,” Hodge lists the places she spends her paycheck. “Our little theater, the bowling alley, Kristi’s Unique Boutique.” 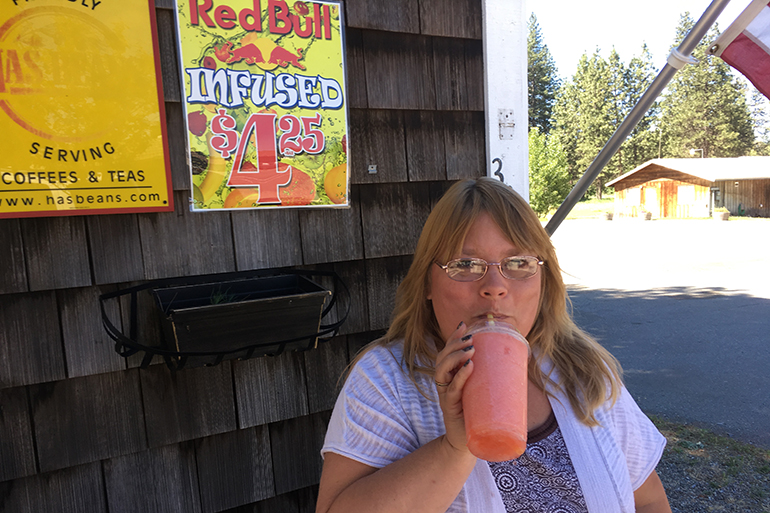 One of Hodge’s favorite haunts is the drive-thru window of the Mt. Burney Coffee Co.

“I will take a blended Red Bull,” she said on a recent visit, mulling over the list of flavors, deciding on the Fruit Loop — club soda with passion fruit, peach and red raspberry syrup mixed in the blender with ice and a can of Red Bull.

“The first time I drank one, oh my gosh,” Hodge laughed. “I went home and I cleaned everything in my house.”

Staffers from the health clinic are regulars at the coffee shop, barista Abby Fristine said: “Most of them come through every day, before or after work.”

The people the clinic has hired in recent years make a difference in a small town like this, said Jones. “I’m sure over the last two or three years it’s been worth a couple million dollars to the community.”

That’s one of the reasons Jones is sounding the alarm on attempts to repeal the ACA.

He and other clinic directors have managed to convince mostly conservative officials, like the Shasta County Board of Supervisors, to formally oppose the Republican health bill, in part because of the potential economic effects. The Siskiyou board is considering a similar move.

Together, both counties stand to lose close to $200 million in business revenue from a rollback to Medicaid funding, hitting not just clinics, but local shops and restaurants, too.

“If we have to revert back to where we were,” Jones said, “it could be disastrous.”