California, in a departure from previous policy, will not automatically enroll low-income elderly and disabled residents in managed care health plans during the next round of a three-year pilot project, state officials announced Thursday.

The state made the change in response to widespread concern that people were being enrolled in plans without their knowledge and without a clear understanding of what managed care meant for them. Future enrollment will be voluntary, officials said.

The project, known as the Coordinated Care Initiative, aims to improve the care of people who are beneficiaries of both Medicare, the program for elderly and disabled residents, and Medi-Cal, which serves low-income Californians. The 1.1 million “dual eligibles” are among the sickest and costliest patients in the state.

Instead of having to navigate two bureaucracies, beneficiaries of the program are part of one single health plan and are assigned a case manager to help coordinate their care. The plan gets paid a set rate to manage all of the person’s needs, including in-home care and nursing home stays. 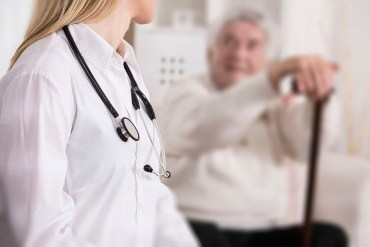 Officials from the state’s Department of Health Care Services announced the new policy to legislators Thursday. It is one in a series of changes the department hopes will increase enrollment and improve the program. However, the officials said they would consider reverting to automatic enrollment if not enough people sign up voluntarily.

The changes to the pilot project are scheduled to take effect this summer.

California is one of 12 states participating in demonstration projects for dual eligibles, which are jointly managed with the federal government. Some of the other states moving beneficiaries into managed care are Texas, Ohio, New York and South Carolina. The projects are testing ways to provide higher quality care at a lower cost.

In California, nearly 124,000 people in seven counties are enrolled in the managed care pilot project. The state had targeted an estimated 456,000 in those counties. But since beginning enrollment in spring 2014, it has struggled to get buy-in from beneficiaries, providers and patient advocates.

In the first round of enrollment, beneficiaries got information packets about the change, and were automatically enrolled in managed care plans unless they or an authorized representative said they wanted to opt out. But many beneficiaries never even knew about the plan to switch their coverage, and were caught off guard later on.

Roughly half of all people chosen for the pilot have opted out, and another 10 percent have dropped out after signing up.

California is taking the lessons it learned from the first two years of the program and trying to communicate more clearly with consumers to make enrollment smoother, said Sarah Brooks, a deputy director at the Department of Health Care Services. Many people opt out because they don’t fully understand managed care, she said.

“They don’t know the great care coordination they can get,” Brooks said. “They don’t know you can be in one consolidated program and you don’t have to access services in multiple programs.”

Researchers at University of California, Berkeley have conducted focus groups with beneficiaries and determined that those enrolled in the Coordinated Care Initiative are highly satisfied with the program. They say they appreciate the more simplified health insurance, easier access to services and lower out-of-pocket expenses.

But automatic enrollment led to confusion and frustration among many elderly beneficiaries who didn’t know that they had been switched to new insurance plans, said Denny Chan, staff attorney at the advocacy group Justice in Aging.

“They would go to a doctor’s office and find out that their appointment was cancelled or they couldn’t get their prescription drug from a pharmacy,” Chan said. “It didn’t work very well.”

His organization, along with the California Medical Association and several advocacy groups, had encouraged the state to move to voluntary enrollment.

In addition to voluntary enrollment, state officials announced another change they hoped would make sign-ups easier and more streamlined. In the past, consumers had to sign up through a state-contracted enrollment broker — even if they had already talked to their health plan. Under the change, consumers will only have to request enrollment through the health plan.

California Association of Health Plans spokeswoman Nicole Evans said too many people failed to complete their enrollments because of the required extra step. The new process will allow the beneficiary to sign up in one sitting, she said.

But Chan, of Justice in Aging, said signing up through an enrollment broker provided an important layer of consumer protection.

In another change announced Thursday, beneficiaries will be able to stay with their Medicare doctors for one year — up from six months — before they switch to physicians in their new insurance plan’s network.

Susan DeMarois, state policy director of the Alzheimer’s Association, said she appreciated the longer transition because many seniors get anxious about losing their doctors.

“Seniors have many doctors because they have multiple chronic conditions,” she said. “Even the thought of losing a physician … is enough not to sign up.”

That’s why Inglewood resident JoAnn Cannon, 67, said she chose to opt out of the Coordinated Care Initiative. Her primary care doctor, cardiologist and gastroenterologist all told her they were not participating.

“They told me if I wanted to sign up for it, I would have to find other doctors,” she said. “I wasn’t willing to make the change.”