Alec Murray was 13. He enjoyed camping, fishing and skiing. At home, it was video games, movies and books. Having just completed middle school with “almost straight A’s,” those grades were going to earn him an iPhone for his upcoming birthday.

Instead, he killed himself on June 8 — the first day of summer break.

Caleb Stenvold was 14. He was a high school freshman in the gifted and talented program. He ran track and played defensive cornerback on his school’s football team. Just two months into high school ― and four months after Alec’s suicide — Caleb killed himself on Oct. 22.

The teenagers, both from Reno, Nevada, didn’t know each other. But their families now do, bonded by loss. Their parents are haunted by what they don’t understand: why.

They ― along with mental health experts, school leaders and researchers — are trying to understand why suicide by children ages 10 to 14 has gone up and up. The suicide rate for that age group almost tripled from 2007 to 2017. Newly released 2018 data from the Centers for Disease Control and Prevention show a 16% increase over the previous year. 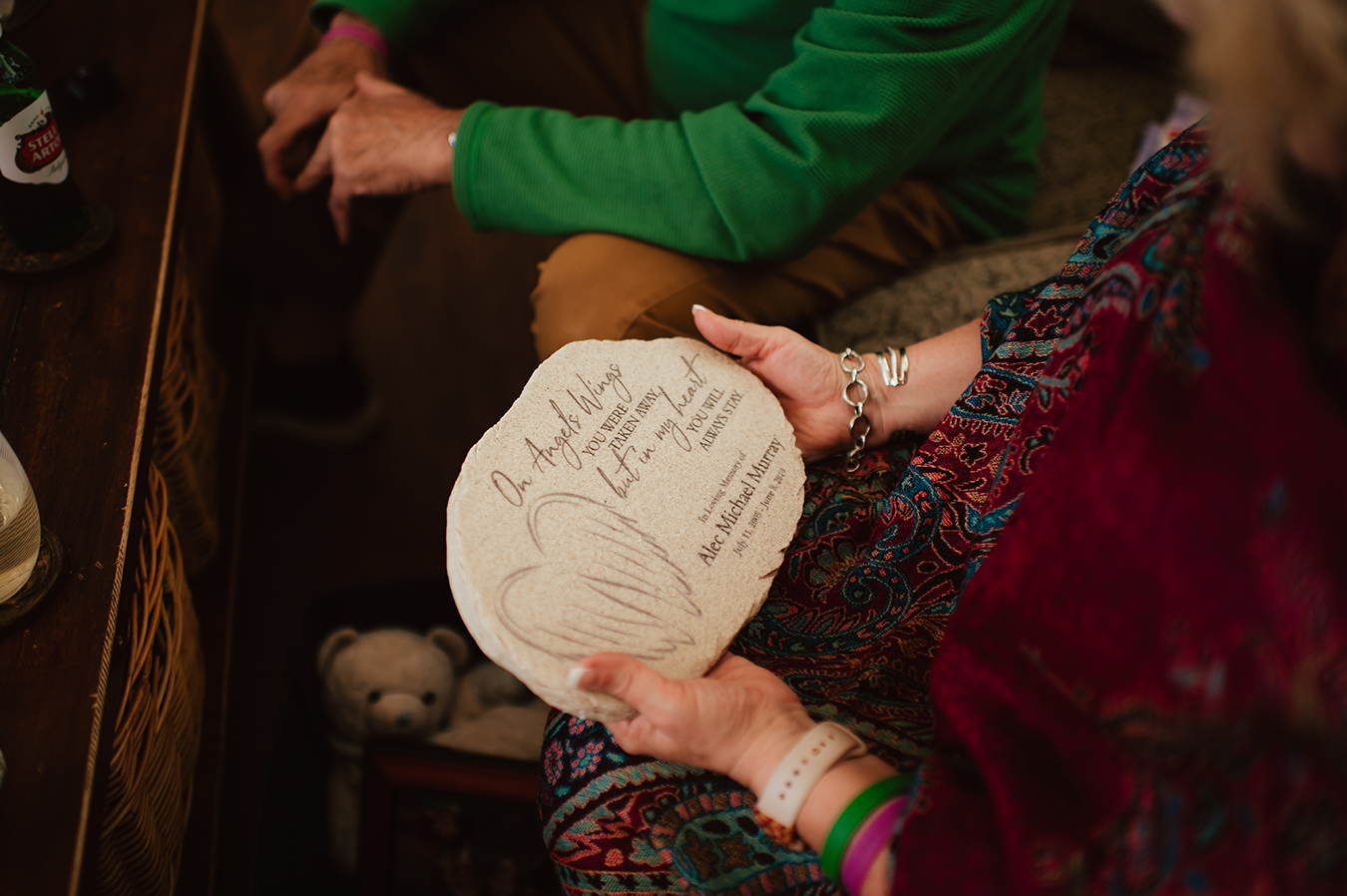 “Every family needs to have a conversation about suicide with their children — starting very young. Don’t just spring it on them when they’re 10,” says Paige Murray. (Lauren Casto for KHN)

While experts point to a host of explanations for the alarming rise, scientific proof about cause isn’t conclusive. Some research shows correlations with social media use, cyberbullying and the internet, but studies citing them as a suicide cause are less decisive.

The parents of Caleb and Alec believe impulsivity ― very common in teens because their brains aren’t fully developed — played a role in their suicides.

Kerri Countess, Caleb’s mother, called his suicide “totally unexpected and unimaginable.” He was the youngest of her five sons.

“We think it was an incredibly impulsive act by a hormonal young man,” she said, noting that Alec’s stellar grades were posted online the day of his suicide. 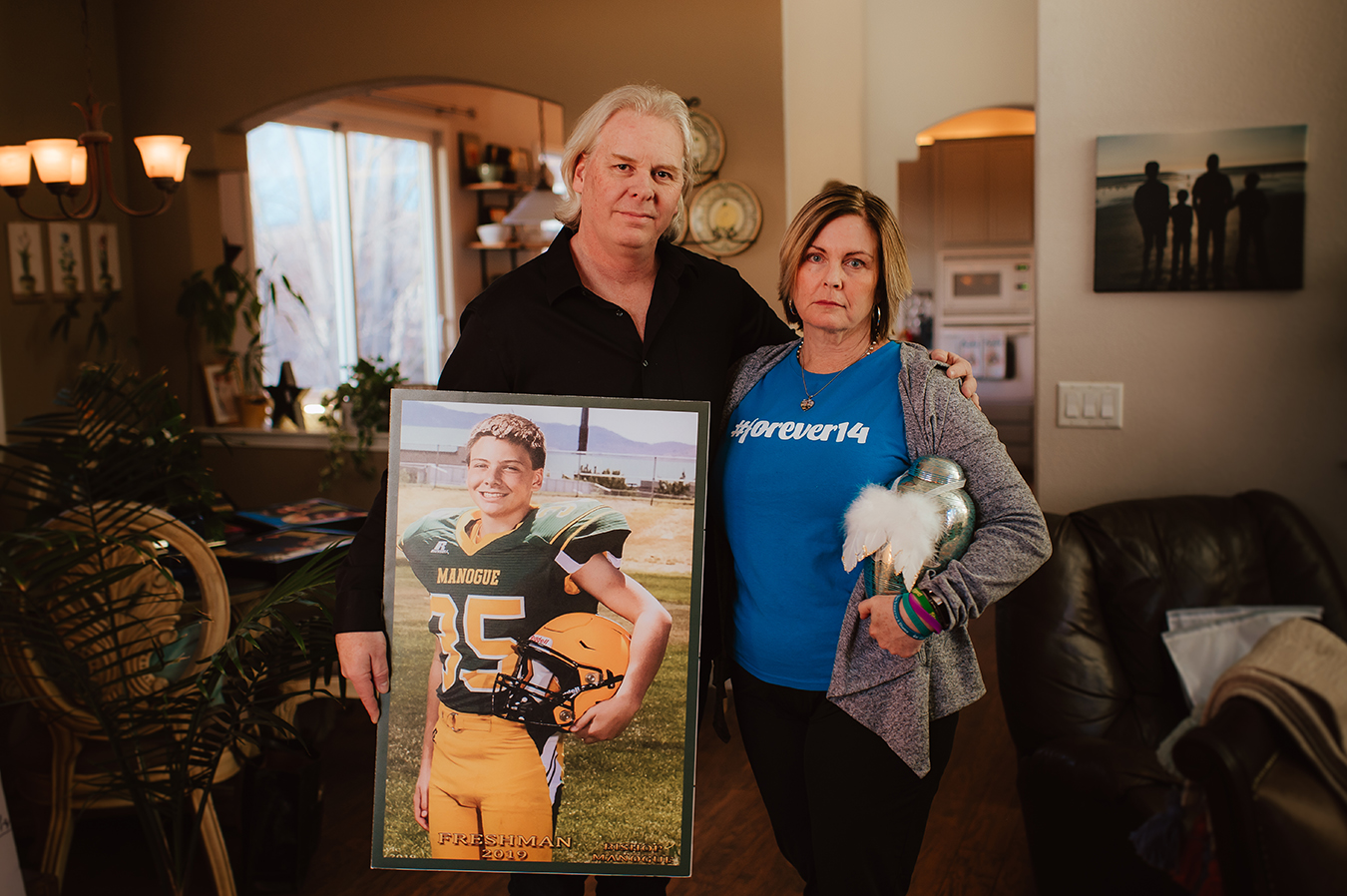 Experts suggest that our celebrity culture, where suicidal thoughts are sometimes romanticized or normalized, also plays a role. Alec’s parents and Caleb’s parents say they need to speak out and warn other families.

When Caleb died, “we wanted everyone to know he died of suicide because if it can happen to my child who was not bullied and did not fit into the reasons people kill themselves, it can happen to anyone,” Countess said. “It was an impulsive and immature act.”

Amy Kulp, executive director of the Washington, D.C.-based National Center for the Prevention of Youth Suicide, said youth, in particular, “have very few experiences with dealing with outside stressors” and “tend to be quite impulsive.”

“If they have a precipitating event like they are bullied or don’t make a team or a friend stops talking to them or something is on social media that they’re embarrassed about,” she said, “they don’t know they will get through it.”

“At ages 6, 7 and 8, I’m now seeing kids with depression,” said Alvord, of Rockville, Maryland. “It used to be suicide attempts were more in high school. Now, I’m seeing more completed suicides in middle school and even upper elementary school.”

The CDC data illustrate “a steady consistent increase,” that “deserves our focus and our attention,” said CDC statistician Sally Curtin. “It’s linear and has gone up every single year since 2010.”

The CDC also monitors suicide attempts and self-inflicted injuries, based on data from emergency rooms. The latest CDC report published Jan. 31 found that from 2001 to 2016 such visits for those 10 and older increased 42%, with “substantial increases occurring in younger age groups.”

Youth today are much more familiar with death, said Jonathan Singer, board president of the nonprofit American Association of Suicidology, citing more than 20 years of mass shootings at schools among reasons.

“Death has become public,” he said. “With the internet and social media, when somebody dies, it’s all over your newsfeed. Hundreds of millions knew within minutes that Kobe Bryant had died. Death is much more a part of their generation.”

Among those aiming to reverse the trend is the National Association of State Boards of Education, based in Alexandria, Virginia, which examined the 2017-18 school year and determined that 25 states and the District of Columbia required or encouraged school districts to develop suicide prevention policies. 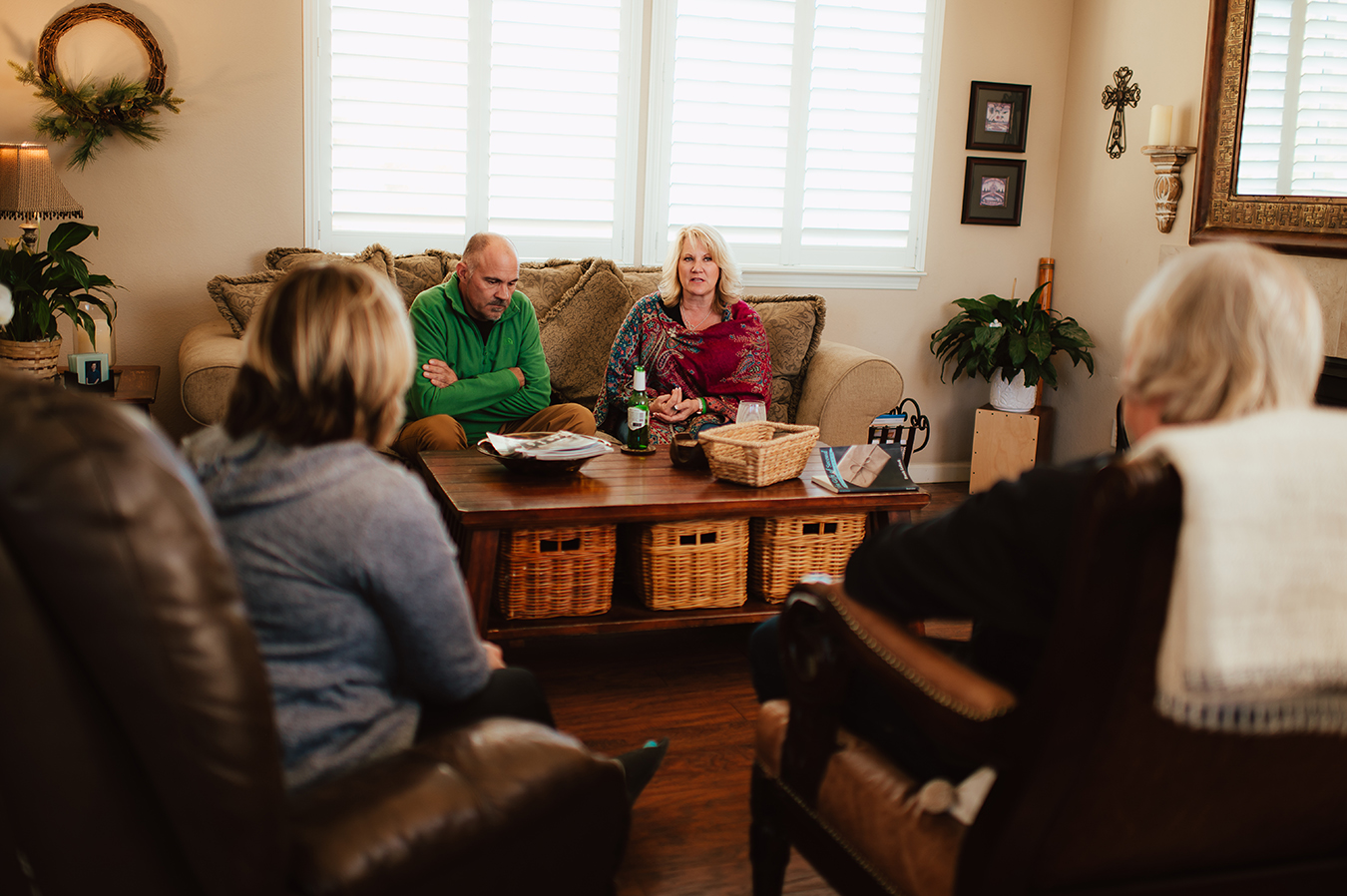 The parents of Alec and Caleb are moving past blame into action. Lee and Paige Murray (on couch) are working with the Reno Behavioral Healthcare Hospital and other agencies to better coordinate local suicide prevention. (Lauren Casto for KHN)

According to the organization’s policy review, author Megan Blanco said only three of 10 states with the highest youth suicide rates (ages 10-24) had a suicide prevention policy. The youth suicide rate for Nevada — where Alec and Caleb lived ― is 14.4 deaths per 100,000, which is higher than the national average of 10.6 deaths per 100,000. Nevada was not among the 25 states with a prevention policy, she said.

Alvord, the psychologist, has conducted programs to promote suicide awareness as a joint effort of National PTA and the American Psychological Association. She also helped APA develop online advice for parents to talk to teens about suicide.

Dr. Kenneth Ginsburg, a pediatrician and an adolescent medicine specialist at the Children’s Hospital of Philadelphia, co-founded the Center for Parent and Teen Communication.

“It’s never a mistake to ask a person about their emotions or whether [someone should] be worried about them,” he said.

“People think depression is always seen as sadness,” Ginsburg said. “While sadness is a very important clue, adolescent depression can present with irritability, rage or anger, instead of just sadness. Physical symptoms such as headaches, fatigue, belly pain, dizziness, loss of weight ― these are all things that can present as having problems with mood or depression. Parents may miss the signals.”

The day after his death, Caleb’s parents sought answers on his phone and computer, asking their son Matthew, then 16, to search Caleb’s history back to middle school for possible clues. They found one thing: a search for “suicide” the day before Caleb hanged himself.

Nadine Kaslow, a professor of psychiatry and behavioral sciences at Emory University School of Medicine in Atlanta, said parents need to realize that kids communicate differently today and any thought of banning social media or phones isn’t realistic or wise.

“Parents often get mad at kids because they’re texting or Instagramming or Snapchatting,” she said. “I worry when kids are not doing those things. If they stop doing that, they’re not having fun.”

Jean Twenge, a psychology professor at San Diego State University and author of the book “iGen,” has a darker view of the effects of media consumption and technology, based upon her research. Studies published in several journals in recent years — including the Journal of Abnormal Psychology, Psychiatric Quarterly and Sleep Medicine — found detrimental connections between the omnipresent smartphone, social media, sleep disruption and depression. 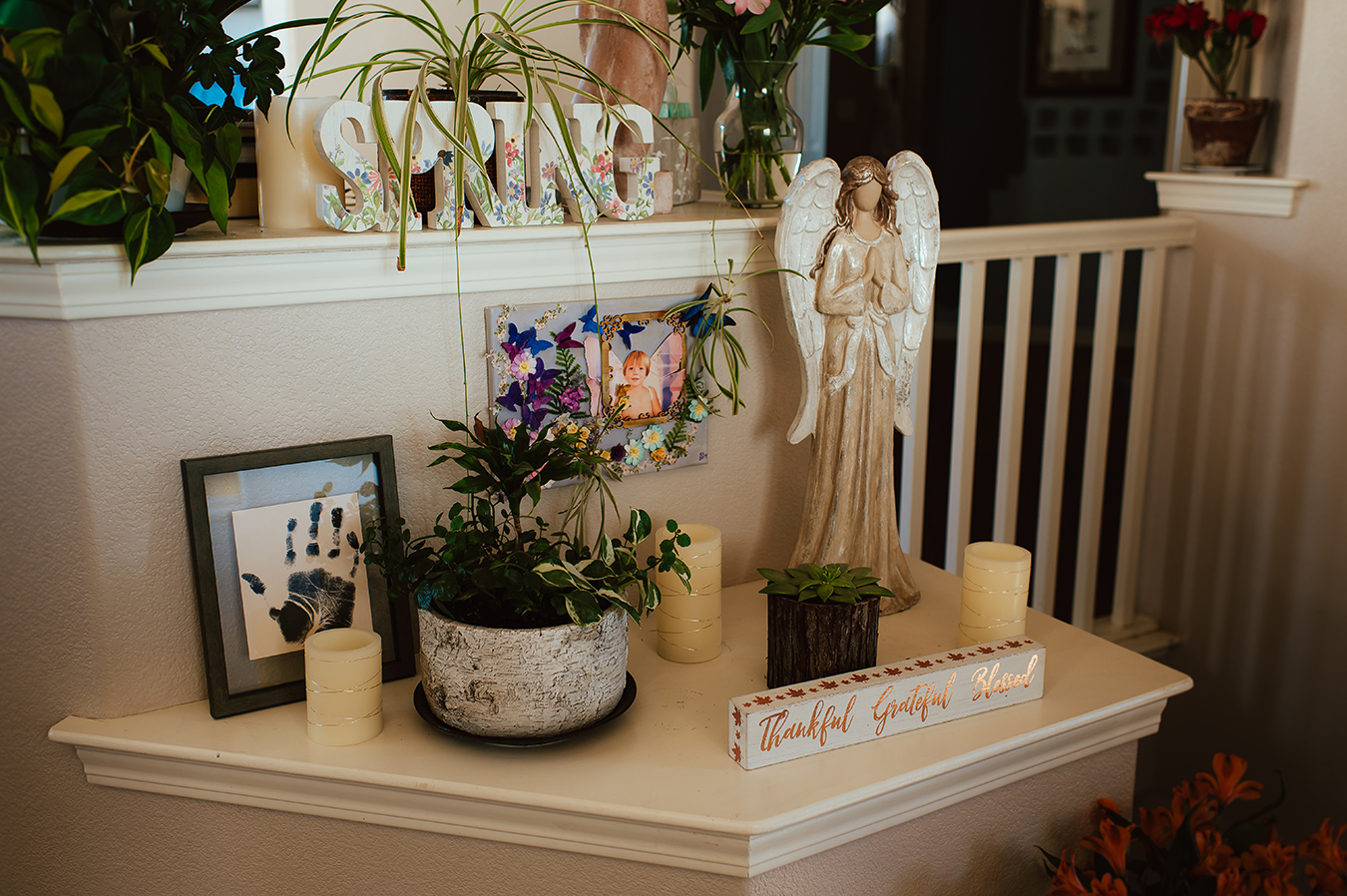 A memorial to Caleb Stenvold, who took his life at age 14, holds a place of honor in his home. (Lauren Casto for KHN)

The mother of three (including a 13-year-old) believes technology should not be in a child’s room overnight, and she doesn’t believe anyone 10 to 14 “absolutely needs a smartphone.”

Twenge said it’s difficult to determine a reason other than technology for the suicide spike in recent years.

“Phones and smartphones check all the boxes of possible causes,” she said. “It’s something that’s affected a very large number of people and affected their everyday lives. It’s hard to think of anything else that fits that criteria.”

Perhaps the most significant analysis supporting Twenge’s worries appeared this month in the Canadian Medical Association Journal. The evidence from cross-sectional, longitudinal and empirical studies “implicates smartphone and social media use in the increase in mental distress, self-injurious behaviour and suicidality among youth.” The review also found that social media “can affect adolescents’ self-view and interpersonal relationships through social comparison and negative interactions, including cyberbullying; moreover, social media content often involves normalization and even promotion of self-harm and suicidality among youth.”

A Pew Research Center report on cyberbullying released in 2018 found 56% of 13- to 14-year-olds had experienced cyberbullying; more than one-third said they had been the victim of offensive name-calling or false rumors.

Their parents said neither Alec nor Caleb were bullied. But many others are.

“We don’t know if bullying is the cause, or if kids who are depressed make better targets for a bully,” said Justin Patchin, co-director of the Cyberbullying Research Center.

Henry Kautz, a professor of computer science at the University of Rochester in New York, sees a similar dynamic with technology.

“People have been quick to point to studies that show increases in screen time and increases in depression. But it’s really unclear which way the causation goes,” he said. “Are people who are bullied and isolated seeking refuge in more screen time or is it the other way around?” 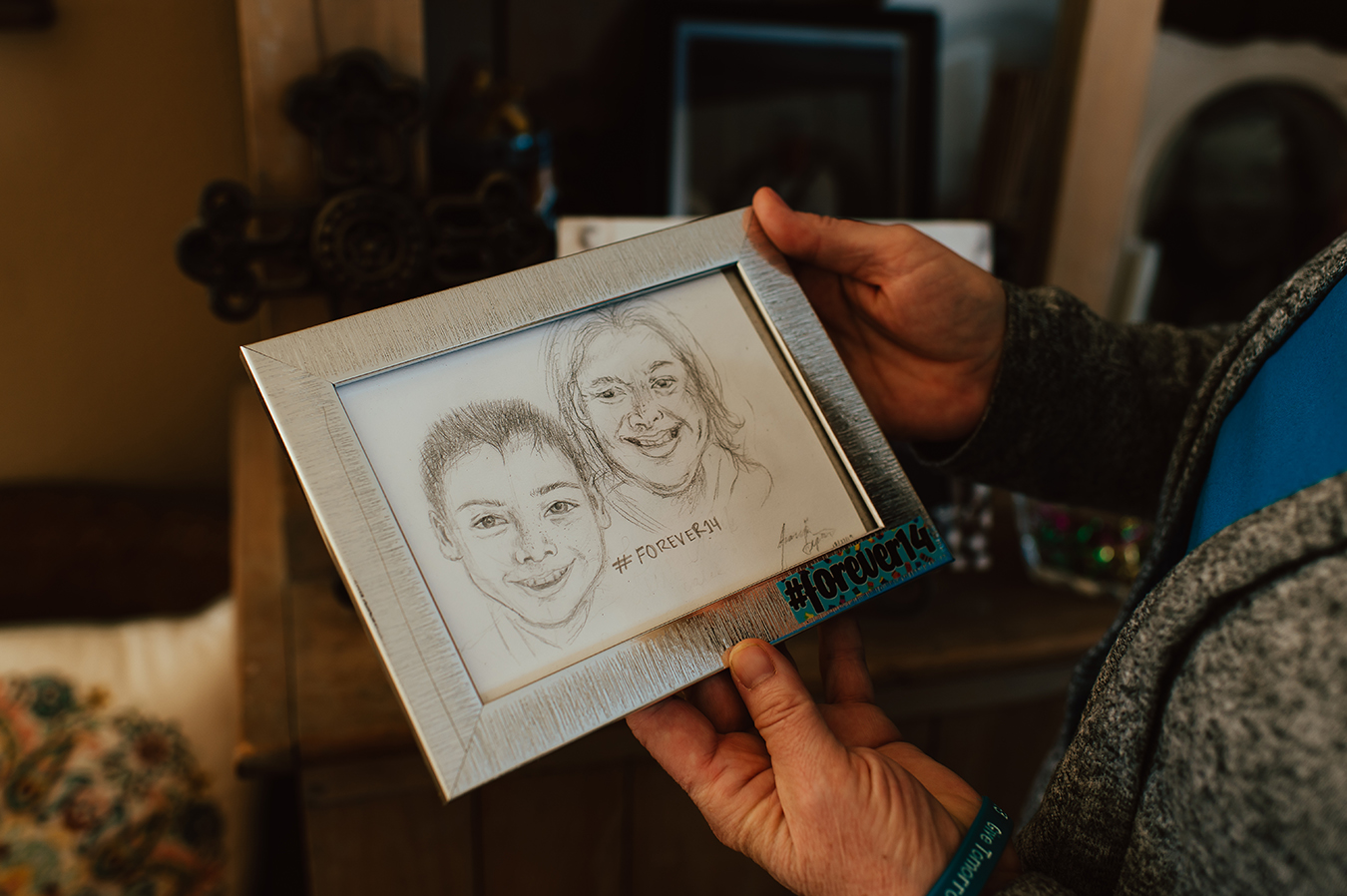 Caleb’s parents created Forever14.org, a website dedicated to preventing youth suicide by promoting conversation and human connection. They have filed paperwork to create a nonprofit with the same mission. (Lauren Casto for KHN)

The parents of Alec and Caleb are moving past blame into action. The Murrays are working with the Reno Behavioral Healthcare Hospital and other agencies to better coordinate local suicide prevention. Caleb’s parents created Forever14.org, a website dedicated to promoting conversation and human connection in order to prevent teen suicide. They have filed paperwork to create a nonprofit with the same mission.

“Don’t think it’s too young to talk to your kids about if they might feel like hurting themselves. You might think you have time to tell them, but you can’t go back,” Caleb’s father, Storm Stenvold, said. “I don’t know what pain he was in for that time that he felt he needed to do this. He decided on this very quickly. He was rarely alone. He was home less than three hours by himself.”

Paige Murray agrees, which is why she and her husband, Lee, said they weren’t going to be silent about Alec’s suicide.

“This wasn’t a conversation that ever entered our house until June 8, but knowing what we know now, it should be. We were blindsided by it,” Lee Murray said. “It’s hindsight. We could have done better, but how would you know?”

As Youth Suicides Climb, Anguished Parents Begin To Speak Out