Like countless other restaurateurs across California and the nation, Alex and Charity Prestifilippo have been caught in a precarious health-and-safety limbo.

Beginning in March, the COVID-19 pandemic shuttered their popular Gourmet Italia restaurant in Temecula, a wine-growing community of 115,000 southeast of Los Angeles. Dozens of employees were laid off; food stocks quickly became outdated.

They began bleeding cash — about $20,000 every day in lost business, rent and sundry other payments on Gourmet Italia and their other properties, a winery and the pizzeria Spuntino.

While desperate to reopen, the couple also realized the perils involved in serving food to the public with a dangerous pathogen on the loose. The Centers for Disease Control and Prevention’s guidelines were confusing enough for the general public. For restaurants trying to keep loyal patrons safe, the lack of clarity was maddening.

What precisely did social distancing mean inside their restaurant, the Prestifilippos wondered. Did customers expect servers, chefs and busboys to wear masks? How vigilantly did they have to sanitize counters and tables? How often should employees wash their hands?

“It was stressful,” said Charity. “While we understood the government itself was trying to figure all of this out, nobody could give us any hard answers. And we couldn’t devise a plan of attack without permanent information.”

After being advised he could seat his restaurant at only 50% capacity, Alex said, he was later informed there was no capacity limit, as long as tables were spaced 6 feet apart.

“Government health officials were giving owners a moving target. Even restaurant associations were having a hard time getting a handle on the right process,” said Phil Mott, a Colorado-based restaurant consultant. “Owners faced retraining all their employees, but they weren’t even sure what that training entailed.”

The Prestifilippos recently reopened Gourmet Italia and Spuntino, but not without much anguish and deliberation, and many tough decisions.

Beginning in April, Charity joined a weekly virtual meeting with dozens of other restaurant owners in the tightknit tourist community, dotted with privately owned wineries and mom and pop eateries. Many feared they would be forced to close for good if they didn’t reopen soon. Some wanted to “go rogue,” opening collectively and gambling that heath officials would not close them all down.

In the end, the group of Temecula restaurant owners decided to wait, using the time to develop a list of preferred practices for the future, precautions that ranged from providing hand sanitizer and wipes to replacing traditional salt and pepper shakers with disposable packets.

They agreed to document bathroom cleaning schedules and open the parking lot to outdoor tables so customers could keep their distance. Cafes with counter service considered installing plexiglass barriers between diners.

“The idea was to do more than you would probably need — so customers could see that you were doing your best to create a safe place,” said Charity. “But there were also business considerations. Could you be as quick and efficient with your service if you have to take all these precautions? How was all this going to work?”

After emigrating from Sicily, Alex, 51, learned English and opened his first restaurant in 1999. He eventually developed a 7,000-square-foot space with high-end Italian cuisine and white linen tablecloths that Tripadvisor described as a romantic dining spot.

Charity, 47, was one who found romance there. She came in first as a customer, then met Alex, and they fell in love.

The Prestifilippos received about $300,000 in economic assistance through Small Business Administration loans. Still, it felt as if they were leaking hard-earned money. And the projected costs of implementing all these health precautions — between $500 and $1,000 a day — brought sticker shock.

“I showed Alex the figures and he said, ‘Are you kidding me?’” Charity recalled.

Not only were supply prices escalating with increased demand, but also there were long waits for items such as specialized thermometers that could be applied to the foreheads of employees, and possibly customers, which cost $180 or more — if you could get them. They also needed gallons of sanitizer, masks, gloves and who knew what else?

“I just spent $2,800 on peroxide for the two restaurants and I have no idea how long that’s going to last,” Alex said. Masks cost $1.50 each, and the chefs, servers and busboys use several each shift, he said. 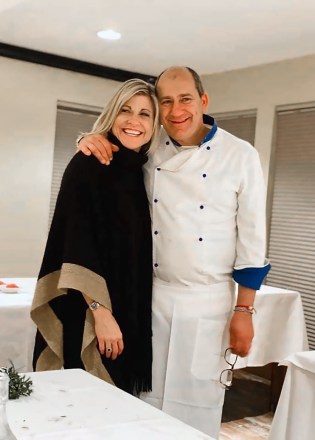 Alex decided not to raise prices to cover the costs. That would not be fair to his customers, he said.

On May 30, after months of quarantine, customers formed a line outside for Gourmet Italia’s first lunch seating.

The diners encountered a coronavirus safety plan that had been months in the making. For starters, the owners kept the front doors open so customers didn’t have to touch the handles and installed hand-sanitizing devices at the entrance.

Servers and busboys wore masks, and the bar and kitchen staff donned gloves as well. Only after tables were seated were plates and wrapped silverware presented. Menus were sanitized after each use, and salt and pepper shakers were brought on demand — and quickly wiped down. Tables were moved into the bar area to create extra distance, and workers patrolled the restaurant to clean surfaces. All 35 workers returned from layoffs.

So far, business has been down. Alex handled 150 diners during the Saturday night of the reopening and brought in $10,000, down from 450 customers and $30,000 on a typical Saturday before the shutdown. Street protests against police violence in Temecula held down the opening-day crowd, he said.

Alex described the opening-night atmosphere as like a family reunion, with people constantly approaching to congratulate him. He had to duck inside his office to get any paperwork done. Alex said he’s sure no customer will get sick in his restaurant. “We have one employee whose only job all day is to sanitize menus, chairs, tables and door handles, and clean the bathroom every half-hour,” he said. “I feel safe.”

And though he hails from an Italian culture of embraces and social kisses, Alex has chosen to put safety over traditional social graces.

“I told myself, ‘I’m not gonna hug,’” he said. “It’s very important to respect the code. I let my employees know — elbow bumps only. No hugs. No hands.”

The Costs Of Safely Reopening A High-End Restaurant