I had always imagined going through pregnancy surrounded by family and friends. But when I found out I was pregnant, my husband, Alex, and I had just moved from San Francisco to Chicago. I knew almost no one.

I ended up finding a community where I least expected it: at a medical office.

CenteringPregnancy is group prenatal care offered by more than 600 practices across the country. Rather than the standard 15-minute individual visits in an exam room, women who are due around the same time and their partners meet as a group for two hours with a clinician, usually a midwife.

In other words, take one of the most intimate chapters in a couple’s life and have them experience it with a bunch of strangers.

I was wary. It seemed like a convenient way to cram more patients through the door and give them less attention. But when, at my first prenatal visit at Northwestern Medicine, midwife Carol Hirschfield told me the practice happened to be launching its first CenteringPregnancy group, I figured it might be a good way to meet people.

That turned out to be the best decision we made during the pregnancy.

We met up in the early morning on Thursdays, often bleary-eyed from another night of bad pregnancy sleep. The moms each stopped first for a quick weight and blood pressure check, and then we all gathered in a classroom that had previously been an operating suite. There were seven couples in my group, though there can be 10 or more.

One by one, each couple slipped behind a curtain in a corner of the room for a brief medical exam with one of the two midwives who led the group. Our bellies were measured, the baby’s heartbeat checked, and we had a moment to share any major symptoms.

Meanwhile, the rest of the group milled around the main part of the room, a bit awkwardly at first. If we’d been in a waiting room for a standard appointment, we might not give one another more than a nod. But here, munching on banana bread baked by the midwives, we quickly discovered how much the experience of pregnancy gave us in common. Soon we were chatting about the struggles of no longer being able to sleep on our backs, the best pregnancy pillow to buy and the importance of foot rubs from our partners.

After the exams, we gathered in a circle of chairs to talk about all the crazy things happening to our bodies. In the very first activity, the midwives handed out laminated cards with pregnancy symptoms written on them — things like swollen feet or food cravings. We were to go around and read our symptom, and then share whether it was something we had experienced. The very first card to be shared: vaginal discharge. And, with a few giggles, the ice was broken. 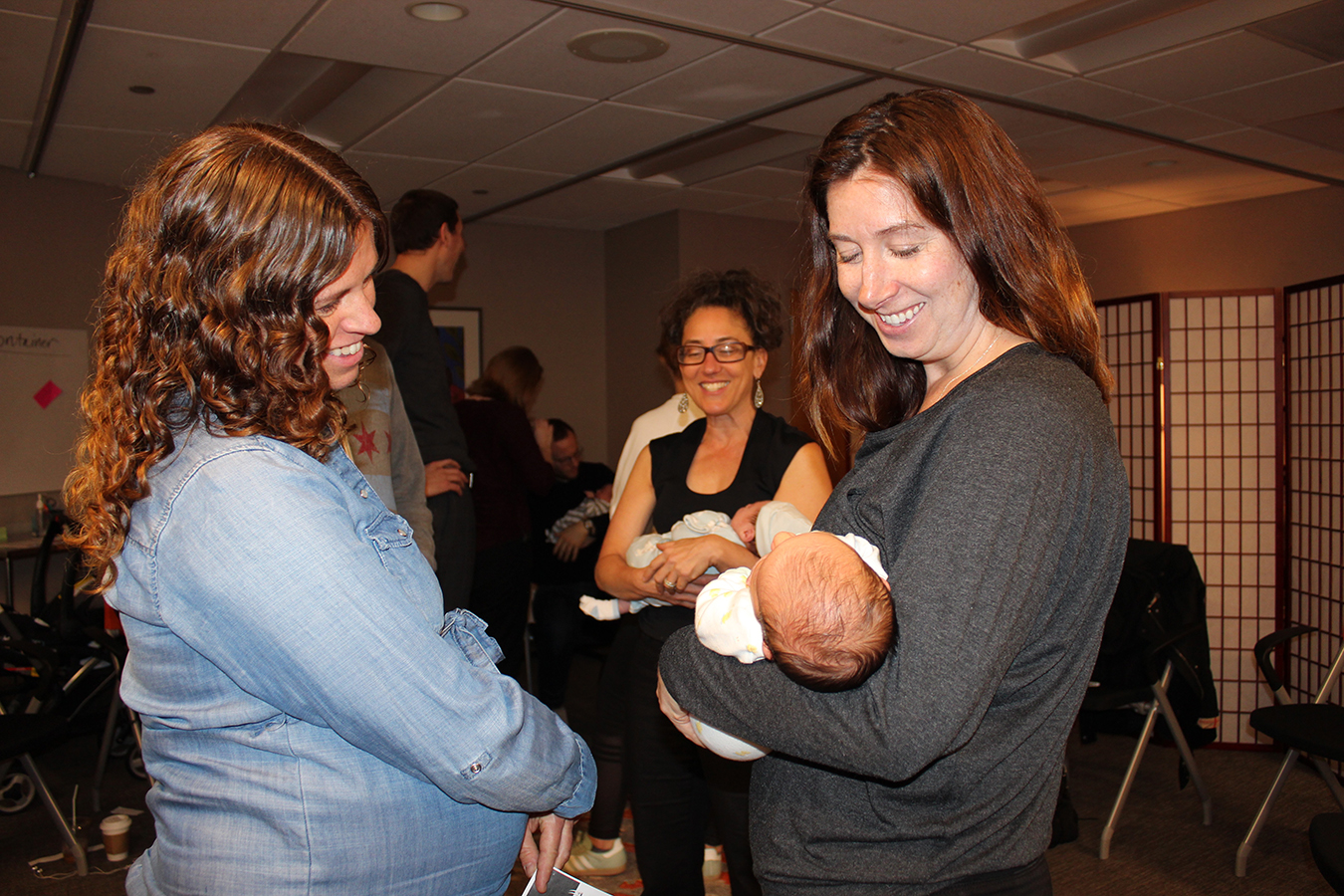 Andrea Moffat (left) admires Kate Galecki’s newborn daughter at a session of CenteringPregnancy at Northwestern Medicine in Chicago. Over the past five years, the number of practices that offer the program has nearly doubled. (Jenny Gold/KHN)

We met monthly at first, and then more frequently as we got closer to our due dates. The curriculum was based on workbooks created by the Centering Healthcare Institute in Boston and focused on things like nutrition, relationships, labor and delivery, and newborn care. We often started with a breathing exercise or a short icebreaker, followed by prompts and games to encourage us to share the details of our experiences and fears, and teach us how to take care of ourselves and prepare for our new lives as parents.

It didn’t take much to get us talking, laughing and commiserating. Sometimes it felt a lot like a support group, and that’s part of the point. The goal of CenteringPregnancy is to provide medical care and educate, but also to reduce stress and isolation, which can contribute to poor birth outcomes.

Years of studies — many focusing on teen and low-income moms — have found that babies born to women in CenteringPregnancy groups are less likely to be premature, underweight or spend time in the intensive care unit. A 2016 study on a South Carolina program, for example, found that participating in CenteringPregnancy reduced the risk of premature birth by 36%. And that saved money — $22,667 for every premature birth prevented in Medicaid, the state’s health insurance program for the poor. Typically, the patient’s insurance company will not know they have been a part of a Centering group, which is billed as standard prenatal care.

The CenteringPregnancy program was started in 1993 by midwife Sharon Schindler Rising in Connecticut, who was frustrated that she had to rush through patients’ exams. Over the past five years, the number of practices that offer Centering has nearly doubled to 600; midwives still lead most of the groups. About half are in community health centers that serve mainly low-income women, but private practices like Northwestern have also started programs.

“I’ve been out of my mind excited with how this has gone,” Hirschfield, told me one day in her office. “I end every group by saying, ‘Oh, my God, they’re learning so much more than our — quote-unquote —regular patients.’”

Hirschfield said she was surprised by how open people have been about their lives, sexual relationships and bodies. “There just isn’t time for that when you have 15 minutes every couple of weeks to just listen to heartbeat and take blood pressure and ask how your back is feeling.” If participants had additional questions or concerns, we could schedule separate individual visits or reach out via email.

Ariel Yellin Derringer, the other midwife who led our group, told me that so far, “the biggest positive outcome here is the growth of community — having people go through the most difficult transition in their life with other women going through the same thing.” 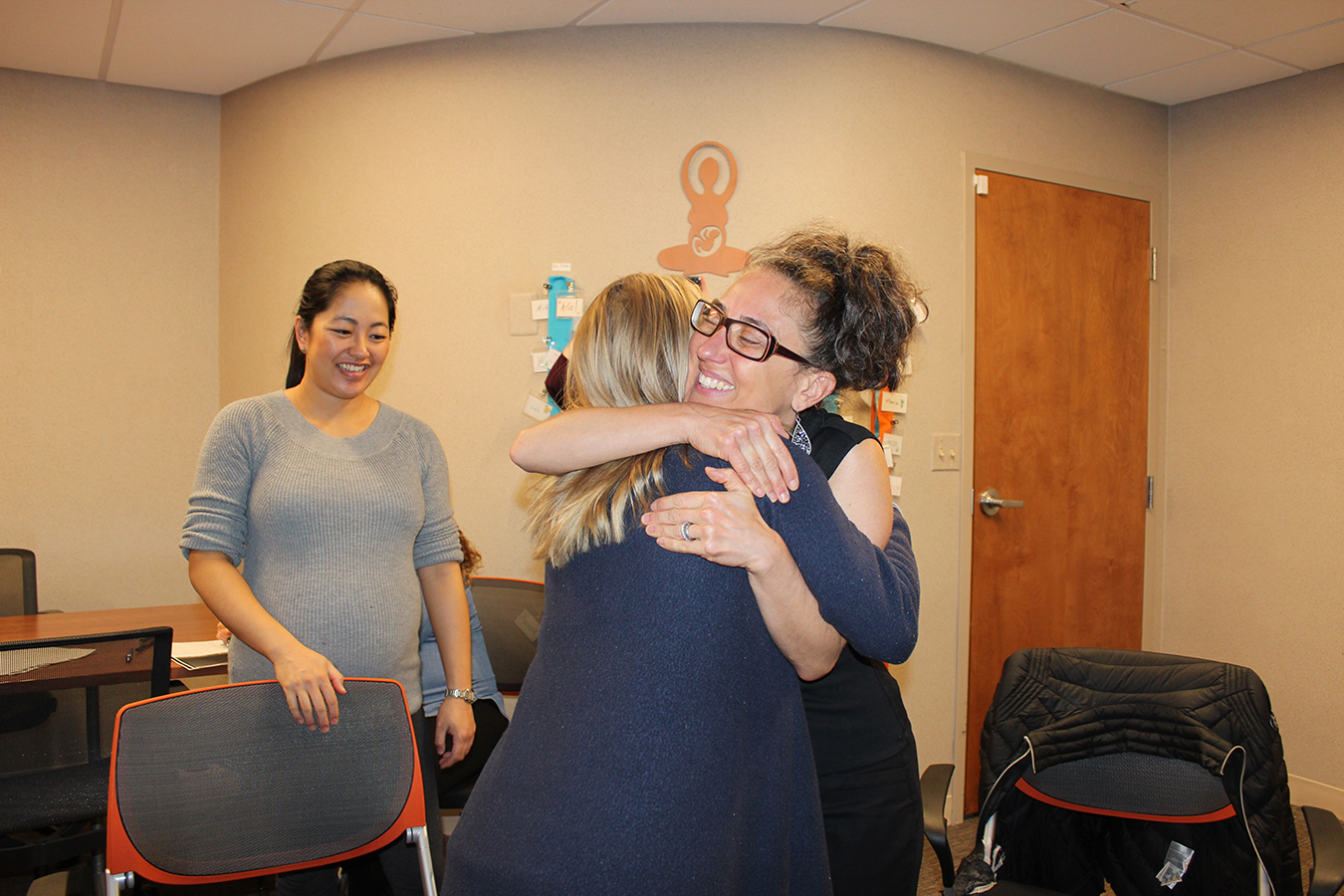 She said it also has been rewarding professionally. “We do so much educating during one-on-one prenatal care, and sometimes I feel like a broken record,” Derringer said. “I think, ‘I could have done this with eight to 10 people and taken it three levels deeper, but we just don’t have the time to do that.’”

The practice has now had a year’s worth of experience with the program, and Derringer said it has been easy to recruit patients to participate. So far, most of the sessions have been full. “My vision in the future is really an opt-out as opposed to an opt-in,” she said.

I worried at first that I might miss one-on-one attention during group visits. What I found instead was the Chicago tribe I’d been seeking. I managed to make it to our group’s final session on our first day after leaving the hospital. Our son was one of the three brand-new humans in attendance.

We all went around in a circle and shared what the experience had meant for us. “You don’t feel as alone or neurotic when you can talk about things and everyone else is going through the same thing,” said Grace Tuman. She surprised herself by getting teary as she spoke. I felt the same way.

We moved back to California just two months later, but it didn’t mean the end of our group. Instead, we went from a pregnancy crew to a parenting crew, commiserating over email about nighttime wakings and reminding each other to breathe in the midst of the chaos. In April, my family flew back to Chicago to attend a reunion during a snowstorm. Even the midwives showed up.

It’s a long way to travel, but this little community, forged at a medical office, is one I’m hoping to be a part of for a long time to come.

The Unexpected Perk Of My Group Pregnancy Care: New Friends