To some, the California Nurses Association’s political tactics in pushing for a single-payer health system seemed a bit, well, extreme.

Never mind the raucous demonstrations it brought to the state Capitol in recent weeks, the “shame on you” chants in the hallways, the repeated unfurling of banners in the rotunda despite admonitions from law enforcement.

To further the nurses’ cause, the union’s executive director, RoseAnn DeMoro, tweeted out a picture of the iconic California grizzly bear being stabbed in the back with a knife emblazoned with the name of a powerful state lawmaker who stalled the single-payer bill sponsored by the union.

Before and after that tweet, the legislator — a Democrat — said he was besieged by death threats.

Meanwhile, the union’s public relations guy blasted a blogger for Mother Jones magazine — named after the famous union firebrand — for being insufficiently liberal in his single-payer coverage. “Maybe you can recommend the name of your magazine be changed … to Milton Friedman, which would better reflect your class sympathies,” communications director Chuck Idelson wrote acidly.

Dramatic and, to some, offensive, tactics are nothing new for this California union of about 100,000 registered nurses, which has made a name for itself in the state and nationally as a progressive and aggressive political powerhouse. Its reach has only broadened with the advent of social media. Leader DeMoro counts more than 29,000 Twitter followers, and CNA’s operation has a knack for mobilizing protesters and drawing crowds.

“The politicians are afraid of these angry intense grass-roots activists” mobilized by the union, said Mike Madrid, a Republican and principal at the public affairs firm Grassroots Lab, who believes the tactics could backfire. “Using fear and intimidation as a tactic in the legislature usually doesn’t get you too far.”

Others are impressed with the union’s drive and creativity, recalling how in 2005 CNA members taunted California’s then-governor, Arnold Schwarzenegger, trailing him wherever he went to protest his attempts to roll back hard-won nurse-to-patient requirements in hospitals. Activists dressed up as the Republican leader and staged theatrical protests at baseball games, rock concerts and even the San Francisco Ritz-Carlton.

In the single-payer fight, the union has shown it will go just as fervently after Democratic leaders in a heavily Democratic legislature. While the union isn’t responsible for everything freelance activists do in a campaign, the Assembly Democratic caucus has condemned the “bullying tactics” and violent rhetoric in the CNA-led effort.

Though not always admired for its approach, the CNA often gets results — or works up a sweat trying. It counts among its legislative successes the 1999 passage of the strict nurse-to-patient ratios, the nation’s first such mandate to bolster staffing in hospitals. It has fended off attempts to overturn that law, worked to protect employee pensions and pushed for campaign financing reform. And it lent its considerable political muscle to Bernie Sanders’ presidential campaign.

Historically, the nurses have had the upper hand in labor negotiations, says Joanne Spetz, director of the Health Workforce Research Center at UC-San Francisco. That’s partly because in some areas of California it represents most or all of the registered nurses, including many thousands who work for the managed-care giant Kaiser Permanente. (Kaiser Health News, which produces California Healthline, is not affiliated with Kaiser Permanente.) 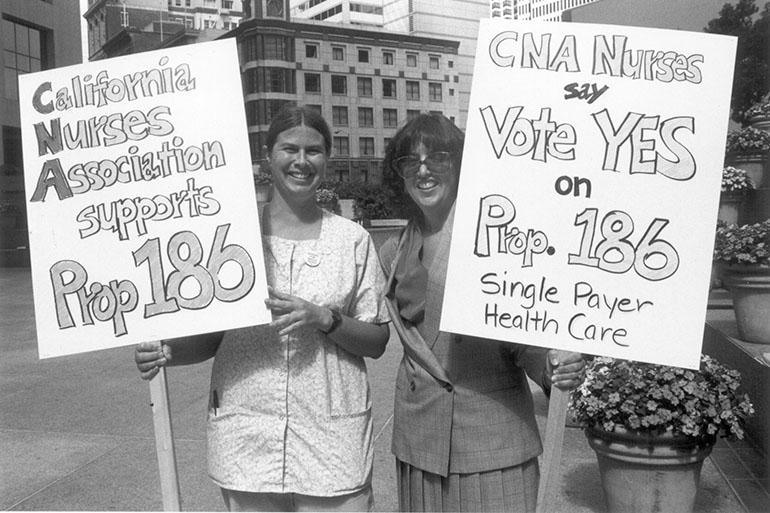 The union, founded in 1903, has always “punched above its weight,” said Thad Kousser, chair of the political science department at University of California-San Diego.

Sherry Bebitch Jeffe, a professor of public policy communication at the University of Southern California, agreed.

“I’m not sure we would be discussing single-payer if not by the push of the nurses’ association,” Jeffe said.

The union, which is affiliated with National Nurses United, makes no apologies for its approach, saying it is determined to hold lawmakers accountable. And it has no intention of backing off its campaign for a single-payer system in the state, an effort that would put the California government in charge of funding health care.

Lighty said that the rallies reflect Californians’ desperation and fear about losing health coverage under Republican proposals to repeal Obamacare more than anything else.

Although Lighty said the union’s elected nurse leaders collectively decide on its actions, supporters and critics alike see DeMoro as setting the tone and agenda.

People focus on DeMoro because she “pushes the parameters of the politically possible” and that rubs “defenders of the status quo” the wrong way, Lighty said. DeMoro, on vacation, was unavailable for comment.

Former state senator Sheila Kuehl, who attempted several times to pass a single-payer bill, said the California Nurses Association has always been “very aggressive for the things they believed in.” 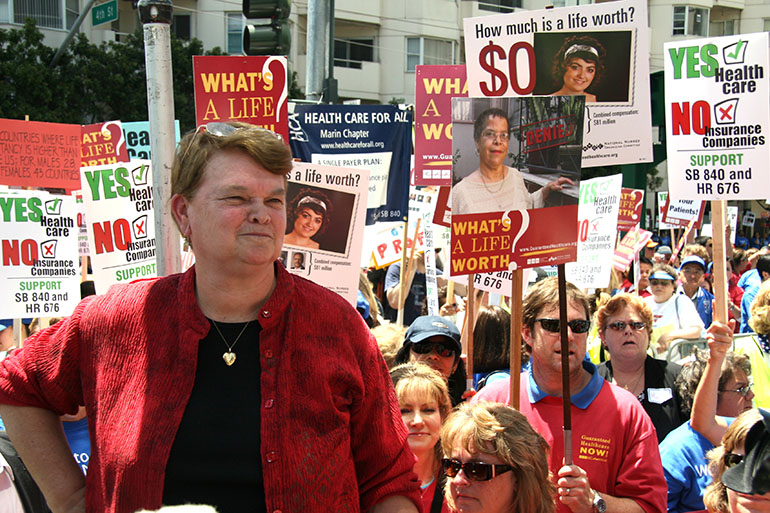 Former state senator Sheila Kuehl, who authored single-payer legislation in the 2000s, participates in a 2008 rally in San Francisco. (Courtesy of the California Nurses Association)

A smaller health consumer advocacy group persuaded Kuehl to carry the bill for the first time in 2003-04, Kuehl recalled, but the California Nurses Association brought more visibility and credibility when they joined her effort. Eventually, it became a co-sponsor.

“CNA, as fierce and progressive as they are, gave the idea a real boost,” said Kuehl, now a Los Angeles County supervisor.

Two of her bills passed through the legislature, but both were vetoed by Schwarzenegger.

Kuehl doesn’t buy the argument that the union’s in-your-face strategies may hurt their chances of passing single-payer later. Union members made nasty comments about Schwarzenegger at their rallies and that didn’t hurt the CNA’s reputation, she said.

Madrid, the Republican political consultant in Sacramento, says the CNA’s aggressive advocacy for a single-payer health system reflects the intense political polarization seen around the country right now — as well as conflicts among members of left-leaning causes.

More mainstream Democrats, including Assembly Speaker Anthony Rendon — the recipient of online death threats — say the legislature’s priority is to defend California against a GOP-proposed repeal of the Affordable Care Act and massive cuts to Medicaid, the state and federal health plan for the poor.

Rendon also said the single-payer bill, though approved by the state Senate, was “woefully incomplete” and needed to be recast. Among other problems, it carried a $400 billion annual price tag, according to an analysis by the state Senate Appropriations Committee.

But the CNA sees an opportunity for broader change and believes single-payer can move forward even as the state fights the Republican proposals in Washington.

If the single-payer bill stays idle in the legislature this year, the group vows to try again next year, making it a campaign issue in the 2018 elections.

“The best way to fight the GOP is to have an alternative,” Lighty said.

California Healthline correspondent Ana B. Ibarra contributed to this report.

The Union That Roars: Nurses Aren’t Giving Up On California’s Single-Payer Push