Ralph Stepney’s home on a quiet street in north Baltimore has a welcoming front porch and large rooms, with plenty of space for his comfortable recliner and vast collection of action movies. The house is owned by Joann West, a licensed caregiver who shares it with Stepney and his fellow Vietnam War veteran Frank Hundt.

“There is no place that I’d rather be. … I love the quiet of living here, the help we get. I thank the Lord every year that I am here,” Stepney, 73, said.

It’s a far cry from a decade ago, when Stepney was homeless and “didn’t care about anything.” His diabetes went unchecked and he had suffered a stroke — a medical event that landed him at the Baltimore Veterans Affairs Medical Center.

After having part of his foot amputated, Stepney moved into long-term nursing home care at a VA medical facility, where he thought he’d remain — until he became a candidate for a small VA effort that puts aging veterans in private homes: the Medical Foster Home program. 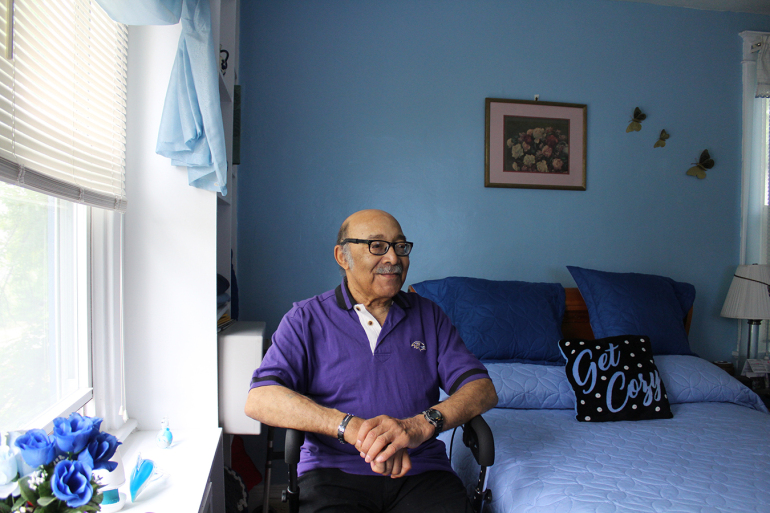 Ralph Stepney, a Vietnam War veteran who was homeless a decade ago, watches TV in his room earlier this month. Stepney moved into caregiver Joann West’s home in Baltimore in 2016 through the Veterans Affairs’ Medical Foster Home program. (Lynne Shallcross/KHN)((Lynne Shallcross/KHN)) 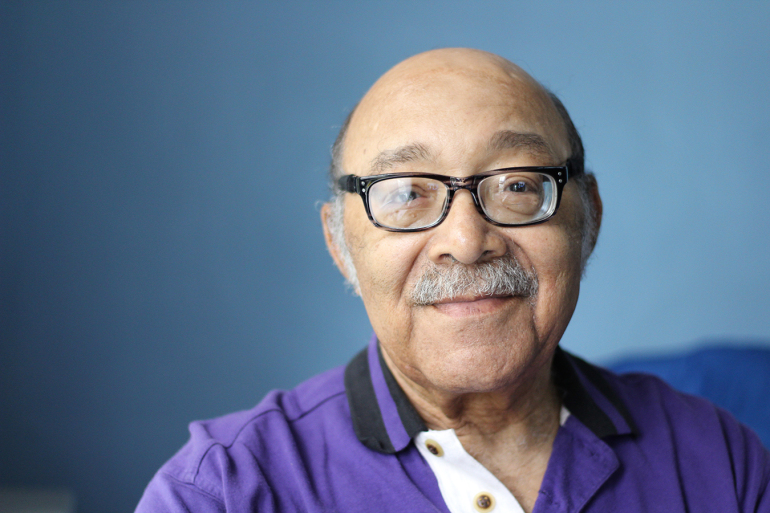 The $20.7 million-per-year program provides housing and care for more than 1,000 veterans in 42 states and Puerto Rico, serving as an alternative to nursing home care for those who cannot live safely on their own. Veterans pay their caregivers $1,500 to $3,000 a month, depending on location, saving the government about $10,000 a month in nursing home care. It has been difficult to scale up, though, because the VA accepts only foster homes that meet strict qualifications.

For the veterans, it’s a chance to live in a home setting with caregivers who treat them like family. For the Department of Veterans Affairs, the program provides an option for meeting its legal obligation to care for ailing, aging patients at significantly reduced costs, since the veterans pay room and board directly to their caregivers.

Cost-effectiveness is but one of the program’s benefits. Stepney and Hundt, 67, are in good hands with West, who previously ran a home health care services company. And they’re in good company, watching television together in the main living room, going to elder care twice a week and sitting on West’s porch chatting with neighbors.

Ralph Stepney (left) and Frank Hundt sit on the front porch of the Baltimore home they share with caregiver Joann West on May 18, 2018. (Lynne Shallcross/KHN)

West, who considers caring for older adults “her calling,” also savors the companionship and finds satisfaction in giving back to those who spent their young lives in military service to the U.S.

“I took care of my mother when she got cancer and I found that I really had a passion for it. I took classes and ran an in-home nursing care business for years. But my dream was always to get my own place and do what I am doing now,” West said. “God worked it out.”

The Medical Foster Home program has slightly more than 700 licensed caregivers who live full time with no more than three veterans and provide round-the-clock supervision and care, according to the VA. Akin to a community residential care facility, each foster home must be state-licensed as an assisted living facility and submit to frequent inspections by the VA as well as state inspectors, nutritionists, pharmacists and nurses.

Unlike typical community care facilities, foster home caregivers are required to live on-site and tend to the needs of their patients themselves 24/7 — or supply relief staff.

“It’s a lot of work, but I have support,” West says. “I try to make all my personal appointments on days when Mr. Ralph and Mr. Frank are out, but if I can’t, someone comes in to be here when I’m gone.”

VA medical foster home providers also must pass a federal background check, complete 80 hours of training before they can accept patients, plus 20 hours of additional training each year, and allow the VA to make announced and unannounced home visits. They cannot work outside the home and must maintain certification in first aid, CPR and medicine administration.

But one prerequisite cannot be taught — the ability to make a veteran feel at home. West has grown children serving in the military and takes pride in contributing to the well-being of veterans.

“It’s a lot of joy taking care of them,” she said of Stepney and Hundt. “They deserve it.” 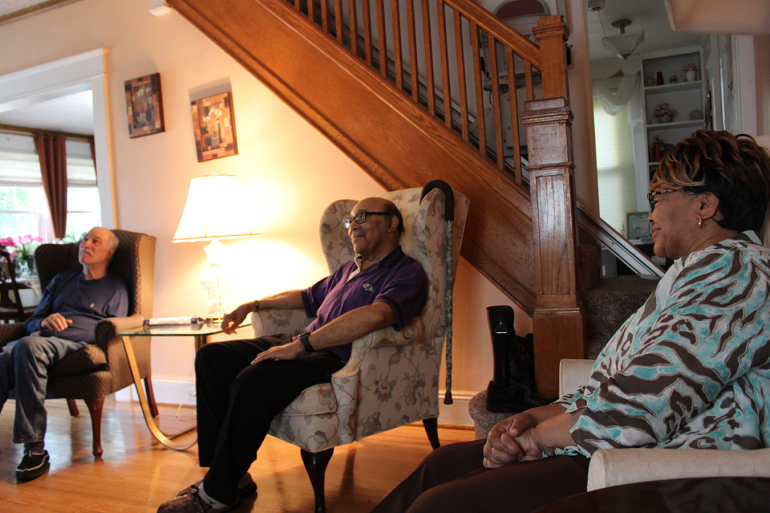 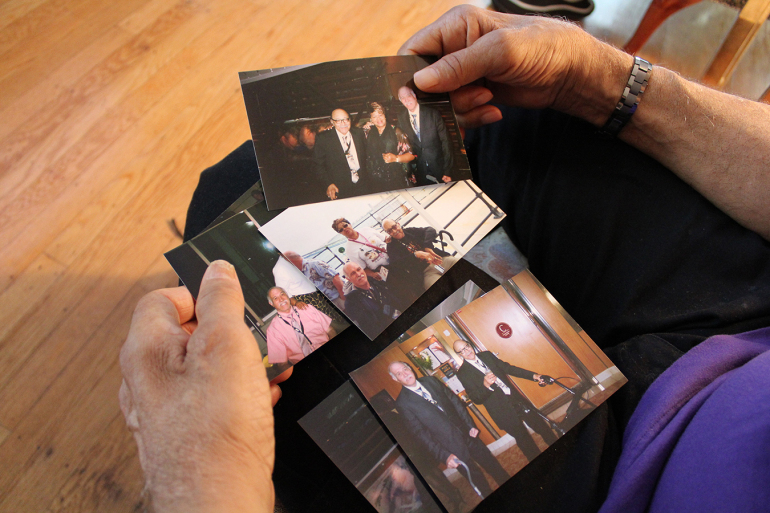 Ralph Stepney holds photos from a cruise he took to Bermuda with West and Hundt. Stepney put the photos into a keepsake album that he keeps at their home. (Lynne Shallcross/KHN)

To be considered for the program, veterans must be enrolled in VA health care; have a serious, chronic disabling medical condition that requires a nursing home level of care; and need care coordination and access to VA services. It can take up to a month to place a veteran in a home once they are found eligible, according to the VA.

The veterans also must be able to cover their costs. Because medical foster homes are not considered institutional care, the VA is not allowed to pay for it directly. The average monthly fee, according to the VA, is $2,300, which most veterans cover with their VA compensation, Social Security and savings, said Nicole Trimble, Medical Foster Home coordinator at the Perry Point VA Medical Center in Maryland.

Shortly after, the VA Medical Center in Little Rock, Ark., launched an alternative — a pilot program that placed veterans in individual homes, at an average cost to the VA of roughly $60 a day, including administration and health care expenses, compared with upward of $500 a day for nursing home care.

And because veterans who are enrolled in the Medical Foster Care program must use the VA’s Home-Based Primary Care program, which provides an interdisciplinary team of health professionals for in-home medical treatment, the program saves the VA even more. One study showed that the home-based care has yielded a 59 percent drop in VA hospital inpatient days and a 31 percent reduction in admissions among those who participate.

More than 120 VA medical centers now oversee a Medical Foster Home program in their regions, and the VA has actively promoted the program within its health system.

It also has attracted bipartisan congressional support. In 2013, Sen. Bernie Sanders (I-Vt.) introduced a bill to allow the VA to pay for medical foster homes directly.

In 2015, former House Veterans Affairs Committee chairman Rep. Jeff Miller (R-Fla.) introduced similar legislation that would have allowed the VA to pay for up to 900 veterans under the program.

And in May, Rep. Clay Higgins (R-La.) raised the issue again, sponsoring a bill similar to Miller’s. “Allowing veterans to exercise greater flexibility over their benefits ensures that their individual needs are best met,” Higgins said in support of the program.

Frank Hundt watches TV in his bedroom at caregiver Joann West’s home in Baltimore on May 18, 2018. (Lynne Shallcross/KHN)

Foster care has been a blessing for the family of Hundt, who suffered a stroke shortly after his wife died and was unable to care for himself. Hundt’s daughter, Kimberly Malczewski, lives nearby and often stops in to visit her dad, sometimes with her 2-year-old son.

“I’m not sure where my father would be if he didn’t have this,” she said. “With my life situation — my husband and I both work full time, we have no extra room in our house, and we have a small child — I can’t take care of him the way Miss Joann does.”

Trimble, whose program started in 2012 and has five homes, said she hopes to expand by two to three homes a year. The VA will remain meticulous about selecting homes.

“There is a strict inspection and vetting process to be a medical foster home,” Trimble said. “We only will accept the best.”

It also takes a special person to be an “angel,” as the caregivers are referred to in the program’s motto, ”Where Heroes Meet Angels.”

For Hundt, it was the first time he’d been on a boat. And Stepney said it was nothing like the transport ships he and his fellow troops used in the late 1960s: “Well, I’ve gotten to travel, but it was mainly two years in Vietnam, and there weren’t any women around.”

When asked why she brought the pair along, West said caregiving is “a ministry, something you really have to like to do.”

“And you know how the saying goes,” she said. “When you like what you do, you never work a day in your life.”

‘They Deserve It’: In Foster Homes, Veterans Are Cared For Like Family

By Patricia Kime Photos by Lynne Shallcross May 30, 2018