An opinion forum on recent news and major policy issues.

OAKLAND, Calif. — A local environmental advocacy group last week launched a first-of-its kind monitoring project, installing air quality sensors in the densely packed neighborhoods near this city’s port to give the people who live and work there on-the-ground readings of pollutants that can seriously injure their health.

The West Oakland Environmental Indicators Project, in partnership with researchers at the University of California, Berkeley, installed the first 25 of the 100 sensors they plan to place in the area, whose residents have long been burdened by diesel pollution from ships, trains and heavy-duty trucks coming in and out of the port. The devices will be stationed in the residents’ yards, schools, senior centers and businesses.

Diesel pollution accounts for about 70 percent of the known cancer risk related to air toxins in California, according to the state Air Resources Board. The health effects of diesel also include chronic heart and lung diseases, such as asthma and chronic obstructive pulmonary disease (COPD), as well as decreased lung function in children. These, in turn, can lead to ER visits, hospitalizations and premature deaths.

Oakland’s asthma rate in children (19 percent) and adults (16 percent) is on par with Alameda County, where the city is located. But, asthma rates are higher for children in West Oakland, near the port, where the number of kids diagnosed with the disease is nearly 21 percent, according to data from the California Health Interview Survey (AskCHIS, 2014). Statewide, 15 percent of children and 14 percent of adults have had an asthma diagnosis.

The rate of asthma-related emergency room visits is nearly twice as high in Oakland as in Alameda County, according to the county health department.

California has reduced diesel pollution in a number of ways, including programs to retrofit trucks with equipment that makes them run more cleanly and a gradual phaseout of older trucks. Since 1990, diesel pollution in the state has decreased by 68 percent, according to the Air Resources Board.

Government and business investments to clean up trains, ships and trucks operating at the Port of Oakland have dramatically reduced diesel particle emissions there by 75 percent since 2015, according to a report released last year by the port.

However, the passage of a sweeping gas tax bill by state lawmakers last Thursday to pay for road repairs contains a provision that could make it harder for the state to regulate emissions from the trucking industry. 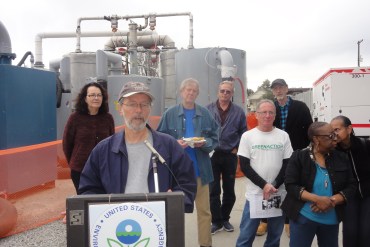 Last week, the West Oakland Environmental Indicators Project filed a federal complaint, alleging that by forging ahead with a planned port expansion, the city and Port of Oakland are ignoring the disproportionate health impacts on West Oakland residents. Half of the residents are African-American, and the neighborhood has one of the highest poverty rates in the county.

Beveridge says people in West Oakland are still concerned about the dangers of dirty air, and they think more detailed monitoring is needed to clearly understand the quality of the air they are breathing.

California Healthline interviewed Beveridge last week. His comments have been edited for length and clarity.

Q: What are the sources of pollution in the neighborhood?

West Oakland is surrounded by three freeways. The primary route for trucks is Interstate 880 on the south and west sides of the community and upwind of West Oakland. The biggest sources of diesel and fuel oil emissions are the port and its various activities — ships, cargo handling equipment, railroads and trucks. The freeway is next, upwind of the neighborhood.

Q: What do we know about exposure to diesel pollution and health?

Diesel pollution has been known for a decade to have a significant health impact. Today, it’s seen as a cause of asthma, of COPD, lung cancer and brain cancer — because they found a component in diesel emissions that can cross over the blood-brain barrier. The U.S. Environmental Protection Agency said that diesel emissions nationwide were potentially the cause of 85 percent of all respiratory illness in the country. Millions and millions of people suffering from completely preventable illnesses.

Q: What has California done to address the problem of dirty diesel?

In the early 2000s, the state needed to rebuild the freight infrastructure — freeways, bridges, railways and ports. Moving cargo was becoming a key industry in California. [The state] set a target of reducing diesel emissions by 85 percent of 1994 levels, so we’re still trying to reach that 85 percent reduction.

In 2008, the trucks carrying cargo were targeted first because they operate so close to port and fenceline communities. For a year, the state provided incentives for the trucking industry to upgrade their hardware. … In [the Port of] Oakland, [the state provided] $30 million to $40 million to help truckers buy diesel particulate filters (DPS). Those filters used new technology to reduce diesel emissions from trucks by 85 percent, and older trucks were phased out.

Q: There’s been progress on cleaning up the air, but is there still a problem?

Even though the port projects will achieve the 85 percent goal by about 2020, because of cargo volume growth, it will exceed [the emissions cap set by] those goals again by 2028. … [Even with the 85 percent reduction], the 15 percent left over is still a significant amount if you look at it in aggregate, [and] that number will grow.

Q: Why is additional air monitoring in the neighborhood needed, and what data will be collected?

The current project is an attempt to look at the finely granular picture of air quality on the ground where people live. The regulatory agencies set ambient air standards to regulate air quality. That means they rely on a broad network of monitoring stations about every 2 kilometers to determine the air quality in the region.

We’ve always felt measuring and regulating ambient air doesn’t do much for people who live next to power plant, a port or freeways, because these places are the sources of pollution. [Regulators should] look at the source [of pollution] and regulate cleaning up the source of the problem. That’s been quite a struggle. When you talk about sources of pollution, you’re talking about industry spending money to clean emissions. It’s easier to talk about amorphous vehicle owners and freeways and make a rule for millions of people who own a car. Those people don’t fight back.

Q: How will the data from personal air quality sensors be used?

The monitoring project we’re doing now will take ambient air and break it into 100 little bits. What are we really breathing if we look carefully at local air in the front yard?

Our goal with the data is to take a better look at traffic and land use in the community, areas where cities do have some control. When you look at zoning — how cities zone properties for business [or residential] uses — it has a significant impact on a very hyperlocal scale. A couple of hundred feet can make a difference in terms of the quality of air people breathe.

We might want to regulate the placement of child care centers, senior centers, health centers or housing for that matter.

Q: President Donald Trump has proposed slashing the EPA’s budget by nearly a third. How would that affect communities?

The bottom line, if you roll back environmental protection, more people will get sick and die. Environmental protections initiated in this country during the past 50 years under [President] Richard Nixon cleaned up air and water. People who were drinking polluted water are now drinking clean water, and people who were breathing polluted air are now breathing clean air. What the [Trump] administration is doing now will cause people to die. That’s the simplest way to describe what is happening.

What the people following Donald Trump, the administration and business don’t understand is you can’t get smaller government and pay less taxes if you have millions of people going to the hospital because they don’t have money and showing up with environmental exposure. That’s how [former governor Arnold] Schwarzenegger was able to persuade a Republication legislature to do something [about diesel pollution]. He understood you can’t get smaller if the government is spending millions on public health. You can’t get a stronger economy if you have lost workdays because people are ill.