Something like 10 million Americans — give or take a few million — have gained health coverage thanks to the Affordable Care Act. And here’s one way to put that in perspective: In just six months between late 2013 and early 2014, the nation’s persistently high uninsured rate fell by a staggering 25%.

So does this mean that the nation’s already busy emergency departments are about to bust at the seams, as some Obamacare critics suggest? That states still nixing the Medicaid expansion are right to worry it would overcrowd their hospitals?

Kominski, director of UCLA’s Center for Health Policy Research, and colleagues looked at what happened when hundreds of thousands of Californians signed up for a proto-version of Obamacare: the Low Income Health Plan, better known as the LIHP. And UCLA’s new study — released on Wednesday — tracks nearly 200,000 enrollees in the LIHP between 2011 and 2013.

So while we can’t yet know the fates of the millions of Americans newly covered through the ACA, we do know what happened when hundreds of thousands of Californians got covered through the LIHP: Many rushed to get treatment for unmet medical needs, driving up utilization … and then resumed more normal patterns.

“We see an increase in utilization in the first year, and especially in the first few months,” Kominski tells California Healthline. “But then there’s a dramatic drop-off.”

“I think our results clearly show that this a temporary, not permanent phenomenon.”

But the law’s also helped catalyze the health policy landscape, pushing researchers to dig into some hugely important policy questions.

Namely, if you give someone health insurance, does that person really get healthier? How many lives might the Medicaid expansion actually save?

Recent studies have attempted to find solutions. “All of those questions still exist, because each expansion has its own context,” says Harvard’s Ben Sommers, who led some of this research. But we’re starting to get answers, he suggests.

For instance, the notion that having health insurance has no positive health effects has been increasingly debunked. “That has become a weaker and weaker argument,” Sommers says.

“The argument that providing health insurance provides no health benefit … my response to that is anyone who [still] thinks that’s true should voluntarily go uninsured for the next five years,” Kominski adds. “I’d love them to report back to me how that worked out.”

At the same time, there are still major, open questions about how coverage expansion affects health spending and consumer utilization. For now, many in the policy community are looking to the influential Oregon Health Insurance Experiment for data, given that study’s unique construction as a randomized controlled trial. In one major development, researchers this year suggested that Medicaid expansion in Oregon had led to a surge in ED visits.

The findings from the Oregon study have helped some states pause on opting into the ACA’s Medicaid expansion. And while the findings may not be totally generalizable to other states, they’re a good reminder that coverage expansion doesn’t necessarily save money or come with no costs — a persistent myth championed by supporters of the health law, researchers note.

“When you give people coverage, they use more health services,” Sommers notes. “And sometimes they use the things we don’t want them to use.”

The Oregon research is “excellent,” Kominski agrees. But “I think the Oregon study, in a sense, has been the outlier. It calls into question some other studies, because it doesn’t show across-the-board positive benefits.”

“That’s why I think our study is particularly interesting,” Kominski adds. “It’s not directly comparable to the Oregon Health Insurance Experiment — [but] it provides a different view of looking at the issue.”

What the LIHP Shows Us

In their study, UCLA researchers separated the new LIHP enrollees into four distinct groups, based on their expected pent-up demand. (In some cases, the newly enrolled individuals had used county indigent services, or had been covered by another low-income health coverage program, or both. These enrollees were expected to have less pent-up demand for care, because they’d been using health services.)

And in the most striking finding, the UCLA researchers determined that patients with the highest expected pent-up demand — the LIHP enrollees who had lacked health coverage and hadn’t previously sought out medical care — visited the ED at a rate of about 600 visits per 1,000 people in the first three months after receiving LIHP coverage.

But within the year, the rate of ED visits for this group had slowed, before stabilizing at about one-third the earlier level. Essentially, these patients been putting off their pent-up health care needs, Kominski says, and once those demands were met, they began using the health care system at a more normal level, closer to what was seen among the other LIHP enrollees. 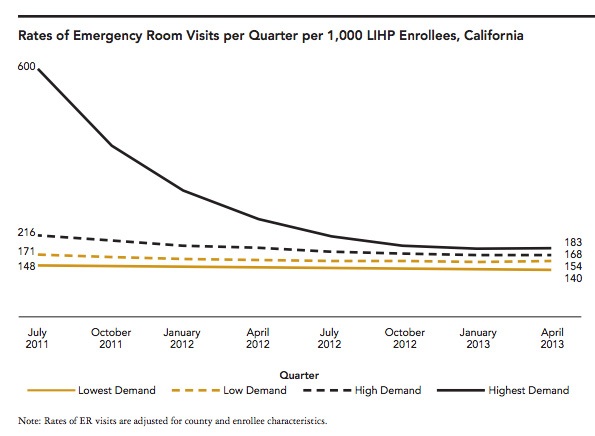 The researchers found a similar spike-and-slowdown with inpatient utilization, too.

“We think that this is a good indication of what happens under the Medi-Cal expansion, because this is the Medi-Cal population,” Kominski says.

And what that means moving forward, he argues, is that the Medi-Cal program isn’t going to experience that pent-up demand — at least for the hundreds of thousands of Californians who were enrolled in the LIHP program, because they’ve already had a chance to get treatment.

“The findings are really good news for the state of California,” Kominski says. “And it’s good news for society’s perspective, too.”

Here’s what else is making news on the road to reform.

Can you keep Kynect but kill Obamacare? Running for re-election in Kentucky, Republican Senate Majority Leader Mitch McConnell has argued that the state’s popular health insurance exchange can live on even if the ACA is struck down. But that argument seems like a sleight of hand, John Dickerson writes for Slate.

Can you keep the private option but kill Obamacare? McConnell’s not alone in trying to thread the needle on the ACA in a Senate race. In Arkansas, Republican Senate candidate Tom Cotton has repeatedly affirmed his opposition to Obamacare, but danced around the issue of dropping the state’s “private option,” David Ramsey reports for the Arkansas Times.