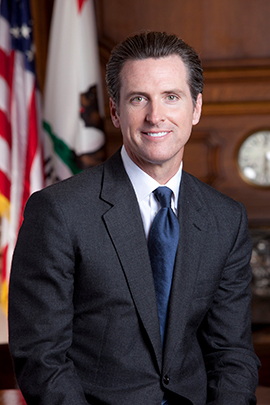 Newsom is among several candidates likely to run for governor next year and is proposing a universal health plan as part of his campaign. He said he’s still coming up with the details but is drawing inspiration from the Healthy San Francisco program that he signed into law a decade ago as the city’s mayor. It uses a mix of public dollars and employer contributions to help the uninsured.

Other elected Democrats have recently endorsed the idea of a single-payer system in California. State Sen. Ricardo Lara (D-Bell Gardens) filed legislation last month that would take a first step toward such a system.

Generally speaking, universal health care and single-payer plans can use a variety of means to achieve coverage for all (or nearly all) residents.

These moves come as House Republicans are proposing major cutbacks to Medicaid and to federal subsidies Californians use to purchase health insurance. The Trump administration said it wants to give states more flexibility in running their health care programs, but it’s unclear whether that stance would apply to a deep-blue state like California.

Could universal health care coexist with Republican health plans in Washington? Chad Terhune, a senior correspondent at California Healthline and Kaiser Health News, discussed the question on Wednesday with A Martinez, host of the “Take Two” show on Southern California Public Radio.

Universal Health Coverage In California: Is It Even Possible?