As residents of California’s Coachella Valley escape the blazing heat this summer in air-conditioned living rooms, movie theaters and cars, many will hear this upbeat but cheesy refrain:

“Dump it! Drain it! Scrub it clean! Your weekly mosquito prevention routine.”

These commercials feature local mosquito-control officials grinning goofily at the camera while they follow the jingle’s instructions to eliminate pools of water that harbor insects they are branding as “bloodthirsty killers.”

Authorities in the Coachella Valley and other regions of the state are trying to drive home the message that mosquitoes are a serious and growing threat to residents’ health. Using jingles, disaster drills and even drones, they are spreading the word and preparing for outbreaks.

Jill Oviatt, a spokeswoman for the Coachella Valley Mosquito and Vector Control District, calls the ad campaign an attempt to “brainwash” residents and force them to rethink mosquitoes as more than buzzing, irritating, itch-making pests. With climate change and the spread of diseases across international boundaries, they pose a lethal threat. 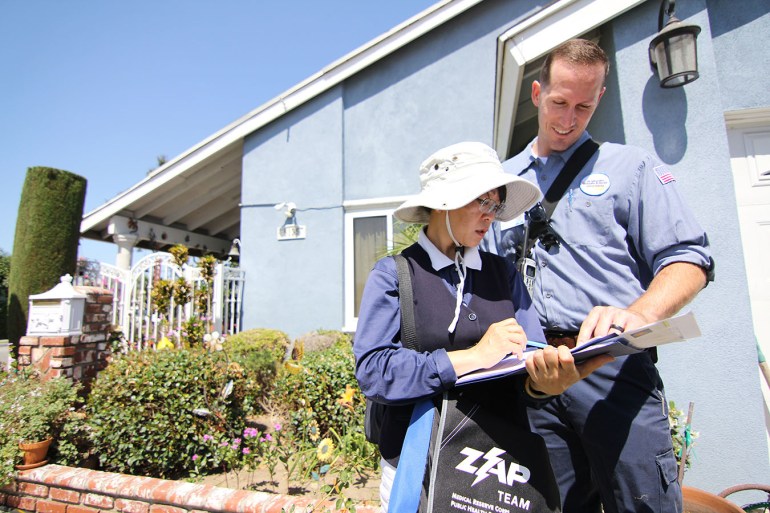 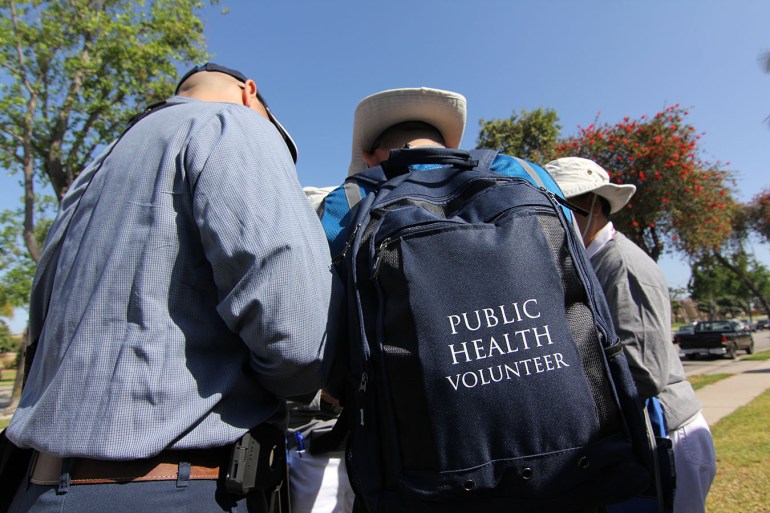 Last year, Californians contracted 553 cases of West Nile virus, and 44 people died. Since 2003, the state has logged more than 6,500 cases of the disease. It usually causes minor symptoms, if any, but in some circumstances it can damage the nervous system. Last week, the California Department of Public Health confirmed the state’s first human cases of West Nile virus this year.

Nationally, 2,002 people contracted West Nile last year and 121 died, according to preliminary data from the Centers for Disease Control and Prevention.

California had more mosquito-borne diseases from 2004 to 2016 than any other state, followed by New York and Texas, according to the CDC.

New and serious mosquito-borne diseases — including Zika, chikungunya, yellow fever and dengue — are appearing in the U.S. carried by species typically found in Africa and Asia. Unlike the mosquito species native to the United States, these invasive mosquitoes can transmit diseases from person to person.

“I think why you’re seeing this rush for innovation is because, with these invasive mosquitoes, this is a race against time,” Oviatt said.

The invasive mosquitoes — Aedes aegypti and Aedes albopictus — and the diseases they carry have migrated from region to region. Since 2016, invasive mosquitoes have infected 231 people with the Zika virus within the United States, mostly in Florida, according to the CDC. Zika can cause birth defects if a pregnant woman is infected, including microcephaly, miscarriage and Guillain-Barré syndrome.

Chikungunya, a debilitating illness of high fevers and horrific bone pain, was first seen in Europe in 2004, in the Caribbean in 2013 and in the U.S. in 2014.

The invasive mosquitoes first arrived in California in 2011 and have spread to 17 counties so far. Authorities expect them in all 58 counties soon, said Dave Heft, president of the Mosquito and Vector Control Association of California.

Oviatt pointed to an example in Texas of what can happen when communities aren’t adequately prepared for mosquito-borne diseases. A statewide outbreak of West Nile virus there in 2012 resulted in nearly 1,900 cases of the illness and 89 deaths. 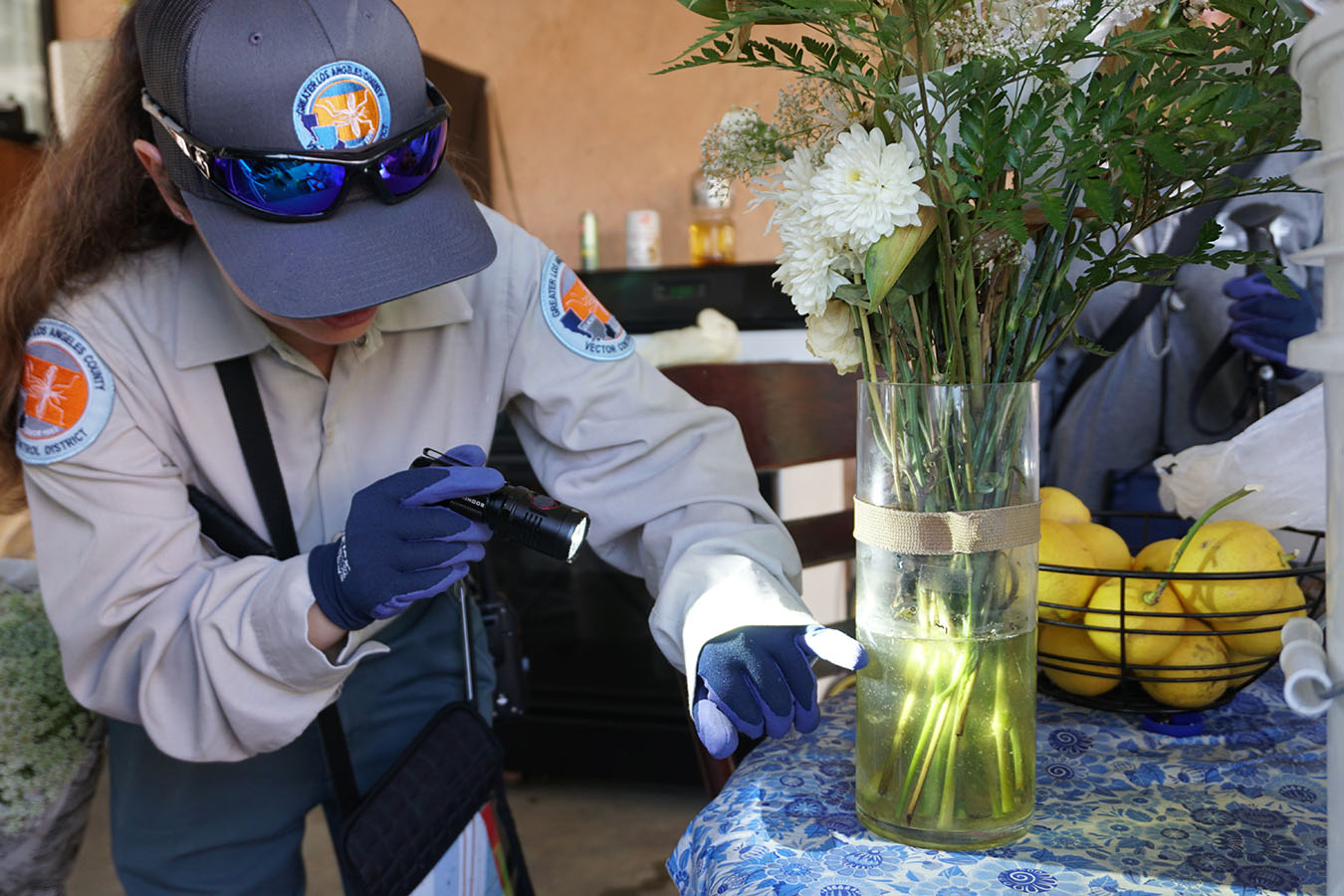 Authorities knocked on doors and scoured yards in Santa Fe Springs, practicing the steps they would take in the event of a real emergency, said Levy Sun, a spokesman for the San Gabriel Valley district.

In three hours, officials and volunteers surveyed more than 130 homes. They peered into flower vases with flashlights, dumped out standing water in buckets and showed residents where mosquitoes might be lurking in their yards and homes. Unlike the native species in California, which thrive in moist, rural environments, Aedes aegypti and albopictus larvae can survive for months in small amounts of water — in vases, water bottles and even bottle caps.

“If we can’t get people to get rid of the containers in their yards and trash and stuff like that, these mosquitoes are gonna breed forever,” Conlon said.

Back in Coachella Valley, where the invasive mosquitoes have made a home since 2016, officials have spent $40,000 on the English- and Spanish-language advertisements airing on six TV channels, in five movie theaters and on nine radio stations. The ads also are appearing in two local newspapers and in social media. 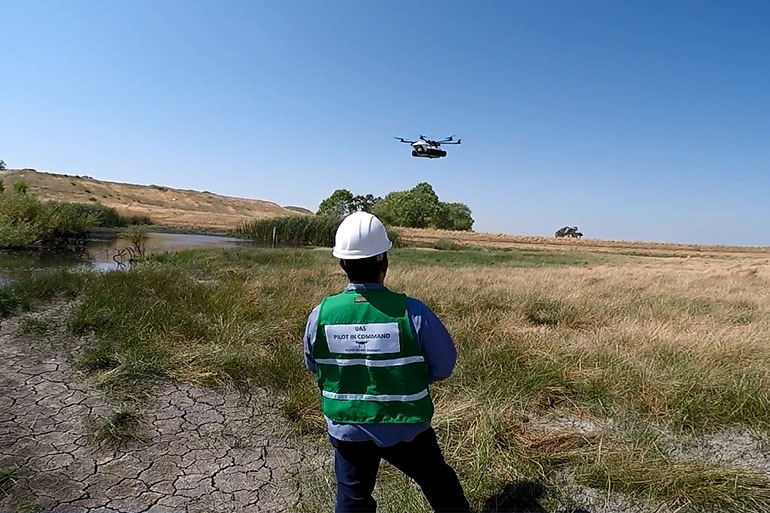 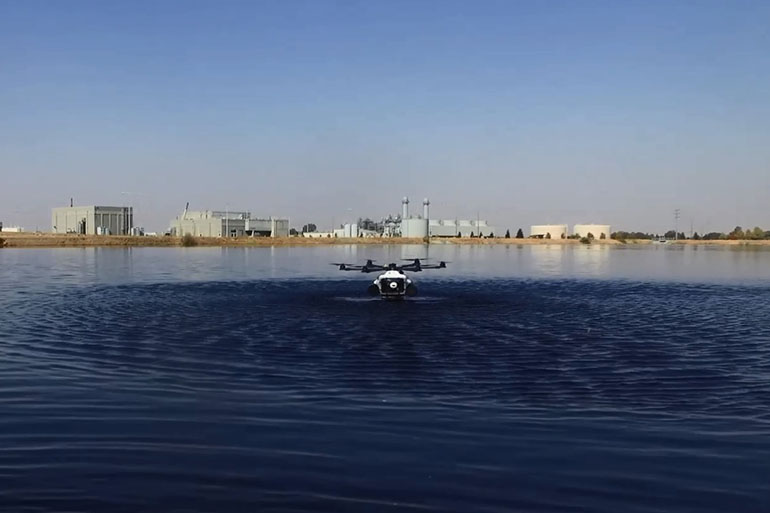 In Placer County, which so far has not seen the invasive mosquitoes, authorities have engaged in cutting-edge surveillance, lowering unmanned drones into standing water to photograph larvae.

Placer is the first county in California to employ this technique, and it may experiment this summer with using the drones to apply larvicide, said Ada Barros Heiser, spokeswoman for the Placer Mosquito and Vector Control District.

“We’re always looking to innovate,” Barros Heiser said. “When the drone technology became available, some of our key thinkers in mosquito control said, ‘Well, how would this apply to us?’”

Using Drones And Ditties To Help Hunt Down Disease-Bearing Mosquitoes