GOP leaders are seeking to defund Planned Parenthood, President Donald Trump has vowed to appoint abortion foes to the Supreme Court and the Affordable Care Act is on track for repeal. What does it all mean for reproductive health care?

Julie Rovner, chief Washington correspondent for Kaiser Health News, appeared with reproductive health care advocates on KQED’s Forum to discuss the implications of the proposed changes, both in California and nationally. (California Healthline is independently published by Kaiser Health News.)

Rovner reported recently for KHN that efforts to defund Planned Parenthood through the budget reconciliation bill aimed at abolishing Obamacare would be more difficult than it might seem. It’s complicated in part because Planned Parenthood gets its funding from several different government sources.

According to the organization, about 75 percent of its support comes from the Medicaid program to pay for direct medical services provided to low income patients. These services include contraception, cancer screenings and testing and treatment for sexually transmitted diseases.

The remaining 25 percent of Planned Parenthood funding comes from other sources, primarily the Title X federal family planning program. The Congressional Budget Office estimated last year that the group gets approximately $390 million annually from Medicaid and $60 million from Title X.

And according to Rovner, taking away Planned Parenthood’s access to Medicaid funding would require a change in the federal law that guarantees most Medicaid patients a choice to use any qualified provider. 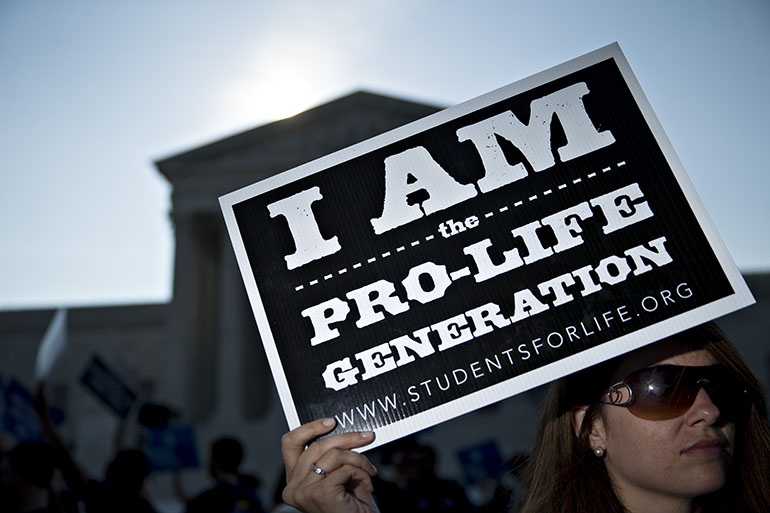 An anti-abortion advocate holds a sign outside the U.S. Supreme Court before rulings in Washington, D.C. on June 27, 2016. (Andrew Harrer/Bloomberg via Getty Images)

Even so, those who want to defund Planned Parenthood say they cannot support any organization that provides abortions. And President Trump agrees with them. In a September letter to supporters, he said he was committed to “nominating pro-life justices to the U.S. Supreme Court,” ending late-term abortions and reallocating Planned Parenthood money to community health centers that serve women.

“Together we can form this vital coalition so that [Vice President] Mike Pence and I can be advocates for the unborn and their mothers every day we are in the White House,” Trump wrote.

To explore these and other questions, Rovner was joined on Forum by Amy Everitt, state director of NARAL Pro-Choice California, and Lupe Rodriguez, public affairs director at Mar Monte Planned Parenthood. The host was Mina Kim.

The conversation can be heard above in its entirety.

What’s Next In Reproductive Health Care?