Three proposed health insurance mergers are drawing the skeptical eye of a key California regulator, who fears too much consolidation in the industry could weaken competition and result in higher premiums for consumers. 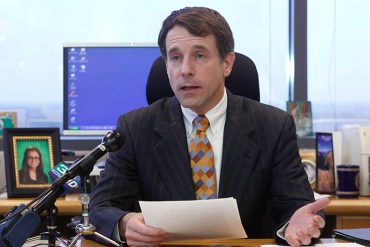 California Insurance Commissioner Dave Jones is highly skeptical of pending mergers among health insurers. In a recent hearing, he pointed to academic studies showing that premiums rise when insurance companies consolidate. Jones, who said last fall he will run for state attorney general in 2018, is expected to weigh in on Centene’s proposed $7 billion acquisition of Health Net. (AP Photo/Rich Pedroncelli)

Given the contentious tone of a recent hearing on one of those mergers, conducted by California Insurance Commissioner Dave Jones, it seems possible he could nix the deal.

All three require approval by the Department of Managed Health Care (DMHC). The Centene-Health Net deal also needs a signoff by the California Department of Insurance (CDI), headed by Jones.

Because the proposed deals involve companies that operate nationally, they also need the approval of health care regulators in other states.

In California, health insurers are regulated either by the DMHC or the CDI — or by both. That bifurcated regulatory system can sometimes make it difficult to ascertain where authority lies, and whether Jones wields any power in the Anthem-Cigna and Aetna-Humana deals.

Large insurers sell a wide range of health plans, which is why their regulation is often split between the two agencies. But the DMHC has wider powers because it regulates 90 percent of policies sold in the state.

The DMHC has not revealed much of its thinking on the pending deals. That is not the case with Jones, who frequently speaks out publicly and has announced plans to run for state attorney general in 2018.

Jones spent six hours in a hearing Jan. 22 grilling executives and industry experts on the proposed Centene-Health Net merger. Not only did he seem prepared to impose stiff conditions on that deal, but his staff entertained the notion of rejecting it outright.

The three — Laura Antonini, staff attorney at Consumer Watchdog; Tam Ma, policy counsel at Health Access California; and Dena Mendelsohn, staff attorney for Consumers Union — replied that they leaned toward imposing conditions on the merger to mitigate their concerns, rather than rejecting it outright.

But Jones himself made clear that, “the commissioner may disapprove a transaction of this type for a number of reasons.”

The tone of the DMHC’s hearings on the mergers has been considerably more polite. If that’s any indication, the prospect of outright rejection, at least in the case of Centene-Health Net, seems more likely to come from the insurance commissioner.

“He could reject a deal if it’s not in the public interest, said Anthony Wright, executive director of Health Access California, a consumer advocacy group based in Sacramento.

But Wright added that the public interest could be served by imposing the right conditions, not necessarily snubbing the Centene-Health Net merger altogether. He said his advocacy group hasn’t publicly opposed any of the three pending mergers, because he’d rather see them improved by adding conditions such as bigger provider networks.

David Balto of the Coalition to Protect Patient Choice, which lobbies against consolidation in the health insurance industry, takes a harder line.

“There’s a long history here and it’s pretty clear: health insurance company mergers result in higher premiums and less choice for California consumers,” Balto said. “Efficiencies do not pass on to consumers. And this is a market where there is paltry competition at best.”

Jones seemed to echo that sentiment in the hearing, when he pointed to recent peer-reviewed studies that show a rise in premiums after health insurance companies merge and noted that there are no countervailing studies showing that premiums drop.

Industry advocates argue that greater efficiencies in the merged companies can result in cost savings that are passed on to consumers.

Charles Bacchi, president and CEO of the California Association of Health Plans, noted that health insurers are required by law to spend a specified percentage of premium dollars on patient care.

“Health insurance in California is heavily regulated, with requirements that all plans offer robust benefit packages and the majority of premiums go back into direct medical care,” Bacchi said in an email.

Insurance companies also believe that increased scale will give them bargaining clout in rate negotiations with hospitals and other medical providers. The same rationale applies to the current wave of consolidation among hospitals.

There is some precedent for a state regulator putting the brakes on a large merger.

John Garamendi, California’s insurance commissioner in 2004 when Anthem wanted to buy Wellpoint Health Networks for $17 billion, temporarily nixed the proposed deal. He ultimately approved it after Anthem appealed his decision and offered about $100 million in concessions, in addition to dropping a lawsuit it had filed against the commissioner.

The DMHC said little about the current merger proposals beyond suggesting it would carry out its due diligence.”The DMHC examines proposed mergers to ensure that the enrollees of all plans involved in the transaction have continued access to appropriate health care services,” Rodger Butler, the agency’s information officer, said in an email.

“As the largest regulator of health plans in California, our primary focus is to ensure compliance with the strong consumer protections and financial solvency requirements of the Knox-Keene Act [which regulates HMOs in California],” Butler said.

There is another option for regulators that falls between approval with conditions and outright rejection.

If the conditions imposed are too onerous for insurers, they might back out of a proposed deal.

That scenario played out last year when Prime Healthcare proposed an acquisition of six Daughters of Charity hospitals in California. Attorney General Kamala Harris set strong conditions on the sale – so strong that Prime dropped the effort.

“Conditions can be a form of rejection, then it’s up to the entities to see if the deal is worth going forward,” Wright said. “It’s rare that insurers would walk away from conditions, but it’s certainly not rare to see conditions.”

Neither the DMHC nor the CDI have revealed a timeline for their decisions on the pending mergers.

Will A California Regulator Halt The Centene-Health Net Deal?