There’s a pharmacy in downtown San Jose where the drugs are free. No copays, no deductibles, no proof of income or ID required — just a doctor’s prescription.

Tucked away in a spartan government building, the Better Health Pharmacy is staffed by volunteer pharmacists and run by the Santa Clara County Public Health Department. The drugs it dispenses are donated, mostly by nursing homes, intended for people who can’t afford their prescribed medications.

The pharmacy is the only one of its kind in California, and one of just a handful nationwide.

As with anything that comes for free, there are a few catches.

Because the pharmacy relies on donations, there’s no guarantee it will have the drugs you need when you need them. Patients can check an online list for available drugs, or call the pharmacy directly, before they show up. If a drug’s not available, patients are put on a waiting list and contacted if and when the right donations arrive. For now, the pharmacy’s open only for a few hours each day, four days a week.

And another caveat: The pharmacy dispenses no hardcore painkillers like Vicodin or OxyContin, or any other controlled drugs.

The pharmacy has dispensed 700 prescriptions since opening quietly in August, said Johanna Silverthorne, a spokeswoman for the county public health department. On Tuesday, the pharmacy hosted a “grand opening” celebration and Santa Clara County supervisors will present a formal commendation to its staff and volunteers.

That a free pharmacy is needed in San Jose speaks volumes about economic disparities in a metropolitan region Bloomberg Business recently dubbed the richest in the nation. San Jose’s homeless population is among the country’s largest.

“Because of how expensive things have gotten here,” she said, “people are making decisions like, do I pay my heating bill or do I get my prescription?”

Rommy Garcia, 32, couldn’t believe it when a doctor at a community health clinic told her there was a place she could get her diabetes medication for free, no questions asked. The single mother of two couldn’t afford to buy her own insurance and her immigration status under the Deferred Action for Childhood Arrivals Act didn’t allow Garcia to qualify for any kind of government health insurance except emergency Medi-Cal.

Recently diagnosed with Type 2 diabetes, Garcia needed a drug called metformin. She didn’t know the generic form of the drug could be purchased inexpensively at chain stores like Walmart and Walgreens — she said she’d been told it might cost hundreds of dollars per month. Garcia was thrilled to hear about the pharmacy.

“I was thinking, how am I going to get the money for this?” said Garcia. “I was so relieved.”

Jinky Balane of San Jose heard about the pharmacy from a fellow shopper at Walmart, so she went there to fill a prescription for her 8-year-old son’s asthma inhaler. She and her son have been uninsured since January, after she decided that she could no longer afford the family health insurance policy she bought after she was laid off last year from her job as an electronics buyer. At roughly $700 monthly, her premiums and copayments were too high, Balane said. 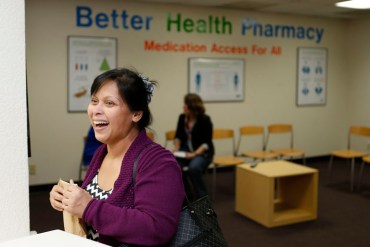 Jinky Balane picks up asthma medicine for her son on Feb. 10, 2016 at the Better Health Pharmacy, which is staffed by volunteer pharmacists and run by the Santa Clara County Public Health Department in downtown San Jose, California. (Josie Lepe/Bay Area News Group)

“This place is awesome,” Balane said. “Once people know about it, the pharmacy is going to be bombarded.”

The Better Health Pharmacy is possible because of a California law passed in 2005 that allowed counties to accept and redistribute previously sold, unexpired and unopened prescription medications to people in need. (Drugs can’t be donated by individuals.) Typically, these drugs would be thrown away or destroyed after patients die or no longer need them.

Santa Clara County Supervisor Joe Simitian, who sponsored the law when he was a state senator, said Stanford students entered the prescription recycling idea in his “There Oughta Be A Law” contest.

“It makes sense in terms of health care, and it makes sense environmentally,” Simitian said. “It also makes sense from a fiscal standpoint: if you can reuse these drugs, then those are drugs that the taxpayers don’t have to pay for.”

Other states have passed similar laws, including Iowa, which is believed to have the nation’s largest prescription drug reuse program.

Nursing homes from across the state donate drugs to the Better Health Pharmacy through Palo Alto-based Sirum, founded by Stanford University students. The nonprofit serves as a matchmaker, offering logistics and record keeping tools that allow health facilities, manufacturers, wholesalers, and pharmacies to safely donate unused medicine to safety-net clinics and pharmacies, avoiding the cost and hassle of destroying it properly.

At first, the donated medications were distributed at a number of county-run pharmacies, but then health officials realized they could create a stand-alone pharmacy to dispense the donated medicines.

“This is like a dream come true for pharmacists,” Pham said. “Our goal is to bridge the gap — to help people get access to the medicines they need, without having to ask how they’re going to pay for it.”