Women who have high-risk pregnancies or complications in childbirth are up to eight times more likely to suffer heart disease later in life. And many mothers — and their doctors — are unaware of the danger.

Emerging research shows heart disease is a long-term threat for women who develop diabetes or high blood pressure during pregnancy, for example, or those whose babies are born prematurely or precariously small.

Yet doctors do not typically advise women about their risk or counsel them to watch for symptoms, said Noel Bairey Merz, a cardiologist and director of the Barbra Streisand Women’s Heart Center at Cedars-Sinai Heart Institute in Los Angeles.

Bairey Merz said doctors can see heart attacks and strokes coming, often 10 or 20 years ahead of time, if they are on the lookout. “This isn’t rocket science,” she said. “We just have to figure out how we can find the women who are at risk.”

Heightened awareness of the link between pregnancy complications and heart disease is prompting greater outreach to the public and collaborative research between cardiologists and obstetricians. That could help “make tremendous strides toward reducing and preventing heart disease in women,” said Bairey Merz.

Cedars-Sinai recently started following a small group of women who’ve had pregnancy or labor complications to further explore the heart disease connection. In a separate study, Bairey Merz and other researchers funded by the National Institutes of Health are tracking 5,000 new moms at eight sites nationwide — including Cedars — to fill gaps in knowledge about heart health and develop recommendations for physicians.

The Women’s Heart Alliance, an advocacy group started by Cedars-Sinai and New York-Presbyterian Hospital/Weill Cornell Medical Center, also works with obstetricians and other providers to raise awareness among women and their doctors.

“We’ve got a big advocacy and education piece that we should be doing together,” said Barbara Levy, vice president of health policy for the American Congress of Obstetricians and Gynecologists.

Levy said education is critical because it reduces the likelihood that women or their doctors will dismiss symptoms and concerns that should be taken seriously. Cardiologists and women’s health care providers are in a unique position to drive the research agenda, Levy said. About 80 percent of U.S. women give birth to at least one baby, and one-fourth have complications during their pregnancies or labor. Researchers are still trying to determine why such complications are linked to later heart problems. Among hypotheses: Pregnancy might contribute to vascular problems or unleash preexisting tendencies.

“Pregnancy can really mimic the stressors of age,” said Margo Minissian, a nurse scientist and researcher at the Cedars-Sinai Heart Institute. “Pregnancy could essentially be serving [as] a woman’s first physiological stress test.”

Minissian said that women who have had pregnancy or labor complications should tell their primary care doctors and have annual screenings for high blood pressure or other potential health problems. The American Heart Association and American Stroke Association recommend, for example, that women who have had preeclampsia — a potentially life-threatening spike in blood pressure during pregnancy — be evaluated for heart disease risk within one year of giving birth. Some women will need to be medicated and may be referred to a cardiologist.

But most women who have had complicated pregnancies need not see a cardiologist right after giving birth, Levy said — they should just eat healthfully, be active and get enough sleep. Immediately referring all of these women to cardiologists could result in undue anxiety and unnecessary medical tests, she said. “It will cost a lot of money and a lot of her time while she is dealing with a baby.”

As part of the Cedars-Sinai project, Minissian screens certain women for cardiovascular risk within six months of delivery and follows up with them every year. She also tries to help them understand their risk and lead healthy lives to “avoid the whole heart disease trajectory altogether.”

“These women are going to have their eyes wide open,” Minissian said. “They are going to be looking for it and they won’t allow people to pat them on the back and say, ‘Oh don’t worry about that high blood pressure.’”

One of Minissian’s patients, Lara Hogan, gave birth to her son, Zion, in May 2016.

Sitting in her living room in Topanga, Calif., Hogan recounted how she had been monitoring her blood pressure during the pregnancy because she was treated for hypertension in the past. Then, during her 36th week, her pressure spiked — a sign of preeclampsia. 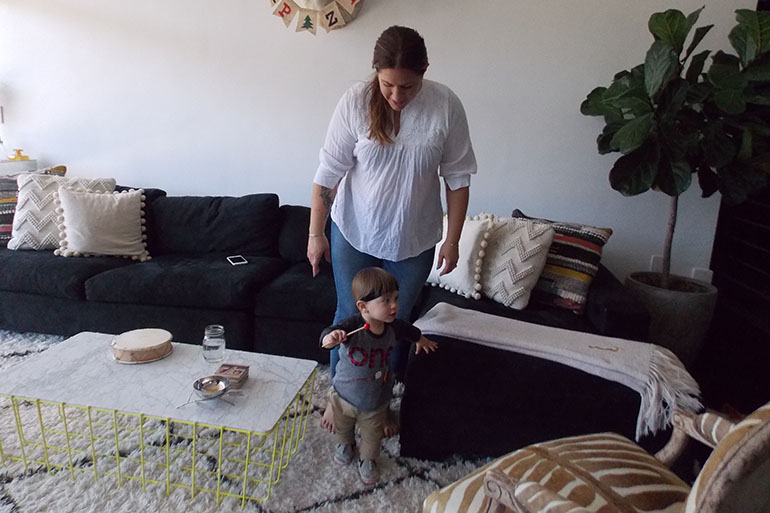 Women are up to eight times more likely to develop heart disease if they have high blood pressure or diabetes during pregnancy — or if their babies are born too small or too early. Lara Hogan gave birth to son Zion prematurely in May 2016 and now regularly monitors her blood pressure. (Anna Gorman/California Healthline)

Hogan and her husband, Chad, headed to Cedars-Sinai, where doctors told her they needed to deliver the baby that night. But her blood pressure did not come down after giving birth. In fact, it kept rising.

“They had someone standing at my bedside monitoring me in case anything happened,” Hogan recalled. “I guess they were so nervous that I was gonna have a stroke.”

Zion stayed in the neonatal intensive care unit for eight days before he was released. Hogan went in and out of the hospital as doctors tried to lower her pressure.

“It was a nightmare,” she said. “All I dreamt about was this moment for so many years. It was like the opposite of everything I thought it would be.”

Finally, doctors succeeded in bringing her pressure down and referred her to a postpartum heart health program that Minissian leads. Over the next several weeks, Minissian and others helped Hogan take the right dose of medication and avoid the hospital.

Now, Hogan checks her pressure on most days and plans to continue seeing doctors to manage her long-term cardiac risk. Zion, who recently celebrated his 1st birthday, just started walking and likes to play with his toy xylophone and drums.

Hogan hopes to have another baby soon, so she has been seeing Minissian to ensure her pressure is well-controlled before she gets pregnant again. She knows she is at risk for heart disease later in life because of her complications in pregnancy.

“As much as I don’t want to be thinking about my future heart health or worrying about what’s going to happen when I am older, this is priority No. 1 for my health right now,” Hogan said. “For the sake of my son and my future children.”