Skip to content
This story also ran on U.S. News & World Report. This story can be republished for free (details).

DELANO, Calif. — Daisy Leon struggles to sit still and read the letters on the eye chart. Her responses tumble out in a quiet, confused garble.

The 6-year-old kindergartner had her eyes examined for the first time on a recent Thursday morning. Although she hadn’t complained about headaches or blurry vision, her grandmother noticed she’d been inching closer to watch television.

After Daisy’s failed attempts at reading the eye chart, Mamauag-Camat inspects the little girl’s eyes through a phoropter and writes her a prescription for glasses.

At least 20% of school-age children in the U.S. have vision problems. But according to the Centers for Disease Control and Prevention, fewer than 15% of children get an eye exam before entering kindergarten. Because vision problems tend to worsen the longer they go undetected, many children suffer even though there are often simple, relatively inexpensive solutions such as prescription glasses.

Half of the states plus the District of Columbia require screenings or exams for preschoolers, according to the National Center for Children’s Vision & Eye Health. But California has no such requirement, said Xuejuan Jiang, an assistant professor of research ophthalmology at Keck School of Medicine of USC. California does require them for older children.

“The system in California is not as good as it can be,” Jiang said.

In much of California’s Central Valley, where roughly 1 in 5 people live in poverty, two school districts are working with two nonprofits, the Advanced Center for Eyecare and OneSight, to provide vision care to Kern County’s underserved and uninsured children.

Many of the neediest are the children of farmworkers.

“We are an agriculture-based community,” said Linda Hinojosa, coordinator of health services for the Delano Union School District. “Most of our families harvest table grapes 12 hours a day, with very limited time to take their children in for an eye exam.”

The program, funded by the nonprofits and the school districts, operates five school-based clinics in Bakersfield and Delano. Students receive comprehensive eye exams and glasses, along with free transportation. And breakfast.

Most of the children who visit the clinics have coverage through Medi-Cal, California’s Medicaid program for low-income people. There is no out-of-pocket cost for the eye exams and glasses for them, or for children who are uninsured, said Alexander Zahn, chief business development officer for the Advanced Center for Eyecare.

Almost half of the students examined need glasses.

“The need was very apparent” in the Central Valley, Zahn said. “Sixty dollars for an eye exam and $80 for glasses might be the difference between eating dinner a couple days a week.”

Daisy was among 12 students who were bused to the Delano Union School District Vision Center, adjacent to Pioneer School, an elementary school with about 1,000 students. Almost all the students at Pioneer are Hispanic and about three-quarters qualify for free or reduced-price lunches.

Students from throughout the Delano Union School District visit the clinic. Since it opened in 2018, the clinic has performed 961 eye exams and prescribed 517 pairs of glasses.

For Daisy, whose parents are farmworkers, the clinic has been a tremendous help.

“They prune out in the fields,” said Guadalupe Leon, Daisy’s grandmother. “They can’t afford to take days off.” 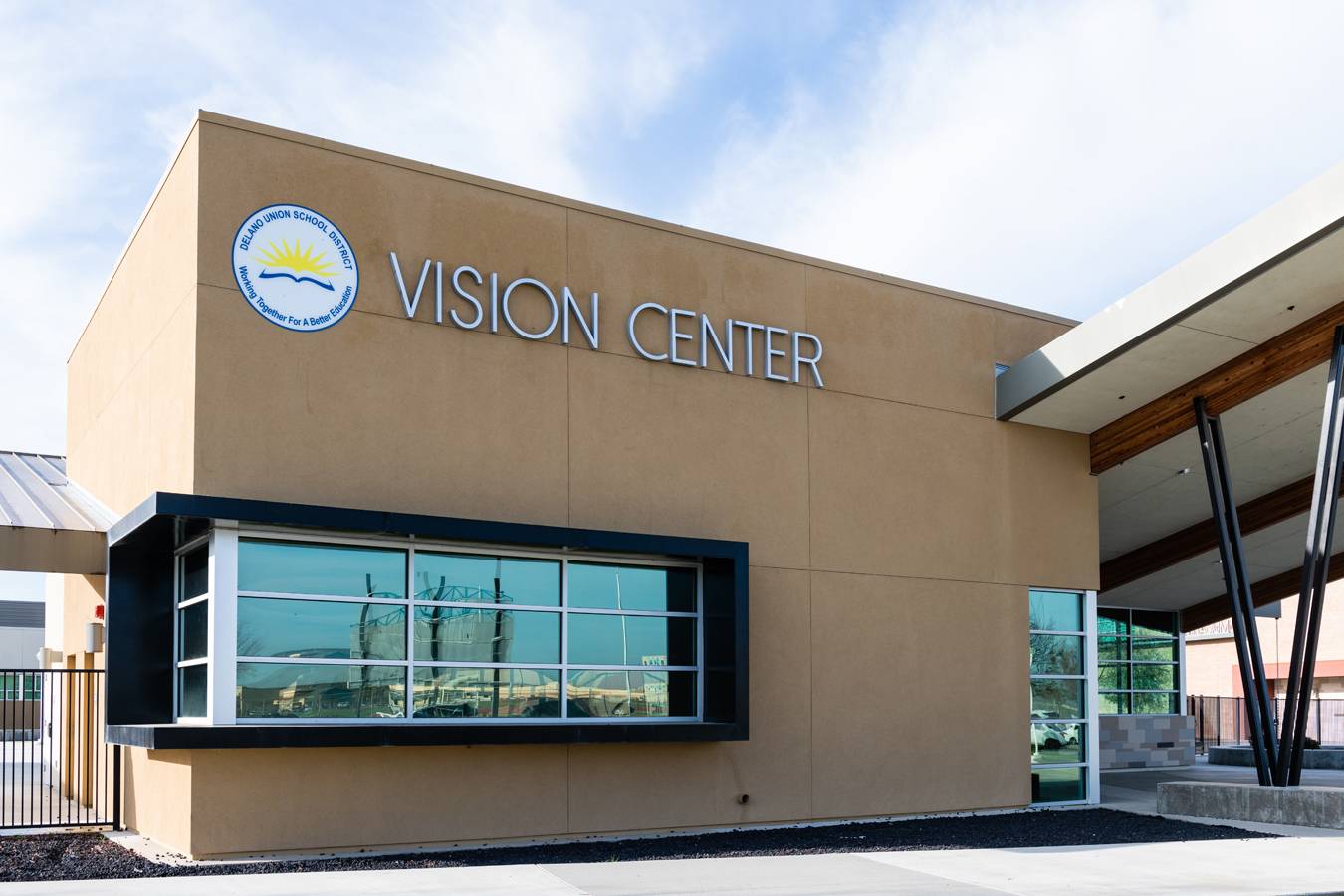 The Delano Union School District Vision Center is funded by multiple sources: OneSight, a nonprofit organization dedicated to increasing access to vision care in underserved communities around the world, donated the ophthalmic equipment and provided grant funding for the first year of operation. The Advanced Center for Eyecare provides staff and supplies. And the school district provides the facility, furnishings and transportation.(Heidi de Marco/California Healthline) 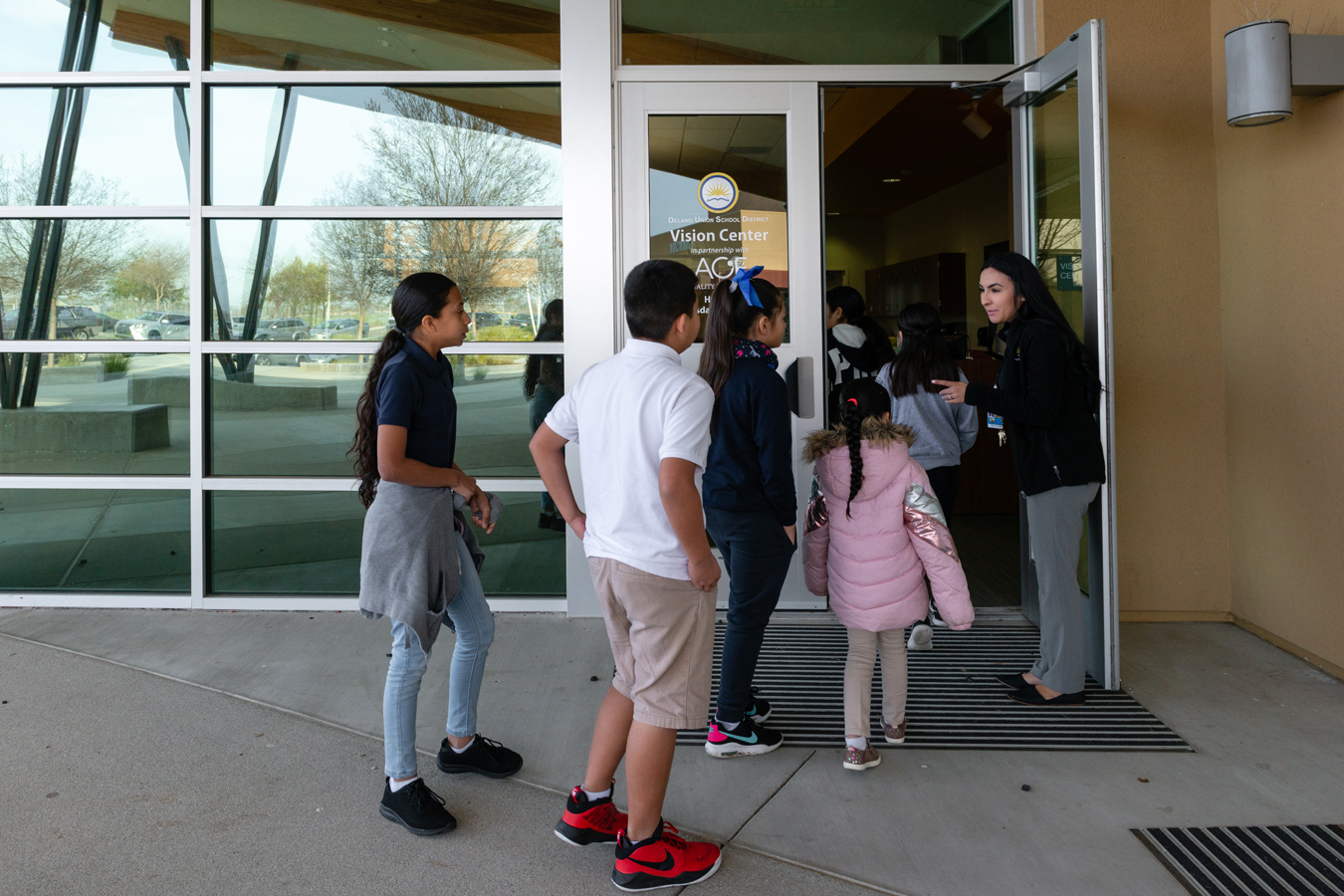 Twelve students from Nueva Vista Language Academy and Fremont Elementary School arrive by bus for their eye exams and follow-ups. Linda Hinojosa, a registered nurse for 20 years, says lack of transportation is a major barrier to vision care. “Parents a lot of times don’t have a car, or it can be a one-vehicle family,” she says.(Heidi de Marco/California Healthline) 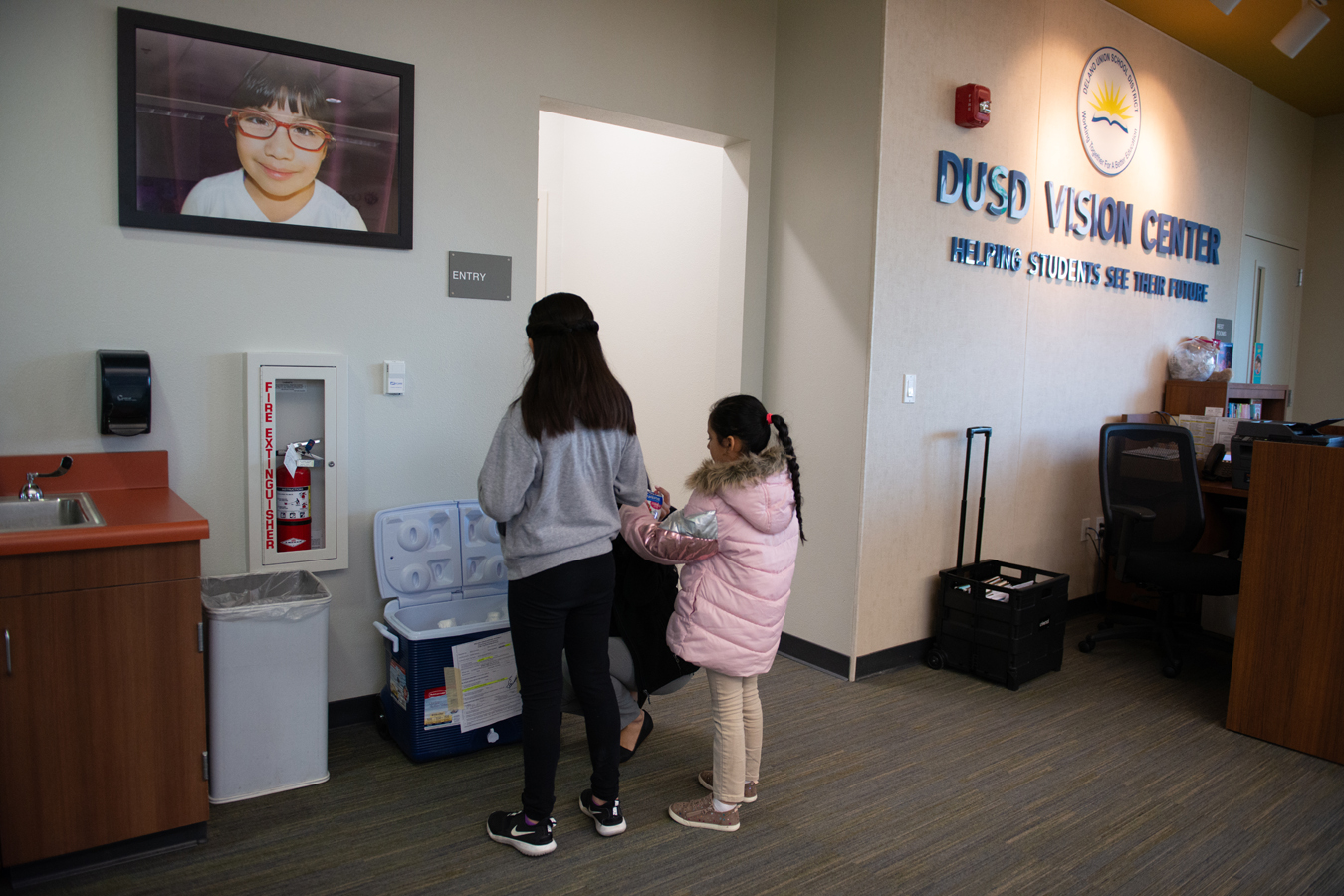 Students are offered breakfast before their appointments with optometrist Jolly Mamauag-Camat. About three-quarters of students in the district are eligible for free/reduced-price meals.(Heidi de Marco/California Healthline) 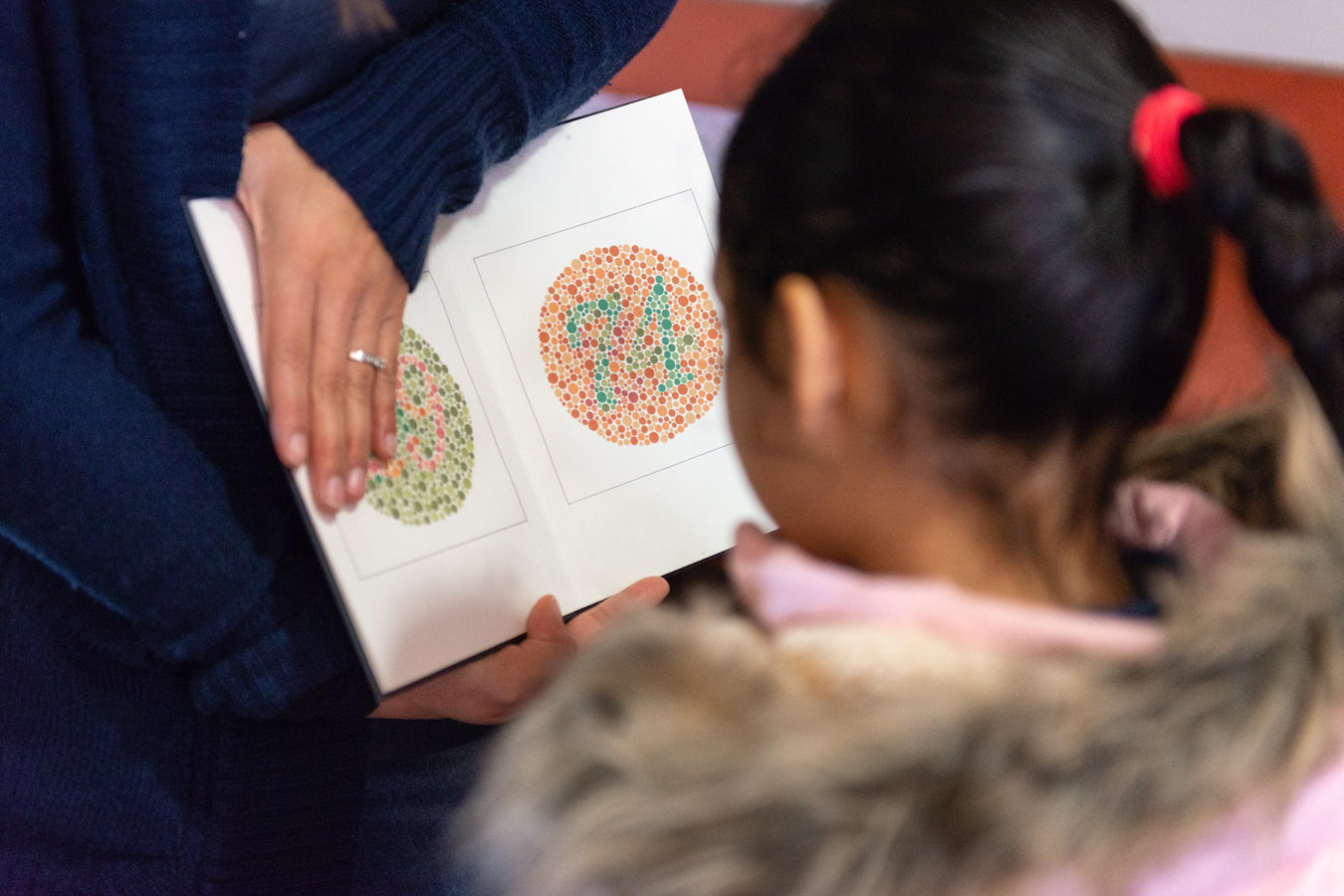 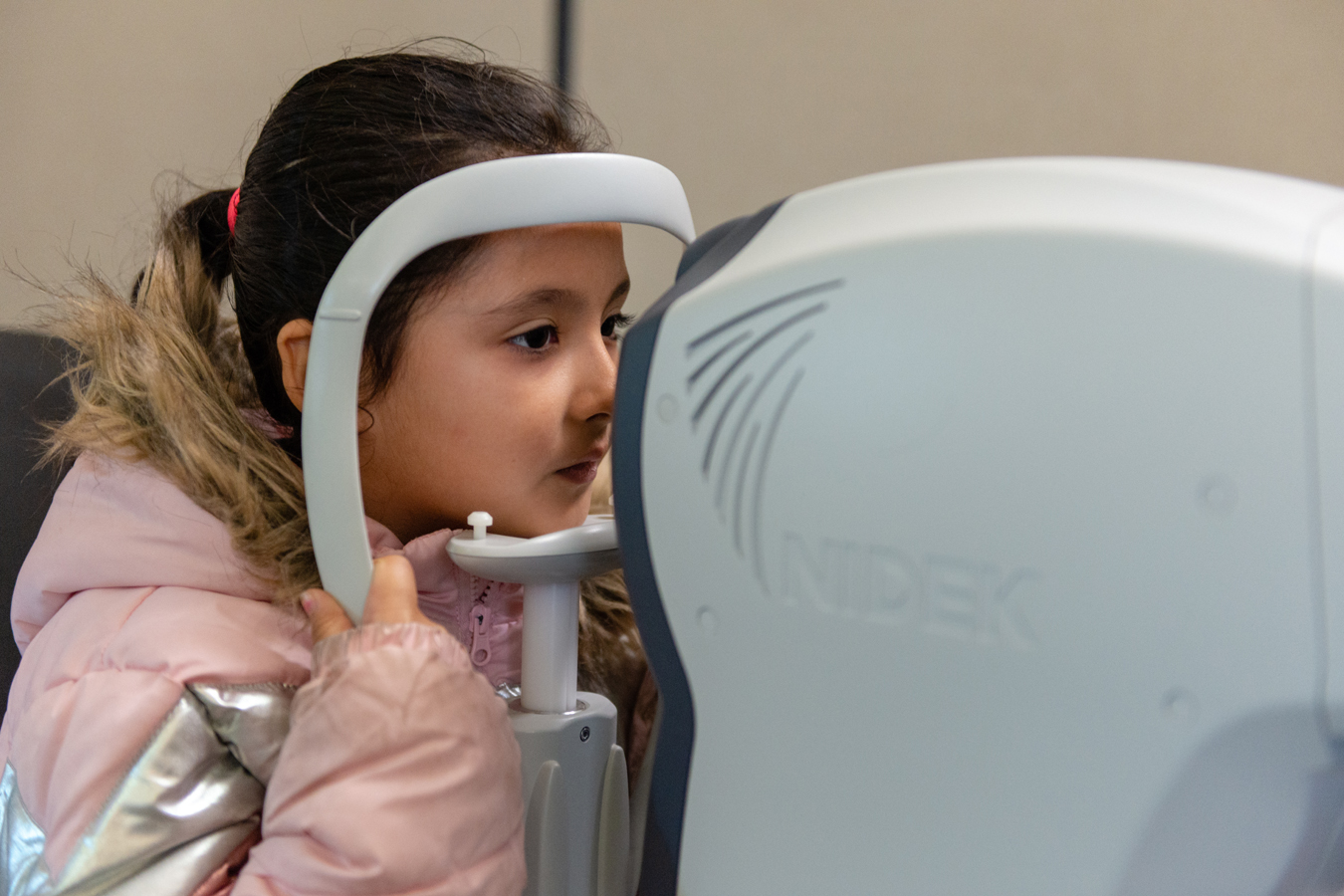 Daisy looks into an auto refractor as part of her eye exam.(Heidi de Marco/California Healthline) 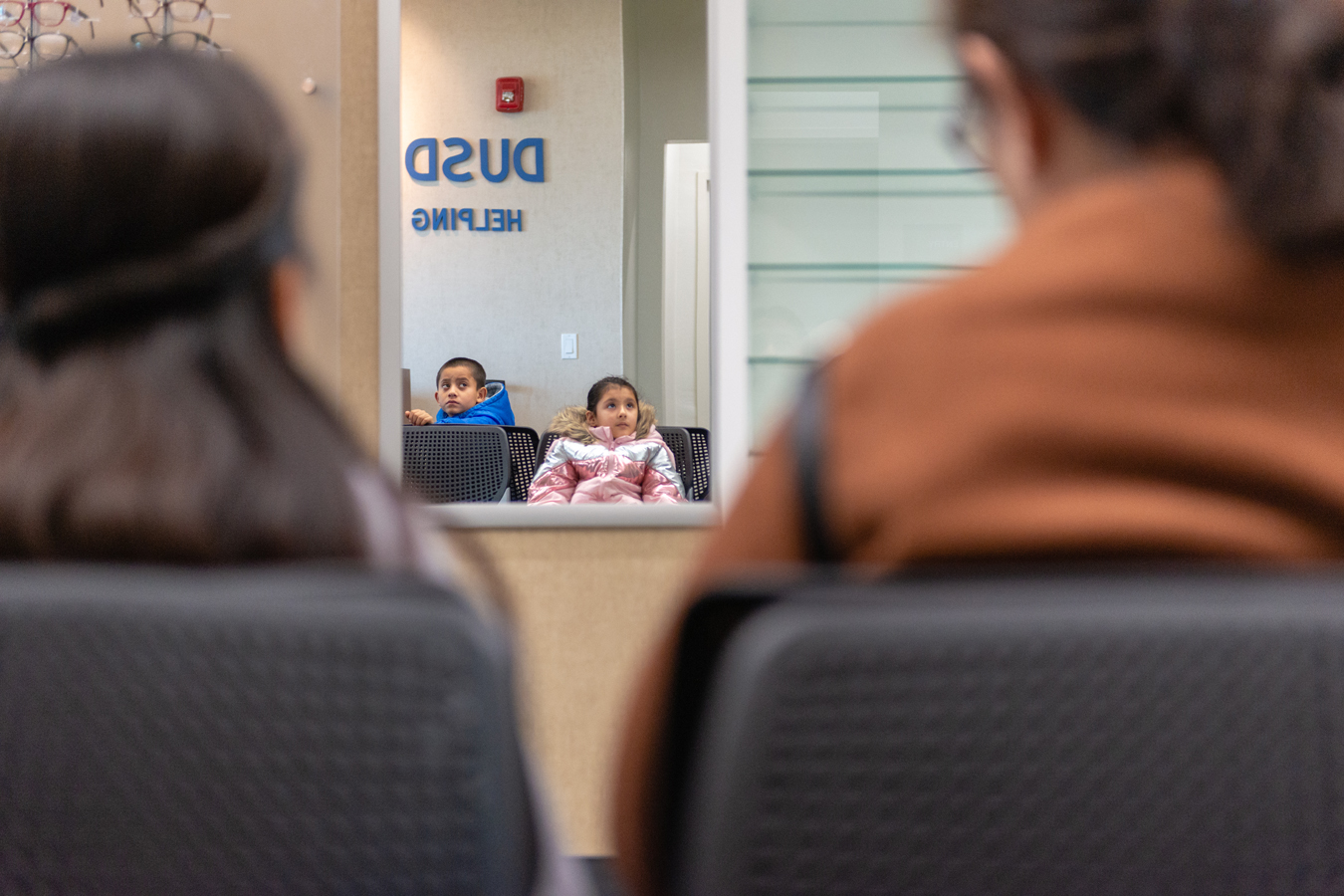 Daisy and Jonathon Castro watch a movie as they wait for their eyes to dilate. This is the first eye exam for both of them.(Heidi de Marco/California Healthline) 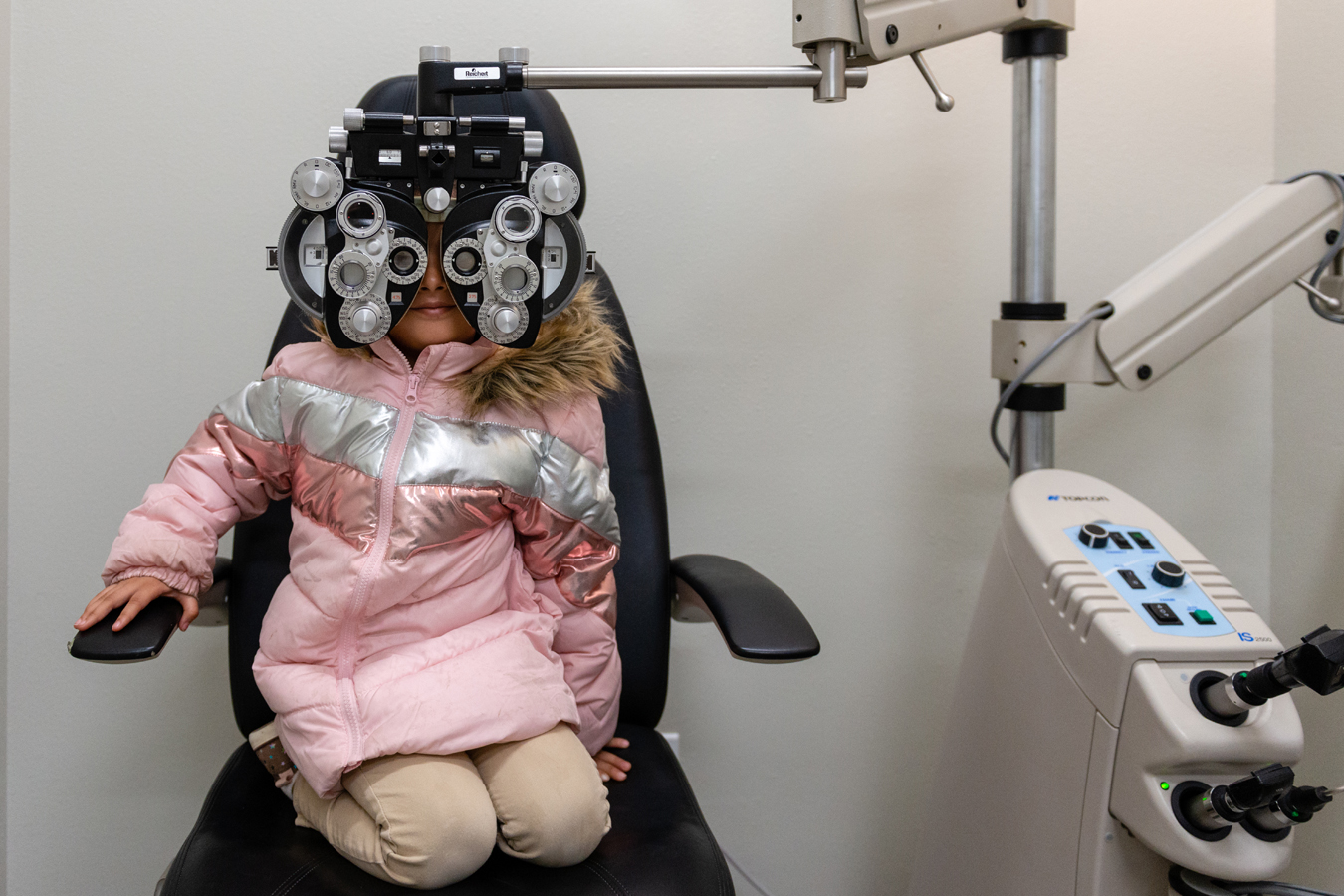 Daisy sits on her knees to see through a phoropter, a device to help determine eyeglass prescriptions. Mamauag-Camat says children often can’t tell if they have vision problems because they don’t know any differently. “They can fall through the cracks,” she says. “They don’t know the difference between what’s clear and not clear.”(Heidi de Marco/California Healthline) 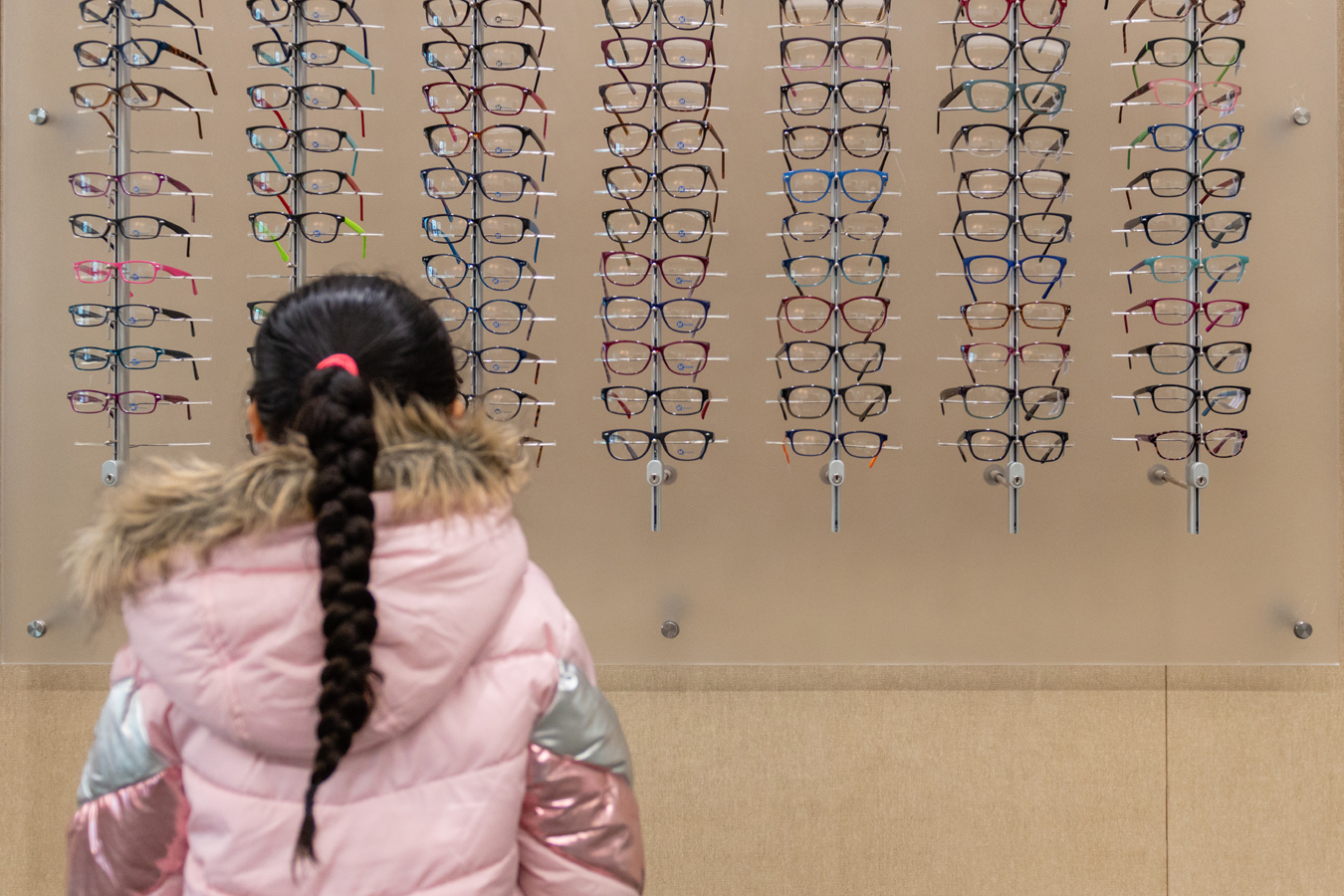 About 45% of Kern County’s population is on Medi-Cal. Medi-Cal covers vision care, including an eye exam and glasses every two years, but in communities like Delano, access is a problem. “We live in an area with a big shortage of providers, particularly specialty care providers like optometrists and ophthalmologists,” says Alexander Zahn, of the Advanced Center for Eyecare.(Heidi de Marco/California Healthline) 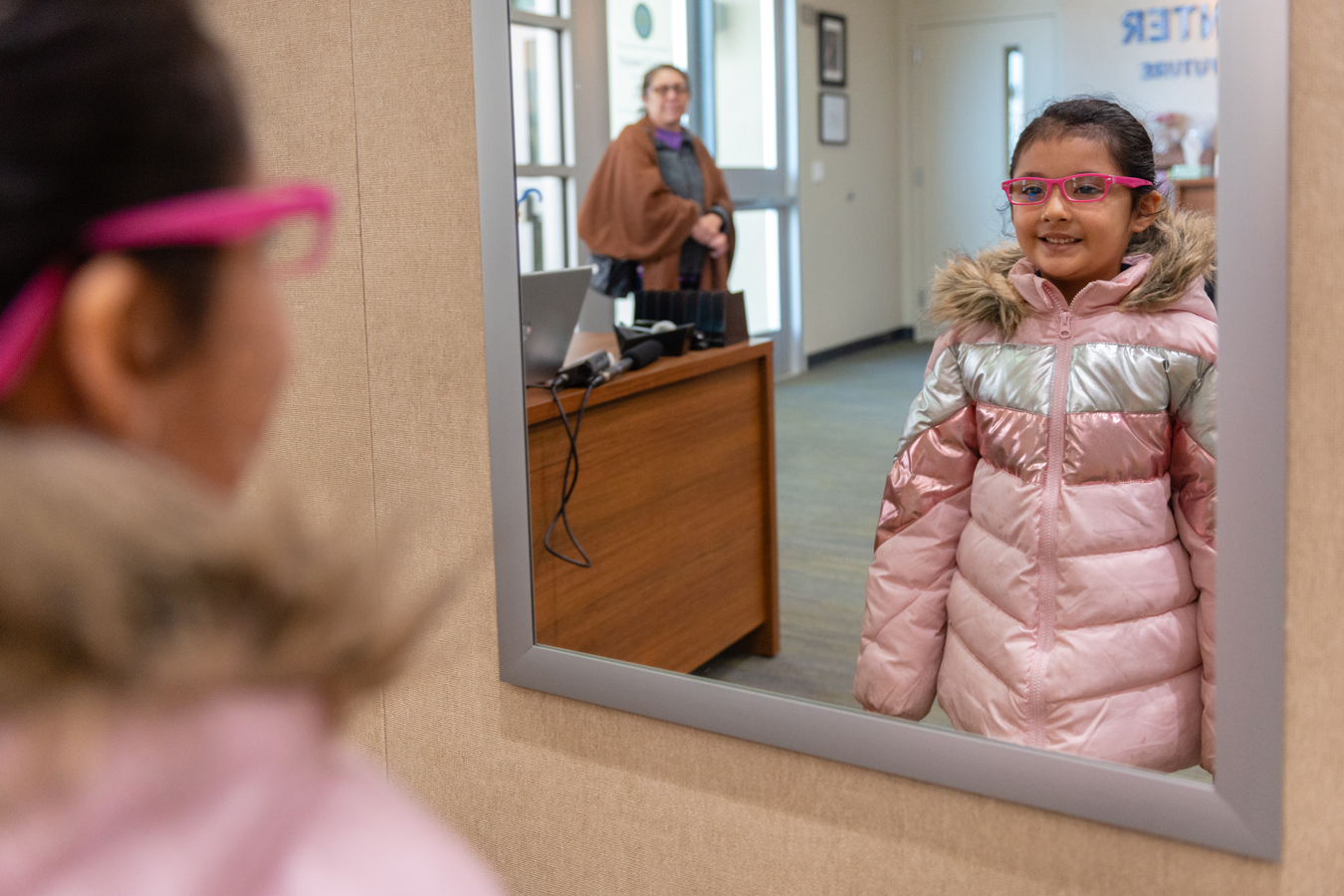 Daisy picks out glasses right after her exam, a pink pair that she had been admiring all morning. “We need to go where students are,” says Hinojosa. “Vision is absolutely vital.”(Heidi de Marco/California Healthline)

Your School Assignment For The Day: Spelling And Specs