He felt a little strange about winning, he said. Prior to the contest he had not thought much about raising awareness of mental illness. He’d joined the contest only because the teacher of his film class at Canyon High School in Anaheim had suggested it. Little did he know that it would soon figure prominently in his family life.

Walker’s video, “If We All Speak Loud Enough,” starts with teens silently mouthing their diagnoses into the camera, accompanied by subtitles: depression, bipolar disorder, post-traumatic stress disorder. By the end, they’ve all found their voices.

People with mental illness often feel they don’t have the power to speak up.

Walker, now a 20-year-old student at Chapman University in Orange County, describes the experience as “eye opening” and “life changing.” He credits the program that sponsored the film competition with giving him and his family the tools they needed to help his younger sister, who was diagnosed with depression and anxiety shortly after the contest.

Walker is one of 4,000 students in California who have participated in the Directing Change Program and Student Film Contest since it started four years ago. The goal, program officials say, is to reduce stigma and cultivate acceptance of mental illness among young people, ages 16 to 25. They say it’s working.

Eighty-seven percent of those who have participated in the program say it taught them how to recognize the warning signs of suicide and what to do if a friend is thinking about it, according to a recent program survey.

While the annual film contest is the largest component of Directing Change, the program also offers educational materials to schools and community youth programs to address mental health.

There are multiple film contest winners across three different categories. First prize winners get $500 or $1,000, depending on the category. Second- and third-place finishers get either $250 or $500.

The winning videos are shared with schools throughout the state to be shown in classrooms. They are also available on the Directing Change website and have been downloaded more than 40,000 times since the program’s inception, said Stan Collins, the program manager.

“The videos are getting out there; people are watching,” he said. 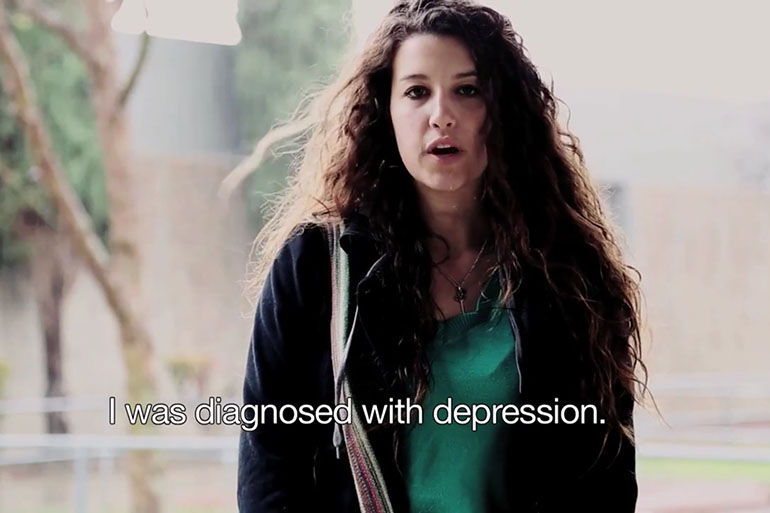 A scene from the predominantly silent film “If We All Speak Loud Enough” produced by Nick Walker at Canyon High School in Anaheim in 2014.

Eighty-eight percent of teachers who have brought the film contest to the attention of their students said it stimulated classroom discussion about mental health and suicide prevention.

“It is our hope that the experience of making these videos will inspire youth to become agents of change, standing up for young people who are experiencing tough times,” said Jana Sczersputowski, founder of Directing Change and director of its film contest.

Since it began, the contest has spawned 1,651 films, including submissions from 308 schools in 35 counties across California.

The Directing Change contest is part of Each Mind Matters: a statewide campaign to prevent suicide, reduce stigma and discrimination related to mental illness. Its efforts take various forms, such as documentaries and public service announcements, and are sponsored by the California Mental Health Services Authority (CalMHSA), a coalition of counties.

CalMHSA’s stigma-busting efforts are funded by the California Mental Health Services Act, also known as Proposition 63, which imposes a 1 percent tax on incomes of $1 million or more to fund county mental health programs.

Collins, the program manager, said he does not know of any other youth contest tackling mental health. Because of the funding source, the program is limited to California, but the goal of program organizers, he said, is to replicate it in other states. Wayne Clark, executive director of CalMHSA, said putting Prop. 63 money into prevention and education projects such as Directing Change is an important way to alter how society views people who suffer from mental illness.

Earlier this year, a watchdog agency known as the Little Hoover Commission released a report in which it criticized a lack of transparency and poor communication in many programs funded by the Mental Health Services Act. That makes it hard to show whether the money raised through the so-called “millionaire’s tax” — $13 billion and counting — is making a dent in the state’s mental health crisis, the report said.

But stigma-reducing campaigns such as Each Mind Matters are working, Clark said.

A recent study by the RAND Corporation, a policy think-tank in Santa Monica, showed that people in need of mental health treatment who have been exposed to anti-stigma messages are more likely to seek help. As a result, they become more productive and contribute more to society, the report said.

Nick Walker can attest to that from his own family experience.

“People with mental illness often feel they don’t have the power to speak up,” Walker said.

Luckily, his sister did, and she got the help she needed, he said. “Had it not been for the program, I don’t think she would have been diagnosed as early as she was.”