Her first reaction was panic, said Thach, speaking through a Vietnamese interpreter. Uninsured at the time, she had no idea how to come up with the money. Then she learned from the hospital staff that as a low-income legal resident, she qualified for Medicaid, which ultimately paid the bill.

At a recent community meeting in this city, the 54-year-old Alameda resident teared up as she expressed her fear of losing Medicaid (known as Medi-Cal in California) under the Republican-sponsored American Health Care Act. The Congressional Budget Office estimates could lead to the loss of health coverage for 23 million Americans.

“I’m scared that Mr. Trump will cut Medi-Cal. How will I take care of my health?” Thach said.

More than 400 people attended the Oakland forum on Wednesday sponsored by the Oakland-based clinic system Asian Health Services. Some came to ask questions, others to share stories they hoped would motivate elected officials to help them. The room was so packed, a group of Chinese attendees had to observe from an overflow room. Most participants were middle-aged or senior citizens, many with notebooks and pens in hand.

With the help of headphones and a tableful of interpreters, the meeting was translated in 10 different Asian languages, including Cantonese, Mandarin, Mongolian and Korean and Tagalog. Questions were fielded by Asian Health Services staff, local politicians and an immigration attorney, who gave advice on interacting with Immigration and Customs Enforcement (ICE) officials. 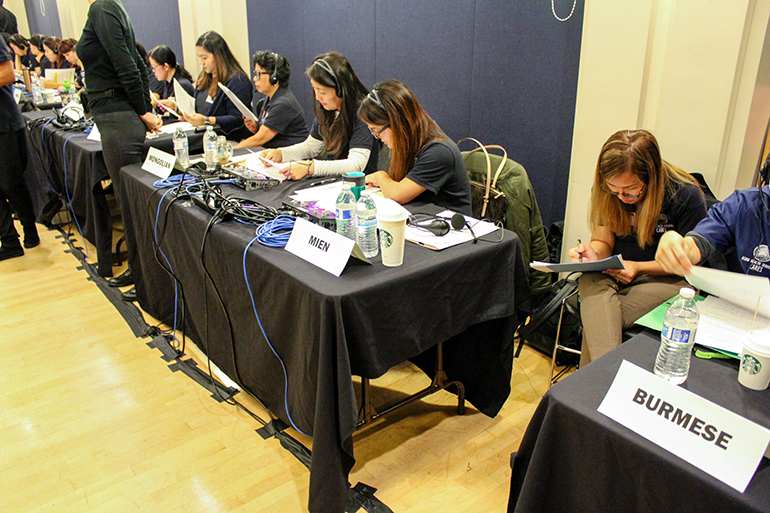 Some attendees feared the use of government programs like Medi-Cal and CalFresh (food stamps) could prompt ICE inquiries or deportation. The attorney, Nancy Wong with Asian Pacific Islander Legal Outreach, said she’d seen no evidence of that and urged the audience to continue using those programs for now.

Republican Congress members from California contend the Affordable Care Act — also known as Obamacare — is failing and has raised costs to the point that care has become out-of-reach for many Americans.

Devin Nunes (R-Tulare) who supports the GOP replacement bill, favors moving people from the “broken” Medi-Cal program “into better, private coverage plans.” The GOP’s AHCA would reduce federal funding for Medicaid by $834 billion from 2017 to 2026, the Congressional Budget Office estimated.

Many Americans are concerned about major changes to their health coverage, organizers said, but members of Oakland’s Asian immigrant community face additional language, cultural, legal and other barriers to getting the health care they need.

Some at the forum feared that a preexisting condition, or being an immigrant — even a legal one — would disqualify them from future health coverage and other public benefits. In most cases, adults without authorization to live in the U.S. cannot qualify for full Medi-Cal coverage, although permanent residents with green cards can. Children in California whose families meet income limits can receive Medi-Cal regardless of their immigration status.

“Many of you went from worrying … that insurers would not cover you to overnight being entitled to full benefits,” Sherry Hirota, CEO of Asian Health Services, told the audience. “We can’t roll back, and we can’t let immigrants be criminalized for using health services. That’s why we’re here.”

Hirota said the ACA, including the expansion of Medicaid, allowed her clinic system to treat more than 9,000 new patients. More than 90 percent of the center’s patients are on Medi-Cal, she said. 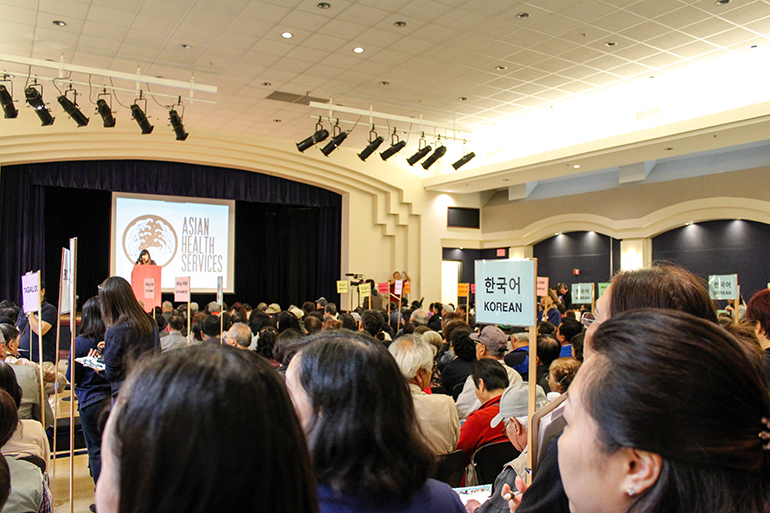 “More [forums like these] are emerging, and they’re important because there are many questions and not enough information out there,” said Doreena Wong, a project director with Asian Americans Advancing Justice-Los Angeles.

The organization has helped put together similar informational events about health care and immigration in Spanish and Asian languages in Los Angeles and Orange counties.

Cary Sanders, director of policy analysis for the California Pan-Ethnic Health Network, an advocacy group, said the difficulty is that immigrants historically have been excluded from certain government health programs.

“California has certainly gone much further than other states to expand health care for immigrant communities,” Sanders said. “For certain groups, it’s still very difficult. They may only be eligible for emergency care. Because of that people often delay care. They have to use home remedies to limp along to take care of and manage health problems that, if left untreated, can become a lot more serious.”

At the forum, Alameda County Supervisor Wilma Chan pointed out that Asians make up close to 30 percent of the population in her county. Together with Latinos, they comprise more than half. 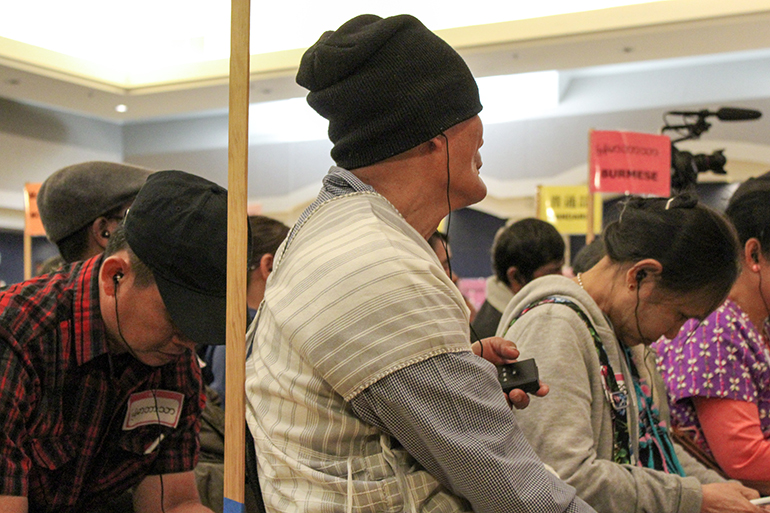 A Karen-speaking man listens to a translation of a speech. (Kellen Browning/California Healthline)

She asked that people not be afraid to access health care services or make use of any other public benefit.

“There is this idea that if you’re not a citizen, you can be deported if you go to a clinic or use food stamps … this has not happened,” Chan said.

One woman said her friends have encouraged her to stop using CalFresh to draw less attention to her family. A man asked whether paying cash at the clinic instead of using his Medi-Cal coverage would be safer for his mixed-status family.

Mandy Xue of Alameda was grateful for the meeting even though her concern had little to do with the goings-on in Washington. She learned two weeks ago at her son’s dentist’s office that his Medi-Cal coverage had ended. When she called the state for an explanation, she was told there was no record of her or her 13-year-old son, even though the Alameda resident says they have been covered since she was pregnant with him.

Xue, 45, was not sure what to do, and worried that she and her son would not be able to continue seeing their doctors.

The event was “very helpful,” Xue said through a Cantonese translator, because now “I know what the next step should [be] and what should I look for.”

A Community Seeks Answers, Assurances About Health Care — In 10 Languages