A Texas consulting company that arranges spine surgery and other medical care for people injured in car crashes has come under scrutiny in a widening federal bribery investigation. 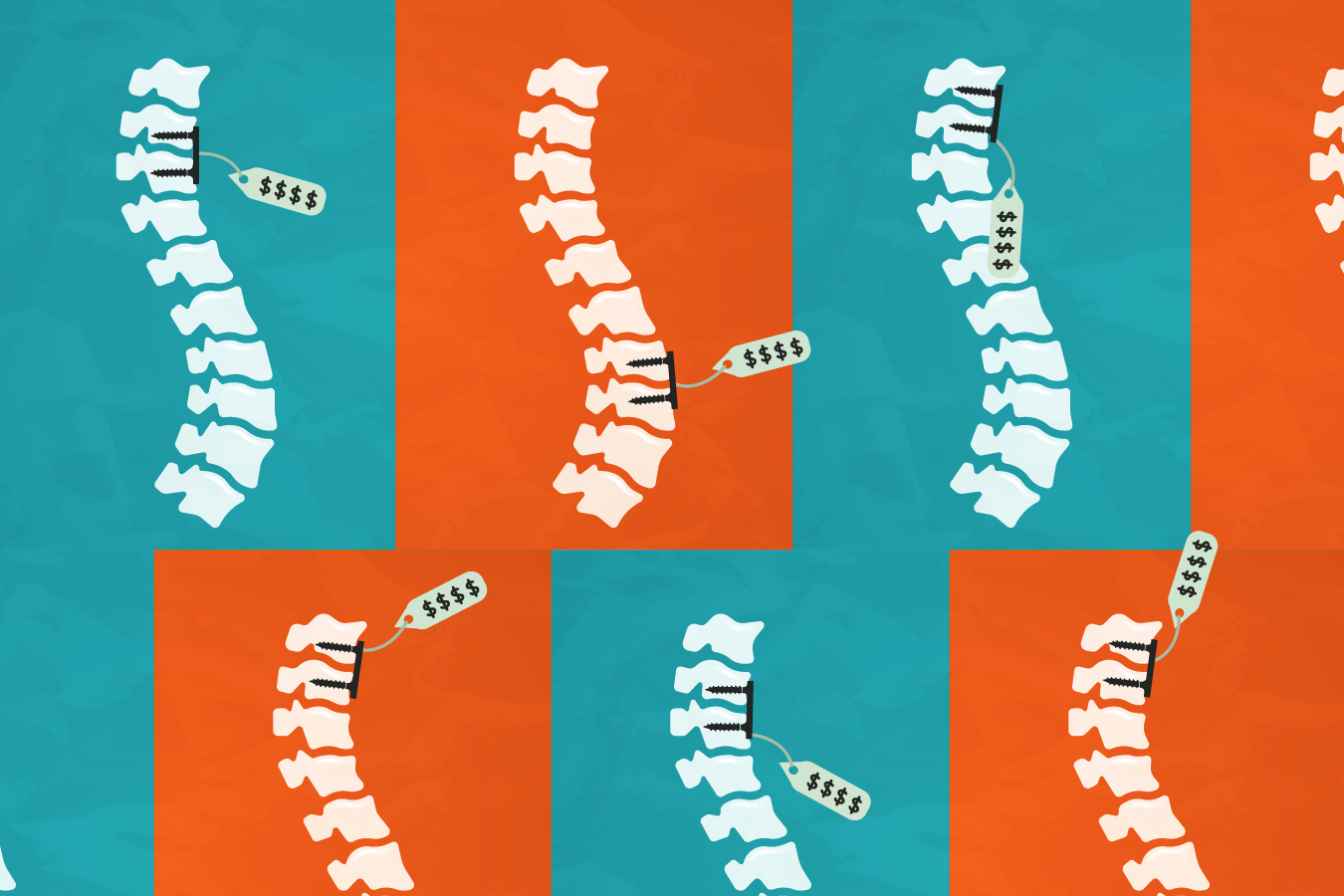 How orthopedic surgeons have raked in billions through ties to medical device companies via consulting deals, royalties or ownership stakes, while patients’ injuries mount.

Meg Health Care, run by Dallas personal injury attorney Manuel Green and his wife, Melissa Green, is the focus of a search warrant recently unsealed by a Massachusetts federal court in an alleged health care fraud prosecution there. The probe is unusual because it uses a little-known law meant to crack down on organized crime racketeering across state lines.

Investigators alleged in the 2019 affidavit that the Texas company accepted thousands of dollars in bribes from SpineFrontier, a Massachusetts medical device company. SpineFrontier; its CEO, Dr. Kingsley Chin; and its chief financial officer, Aditya Humad, were indicted in September on charges of paying kickbacks to surgeons. All have pleaded not guilty.

No charges have been filed against the Greens or their company, and federal officials declined to discuss the investigation, which is detailed in the now-unsealed 2019 search warrant.

Meg Health Care sets up spine surgery and other medical treatment through “letters of protection,” or LOPs, legal contracts in which patients agree to pay medical bills using proceeds from a lawsuit or other claims against the party responsible for their injuries. These contracts are common in personal injury cases when people either lack health insurance or choose not to use it to pay for medical treatments after an accident. The downside is that patients can be left to foot the bill if their cases settle for less than they owe.

On its website, Meg Health Care says it “represents a group of doctors and hospitals who were tired of seeing injured people without access to medical care they needed after an accident. We hold firm to the belief that under the law, and as a matter of basic decency, the person or business that caused the injury should be held responsible.”

According to investigators, Manuel Green steered injured patients with LOPs to a local neurosurgeon who used SpineFrontier implants in surgeries at two Dallas-area hospitals.

Chin and SpineFrontier were the subjects of a KHN investigation published in June that found that manufacturers of hardware for spinal implants, artificial knees, and hip joints had paid more than $3.1 billion to orthopedic and neurological surgeons from August 2013 through 2019.

Government officials have argued for years that payments from device makers to surgeons and other medical providers can corrupt medical decisions, endanger patients, and inflate health care costs. The SpineFrontier indictment alleges that the company paid millions of dollars in bogus consulting fees to spine surgeons in exchange for their using its products, often in surgeries paid for by Medicare or other government-funded health insurance plans.

The Texas investigation adds a new dimension to the case by focusing on medical care that is paid for privately, which is not covered under federal anti-kickback statutes. Instead, the search warrant alleges violations of a law called the Travel Act. Enacted by Congress in the early 1960s to combat the mob, the Travel Act makes it a federal offense to commit crimes like bribery, prostitution, and extortion across state lines, including through the mail or by phone or email. Convictions can bring up to five years in prison, more if violence is involved.

Jonathan Halpern, a New York white-collar criminal defense attorney, said that such a use of the Travel Act reflects “an aggressive expansion” of the U.S. government’s power to prosecute health care fraud.

One of the first health care fraud prosecutions under the Travel Act took place in Texas and led to convictions on bribery and kickback charges of 14 people, including six doctors, associated with Forest Park Medical Center in Dallas. They drew a combined sentence of 74 years and were ordered to pay $82.9 million in restitution.

Chris Davis, a Dallas lawyer who specializes in government investigations, said the Travel Act grants federal prosecutors jurisdiction in cases “where you don’t have state or federal money involved.”

The Meg Health Care search warrant cites payments of more than $93,000 in 10 checks allegedly sent by SpineFrontier to the Texas company between April 2017 and October 2018. Investigators allege that the money was paid as a bribe for referring patients for surgeries using SpineFrontier products.

Investigators also cited a February 2016 email in which Melissa Green told the device company that a patient’s legal case had been settled and asked: “Please let me know when MEG can expect to receive payment per our agreement. Thank you!”

About two months later, the device maker cut the company a check for $3,953.60, according to the search warrant.

Nine of the 10 checks were signed either by Chin, a Fort Lauderdale spine surgeon and SpineFrontier’s founder, or Humad, according to the search warrant affidavit. Chin and Humad are the two executives indicted in September. Their lawyers had no comment.

Federal investigators sought the search warrant for Melissa Green’s email account at Meg Health Care in August 2019, arguing that they had “probable cause” to investigate the company for Travel Act violations, court records show. A federal judge in Massachusetts unsealed the warrant and related documents late last year.

Meg Health Care invites lawyers whose clients have a “significant medical need” to apply to the company, according to its website. If approved, Meg Health Care schedules an appointment with one of its doctors. “From there, our doctors will handle every aspect of the treatment sought, including surgery (if necessary),” the website says.

In a 2019 court filing in Dallas County, unrelated to the search warrant issued in the Massachusetts case, Manuel Green said he was the “founder and owner” of the company. He said it “assists physicians and medical facilities with reducing their exposure to risk when providing treatments to patients under [a] letter of protection.”

He went on to say the company’s “business model and the consulting services it provides are unique within the healthcare industry in the state of Texas.” The company’s website lists medical providers in 11 Texas cities.

According to investigators in the Massachusetts case, Green referred patients with LOPs to Dr. Jacob Rosenstein, an Arlington, Texas, neurosurgeon who used implants that SpineFrontier sold to two hospitals, Pine Creek Medical Center in Dallas and Saint Camillus Medical Center in Hurst, Texas. Pine Creek has since declared bankruptcy.

Neither Rosenstein nor representatives of the hospitals could be reached for comment.

Although proponents say that LOPs may be the only option for uninsured or underinsured crash victims to get medical care, a recent KHN investigation found that doctors and hospitals that accept them often charge much higher rates than Medicare or private insurance would pay for similar care and that the process can saddle patients with medical debt or expose them to safety risks.

Disputes over the size of medical bills and even whether the care was necessary are common in personal injury lawsuits in Texas. In one 2016 Dallas County case, for instance, a spine surgeon billed more than $100,000 for his services, while the hospital charged more than $435,000. By contrast, an expert hired by the defense set a reasonable fee at less than $4,000 for the surgeon and about $25,000 for the hospital, court records show. The case has since been settled.

Christine Dickison, a Texas nurse and medical coding consultant, said she routinely sees “hugely inflated” bills in car-crash lawsuits — and in some cases doubts whether the care was necessary.

“I see people who are undergoing surgery when there are literally no objective findings that support it,” Dickison said. “That is very disturbing to me.”