Hospitals have gobbled up nearly 40 percent of physician practices in California, leading to higher bills for patients, a new study shows.

Just a quarter of practices were owned by hospitals eight years ago, according to the study published Tuesday in the journal Health Affairs. That type of rapid industry consolidation was associated with higher prices for primary care visits and treatment from specialists.

In areas with both high levels of consolidation among hospitals and between hospitals and physicians, researchers estimated there was a 12 percent increase in premiums on California’s health insurance exchange from fall 2013 through 2016, beyond the general rise in medical costs.

Acquisitions of physician practices by hospitals tend to be small and typically fly under the radar, said Richard Scheffler, the study’s lead author and professor of health economics and public policy at the University of California-Berkeley.

“But when you add them up, they are having an impact on outpatient prices and Affordable Care Act premiums,” he said. “I call it conglomerate care.”

He said the change in California hospital-physician ownership is more recent compared with the earlier consolidation within the hospital industry and among insurance companies, which also pushed up prices. 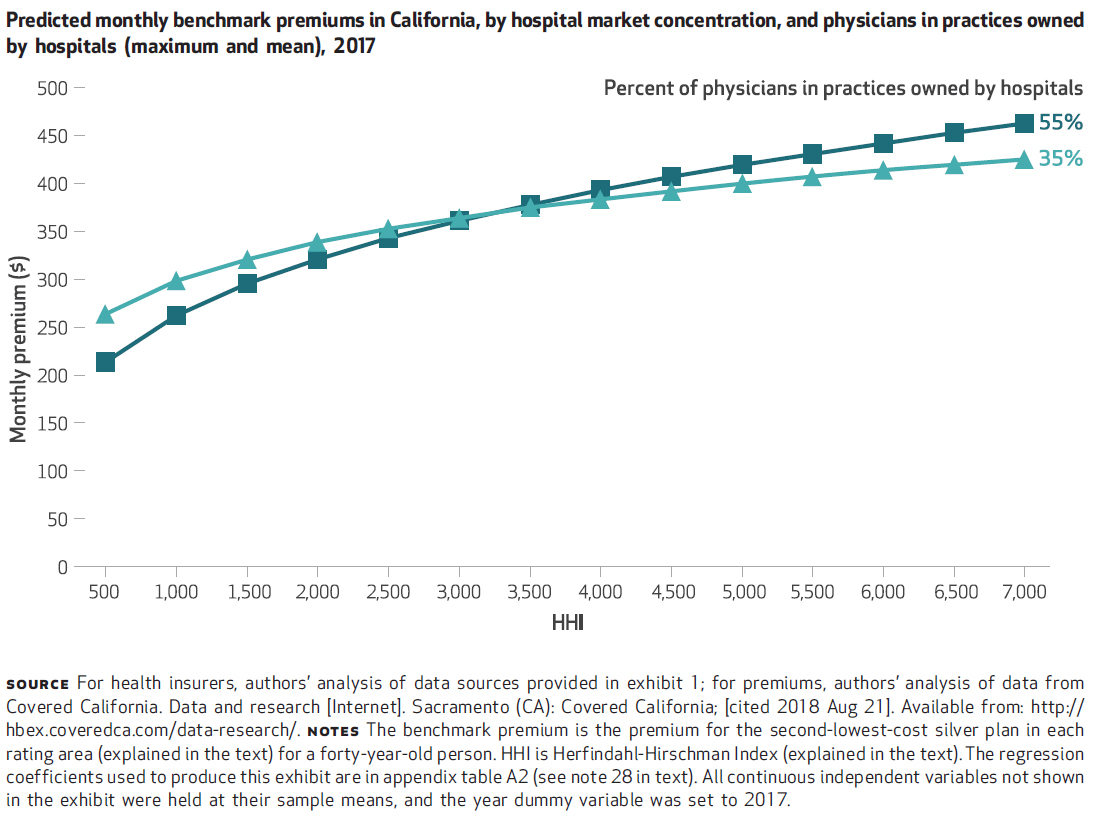 The percentage of California primary care physicians in practices owned by hospitals increased from 26 percent in 2010 to 38 percent in 2016, the study found. For the same period, the percentage of specialists in such practices jumped from 20 percent to 54 percent. For all physicians, the statewide figure grew from 24 percent to 39 percent, according to the study’s authors.

The steady decline of inpatient admissions has upended the normal business model for hospitals, and big systems are seeking more control over where patients get care outside their walls. The general trend toward buying doctors’ practices had been known, but the findings in the Health Affairs study make clear how big a change it is. Until recently, however, consolidation among insurers or hospital systems has attracted more attention from regulators and lawmakers.

A similar wave of hospital-physician consolidation has occurred nationally. From 2010 to 2016, the national share of office-based physicians who worked in hospital-owned organizations has increased from 30 percent to 48 percent, according to Scheffler and his co-authors.

Hospital and physician groups defend these mergers as good for patients, saying they help coordinate care that is often fragmented, duplicative and wasteful. The deals enable them to deliver care that’s less expensive and to negotiate more effectively with giant insurance companies, they say.

Carmela Coyle, chief executive of the California Hospital Association, said the study has serious flaws, drawing conclusions about supposed cost increases due to consolidation that aren’t supported by the data.

“These authors start from a place where consolidation and market concentration is bad,” Coyle said. “Our experience in health care suggests that bringing providers together can be a very good thing for communities and the patients they serve. It often preserves access and allows physicians to stay in the community.”

But critics of consolidation say that as large health systems gain market power, they can dictate where patients go for expensive tests and procedures. Some hospitals tack on “facility fees” for outpatient care, which boosts costs even further.

“These mega-enterprises are buying up everything and when you sit down to contract with them it’s ridiculously expensive,” said Glenn Melnick, a health care economist at the University of Southern California.

For instance, Northern California, where a few large health systems dominate the market and own many physician practices, has become the most expensive place in the country to have a baby.

Melnick co-authored a separate paper in Health Affairs, also out Tuesday, that described how a steady erosion of competition among hospitals in California has contributed to rising health care costs.

The prices paid by health plans to California hospitals declined by 26 percent from 1995 to 1999, a period when managed care was aggressive at negotiating lower prices. But a consumer backlash against tight controls on care and patient choice ensued, and that trend began to reverse in the early 2000s.

Prices increased by 238 percent from 2001 to 2016 — despite a 10 percent drop in the volume of care for commercially insured patients over that same period.

“Competition was working before, and now that competition has eroded,” Melnick said.

Some health care economists say hospitals and physician groups don’t need to merge in order to collaborate on patient care and that contracting could suffice without diminishing competition through outright acquisitions.

In March, California Attorney General Xavier Becerra sued Sutter Health, accusing the health system of overcharging patients for years and illegally driving out competition in Northern California. Part of that case centers on Sutter’s big medical groups, which are a key source for patient referrals and admissions into Sutter facilities. Overall, the nonprofit chain has 24 hospitals, 36 surgery centers and more than 5,500 physicians in its network.

Sutter denies any anticompetitive behavior and touts the benefits of offering patients a broad array of services. “Our integrated network of high-quality doctors and care centers aims to provide better, more efficient care — and has proven to help lower costs,” Sutter said in a recent statement.

Meantime, California lawmakers have tried to ban certain contracting practices used by large health systems, such as “all or nothing” provisions that force health plans to accept all of their facilities and medical groups systemwide. However, for the second consecutive year, SB 538 failed to advance amid opposition from the hospital industry.

Of course, the doctor’s office — whether it’s owned by a hospital or not — isn’t the only option for many consumers nowadays. Many people visit clinics run by retailers, such as CVS, or talk to a doctor through an app on their smartphone.

Scheffler said his study didn’t examine whether the quality of care had improved under hospital-controlled physician practices. He said, however, that the evidence of any quality improvement is thin so far, and he challenged providers to make their case.

“We want them to integrate care,” Scheffler said. “But if it’s giving them market power and increasing prices, is it worth it?”