California’s expansion of Medicaid under the Affordable Care Act enabled many low-income HIV patients to get health insurance previously denied to them. Still, those with mental health needs, who had been receiving coordinated care through a separate federal program, suddenly faced gaps in treatment, payment disputes and doctors who had little understanding of life with HIV.

A report on HIV patients is one example in a special California edition of the journal Health Affairs showing that though the state is often a national beacon in health care, some of its innovations fall short of expectations.

The Golden State was a pioneer in embracing the ACA, aiming to enhance the availability, quality and efficiency of health care. But its size and diversity — as well as the unforeseen complications of real-world implementation — have made for some messy experiments.

It is “not a well-controlled laboratory,” said Dylan Roby, an associate professor at the University of Maryland’s School of Public Health. “When you are trying to make things more efficient, there are, of course, going to be these gaps that are created.”

In the case of HIV patients, “individuals who had previously been receiving really integrated, culturally tailored services … were now having to navigate a really complicated landscape,” said Emily Arnold, associate professor at University of California-San Francisco and lead author of the HIV study.

Another Health Affairs article tracked the impact of California’s Medicaid expansion on family planning services for low-income residents. Researchers found that while it left far fewer young women uninsured, it did not boost the proportion who actually received family planning or general health care services. 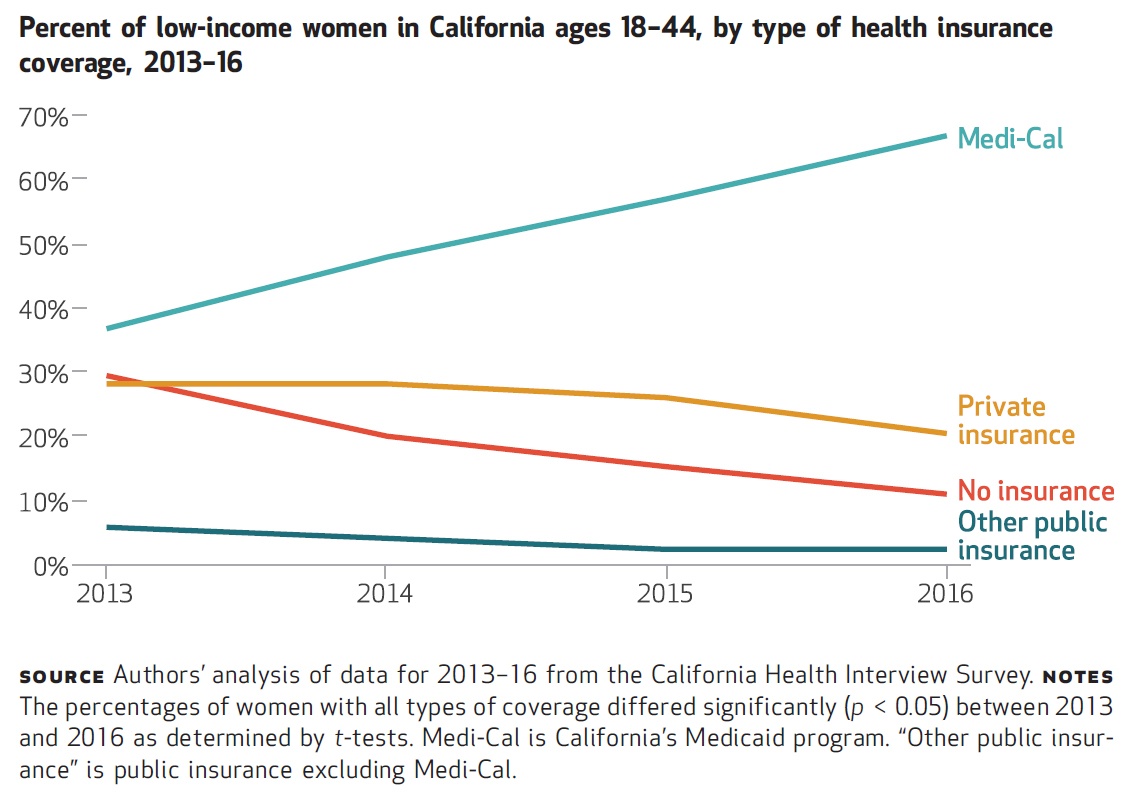 “It was a little bit disappointing,” said Heike Thiel de Bocanegra, associate professor at UCSF and one of the study’s co-authors. “We pushed for access and enrollment and to get everybody on health insurance. Now we have to make sure that they use it and that they use it for preventive services.”

That outcome may be due in part to the fact that California had already invested in family planning services, including for low-income women, according to the study.

California’s increasingly diverse population, willingness to tackle complex health care issues and long history with integrated health care mean it “has learned a lot for itself and also has lessons for the rest of the country,” Alan Weil, Health Affairs’ editor-in-chief, said in an interview.

Now, Weil said, people are watching California’s discussion of a single-payer health system, which the leading candidate for governor, Democrat Gavin Newsom, has made part of his platform.

The Health Affairs issue also highlights some California successes, including on maternal mortality. The death rate was rising alarmingly and “cut everyone to the core,” leading clinicians and state officials to establish quality measures and follow up on them, said Dr. Elliot Main, medical director of the California Maternal Quality Care Collaborative at Stanford University.

“The status quo was no longer sustainable,” said Main, the lead author of an article about a project to address the rising death rates.

Beginning in 2006, the public health department joined with doctors, hospitals and researchers to study the data, better understand the deaths and teach hospitals how to improve outcomes. While the U.S. maternal mortality rate got worse, California’s dropped nearly in half — from 13.1 maternal deaths per 100,000 live births, on average, for the years 2005 through 2009 to an average of seven per year from 2011 to 2013. 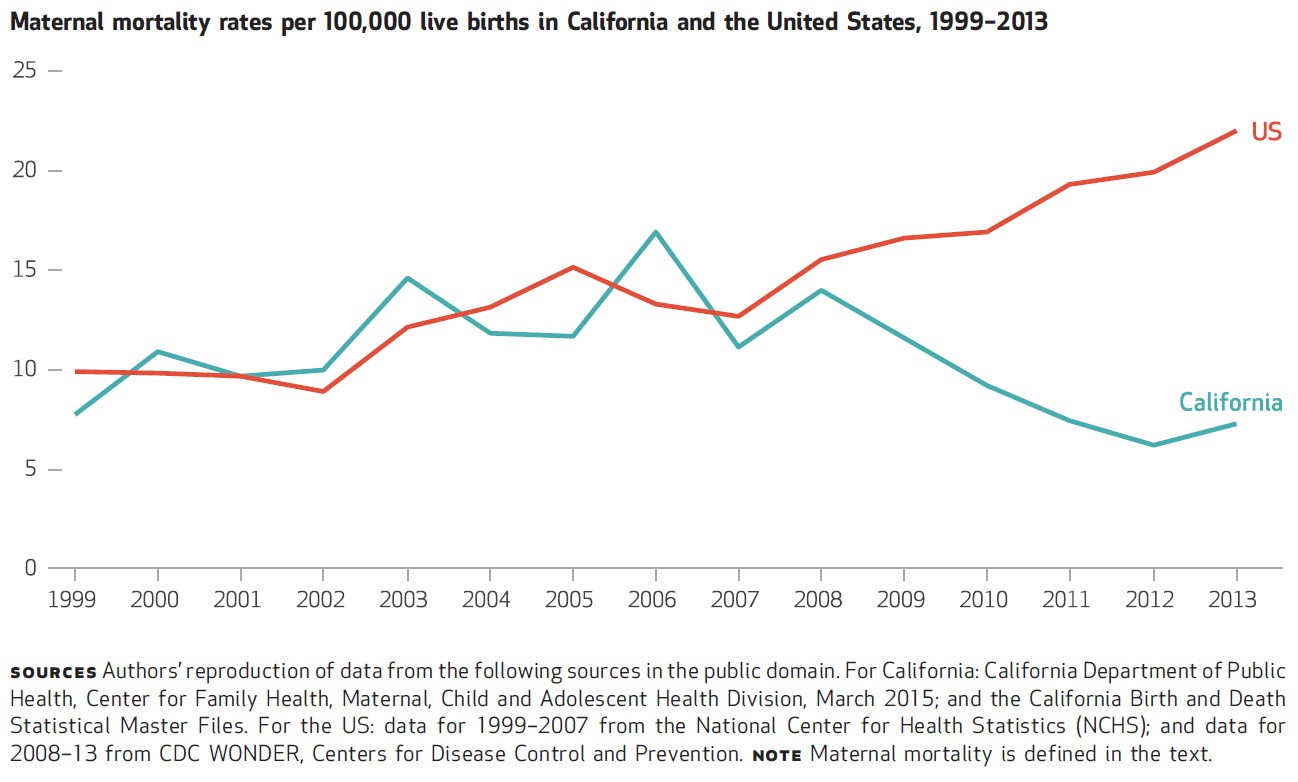 In San Diego County, hospitals and clinics tackled another killer: heart disease. Dr. Anthony DeMaria, a professor at University of California-San Diego, said the county’s biggest health care systems worked together on fighting heart disease, which continues to be the leading cause of death in California and the U.S.

They shared data and strategies, used health coaches to work with patients and collaborated with churches. Between 2007 and 2016, hospital admissions due to heart attacks dropped by 22 percent, compared with an 8 percent drop statewide.

“How many cities do you think would be able to get all the competing health care institutions to collaborate on something like this?” asked DeMaria, who co-authored a Health Affairs analysis on the effort. “In most places, it’s like porcupines mating. When they come together, they are very, very cautious.”

State health officials, the federal government and insurance plans have also worked together to improve care for chronically ill, low-income seniors who are on both Medicare and Medicaid. They are among the most expensive and complicated patients in the nation and historically have had poorly coordinated care.

California was one of 13 states to implement a pilot project intended to better integrate their medical care and other health-related services. Patients who enrolled in the pilot, known as Cal MediConnect, ultimately reported greater satisfaction with their benefits and quality of care.

At the same time, about half of the eligible participants opted out of enrollment — a significant shortcoming in the experiment.

Despite its successes, California still has significant health disparities and an uneven distribution of health care providers to help reduce them. A Health Affairs study about nurse practitioners underscores the challenge of getting these medical professionals to the populations that need them the most.

Joanne Spetz, a professor at UCSF, found that even though nurse practitioners could help fill gaps in primary care, they and the programs that train them are generally in locations that already have a relatively high number of doctors per patient.

San Francisco, for example, has multiple nurse practitioner education programs, said Spetz, lead author of the article. “That isn’t where the jobs are and where the greatest needs are,” she said.

For California’s complex health challenges, “there is no silver bullet,” said Shana Charles, assistant professor at Cal State-Fullerton. “There are still going to be issues even if you have the best of intentions.”