California officials don’t have the authority on their own to block the national insurance merger, but their decisions can be influential as the companies try to win antitrust approval from the U.S. Department of Justice.

Shelley Rouillard, director of the state Department of Managed Health Care, said she reached an agreement with Aetna that should help keep future rate increases to a minimum and improve the quality of patient care.

Aetna also agreed to spend nearly $50 million toward the expansion of a Fresno service center and for a variety of health-related initiatives in the state.

Industry analysts have grown more pessimistic about the Anthem-Cigna deal clearing regulatory scrutiny in Washington, D.C., due to antitrust concerns and internal management conflicts. But they remain more upbeat about the prospects for Aetna’s transaction.

Rouillard said she’s still reviewing the Anthem-Cigna merger but didn’t give any timing for her decision.

“There are elements that are similar across mergers, but each one also has unique characteristics,” she said Monday.

Aetna called Rouillard’s announcement the “latest positive step” for the Humana merger and said it expects the transaction to close in the second half of this year.

“We are committed to making strategic investments to address deficiencies in the health care delivery system, make health care more cost effective, and improve the health and wellbeing of Aetna members and their beneficiaries throughout the state,” said Aetna spokeswoman Anjie Coplin.

One of the biggest sticking points for California officials in considering the Aetna proposal was a string of rate hikes for small businesses in recent years.

The managed-care agency had deemed four of Aetna’s premium increases unreasonable since 2013, but the company went ahead with each one. California officials review premiums but have no authority to stop health insurance rate increases.

Last year, Rouillard accused Aetna of “price gouging” after it raised rates on small employers by 21 percent. Consumer advocates have said they fear problems over rate increases and affordability will get worse as insurers consolidate market power.

In an 18-page agreement with the managed-care department, Aetna said it “will commit to keeping HMO small group premium rate increases to a minimum.”

But the agreement doesn’t bar Aetna from going ahead with a rate hike deemed unreasonable by the agency. 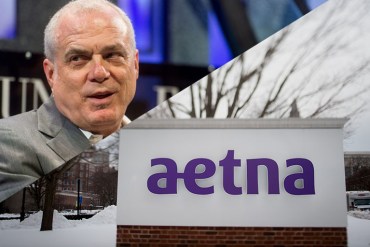 However, if the company were to move ahead on such a proposal, under the accommodation reached with Rouillard, Aetna would hold off on further rate increases for a short period. Aetna also would file proposed rates 90 days in advance of their effective date, up from 60 days under current rules.

Rouillard said those conditions offer an incentive for the company to negotiate further with her office.

“It forces them to come to the table and work something out that’s reasonable,” Rouillard said.

Ana Gupte, a health-care analyst at the investment bank Leerink Partners, said Rouillard’s decision is “another indication that the merger antitrust review is on track” for Aetna, particularly in light of more pushback against Anthem.

At a hearing in January with the managed-care agency, Aetna executives said that the company’s combination with Humana should yield $1.25 billion in savings by 2018 and even more in subsequent years.

But some consumer groups and health-policy experts have questioned whether much of those savings will be passed along to policyholders.

In her review, Rouillard also criticized Aetna for poor marks on patient care. In the agreement, Aetna pledged to improve its scores on care for hypertension, diabetes, stroke and prevention of heart attacks by the end of 2018.

Aetna also agreed to spend $49.5 million toward community investment, including: