Some Californians were shocked and deeply worried. Some were confused and cautious. Others were glad to hear California’s health insurance exchange might be dismantled. Here is a smattering of reactions from around the state to the election of Donald Trump, who has vowed to repeal the Affordable Care Act when he becomes president:

“I don’t think he would just completely pull the plug. Fortunately, we have people in Congress who don’t agree with him. He can’t just do whatever he feels like … I just can’t believe that this has happened. I don’t know what it all means.”

— William Gutgesell, 63, a retired San Diego gardener who signed up for Covered California after being uninsured for years

“It is totally frightening. If it’s repealed, we wouldn’t be able to afford his maintenance and his care. I could lose my husband. I don’t know what the future is going to hold.”

— Joan Igawa, 50, of South Pasadena, who worries her family’s insurer could exclude her husband from coverage, leaving no way to pay for liver cancer treatment

“I’m happy Trump got elected. I see my family struggle to make ends meet, and then on top of that they have to pay high premiums or penalties. It’s the most ridiculous thing I have ever heard. And it’s not like our care is getting any better.”

“I don’t think it is going to be changed overnight. That will take a while, just like Obamacare took a while to create … I don’t think we have to worry right now.”

— Hank Wang, 35, of Corona, a small businessman whose family of four is insured though Covered California

“I worry it will be gone, and I don’t know what I will do for insurance. Now I am going to have to look around again … It sure helped me out.”

“My wife cannot survive if she is not taking her daily insulin and her daily medications for blood pressure. It would be a death sentence for her … The only option we would have would be to use emergency services. If we are without coverage what else can we do?”

— Rachel Galindo, 54, of Bell Gardens, whose wife qualified for Medi-Cal under the Affordable Care Act. Galindo, a transgender woman, said Medi-Cal also pays for her hormone medications and doctors’ visits

“Now there is no certainty. I have lost that comfort.”

— Mike Murphy, 42, a Los Angeles resident who is HIV positive and has health coverage through his law firm but worries about losing it in the future

“We should not be forced to buy health insurance. The government should not be in the business of forcing us to buy anything. But there are some good things that came out of Obamacare … getting rid of the preexisting condition [exclusion], I think that was a positive.”

— Steven Lopez, 50, of Downey, self-employed in IT, who has opted out of coverage and pays tax penalties as a result 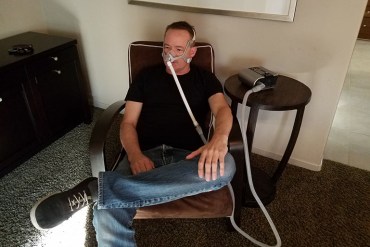 Doug Ogden was denied health coverage for preexisting conditions before implementation of the ACA. (Courtesy of Doug Ogden)

“I’m very scared. … If I have a medical emergency [without insurance], my livelihood would be ruined.”

— Doug Ogden, 54, owner of a dry cleaning business in Palm Springs, who said he only has insurance because of the health law’s protections for people with preexisting conditions

“I have diabetes and every three months I have to go to the doctor and buy medicines. … One of the drugs cost me like $115 dollars, and for us it is very difficult to buy them. I can only ask God to soften the hearts of these gentlemen.”

— Silvia Ortiz,  58, of Los Angeles, who is praying the Trump Administration does not repeal the Covered California coverage she has come to count on

Viji Sundaram of New America Media and Virginia Gaglianone of La Opinion contributed to this report.