In yet another twist for worried parents: Meet the vaping hoodie. This high school fashion mainstay — defined by a hood with drawstrings — is now available as a vaping device, ready to deliver a puff of nicotine (or marijuana) anywhere, anytime. Including in the classroom.

It marks an addition to the fleet of discreet — some would say camouflaged — vaping devices that have teachers and parents struggling to monitor the usage of a product that has surged in popularity among high school-aged kids in the past two years, despite laws in most states that allow sales only to people 18 and up. (In California, it’s 21.) 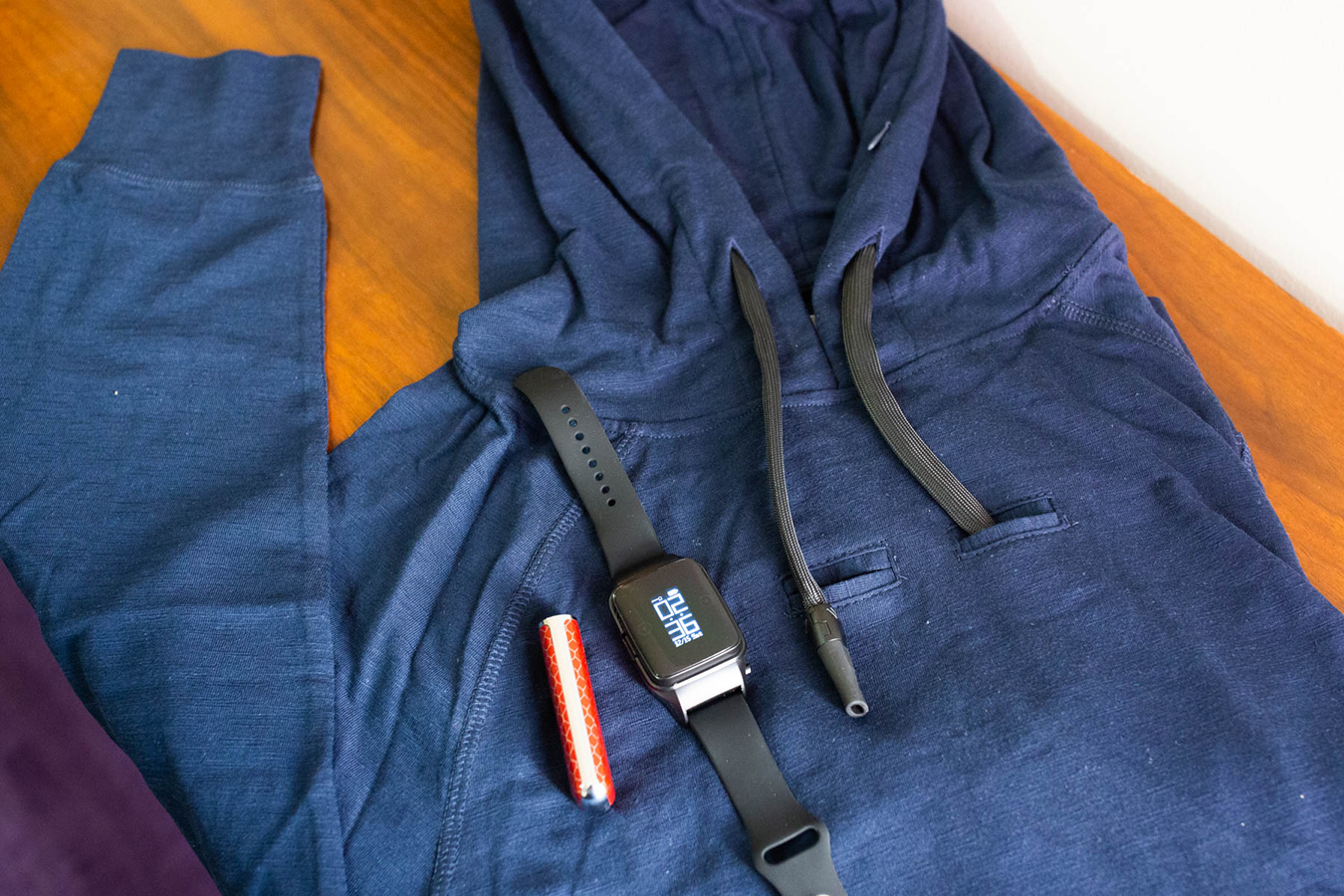 A growing number of camouflaged products – such as this hoodie, watch and flash drive – allow for “discreet” vaping. School officials say they are having a hard time keeping such devices out of schools.(Anna Maria Barry-Jester/California Healthline)

Juul, the San Francisco-based company that dominates the e-cigarette trade, and other manufacturers publicly tout their devices as tools for adults looking to get a nicotine fix without the toxins associated with burning tobacco. But the crowded market of devices and accessories that has sprung up around vaping is filled with products that seem tailored to teenagers who want to keep their use secret — and according to parents and teachers, are all but impossible to keep out of kids’ hands.

Preliminary federal data released this month show more than one-quarter of the nation’s high schoolers had reported vaping in the previous 30 days, up from 11.7 % in 2017. As the teen vaping scene has exploded, adults have had a hard time keeping up. In a 2018 survey, the Truth Initiative, an anti-tobacco advocacy group, surveyed middle and high school teachers on vaping and found that fewer than half recognized a photo of a Juul, the most commonly used device. A palm-size stick that charges via USB, it’s easily mistaken for a flash drive to the uninitiated.

Sven-Eric Jordt has seen the challenge in his kid’s school. By day, Jordt is an associate professor at Duke University, studying the health effects of inhaling various chemicals. By night, he educates his children on the potential risks of vaping. Recently, one of his daughters told him about the “Apple-like” watch manufactured by Uwell that is quickly becoming one of the more popular devices at her high school. With a touch of the finger, the face offers the time. But when removed from the wrist band, it is a vaping device.

“The teachers have learned to recognize Juul,” Jordt said, “but this just looks like a watch.”

The Centers for Disease Control and Prevention continues to investigate a spurt of vaping-related lung illnesses, mostly affecting young people. Authorities have reported 380 cases of suspected cases nationwide, including 70 in California. Seven of the cases — including two in California — have resulted in death.

It’s unclear whether a single device or agent is causing those illnesses. Most of the patients have reported vaping cannabis, according to the CDC, but some patients said they had vaped only nicotine or vaped both. In California and other states, at least some of the cases are linked to vaping unregulated cannabis products. The outbreak has focused new attention on what federal officials now characterize as an epidemic of youth vaping.

Two states — Michigan and New York — have moved to ban sales of most flavored e-cigarette products, which are popular among young people; and President Donald Trump this month said he would launch a similar effort at the federal level. In California, Gov. Gavin Newsom said this week that his administration would boost enforcement efforts against illicit and counterfeit vaping products and fund a $20 million public service campaign highlighting the dangers of vaping.

While research continues into the long-term prospects of e-cigarettes as a tool to help people quit smoking, experts say there is clear evidence that teens should not vape. Nicotine can cause changes in the developing brain that make lifelong addiction more likely. The liquids in vaping devices contain a range of chemicals that can harm the lungs.

Some schools have banned flash drives in an effort to keep vaping devices off campuses. But new stealth devices offer ways around these prohibitions. 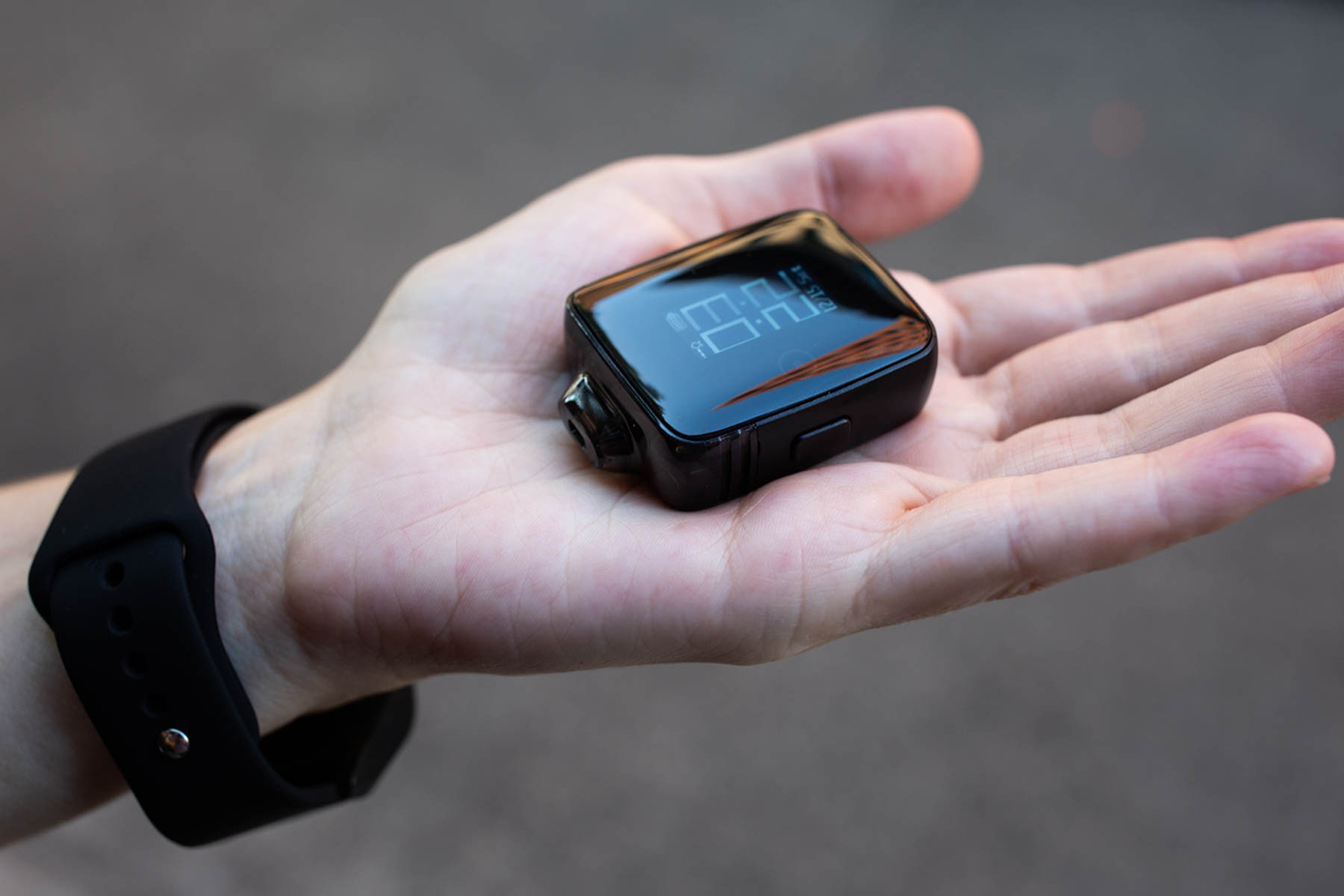 Some of the devices likely aren’t legal. A decade ago, when vaping devices first hit the market, it wasn’t clear who had the authority to regulate them. Numerous court cases and regulatory shifts later, they fall under the Food and Drug Administration’s purview and are considered a tobacco product.

Depending on when they became available for sale, devices generally fit into one of three regulatory buckets. Anything marketed before Feb. 15, 2007, is exempt from regulation. Products sold after that but before Aug. 8, 2016, have until May 2020 to submit applications to the FDA for market authorization and can be sold in the interim. Anything that was not marketed by Aug. 8, 2016, needs FDA approval to be sold in the U.S.

For example, the vape watch, which appears to have become available this July, seemingly would require authorization from the FDA to be sold in the U.S. California Healthline was able to purchase it online for $34.95.

The FDA has sent warning letters to six companies about dozens of products being sold without the required approval, and less severe notices to a few others. All but a handful pertain to the liquids used in vaping devices. The FDA did not return a request for comment on how it determines which products are a priority for enforcement.

Representatives with Uwell, which manufactures the vaping watch, did not return a request for comment.

Enforcement of age restrictions varies, and the FDA has sent dozens of warning letters to companies for selling products to underage buyers. Websites take different approaches to age verification. California Healthline recently purchased several vaping devices, and the age verification process ranged from a single click where the buyer attests he or she is at least 21 to external software designed to check the name, address and age against other databases.

Until recently, Amazon sold the components of products that allowed people to build their own marijuana vapes. Some of these products have been linked to the current deadly outbreak. The online giant removed them after Minnesota Public Radio inquired about their sale.

In a statement, Tony Abboud, executive director of the Vapor Technology Association, one of the industry’s largest trade groups, blamed a few bad actors and illegal sales to ineligible customers, saying that the group “does not approve of youth use of any nicotine products, including these accessories.”

In absence of more aggressive federal efforts to keep these devices off the market, parents and teachers are left with the Sisyphean task of trying to keep them out of kids’ hands.

Ira Sachnoff has been a youth tobacco educator in the San Francisco Bay Area for decades. He says the skyrocketing popularity of the Juul-era pod systems has made this new generation of nicotine products tough to combat. “Schools are freaked out. They don’t know what to do because they are busting kids like crazy with these devices,” he said.

Some schools are installing vape detectors in bathrooms. Others are sending students caught vaping to counseling. The most important first step for parents and school staff, Sachnoff said, is to learn what the devices look like.

With a group at Stanford University, Sachnoff created the Tobacco Prevention Toolkit, a widely used collection of resources aimed at preventing middle and high school students from using nicotine products. One section includes links for parents and guardians to familiarize themselves with the devices and learn to talk with their kids about nicotine.

But with newer and smaller devices hitting the market, kids motivated to vape will have the upper hand. That’s why Sachnoff and other tobacco educators train peer counselors, fellow students who can talk about the risks. They hope they can convince kids that, like cigarettes, which have fallen out of favor in recent years, vaping isn’t cool and isn’t worth the gamble.

“I’ve been doing this for a long time,” Sachnoff said, “and I’ll be damned if after 25 years we’re gonna let this happen again.”