Shawn Hayes was thankful to be holed up at a city-run hotel for people with COVID-19.

The 20-year-old wasn’t in jail. He wasn’t on the streets chasing drugs. Methadone to treat his opioid addiction was delivered to his door.

Hayes was staying at the hotel because of a coronavirus outbreak at the 270-bed Kirkbride Center addiction treatment center in Philadelphia, where he had been seeking help.

From early April to early May, 46 patients at Kirkbride tested positive for the virus and were isolated. The facility is now operating at about half-capacity because of the pandemic.

Drug rehabs around the country — including in Pennsylvania, Illinois, Indiana, Minnesota and Florida — have experienced flare-ups of the coronavirus or COVID-related financial difficulties that have forced them to close or limit operations. Centers that serve the poor have been hit particularly hard.

And that has left people who have another potentially deadly disease — addiction — with fewer opportunities for treatment, while threatening to reverse their recovery gains.

“It’s hard to underestimate the effects of the pandemic on the community with opioid use disorder,” said Dr. Caleb Alexander, a professor of epidemiology and medicine at the Johns Hopkins Bloomberg School of Public Health. “The pandemic has profoundly disrupted the drug markets. Normally that would drive more people to treatment. Yet treatment is harder to come by.”

Drug rehabs aren’t as much of a COVID “tinderbox” as nursing homes, Alexander said, but both are communal settings where social distancing can be difficult.

Shared spaces, double-occupancy bedrooms and group therapy are common in rehabs. People struggling with addiction are generally younger than nursing home residents, but both populations are vulnerable because they’re more likely to suffer from other health conditions, such as diabetes or cardiovascular disease, that leave them at risk of succumbing to COVID-19.

To keep clients safe, some addiction treatment centers employ safety precautions similar to hospitals, like testing all incoming patients for COVID-19, noted Dr. Amesh Adalja, a senior scholar at the Johns Hopkins University Center for Health Security. But drug rehabs must avoid some strategies, such as keeping potentially intoxicating hand sanitizer on the premises.

“There’s not going to be anything that’s zero risk, in the absence of a vaccine,” he said. “But this is in a different category than going to a birthday party. You don’t want to postpone needed medical care.”

Still, some people requiring drug or alcohol rehab have stayed away for fear of contracting COVID-19. Marvin Ventrell, CEO of the National Association of Addiction Treatment Providers, said many of its roughly 1,000 members saw their patient numbers down by much as 40% to 50% in March and April before bouncing back to 80%.

Unlike many other centers, Recovery Works, a 42-bed treatment center in Merrillville, Indiana, has seen more clients than normal during the pandemic. The facility had to close for a few days early on after a suspected COVID-19 case, but reopened after the person tested negative. It has since split its therapy sessions into three groups, staggered mealtimes and banned visitors, CEO Thomas Delegatto said. It then had an influx of patients.

“I think there are a variety of reasons why,” Delegatto said. “A person who was struggling with a substance use disorder, and who was laid off and a nonessential worker, might have seen this as an opportunity to go to treatment without having to explain to their employer why they’re taking two, three, four weeks off.”

He also noted that alcohol sales went up at the beginning of the pandemic as anxiety and isolation rose, and sheltering in place may have made some families realize that a loved one needed help for an addiction. 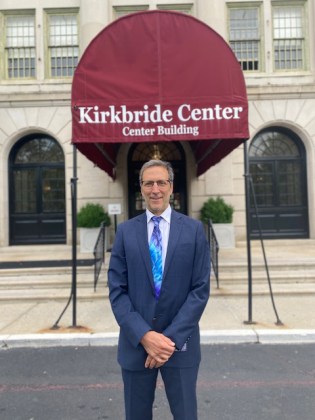 Kirkbride Center, an addiction treatment center in Philadelphia, is running at about half-capacity after a recent COVID-19 outbreak.
Dr. Fred Baurer, Kirkbride’s medical director, says, “I’m starting to feel more confident we’re past the worst of this, at least for now.” (Courtesy of Dr. Fred Baurer)

Homeless and poor Americans, because they often live in close quarters, have been particularly prone to catching COVID-19 — leaving drug rehabs dedicated to this population especially vulnerable.

Haymarket Center, a 380-bed treatment and sober living facility in Chicago’s West Loop that serves many people who are homeless, recently had an outbreak of 55 coronavirus cases among clients and staff members.

Two employees there tested positive for COVID-19 in late February, but testing was available then only for people showing symptoms, said Haymarket president and CEO Dan Lustig.

Haymarket worked with nearby Rush University Medical Center to test its clients. Twenty-six men, though asymptomatic, were found to be positive for COVID-19.

The center isolated those patients and eventually went from double- to single-occupancy rooms, improved its air filtration system and changed the way it served food. It now tests all new admissions.

“What we found was by doing serial testing we could tamp down the epidemic, not just at Haymarket but the whole city,” said Dr. David Ansell, senior vice president for community health equity at Rush, which partnered with the city and other health systems on a COVID-19 response for Chicago’s homeless population.

The pandemic’s economic fallout has also forced some facilities to scale back. The Salvation Army is shuttering a handful of its roughly 100 adult rehabilitation centers nationwide due to COVID-related revenue losses. Those rehabs were funded by the organization’s resale shops, which were forced to close during stay-at-home orders.

“A lot of what we do relies on donations or items that were donated and then sold in our stores,” said Alberto Rapley, who oversees business development for the Salvation Army’s rehab facilities in the Midwest. “When financially we struggle, that is then felt on the other side.”

For instance, the Salvation Army drug rehab in Gary, Indiana, which is set to close in September, treated as many as 80 men at a time in its free, abstinence-based program. The next closest facility will be in Chicago, more than 30 miles away.

On April 8, the first COVID-19 case appeared on Kirkbride’s long-term men’s wing. Over the next week, six more men on the unit showed symptoms and tested positive, as did 12 of the remaining 22. All quarantined at a local Holiday Inn Express.

Kirkbride started requiring face masks, testing all new clients for COVID-19 and prohibiting people in its various units from mingling.

The rehab has been about half-full lately — it’s usually closer to 90% occupied — partly because it stopped taking walk-in clients and confined new admissions to single rooms.

“I’m starting to feel more confident we’re past the worst of this, at least for now,” Baurer said.

Hayes, who has recovered from COVID-19 without experiencing any symptoms, was discharged from the facility June 15 to a sober living house. He plans to attend 12-step meetings regularly. He hopes to get his GED and eventually enter the mental health field.

He recognizes the need to stay vigilant about his recovery now, at a time of increased anxiety and despair.

“Regardless of the coronavirus or not, the addiction crisis is still there,” Hayes said. “It’s bad. It’s really bad.”