SACRAMENTO, Calif. — “Vivan los inmigrantes!” echoed through the halls of the state Capitol on Wednesday as immigrants and activists gathered to push for legislation that would extend full Medicaid coverage to adults in the country illegally.

Sons and daughters clutched photos of their late parents. If they had had health insurance, maybe they would still be alive, they said.

Others held “Health for All” signs and practiced the testimony they planned to give inside the fourth-floor hearing room.

The scene outside the hearing room for #sb29 #health4all pic.twitter.com/CHNBsAQAcZ

Before the hearing, Benjamin Carranza, 38, of San Bernardino, Calif., held a photo of his mother, who worked in the U.S. for many years but never had health insurance because of her immigration status.

“She began to feel sick, and when we were finally able to go to the doctor, we found out she had an advanced stage of cancer,” he said in Spanish.

Benjamin’s mother died from advanced cancer. He says she was unable to get health insurance because of her immigration status #sb29 #health4all pic.twitter.com/udKkvdvGng

Lidia Lopez, who works as a promotora, or health educator, said she hears these kinds of stories all the time.

Lopez, 50, of Ventura County, Calif., works with fruit pickers. When the Thomas Fire flared in December 2017, they were overcome by smoke and many developed asthma symptoms.

Many of them lacked health insurance, so they postponed doctor visits. “I know of at least one man who couldn’t afford medical costs on top of his rent, so he returned to Mexico,” Lopez said. 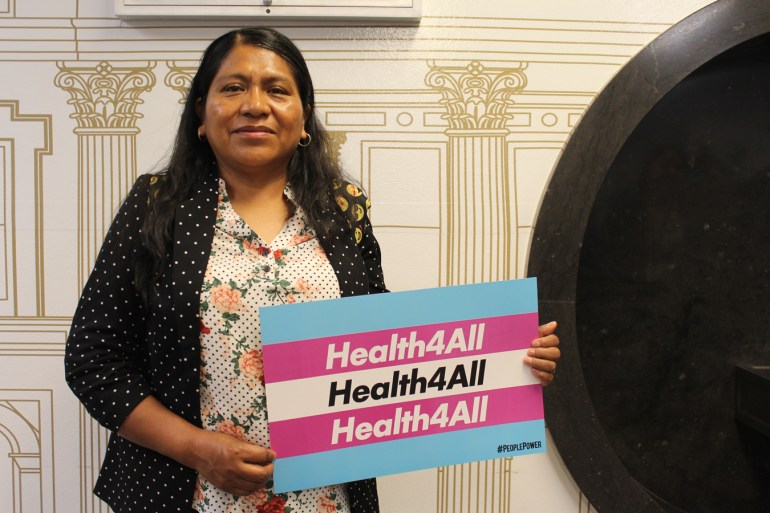 Lidia Lopez, who works as a health educator in Ventura County, stands outside a Capitol hearing room where a committee approved a bill that would expand Medicaid coverage to unauthorized immigrant adults.(Ana B. Ibarra/California Healthline)

Unauthorized immigrants make up about 58 percent of the remaining uninsured population in California, and an estimated 1.2 million of them would qualify for Medi-Cal based on their incomes, the state Legislative Analyst’s Office estimates.

Since May 2016, California has allowed low-income youths up to age 19 to sign up for Medi-Cal, California’s Medicaid program, regardless of their immigration status. As of January, nearly 269,000 children had enrolled in the program, according to the state Department of Health Care Services.

But previous proposals to expand coverage to adults have stalled in the legislature, in large part because of the price tag. Even though Medicaid is funded by both state and federal money, California would have to pay for the entire cost of covering undocumented immigrants.

That could cost $3 billion in the first year, according to the Legislative Analyst’s Office.

State Assemblyman Jay Obernolte, the ranking Republican on the Assembly Budget Committee, said Medi-Cal should be improved before it is expanded. As it is, some of his constituents in northern San Bernardino County have trouble getting care because many doctors are unwilling to accept Medi-Cal’s low reimbursement rates, he said.

We have an obligation to “make the system work for people who are currently covered by Medi-Cal before we even have a discussion about opening that up to more populations of people,” Obernolte said from his Capitol office.

On the other side, Republican lawmakers like Assemblyman Jay Obernolte say Medi-Cal should be improved before expanded. #SB29 pic.twitter.com/QOSzO2iigS

But advocates argue that qualified people of all ages should be covered.

Carolina Gamero, spokeswoman for the California Immigrant Policy Center, said young immigrants aren’t the only ones left out of the health care system, noting that most family breadwinners are older than 25.

“Their income goes toward paying the rent, towards putting food on the table — and health care access just happens to be one of the things that doesn’t make the cut,” she said.

Inside the hearing room, the committee heard a procession of voices in support of the measure by state Sen. Maria Elena Durazo (D-Los Angeles). Some supporters who spoke broke into tears describing their loved ones’ suffering. No members of the public spoke out against the measure.

An identical bill has also been introduced in the state Assembly.

The committee approved the bill on a 7-1 vote.

State Sen. Jeff Stone (R-Temecula) was the only “no” vote. “This is going to be a very expensive law,” he said.

After the hearing, a delighted Durazo rejoiced.

“It’s a next step in moving towards expanding Medi-Cal to cover every Californian, no matter what their immigration status,” she said.

Senator @MariaEDurazo reacts after her first bill, which would expand Medi-Cal eligibility to undocumented immigrants, was passed through the Senate Health Committee 7-to-1 #sb29 #caleg pic.twitter.com/eX2R4anQgb