This story also ran on San Francisco Chronicle. This story can be republished for free (details).

OAKLAND, Calif. — Dr. Huong Le spends an average of 45 minutes with each of her dental patients during their visits, so she gets to know them well, especially the older ones who come in more than twice a year.

She hears about their families, stories from their home countries and, often, how lonely they feel. More than once, Le and her staff at Asian Health Services have heard their patients express suicidal thoughts.

This prompted Le, a dentist of more than 30 years, to respond to her patients’ cries for help. Her dental clinic, near Oakland’s Chinatown, started depression screening for patients 65 and older in 2017.

Then Le took the concept one step further last year by hiring a full-time mental health counselor and giving her an office right at the dental clinic, where she can see patients immediately, should they need it. Later this year, the depression screenings and counseling services will expand to patients 12 and older.

“When you have someone who is telling you they’re going to go home and kill themselves, and you think, ‘I’m a dental provider; what can I do?’ — that was one of the moments when I knew, wow, we need someone, a professional who is trained in this here,” said Le, the chief dental officer at Asian Health Services. The community health clinic, which operates several sites in Alameda County, primarily caters to Asian immigrants, a group that often shuns behavioral health services because of the stigma associated with mental illness. 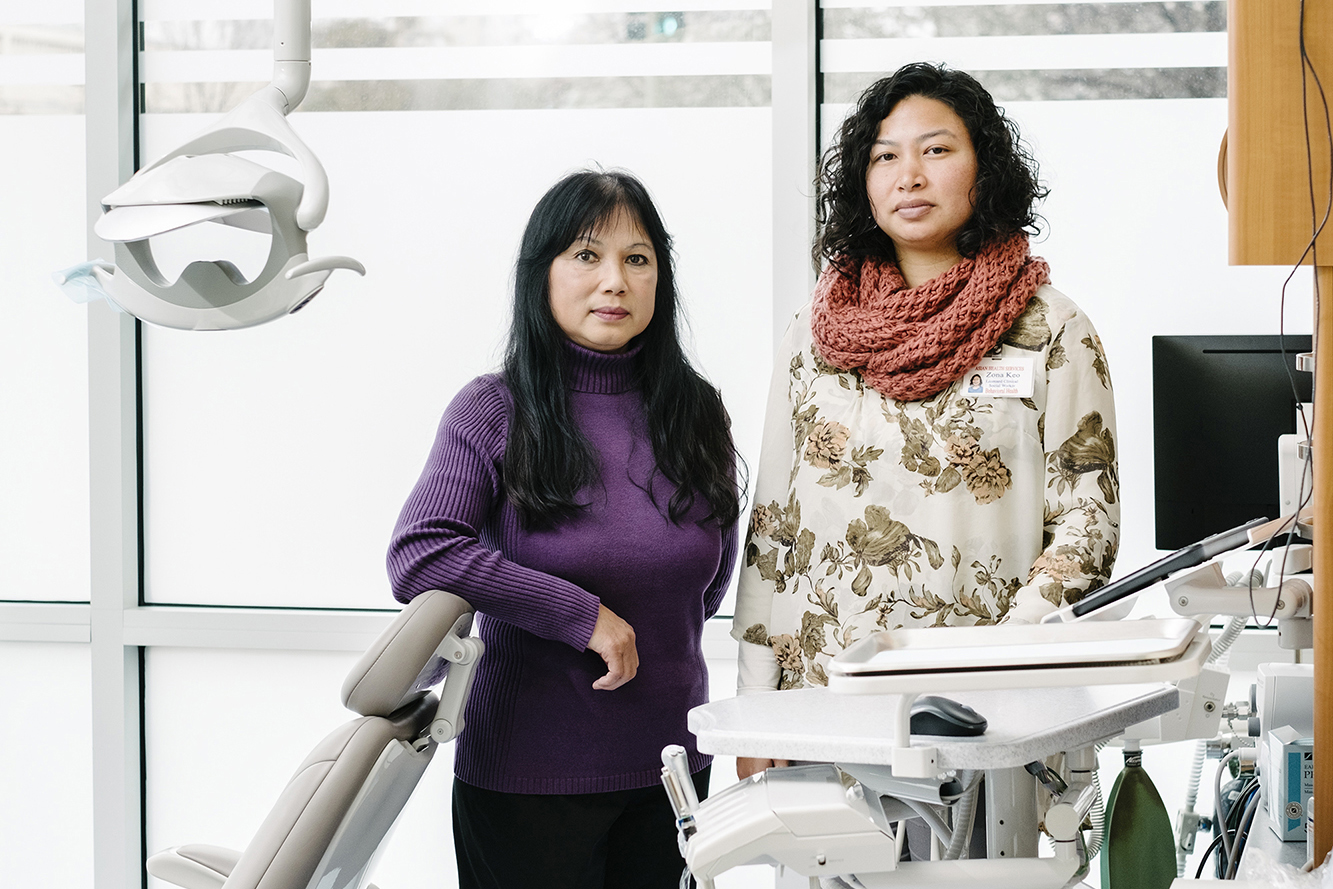 The kind of immediate, in-house handoff offered by Asian Health Services is available at many medical clinics. But it’s a new concept at community dental clinics and virtually unheard of at private dental offices — even though some experts praise the model as an innovative way to make mental health services accessible to hard-to-reach populations.

Dr. Irene Hilton, a dental consultant at the National Network for Oral Health Access, said she hasn’t heard of any other community dental clinics that embed a mental health practitioner right in their office.

Doing so “totally makes sense,” Hilton said. “You can’t really engage in self-management of a chronic disease, including gum disease, or cavities, if you’re not in the right frame of mind,” she said.

“Depression affects such a large segment of the population that all avenues that can be used to steer patients” should be utilized, she said.

Flamer-Caldera does not screen for depression at her dental office, but she is trained to look for signs of it. She encourages patients to visit their primary care doctors if she thinks they would benefit from professional help.

At Asian Health Services, dental patients receive a stack of forms when they check in. One is a survey that asks whether they experience anxiety, feel sad or have had negative thoughts.

If they respond yes to these or similar questions, they’re invited to chat with Zona Keo, the social worker and mental health counselor embedded in the clinic, after the dentist sees them. They can also make an appointment for a later date.

People in the diverse and low-income populations served by community health centers often don’t seek mental health services on their own, Keo said, and they face transportation, language and cultural barriers.

That’s why she believes it’s critical to offer her services in a place patients already plan to visit, like a dental clinic.

Stereotypes and misconceptions about mental health are common among the older immigrants served by Asian Health Services, but even some younger patients are reluctant to seek help, Keo said.

“We have patients whose parents were refugees, and they feel guilty to talk about mental health because they think, ‘Well, my parents went through an actual struggle — they went on a boat, swam across a river, walked through bombs, and here I am complaining about mental stress,’” she said. “So they keep quiet.”

To avoid scaring patients away from mental health services, Keo refrains from using terms like “emotions” or “therapy.”

“I have to feel out the patient and say what I think is appropriate for each individual,” said Keo, who speaks the Cambodian language Khmer, in addition to English.

Donna Jung, a longtime social worker at Asian Health Services who works in a different building, noted that having a mental health provider there makes it easier for patients to avoid saying they’re going to therapy, because it’s a dental office.

“Some patients don’t even tell their families” out of fear of being stigmatized, but also because they don’t want to worry their children, Jung explained.

So far, Keo’s list of referrals from the dental clinic has been short and patients frequently cancel mental health appointments or say they feel better after one visit, she said.

When the clinic starts screening younger patients later this year, and as patients become more familiar with her role, Keo expects the list to grow.

“I want patients to know we’re here for them,” she said, “and that this is a dental office but also a safe space for mental health.”