When Sam Mazaheri was 9, he was diagnosed with Type 1 diabetes. That means Sam’s body makes little or no insulin, a hormone that turns food into energy.

“All of a sudden I had to manage everything he was going to take, including the insulin,” said Sam’s mom, Nasim Mazaheri.

It was frightening, she said, and it felt like bringing home a newborn all over again.

Type 1 diabetes is a lifelong condition that can be managed with medication. But without insulin, the body can no longer move glucose from the blood into the cells and, eventually, will stop working. More than 1 million people in the U.S. have been diagnosed with Type 1 diabetes, according to a 2017 report from the Centers for Disease Control and Prevention.

The Mazaheris, who live in Irvine, Calif., say adjusting to their new normal was tough for the whole family.

Sam, now 14, began wearing an insulin pump attached to his stomach. The pump is a computerized device that is programmed to deliver small doses of the hormone. He also had a separate glucose monitor on the back of his arm that beeped when his insulin levels needed attention.

Sam had to learn to count carbs and pay close attention to his food intake so he could calculate how much insulin he needed at mealtimes — a lot for a 9-year-old to manage. 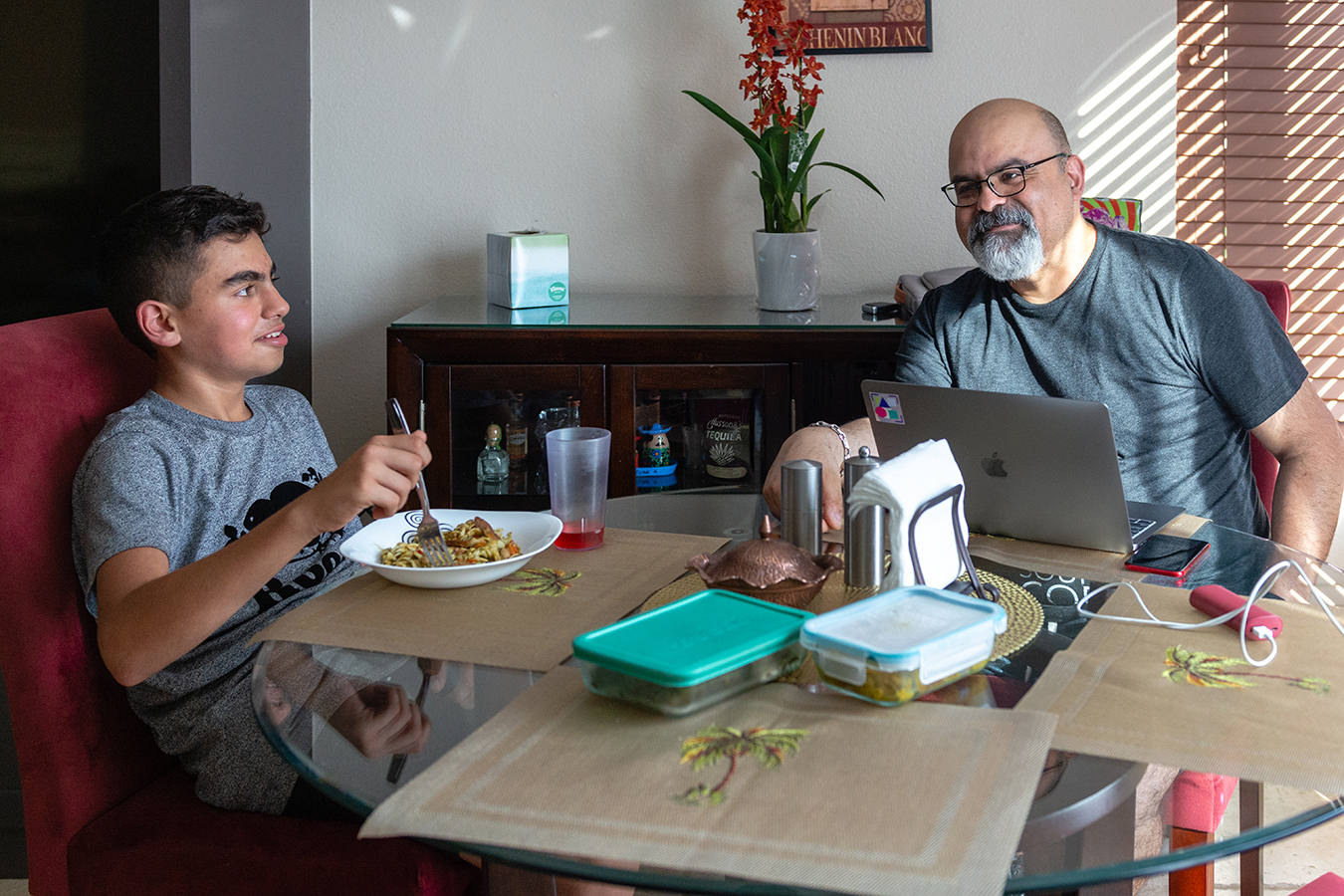 Sam and his father, Ali, have lunch together at home in Irvine, Calif. (Heidi de Marco/California Healthline)

Plus, Sam was tethered to his parents. The first few months, they needed to stay close to track his glucose levels and make the appropriate corrections.

“I was checking on him constantly throughout the night,” Nasim said.

Sam was a sound sleeper and wouldn’t hear the beeping of the alerts in the middle of the night. Worried, Nasim eventually moved into Sam’s room and slept in the bed with him.

Frustrated and fed up, Sam’s dad ― who works at Microsoft ― decided he could use his tech skills to make his son’s life more manageable.

Ali discovered an online community of people also looking for ways to live better with diabetes. After scouring Twitter and networking with others in the tech industry, he stumbled onto something called “looping.”

Using instructions freely available online, do-it-yourselfers ― who belong to what’s known as the “open-source community” ― close the loop between an insulin pump and a continuous glucose monitor. It creates a new system that connects the two separate devices, allowing them to talk to each other with the help of a transmitter, and deliver insulin to the body automatically. They call that “looping.” 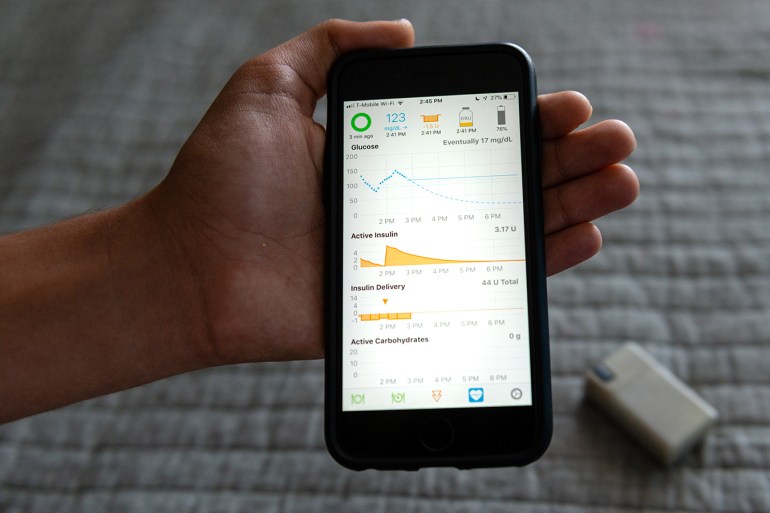 Sam tracks his glucose levels on his phone with the help of an open-source code called Open Artificial Pancreas System (OpenAPS), known in the diabetes community as “looping.”(Heidi de Marco/California Healthline) 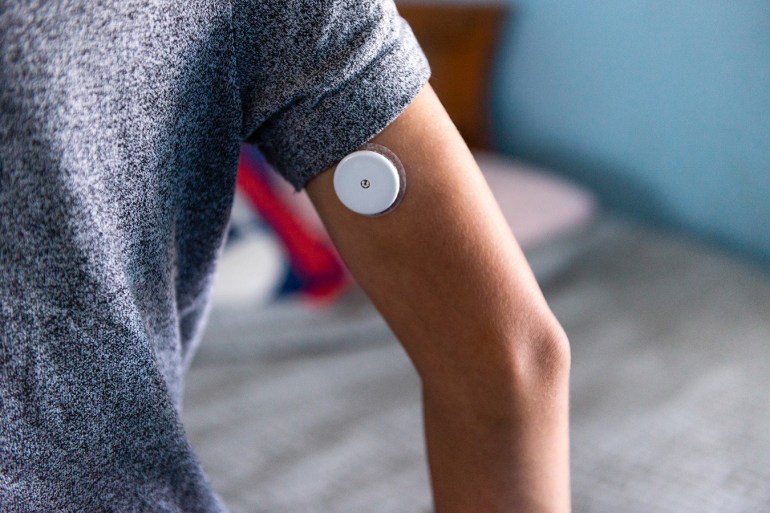 Sam uses a continuous glucose monitor on the back of his arm.(Heidi de Marco/California Healthline)

The system sends commands based on frequent glucose readings, adjusting Sam’s insulin throughout the day.

Looping works only on older-model insulin pumps because the wireless technology is different on newer pumps. So Ali scoured the internet and found a few on Craigslist for about $600 each.

“There was a black market,” he said.

Ali and Nasim are able to monitor Sam’s glucose levels using their smartphones and smartwatches, no matter where he is.

That first time he tried it out on Sam, Ali said, there was one more sleepless night. 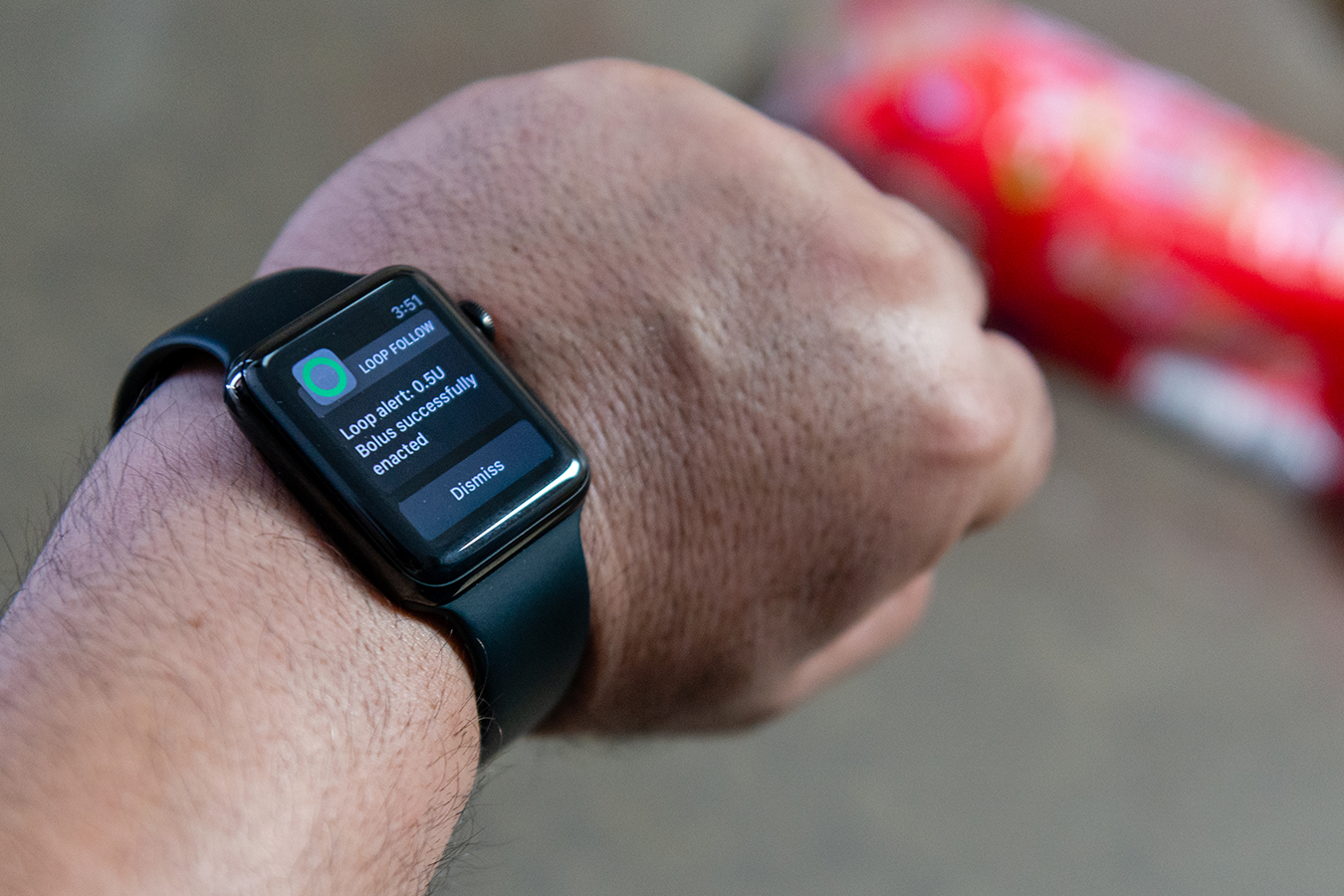 The closed-loop concept began with people who were frustrated that there aren’t more ready-made, commercial options. And some people have rallied around the hashtag #WeAreNotWaiting to express their impatience for better health-data innovations to manage their diabetes.

Looping advocate Dana Lewis, who lives near Seattle, says she knows of about 1,500 people experimenting with looping to control their diabetes.

In 2015, Lewis was one of the first to provide open-source code to others online. Now people go to her website, OpenAPS, for step-by-step instructions.

The Mazaheris have been looping for four years and Ali says they haven’t had any issues. 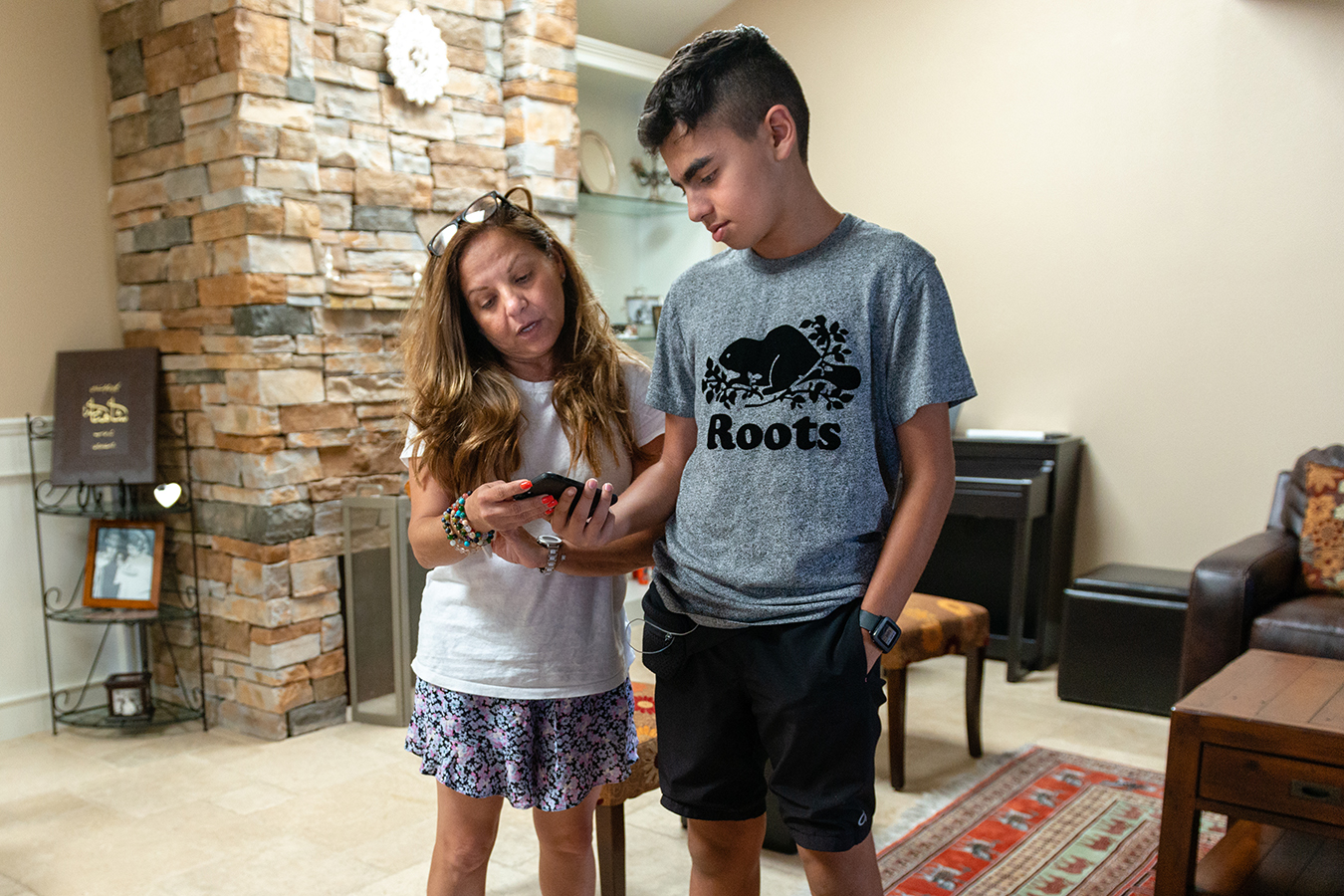 But in May, the Food and Drug Administration issued a warning.

“Use of unauthorized devices could result in inaccurate glucose level readings or unsafe insulin dosing, which can lead to injury requiring medical intervention or death,” it said.

An FDA spokesperson said the warning was issued after the agency received a report that a patient using an unauthorized device experienced an accidental insulin overdose that required medical attention.

Endocrinologist Dr. Irl Hirsch said several of his patients use looping systems to manage their diabetes.

“To date, the patients I’ve cared for who are looping have done amazingly well,” said Hirsch, who is with the Diabetes Institute at UW Medicine in Seattle.

But Hirsch has his own warning.

“I tell my patients who do this, it has to be at their own risk. There isn’t a pump manufacturer that will take care of them if something goes wrong, and I can’t be held responsible if there is a problem,” he said.

The FDA also wants people to be aware that certain recalled devices are susceptible to cybersecurity risks. The FDA said there are no documented cases, but it’s possible that someone other than a patient could change a pump’s settings wirelessly.

Those warnings haven’t deterred Ali Mazaheri, who said looping allows Sam to be independent and just be a kid.

There is an FDA-approved medical device that closes the loop between an insulin pump and blood sugar monitor, and similar devices in the pipeline. But open-source users say they’ll continue to program their own devices because that gives them more flexibility to personalize their diabetes management. 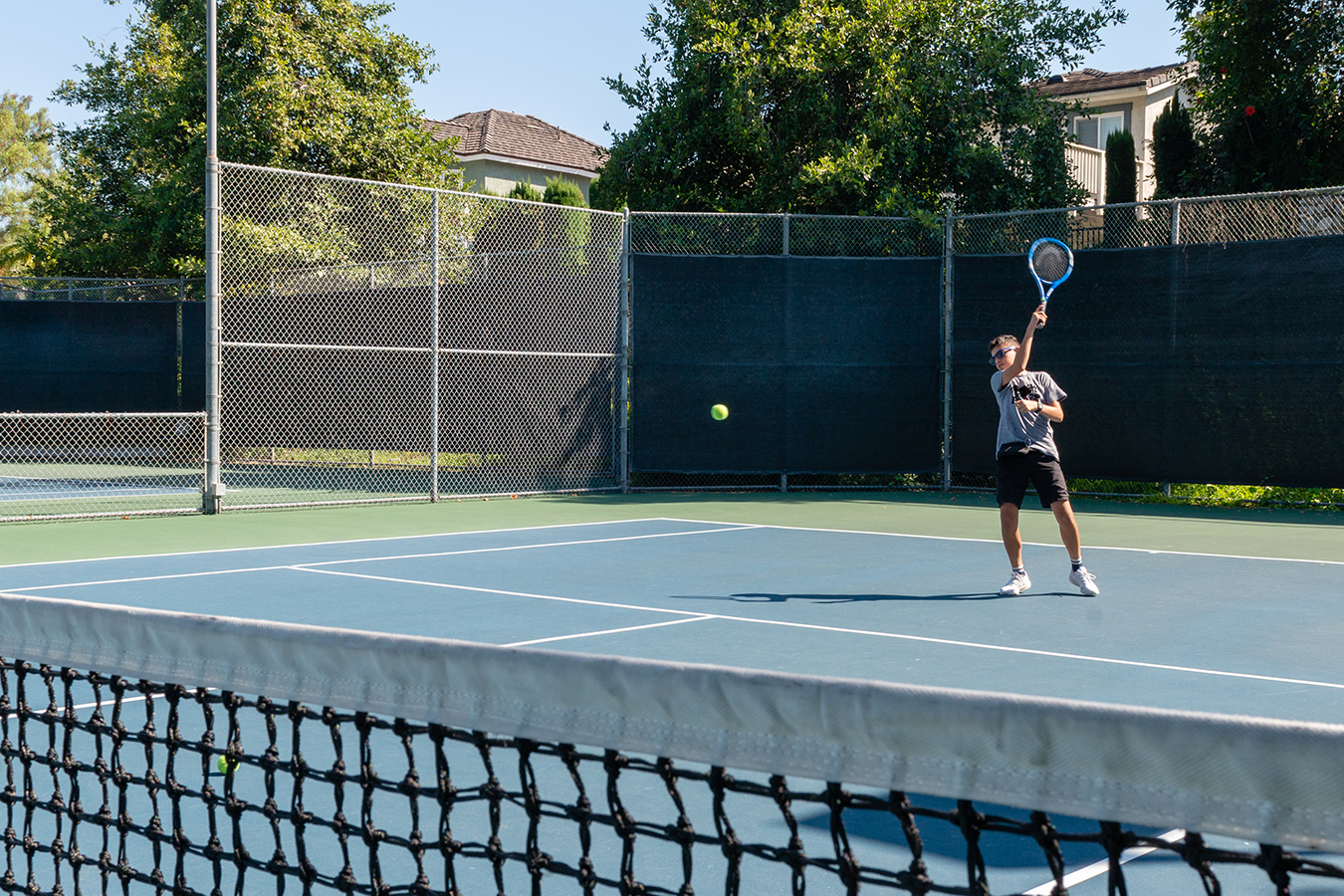 While at tennis practice, Sam wears a fanny pack around his waist that holds his insulin pump, cellphone and a credit-card-sized device that transmits commands to the pump. (Heidi de Marco/California Healthline)

Sam starts high school in September. He’s an amazing tennis player and an avid collector of Star Wars memorabilia. He also wears a SPIbelt around his waist, a fanny pack that holds his insulin pump, his phone and a credit-card-sized device that transmits commands to the pump.

“Now the pump won’t go off in the middle of the night as much as it did,” Sam said.

These days, his blood sugar is almost always in a healthy range.