The just-departed commissioner of the Food and Drug Administration has concerns about plans to speed up drug approvals and dramatically reduce regulations at the agency, as advocated recently by President Donald Trump.

Dr. Robert Califf, who stepped down last month, shared his thoughts about keeping Americans safe — and making sure drugs actually work — after about a year overseeing the federal agency. His takeaways:

“What I’m concerned about is that when people hear ‘faster approval,’ you get an image of the FDA sitting on this application and, you know, twiddling thumbs,” Califf said. “That’s not what happens.”

Califf explained that the slow part of getting a drug into patients’ hands happens well before the drugmaker submits an application to the FDA. It can take decades to discover, tweak and test a new drug molecule, and that development process is what needs a boost. 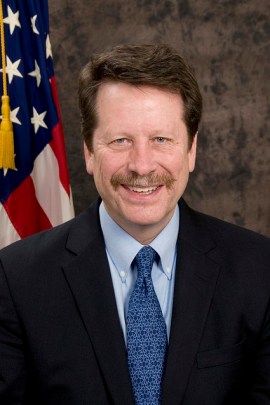 “The concept of safety is much more complex than most people think about until they look into it deeply,” said Robert Califf, just-departed FDA administrator. (Courtesy of the FDA)

“The real action [happens] before the application gets submitted and that can be a time frame from years to decades as people try to figure out what will work and what will not,” Califf said.

2. A law passed in December should streamline drug approvals — in a positive way.

The 21st Century Cures Act, a bipartisan bill signed by President Barack Obama late last year, is a “very well-rounded piece of legislation that will speed up product development.”

To begin with, it encourages the FDA to consider pieces of information in its approval process in addition to traditional clinical trials, including “real world evidence” and biomarkers. Biomarkers are used in studies in place of outcomes that are more difficult to measure. For example, tumor shrinkage is sometimes a biomarker for surviving cancer.

“Using real world evidence in clinical trials is one that I’m particularly excited about as a way to get better answers at a lower cost and faster at the same time,” Califf said.

“The concept of safety is much more complex than most people think about until they look into it deeply,” Califf said. “All drugs have risk. None of them are absolutely safe. And the actual safety risks are only revealed through clinical trials with the same quality and number of patients involved as it takes to look at efficacy.”

About 92 percent of drugs that get into human clinical trials don’t make it to market because they fail to show any benefit or, worse, they have unexpected toxicity, he said.

“Declaring a drug is safe after very little information is treacherous,” Califf said.

Califf recently wrote for JAMA on the FDA’s balancing act of protecting the public and encouraging innovation. And the FDA released a paper last month documenting examples of a promising drug, vaccine or device that each did well in a Phase 2 clinical trial but “bombed out” in Phase 3, Califf said. Drugs typically go through three “phases” of studies called clinical trials before gaining FDA approval. With each new phase, researchers test drugs or other products on more people and on more measures of safety and effectiveness.

“It’s 22 examples of why it’s a big mistake to think that you can judge the balance of risk and benefit from a small amount of data,” Califf said.

4. Faster, better drugs can’t be approved if the FDA is understaffed, he argued.

Califf called a potential FDA hiring freeze “unfortunate” and said new staff is needed to meet the faster approval timelines and to give advice to those developing drugs so “bad mistakes” aren’t made.

The FDA has been steadily hiring staff to keep up with the growing industry it oversees. But hundreds of openings are still left to be filled.

Califf said the drug industry’s most valued interaction with the FDA is “during the process of [drug] development,” which begins before a drug application is submitted for approval. FDA staff can provide timely feedback and advice that can help a company choose the right studies needed for approval and, effectively, speed up drug development.

“A hiring freeze at this time when we are just revving up with 21st Century Cures is unfortunate. I hope that the dust will settle soon and the FDA can get back to its hiring,” Califf said.

5. The FDA is using big data to track the safety of drugs already on the market — and it plans to do that a lot more.

The FDA has an established adverse event database but after pain reliever Vioxx was pulled from the market in 2004, the agency began working on a system called Sentinel.

The initiative uses claims data to look at drug safety. It has 180 million individual electronic records and tracks every dispensed prescription, hospitalization as well as serious outcomes, Califf said. In addition, Sentinel is now being opened up to industry and academia.

“It’s used every day by the FDA,” Califf said, adding that the system is “getting better and better.”