SACRAMENTO, Calif. — The nurses are back with their gloves off — and not the disposable medical kind.

Despite a legislative setback last year — dealt by one of the state’s top Democrats, of all people — the powerful California Nurses Association stormed the state Capitol Wednesday to resume their campaign for single payer health care.

A few hundred of the union’s members and supporters, dressed in cherry-red sweatshirts and hats, crowded the north steps of the Capitol on Wednesday morning, pumping their fists and chanting “Everybody in! Nobody out!”

Hours before a marathon hearing on the issue began, they toted around mass-produced signs and bopped to an Afro-Latin-hip-hop band, all in support of a single-payer bill that Assembly Speaker Anthony Rendon described last year as “woefully incomplete.”

“The only thing that’s incomplete is the leadership,” declared Bonnie Castillo, a former critical-care nurse who is the union’s associate executive director.

Castillo, the first speaker, set a defiant tone for the raucous event, which took place just before an informational hearing on the bill that would replace private insurance with one government-administered or “single-payer” health care system in California. 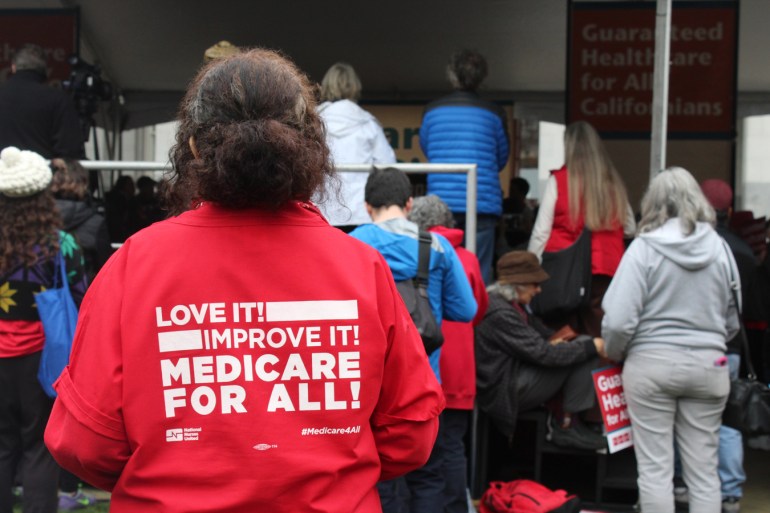 A couple of hundred people chant in support of the single-payer bill, SB 562, sporting red and signs during a rally outside the state Capitol on Wednesday. (Ana B. Ibarra/California Healthline) 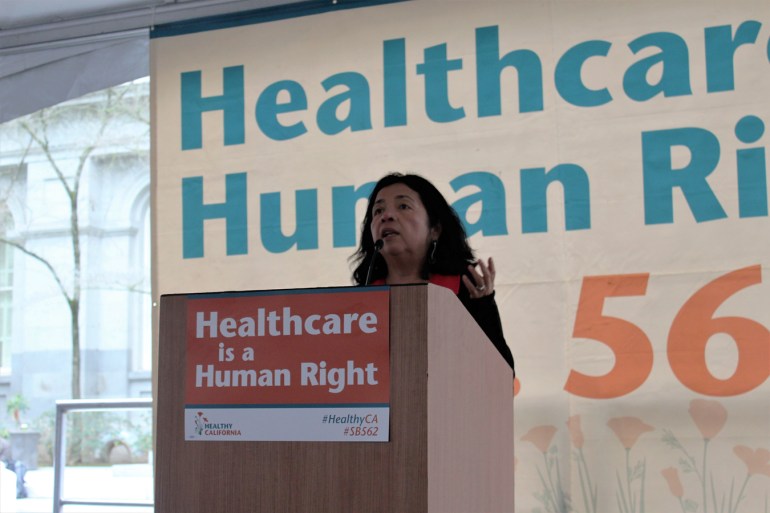 Bonnie Castillo, a registered nurse and associate executive director for the California Nurses Association, tells the crowd “the only thing that’s incomplete is the leadership,” while addressing concerns about single-payer bill SB 562 during a rally outside the Capitol. (Ana B. Ibarra/California Healthline)

The union has been the most ardent supporter of single-payer in the state. The nurses say the health care system they work for now leaves some people who can’t afford to pay sick, struggling and in debt.

They stand in stark contrast to others in the medical field, who have banded together to form a coalition opposing the single-payer bill, SB 562. The bill “would dismantle the health care marketplace and destabilize the state’s economy,” the group of physicians, dentists, nurse practitioners, community clinics and others said in a press release.

Rendon yanked the bill from further consideration last June, saying it did not address serious issues such as financing and cost controls.

In that instant, Rendon became the union’s No. 1 enemy. At the time, the union’s executive director, RoseAnn DeMoro, tweeted a picture of the iconic California grizzly bear being stabbed in the back with a knife emblazoned with Rendon’s name. Rendon said he was besieged by death threats.

During the hour-long rally under overcast skies and a foggy drizzle, the mere mention of his name elicited boos.

“We have the tenacity, the determination and the will to continue. We’re not stopping until we get this passed,” Catherine Kennedy, an intensive-care nurse in Sacramento and secretary for the organization, told a California Healthline reporter. 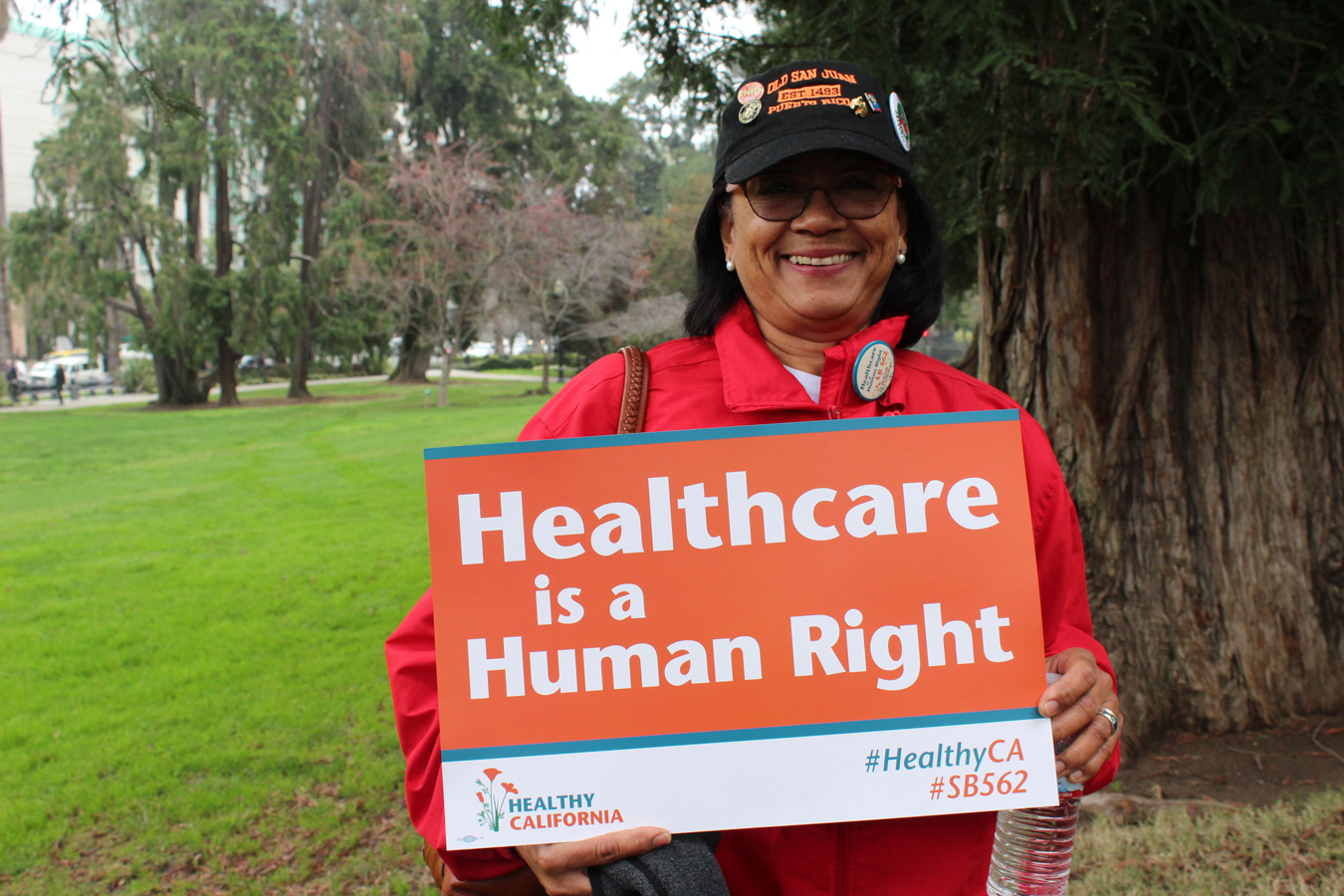 Catherine Kennedy, a registered nurse and secretary for the California Nurses Association, says the group has the tenacity and will to put up a fight for single-payer legislation. (Ana B. Ibarra/California Healthline)

The union says it has 100,000 members. The fact that most are women makes it much stronger, Kennedy said, especially at a time when women are feeling more empowered.

“Time’s up on that!” some yelled in front of the Capitol, echoing the #TimesUp movement that has gained momentum as women nationwide speak out about sexual harassment and other gender-related discrimination.

Earlier this month, Rendon told reporters that the bill’s sponsors had not responded to his concerns — including how to pay for a single-payer system. “Absolutely nothing has happened with the bill,” he said. “The sponsors of the bill have sat on their hands and done nothing for the past six months.”

That comment is “insulting and disrespectful to all these people who have been knocking on doors … and participating in every committee hearing,” Castillo said after the rally.

Castillo added that the union commissioned an economic analysis of the proposal that was never robustly discussed in the legislature.

Inside the committee room, the hearing, which started at 1 p.m., stretched into the evening as nurses dominated the public comment period. Throughout the testimony, they scoffed and mock-coughed at comments they disagreed with.

They promised to be back with more noise, more rallies and more pressure until single-payer makes it through the legislature.

“The intent is to get us to shut up,” Castillo said, “but that’s not going to happen here.”