Republicans are touting their health plan as the right medicine for ailing insurance markets across the country, from Arizona to Tennessee.

Now state and insurance industry officials fear the replacement plan for the Affordable Care Act, introduced by GOP leaders this week, would threaten those gains. They warn that the proposal, which would cut subsidies to lower-income consumers, could undermine the broader market, driving up premiums for the wide range of Californians who purchase their own coverage.

Republicans and some industry analysts say those fears are overblown and that the GOP replacement plan would strengthen the individual insurance market by lowering premiums for young, healthy people and offering more latitude on covered benefits. In any case, the Trump administration said the plan was not final, describing it as a “work in progress.”

Nearly 90 percent of Covered California enrollees rely on federal premium subsidies and many could drop coverage if they lose thousands of dollars in government assistance. And the ones who do stay insured are likely to be the sickest and costliest patients, according to some experts. In response, health insurers would be forced to significantly raise rates in the individual market, both on and off the exchange. It could mark a return to the double-digit rate hikes routinely seen before the 2010 health law.

“The worst possible thing is a market that tends to just have sick people,” California Insurance Commissioner Dave Jones said. “That is exactly where the Republican proposal is taking us. It’s a recipe for disaster.”

Peter Lee, executive director of Covered California, predicts a downward spiral if only the sickest customers hang onto coverage. The net effect of the Republican proposal “would be to increase the costs for everyone in the individual market since the lower-income people that do enroll are likely to be sicker and costlier — raising the premiums paid by everyone covered.” 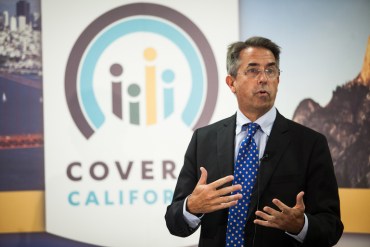 Under Obamacare, premium subsidies are tied to income and the local cost of coverage. The less people earn, the more financial assistance they receive. The Republican plan pegs premium tax credits only to age, starting out at $2,000 a year for people under 30 and increasing to $4,000 for those over 60. Those credits begin to phase out for people making $75,000 a year or more.

The chief executive of Molina Healthcare, an insurer in Covered California and other exchanges, said the GOP’s age-based tax credits are inadequate for people to maintain insurance. Dr. J. Mario Molina said premium rate hikes could reach 30 percent next year in California and other states if Congress and the Trump administration don’t do more to stabilize the marketplaces. This year’s increase in California was an average of 13.2 percent.

“This bill is not making me more optimistic about the future of the marketplaces,” Molina said. “There is nothing here providing any comfort or relief.”

“The flat tax credit which is adjusted by age, but not by income or premium, does not give healthy people enough incentive to stay in the market, especially in absence of an individual mandate,” the group wrote.

The House plan eliminates Obamacare’s individual mandate to purchase coverage in favor of a 30 percent surcharge imposed on applicants who go uncovered for longer than 63 days. Some insurers fear that proposed penalty won’t draw healthier customers in and might encourage more people to wait to sign up until they’re seriously ill.

The Standard & Poor’s ratings agency predicted that the House Republican legislation would decrease enrollment in the individual market nationwide by 2 million to 4 million people.

But the agency did not share critics’ concerns about market destabilization, saying the replacement plan would improve the overall risk pool because it would lower premiums for young people, encouraging more to sign up. For instance, the average premium for a 21-year-old could drop by 20 percent — before tax credits — because the House Republican plan eases restrictions on rating by age, according to the S&P.

The Affordable Care Act limits insurers to charging older policyholders no more than three times as much as the youngest customers. But the Republican plan might allow companies to charge five times as much.

That means a 64-year-old could see annual premiums rise by nearly 30 percent. And the GOP tax credits are less generous to many older consumers, forcing them to pick up more of the tab.

“We expect the replacement plan to result in an increase in the younger insured (ages 21-35), and a higher decline in the older insured (ages 45-64),” S&P analysts wrote.

But Covered California has less of an age imbalance than many other states, and critics of the Republican plan say the Republican changes might actually damage a market that doesn’t need substantial fixing.

The exchange has spent heavily on marketing to attract young people, and during the most recent open enrollment, 18- to 34-year-olds accounted for 37 percent of new enrollees. That’s up from 29 percent in 2014, when the exchange launched. In January, the federal marketplace for 39 other states reported that young adults accounted for 26 percent of sign-ups.

California had the healthiest mix of enrollees among states in 2014 and 2015, according to the latest federal data. And the state’s risk score, which assesses the overall health and medical needs of patients, was about 17 percent lower than the national average, according to state officials.

That has helped Covered California outperform other state exchanges in terms of rates. The average rate increase was 4 percent the first two years before the rise to 13.2 percent, on average, for 2017. That was better than the 22 percent average rate hike in exchanges nationwide.

The state launched with a better mix of enrollees by requiring participating insurers to cancel existing individual policies at the end of 2013. That unpopular decision quickly moved people into coverage that fully complied with the health law and created one giant risk pool for rating purposes.

Howard Kahn, the former chief executive of L.A. Care Health Plan, which sells on the state exchange, said the proposed cuts in subsidies would be “disastrous for Covered California. The risk mix will be worsened. Who is going to keep coverage no matter what? Those who need it most: sick people.”