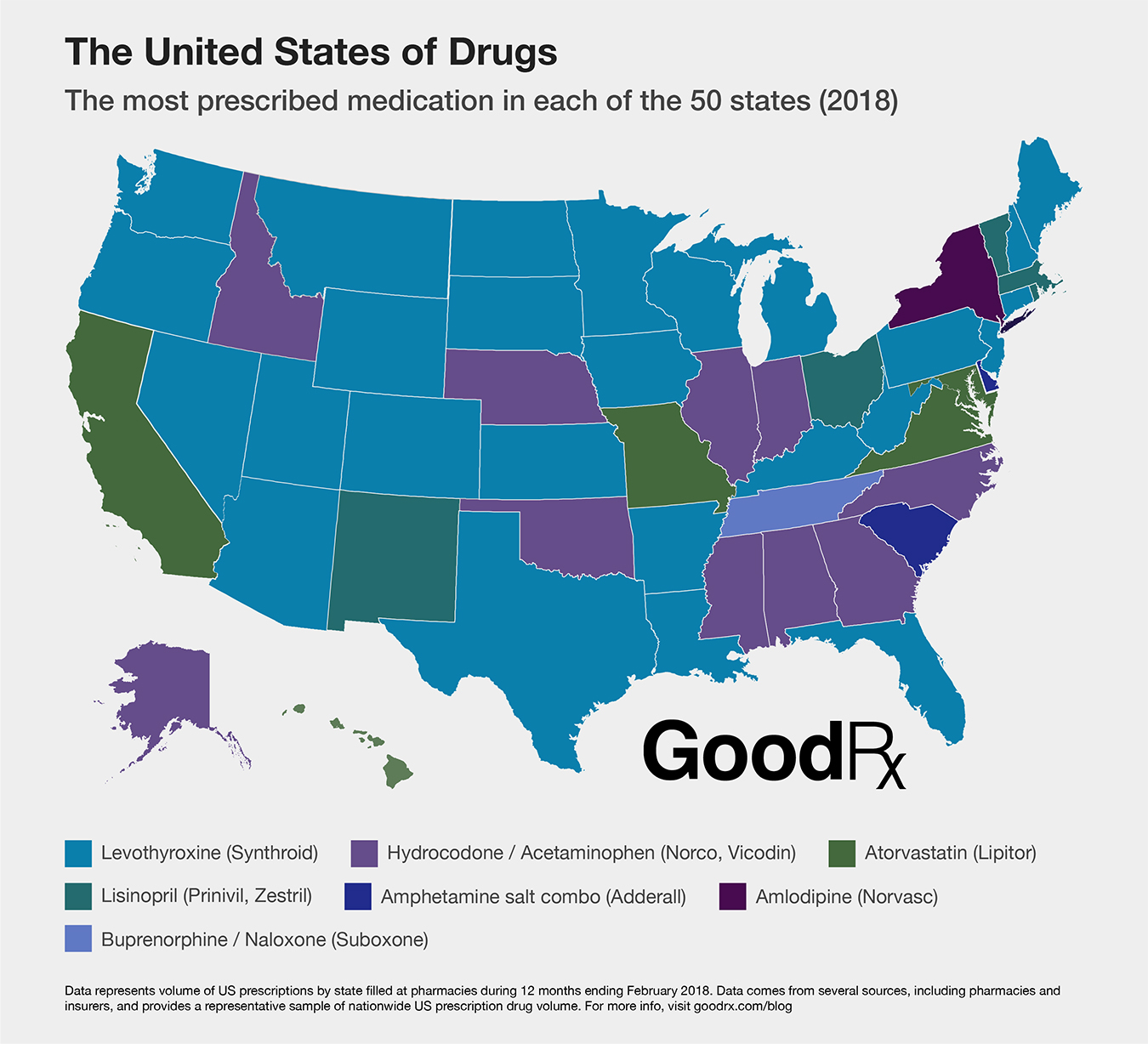 Americans fill about 4.5 billion prescriptions each year, at a cost of more than $323 billion. But what are we actually buying? In 10 states, the top prescriptions are opioid pain pills that are mixtures of acetaminophen and hydrocodone (brand names Vicodin and Norco), according to new data from GoodRx, an online prescription cost service.

The company looked at the top 10 drugs prescribed in each state from March 2017 to February 2018 and then presented the data as a map.

“There’s a geography to medications,” said Thomas Goetz, chief of research at GoodRx. “Our goal is to start bringing more transparency to drugs and drug pricing information.”

In more than half of states, Synthroid and its generics — to treat hypothyroidism — came in at No. 1. About 123 million prescriptions for the drug were written in 2016. And despite recent controversy questioning its effectiveness in the elderly, more than 15 percent of older adults are prescribed the drug.

Though opioid prescriptions appear to be on the decline, Vicodin and Norco remain popular, especially in the South. In Tennessee, however, Suboxone, a medication used to treat opioid addiction, is even more popular. Oddly, Adderall and generic versions of the medicine for attention deficit and hyperactivity disorder are the most prescribed drugs in South Carolina.

Geoffrey Joyce, director of health policy at the Schaeffer Center at the University of Southern California, warns that the data represented in the map could give a misleading picture of prescription drug patterns. It looks at individual drug products instead of larger classes of drugs used to treat a given medical issue. Overall, when similar types of drugs are grouped together the most common prescriptions are for drugs to treat high blood pressure, pain and mental health issues, according to recent data from IQVIA, a health data company.

GoodRx offers discounts on prescription drugs and provides an online tool that allows consumers to compare what a drug will cost at local pharmacies. Its state-by-state data come from several sources, including pharmacies and insurers, and reflect millions of prescriptions.

[Correction: This story and headline were updated at 5:15 p.m. PT on March 23 to correct the number of states in which the top prescriptions are opioid pain pills that are mixtures of acetaminophen and hydrocodone (brand names Vicodin and Norco).]