Three senior executives at scope maker Olympus Corp., which is under federal investigation for its role in superbug outbreaks, repeatedly invoked their Fifth Amendment right against self-incrimination when questioned recently about internal company emails.

The Tokyo executives declined to answer questions about the correspondence during two days of depositions Nov. 30 and Dec. 1 in a civil case against Olympus, according to lawyers representing a Seattle hospital and a patient’s widow.

The company emails, first reported by California Healthline and the Los Angeles Times, are key evidence in several pending civil suits against Olympus and could be relevant to the ongoing federal probe.

They show that Susumu Nishina, one of the three executives deposed, told the company’s U.S. managers in February 2013 not to issue a broad warning to American hospitals despite reports of scope-related infections in Dutch, French and U.S. hospitals.

At least 35 patients in American hospitals have died since 2013 after developing infections tied to tainted Olympus duodenoscopes — flexible, lighted tubes used to peer deep inside the body. More than 25 patients and families, including the Seattle-area widow, have sued Olympus for wrongful death, negligence or fraud.

Legal experts said it’s not uncommon for corporate executives to exercise their constitutional right against self-incrimination in civil lawsuits when separate criminal charges are possible. While not indicative of guilt, that legal move does indicate concern about what prosecutors could do with any testimony, the experts said.

“There is a real danger you end up saying something an aggressive prosecutor would seize on,” said Patrick Cotter, a former federal prosecutor and white-collar criminal defense attorney at law firm Greensfelder, Hemker & Gale in Chicago. He isn’t involved in the Olympus cases.

In addition to Nishina, the company’s chief manager for market quality administration at the Tokyo headquarters, the other two executives who were questioned were Hisao Yabe and Hiroki Moriyama, court records show. Yabe appears to be the highest ranking official among the three, serving as an executive officer in charge of the medical manufacturing improvement division, according to the company’s website.

Moriyama is a key figure in the company’s regulatory affairs and quality assurance unit. He’s listed on several company patents for endoscopes. And he was the manufacturer’s contact on numerous injury reports filed with U.S. regulators about scope-related infections.

Nishina fielded numerous emails containing questions from Olympus executives in the U.S. and helped shape their response to infections at American hospitals. Yabe and Moriyama were included on some of those emails, court documents show.

The three executives were recently deposed at the U.S. Embassy in Tokyo by lawyers representing Virginia Mason Medical Center in Seattle and Theresa Bigler. Her 57-year-old husband, Richard, died in 2013 after he was infected by a contaminated Olympus scope, according to the family’s lawsuit in King County Superior Court in Washington. Bigler is suing Olympus for wrongful death and seeking damages. 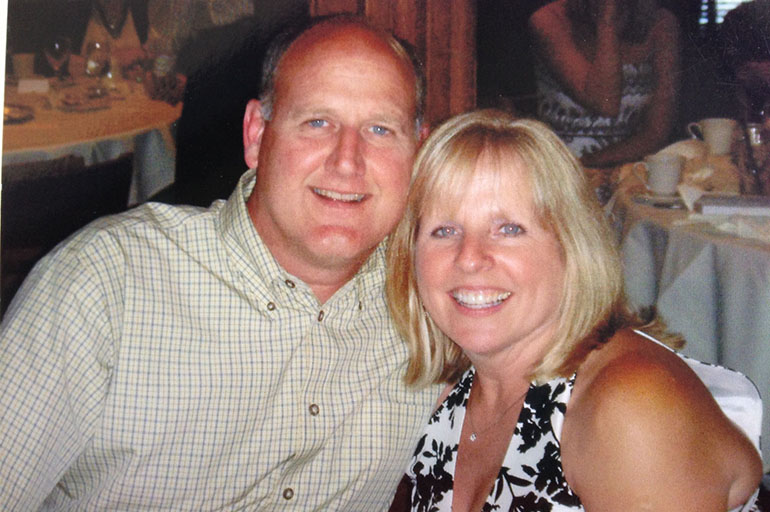 Theresa Bigler is suing Olympus for the death of her 57-year-old husband, Richard, alleging he was infected by a contaminated scope. (Courtesy of the Bigler family)

The separate federal investigation into Olympus surfaced in March 2015, when the company said it received a subpoena from investigators that “seeks information relating to duodenoscopes that Olympus manufactures and sells.”

A year later, in March 2016, Paul Fishman, the U.S. Attorney for the District of New Jersey, said the scope-related investigation was continuing. The focus of the probe was not specified, and a spokesman for the U.S. attorney’s office declined to comment further for this story.

The emails could figure in both the civil case and federal investigation because they show that a month after Olympus alerted European customers in January 2013 that a scope it manufactured could become contaminated it decided not to broadly warn U.S. customers.

In a Feb. 6, 2013 response to a question from a U.S. Olympus executive about whether American hospitals should be warned, Nishina replied it is “not need[ed] to communicate to all the users actively,” because a company assessment of the risk to patients found it to be “acceptable.”

Olympus official in Japan says a U.S. safety alert is not needed in February 2013 (p. 43)
View entire document on DocumentCloud

Nishina said, however, that a U.S. executive could respond to inquiries from a customer. Nishina, Yabe and Moriyama didn’t respond to requests for comment sent through their lawyers.

Olympus said it doesn’t comment on pending litigation. Previously, the company has said that patient safety is a top priority and it’s working with the proper authorities to address any scope-related issues. The company recalled its duodenoscopes in January and did repairs over several months to reduce the risk of infection.

Duodenoscopes are threaded down a person’s throat to diagnose and treat digestive tract problems such as gallstones, cancers and bile duct blockages. The tip of the snake-like device has proven difficult to clean even when following the manufacturer’s instructions, and antibiotic-resistant bacteria known as superbugs can spread from one patient to another.

Although infections have been tied to scopes made by other companies, Olympus dominates the market and its scopes remain in wide use.

In a court filing in the Washington state case, Olympus “denies it is liable to plaintiff in any manner” and said the alleged injuries to Richard Bigler “may have been the result of unforeseeable circumstances and reasons beyond the control” of the company.

At Virginia Mason, 39 people became infected from contaminated Olympus scopes and 18 of them died. The hospital said the patients who died had other underlying illnesses.

Rando Wick, an attorney representing the hospital, said it was disappointing that Olympus executives refused to answer questions, but he said it lends support for Virginia Mason’s case.

“Olympus in Japan knew of the dangers of the duodenoscopes not being able to be adequately disinfected even when Olympus guidelines are followed,” Wick said. “Yet they failed to notify health-care providers in the U.S. of this problem.”

John Gagliardi, a Seattle attorney representing the Bigler family, agreed it was a significant development. “You only take the Fifth if you think you could be in real trouble,” he said.

Next month, the attorneys said they are scheduled to depose Olympus executives in the U.S. They include Laura Storms, vice president of regulatory and clinical affairs at the company’s U.S. headquarters in Center Valley, Pa., and Donny Shapiro, a director of regulatory affairs in San Jose, Calif.

After receiving the reply from Nishina, Storms wrote to Shapiro: “Donny, [Olympus Japan] has determined that a global communication is not required.”