Medicare cut payments to 2,583 hospitals Tuesday, continuing the Affordable Care Act’s eight-year campaign to financially pressure hospitals into reducing the number of patients who return for a second stay within a month. 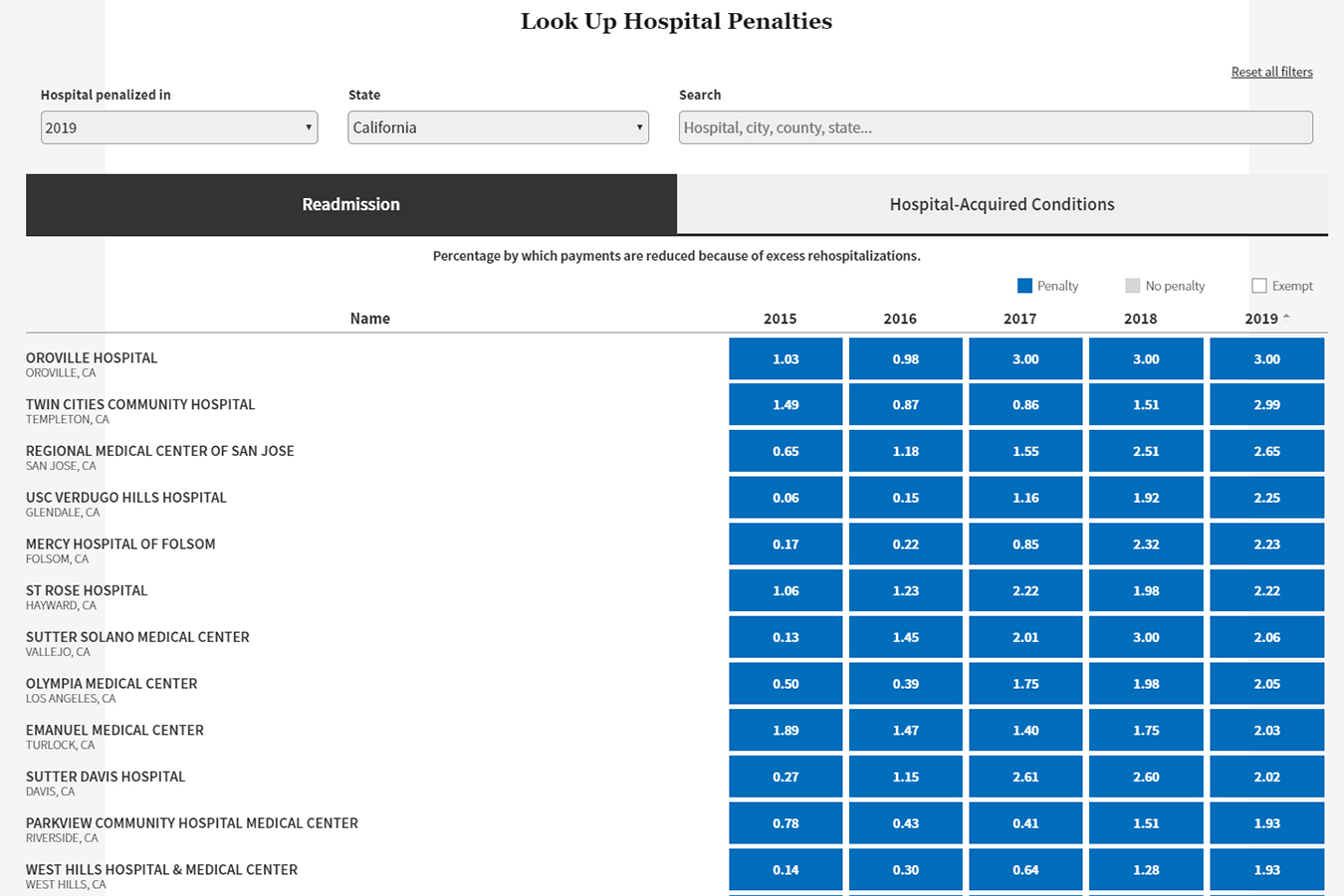 Look Up Tool
Here are the hospitals hit with readmissions penalties for 2020. You can filter by location, hospital name or year.

The severity and broad application of the penalties, which Medicare estimates will cost hospitals $563 million over a year, follows the trend of the past few years. Of the 3,129 general hospitals evaluated in the Hospital Readmission Reduction Program, 83% received a penalty, which will be deducted from each payment for a Medicare patient stay over the fiscal year that begins today.

In California, Medicare penalized 217 hospitals, or 74% of those it evaluated. As in the past, California hospitals were punished less frequently and less severely than the national average. Only two of the state’s hospitals received the maximum penalty of 3%, and the average was 0.56% of each Medicare patient reimbursement for the next year.

Although Medicare began applying the penalties in 2012, disagreements continue about whether they have improved patient safety. On the positive side, they have encouraged hospitals to focus on how their patients recuperate, and some now assist them in procuring medications and follow-up appointments.

But the hospital industry and some academics have raised concerns that some hospitals may be avoiding readmitting patients who require additional inpatient care out of fear of the financial repercussions, while others have said the program is not showing major benefits.

“A lot of hard work has gone into trying to reduce readmissions, and the needle has not moved very far,” said Dr. Karen Joynt Maddox, co-director of the Center for Health Economics and Policy at Washington University in St. Louis, who has been skeptical of the initiative. “It’s been a huge investment by hospitals but not very much in outcomes, but some good things have come out of it.”

A few studies have even found an increase in mortality since the penalties took effect, but other studies, including a recent one by the Medicare Payment Advisory Commission (MedPAC), an independent body that helped devise the approach for Congress, identified no such link.

The MedPAC staff’s preliminary analysis, made public last month, found that the frequency of Medicare patients being readmitted within 30 days of discharge dropped from 16.7% in 2010 to 15.7% in 2017. However, the analysis said the decrease was more significant once it took into consideration that the average patient was frailer in 2017 than in 2010 and thus more likely to end up back in the hospital, with all other things being equal.

“On a risk-adjusted basis, it appears that readmissions have declined in 2010 to 2018 without causing a material increase in mortality,” Jeff Stensland, a MedPAC analyst, told the commission.

The penalties are based on the frequency of readmissions of Medicare patients who had originally been treated for heart failure, heart attack, pneumonia, chronic lung disease, hip and knee replacement or coronary artery bypass graft surgery. Readmissions that were scheduled to occur are not counted.

Medicare counts the readmission of patients who returned to a hospital within 30 days even if that hospital is not the one that originally treated them. In those cases, the penalty is applied to the first hospital. This year’s penalties are based on discharges from July 1, 2015, to June 30, 2018.

“This is like driving your car by looking in the rearview mirror of the car three cars behind you,” Dr. Jonathan Perlin, the chief medical officer of HCA Healthcare in Nashville and a MedPAC commission member, said at last month’s meeting. “It’s very difficult to operationalize.”

The average penalty will be a 0.71% decrease in payment for each Medicare patient who leaves the hospital over the next year, according to a Kaiser Health News analysis. The KHN analysis also found:

These figures do not include 2,142 hospitals that Medicare exempted from the program this year, either because they had too few cases to judge; were veterans hospitals, children’s hospitals, psychiatric hospitals or were critical-access hospitals, which are the only hospitals within reach of some patients.

Also, Maryland hospitals were excluded because Congress lets that state set its own rules on how to distribute Medicare money and handle readmissions.

The Centers for Medicare & Medicaid Services determines its penalties by looking at national averages for each of the conditions, so hospitals that have reduced their readmissions from previous years can still take a hit. The hospital industry argues it may be approaching the limits of how much it can do to prevent readmissions. A repeat stay, hospitals say, is sometimes necessary no matter what precautions are taken.

Akin Demehin, director of policy at the American Hospital Association, said: “It raises the question: Is the value of the program to improve care or just to enact penalties on hospitals?”