Gerardo Alejandrez (left) meets with counselor Erich Roberts at Oakland Technical High School in September 2017. Alejandrez used to throw chairs, hit his classmates and curse at his teachers before enrolling at Oakland Tech. “It was terrible times for me.” (Heidi de Marco/California Healthline)

Begun as a health care safety net for children and low-income families, Medicaid increasingly underwrites a range of services in America’s public schools.

This story also ran on The Mercury News. This story can be republished for free (details).

OAKLAND, Calif. — Gerardo Alejandrez used to punch classmates, throw chairs and curse at his teachers, conduct that forced him to switch from school to school. “I had a lot of anger issues,” the 16-year-old said recently.

Then Gerardo entered a class at Oakland Technical High School for students who have mental health or behavior issues. In that classroom, the teacher gets support from Erich Roberts, a psychiatric social worker assigned to the group. Oakland Unified School District bills Medicaid, the nation’s insurance program for low-income residents, for Roberts’ services.

Those payments officially cover the time he spends — in and out of the classroom — providing therapy and other assistance for nine Medicaid-covered youths as well as meeting with their family members. Roberts’ presence in the classroom is also an asset for the teacher and four other kids in the class who are not on government insurance. Many of the students in the class would likely drop out without the extra help, Roberts said.

Medicaid, created in 1965 to provide health insurance to the poor, now functions as a lifeline for millions of American students such as Gerardo — whose grades have improved and who wants to become a fashion designer — as well as hundreds of school districts across the country like Oakland Unified. The public insurance program has evolved so that it now finances myriad education-related services, including transportation for kids with disabilities, school clinics and counseling for children from turbulent backgrounds. Medicaid funds are now woven into the nation’s educational system.

But as Congress seeks to cut federal health spending, the use of Medicaid dollars in schools could come under new scrutiny. Critics question whether schools are the best entities to provide all the services they now do, and if the educational system has become too reliant on the health program. Educators and advocates counter that schools are the opportune place to address health-related issues and that federal law requires them to provide such benefits. And, they say, if Medicaid doesn’t pay, who will?

With a Republican administration vowing to trim Medicaid, Kaiser Health News is examining how the U.S. has evolved into a “Medicaid Nation,” where huge swaths of Americans rely on the program, directly and indirectly, often unknowingly. Medicaid’s role in schools is a telling example.

Medicaid spends only $4 billion of its $400 billion annual budget in schools — a “very small portion of the pie,” said Jessica Schubel, a senior policy analyst at the bipartisan Center on Budget and Policy Priorities. But for the school districts providing an array of services that have quietly become vital to students and families, losing this funding source would be immense, she said, “a big deal.”

The exact nature of the consequences would depend largely on the state and school districts, as jurisdictions deploy Medicaid funds differently. Since states must contribute a portion of total Medicaid funding to the federal allocation, the amount of money available for school district spending is in part determined by statehouse politics.

Generally, the federal program can help districts provide a variety of services, staff and equipment for their students. Although not all districts tap into funding, Medicaid will reimburse districts for in-school vision and hearing exams, occupational therapy for special-education students, even diabetes and asthma management. It covers wheelchairs and other medical devices so a student can attend class. In Oakland Unified School District and others around the nation, Medicaid also supports mental health services. 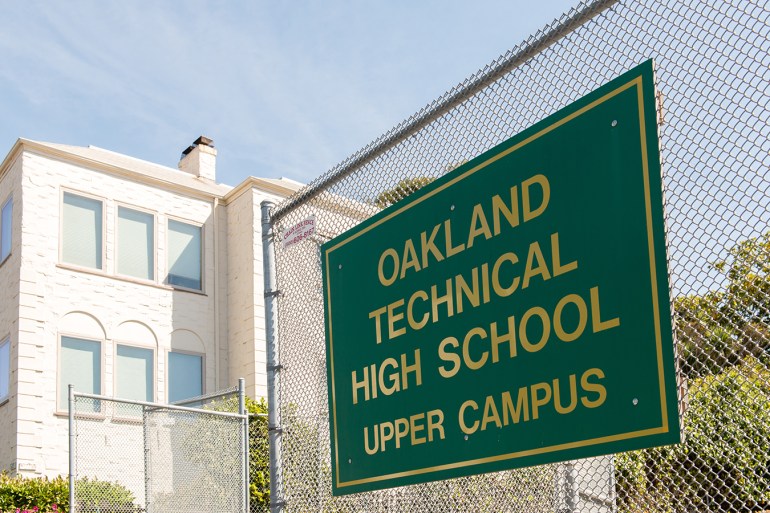 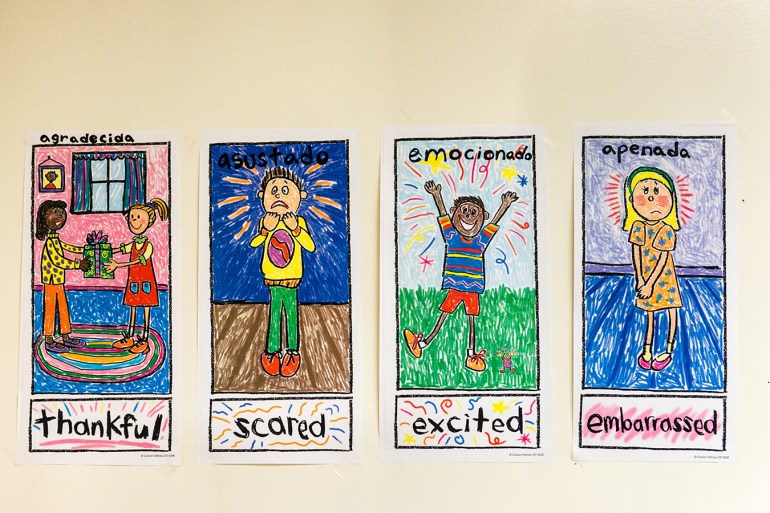 In 2017, a survey by the School Superintendents Association found that 68 percent of superintendents said Medicaid dollars funded school nurses, counselors and other health staff members. More than half of superintendents said they have worked to expand the number of students enrolled in Medicaid, which can increase revenue to the school districts. The funds also enable districts to pay staff salaries like Roberts’, buy medical equipment and generally bolster their education budgets, Schubel said.

But some critics of Medicaid, notably political conservatives, question how funds flow into school districts and whether educators have wrongly plumbed the program to cover budget shortfalls. They argue that because districts receive other sources of federal funding for special education and health services in schools, they shouldn’t rely on federal Medicaid dollars to pay for them.

Lindsey Burke, director of the Center for Education Policy for the Heritage Foundation, a conservative think tank, argues that Medicaid expenses overall are growing too quickly. She said changes are needed to allow states and districts more flexibility and to reward “sound choices” about what to deliver using Medicaid money.

“Medicaid requires that poor children’s health care be covered, but does not prescribe that such coverage be delivered by school districts,” Burke said.

In the past, the government penalized some school districts for straying far afield from intended purposes. Ten years ago, federal investigators uncovered improper billing for school-based Medicaid services, and cases of waste and fraud in Texas, Massachusetts and New York. Dollars meant for medical care were used for children’s transportation or school officials’ salaries or benefits. Texas, in particular, was found in 2007 to have submitted close to 300 incorrectly coded claims, resulting in nearly $19 million of federal payments for costs not allowed under Medicaid’s in-school services program. 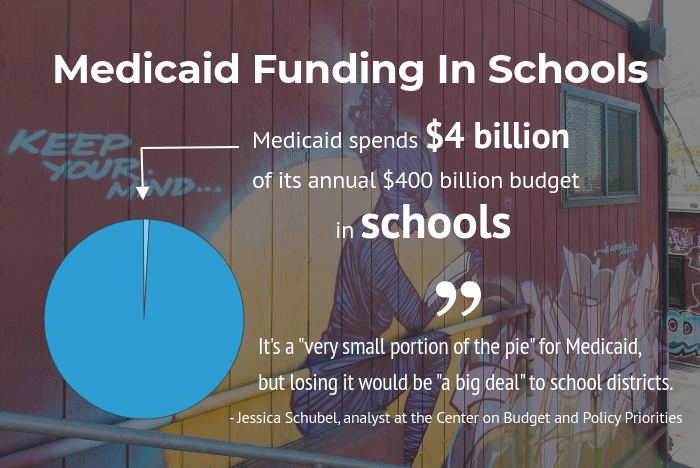 Filling Gaps Left By The Feds

The increasing reliance by schools on Medicaid in many states is in some ways a byproduct of federal mandates to broaden educational services and a lack of specific funds to pay for them.

In 1975, Congress passed the Individuals with Disabilities Education Act (IDEA), which gave students with disabilities the right to a free education adapted to their needs. The law stipulates that Congress can pay up to 40 percent of the average cost per student for every child receiving special education. However, payments have never met that threshold.

Among the students served by Medicaid in the classroom is Michael Walt, a 10-year-old with Williams syndrome, a genetic abnormality that causes heart problems and severe developmental delays. His school, Forestdale Elementary in Springfield, Va., provides a team of speech and occupational therapists to improve Michael’s physical and intellectual abilities. 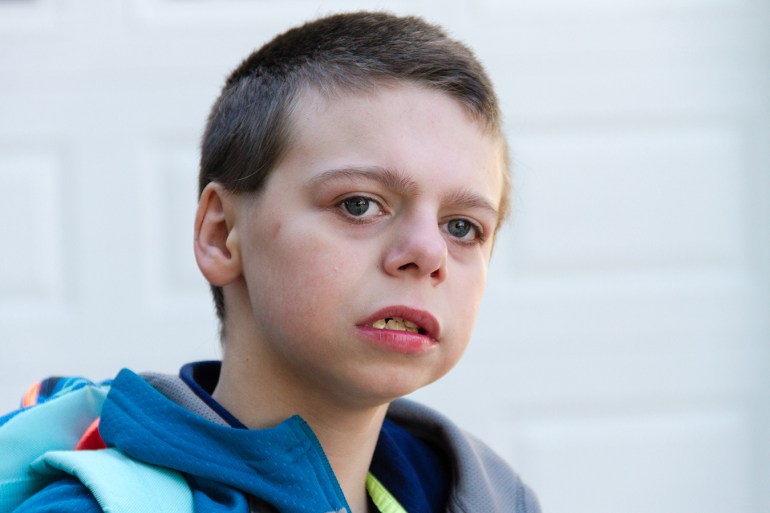 Michael Walt, a pupil at Forestdale Elementary School in Alexandria, Va., was diagnosed with attention deficit hyperactivity disorder, autism and Williams syndrome, a condition linked to intellectual disabilities and heart conditions. Medicaid provided access to a team of therapists who taught him to walk, talk and hold utensils. (Heidi de Marco/California Healthline) 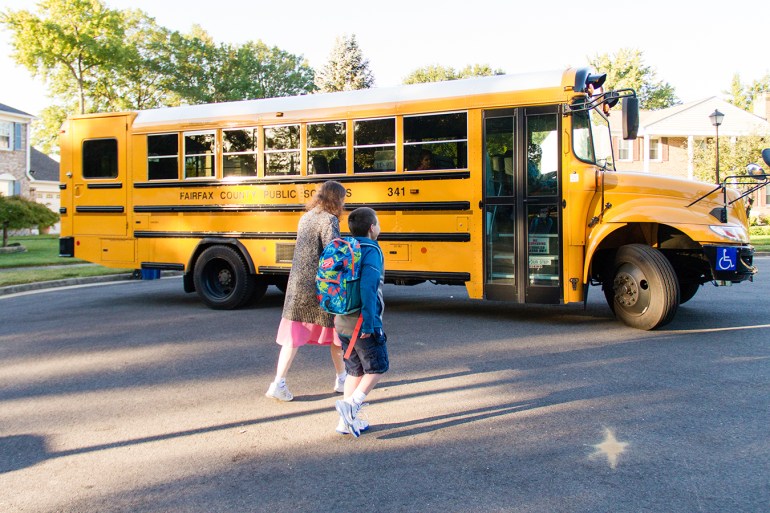 His mother, Lara Walt, an attorney, said services offered at school have improved Michael’s speech, gait and motor skills. He can now eat oatmeal with a spoon. Though her son may never live independently, she said, without Medicaid funds supporting special education services, “he’d be in a much worse space.”

While some California counties in and of themselves deploy millions of Medicaid dollars each year in classrooms, some entire states deploy little — or none. Much is unknown about exactly how Medicaid funds are spent in schools. “There is just not very good documentation of what policies states and locals have and how much they are using it,” said Nora Gordon, an associate professor at Georgetown University’s McCourt School of Public Policy.

Los Angeles Unified School District, which has a total budget of $7.5 billion and serves about 750,000 children, receives more than $20 million in annual funding from Medi-Cal, the name of its Medicaid program. The money helps pay for medical screenings, specialized equipment and health services for students at medical and mental health clinics. It is also used to help enroll students and their families in health insurance plans under the Affordable Care Act. 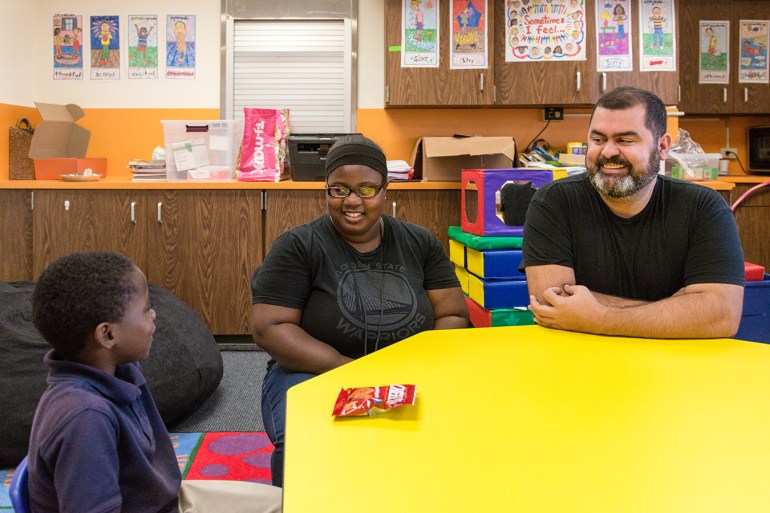 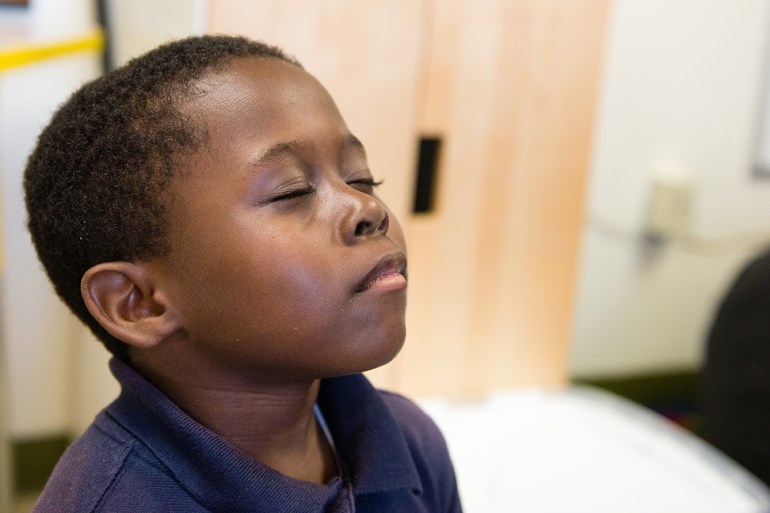 The district has nurses to serve each school, including 12 positions that are fully funded by Medi-Cal. The nurses provide a range of services, such as immunizations and asthma treatment.

To qualify for the Medicaid-funded behavioral health services in Alameda County, students must be enrolled in Medi-Cal and have a mental health condition such as depression, anxiety or post-traumatic stress disorder.

JP De Oliveira, a professional clinical counselor with the Oakland-based East Bay Agency for Children, works at Hoover Elementary School in Oakland with students who are in Medi-Cal and have diagnoses that qualify them for counseling. His time with those kids is billed to Medi-Cal.

One of the students, 7-year-old Rodney Davis, is an outgoing child who became anxious last year and stopped wanting to go to school. Oliveira counsels Rodney, plays games with him and leads him in breathing exercises. “He really needs that reassurance … that everything is going to be OK,” Oliveira said.

Rodney’s mother, Shamika Thomas, said she’s thankful her son can get the help he needs while at school. “It’s a huge relief,” she said.

How Medicaid Became A Go-To Funder For Schools