When Sonia Anderson got her first Fitbit step tracker, her poor pooch, Bronx, had no idea of all the steps that were coming.

The device — which counts every step Anderson takes and displays those steps on an app — was a Christmas gift from her daughters two years ago.

At the time, Bronx, a Yorkshire terrier, was younger and could still manage the additional walks up and down the trails along the sprawling apartment complex in Alexandria, Va., where Anderson lives. Anderson was on a mission to clock 10,000 steps a day.

More recently, as Bronx hit age 13, the dog started coming to dead stops during these long treks, as if to ask: What’s going on here? 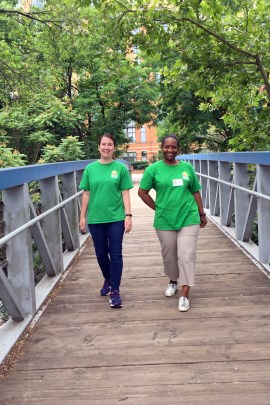 Sonia Anderson and Landy Sorensen often walk together on Friday mornings while volunteering at a local food bank. The friends track each other’s progress on their cellphone apps and compete to see who logs the most steps. (Bruce Horovitz/KHN)

Like many other folks 50 and older, the 63-year-old Anderson has been commandeered by the step-tracker craze that began about a decade ago, and her dog is an unwilling victim.

Anderson has bought into the $26 billion global step tracker industry and matches her daily count with her Fitbit-wearing friend, Landy Sorensen, 43. The two women have become inseparable Fitbit fanatics and competitors at the Arlington Food Assistance Center, where they amass additional steps every Friday morning while volunteering in the food bank. Now, they diligently count each other’s steps on their cellphone apps in real time — and compete to record just one more step than the other.

“My Fitbit made me a friend I’d have never had,” Anderson said.

It might also help her live longer, according to a recent Harvard University study published in the Journal of the American Medical Association. The study concluded that among older women, as few as 4,400 steps per day helped to lower mortality rates.

With more steps per day, mortality rates decreased before leveling off at 7,500 steps, the study found.

In other words, the magic marketing number of 10,000 daily steps embraced by so many wearers of these devices — from Fitbits to Garmins to Samsungs to Apple Watches — may be about 2,500 steps more than necessary.

Truth be told, even the woman behind the study — who concedes that she, too, is enamored of her step tracker — can’t say how many steps are the right number for each walker.

“No one size fits all,” said I-Min Lee, an associate epidemiologist at Brigham and Women’s Hospital in Boston and a professor at Harvard Medical School.

But no matter how many steps you take, merely wearing and using a fitness tracker — particularly for older women, older men and other people who tend to be somewhat inactive — “can be beneficial not only to your health but to your quality of life,” Lee said.

Of course, some folks go over the top with their trackers — and proudly post their more unusual stats on social media sites such as Reddit. Like the vegan fitness buff who posted a video about logging 50,000 steps a day for five days. And the warehouse stocker who said that he slogged 20,000 steps a day on the job. And there’s also the guy who credits his Fitbit for helping him slim his 40-inch waist to a svelte 34 inches.

Clocking miles is even popular with workers who are on the clock. C-SPAN network, for instance, ran a month-long walking challenge sponsored by its health insurance plan, Cigna. The step competition among C-SPAN departments, which ended July 3, totaled 22,862,341 steps walked by 74 participants from 12 teams, spokesman Howard Mortman said. That’s an average 9,966 steps per day per person. More specifically, he said, that’s a total 1,028,805 calories burned — and 294 pounds lost. (For the record, the cable network’s digital media team won.)

For Anderson and Sorensen, fitness tracking has created a special bond — and a way to keep close tabs on each other. Like the day when Sorensen noticed that Anderson had suddenly doubled her step output. She immediately texted her and discovered that Anderson was on a European vacation and that her sightseeing had doubled her daily count. Another time, when Anderson noticed that Sorensen had barely logged 2,000 steps, she sent a concerned text asking: “Are you OK?”

“I thought it was so sweet of her to check in on me,” said Sorensen, who said the problem was actually a battery issue. “This is the kind of connection I wouldn’t otherwise have.”

Sorensen averages about 15,000 steps daily — roughly between 5 and 7 miles — and often tucks her early-generation Fitbit into a specially designed gold bracelet, so folks can’t even see she’s wearing one. When she wears this bracelet to formal affairs, no one suspects she’s tracking her footwork, she said. 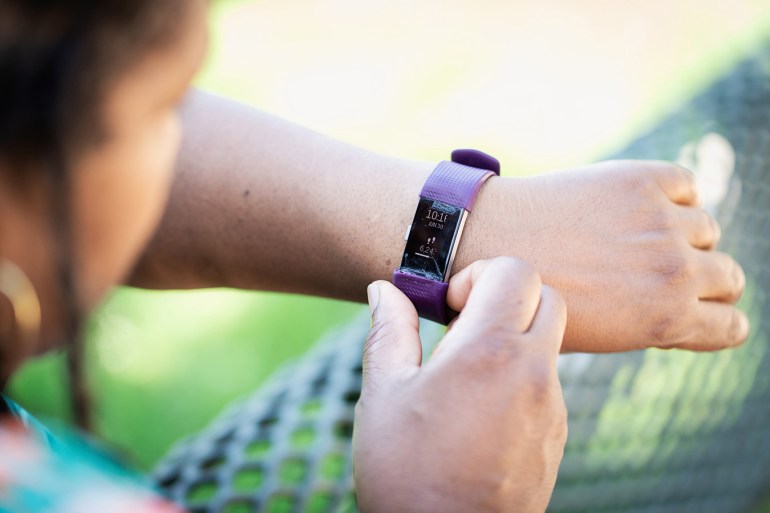 Sonia Anderson, 63, checks her Fitbit. A recent Harvard University study published in the Journal of the American Medical Association concluded that, among older women, as few as 4,400 steps per day helped to lower mortality rates.(Scott Suchman for KHN) 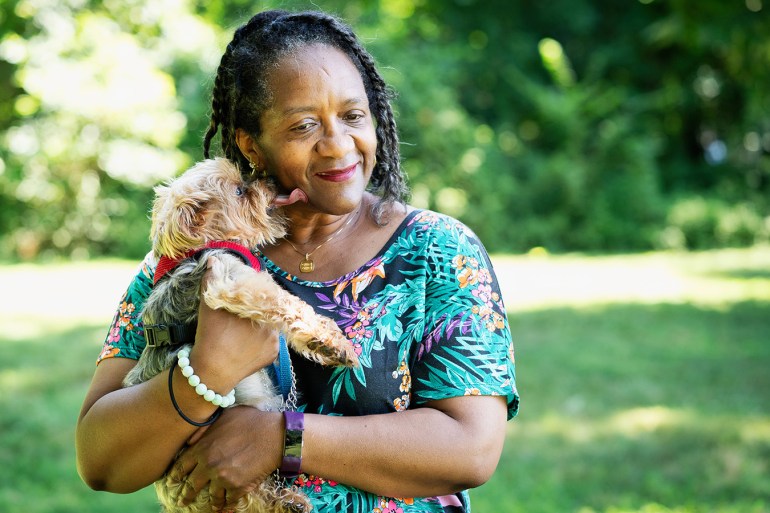 Harvard’s Lee said she first got interested in wearable devices five years ago during a workplace program that promoted healthy lifestyles for doctors. Lee received a free device — whose familiar brand name she prefers not to publicize — and was asked to form a team of walkers. Lee, 59, is hesitant to discuss her step count because she believes the sheer act of regularly exercising is far more important than the sum total of steps. But, after some cajoling, she said she averages about 15,000 steps per day.

Studies show that 150 minutes of moderate activity, such as walking, can lower the risk of heart disease and stroke, improve sleep, help reduce weight gain and improve bone health.

Perhaps no one knows that better than Tom Holland.

He’s an exercise physiologist and sports nutritionist who has regularly appeared on “Good Morning America” as a fitness coach.

He also has worked as a personal trainer with thousands of clients — many of whom use step trackers. He’s a huge fan of fitness trackers because they get people moving.

“The fitness tracker is the first step to getting people off the couch,” he said. At the same time, he is put off by the much-ballyhooed 10,000-step daily goal, which he said is arbitrary.

“We need real numbers to shoot for,” he said. Holland, who recently turned 50, prefers recommending smaller amounts of exercise — not big feats such as 10,000 steps. “I’m a big believer in excessive moderation. Don’t do a lot a little bit — do a little bit a lot.”

Unless, of course, it involves himself.

Like the 70,000, or so, steps he clocked in a recent 50-kilometer trail run. Because Holland also is a triathlete, he not only uses a Fitbit from time to time but also sometimes slaps on “smart” sunglasses or T-shirts or shorts that track fitness data. Most often, however, he wears a Garmin fitness tracker that measures his steps, his sleeping habits and his heart rate.

“I’m not an addict,” he said jokingly, “but if you see me passed out on the side of the road, check my tracker, please.”

As for Anderson’s little dog, Bronx, he sometimes gets extra incentive to go on those walks. Occasionally, Anderson brings along her daughter’s English bulldog, Winston, whose namesake is the British statesman Winston Churchill. Perhaps, in a cosmic nod to future step trackers of all kinds, it was Churchill who said it best: “I never worry about action, but only inaction.”

In The Battle Of The Fitness Trackers, The Most Steps Might Not Win