Five hundred or so days ago, the nation’s health insurance system was in the throes of change.

Obamacare’s health insurance exchanges had begun to overcome their sputtering launch. The law’s Medicaid expansion was starting to roll out across the country.

And in California, state Sen. Richard Lara (D-Bell Gardens) brought advocates together to take a new approach on an old issue.

Their decision: It was time to fight for health coverage for undocumented workers, too.

“We’ve made enormous strides to reduce California’s uninsured population with the implementation of the Affordable Care Act, but we won’t have a truly healthy state until everyone has access to quality, affordable coverage,” Lara announced in January 2014.

“Immigration status shouldn’t bar individuals from health coverage, especially since their taxes contribute to the growth of our economy.”

Lara’s plan involved expanding Medi-Cal and creating a new health insurance exchange for undocumented immigrants to purchase coverage. His bill — SB 1005 — ultimately stalled in the senate. But he’s back with a new bill (SB 4), more co-sponsors and more momentum.

While there are still debates over the ACA’s cost, even critics concede that the law’s coverage expansion has worked.

The nation’s uninsured rate has now fallen to less than 12%, according to Gallup, and continues to plummet. 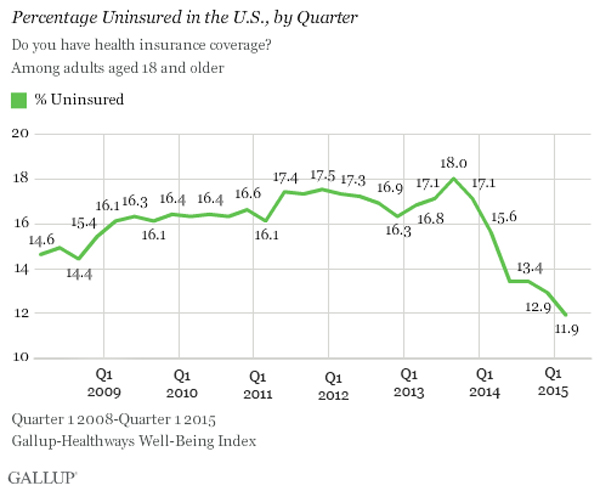 But unless there’s major reform, the nation’s uninsured rate will eventually hit a floor before it hits 0%.

While the ACA expanded coverage, it didn’t make it universal. And in California, as many as 4 million people are expected to remain uninsured.

About 1 million of them are undocumented immigrants.

Not everyone wants to expand coverage to this group. Some critics are worried that Medi-Cal is already facing too many new enrollees, and that another coverage expansion would only exacerbate access issues. While supporters of SB 4 say it would cost just $350 million to expand Medi-Cal under the bill, citing a UCLA and UC-Berkeley report, others are pointing to a new Senate estimate that fully covering undocumented immigrants through the program could cost as much as $740 million per year.

“But without money from Congress and President Obama it will be very difficult and costly for California taxpayers to fund all of these bill proposals.”

But advocates believe they have public support on their side. According to a statewide poll released in October 2014, 54% percent of survey respondents said they support covering undocumented immigrants.

And given the cost of administering health care to undocumented immigrants in California — more than $1 billion in uncompensated care per year — they think the numbers add up.

“The ‘best’ argument for expanding health care coverage is that almost all undocumented immigrants are in families with working adults,” says UCLA health policy professor Steven Wallace. “They contribute to the economy we all benefit from, pay taxes … and are members of the community.”

“It is in everyone’s interest to help these workers and their families stay healthy and productive,” he adds. “And minimize the burden of the diseases they may end up with, which is one role of health insurance.”

California’s move is unusual because many other states, especially in the South, are still grappling with expanding coverage to populations that were intended to be covered by the ACA.

“We are having a very different conversation,” Cindy Zeldin, executive director of Georgians for a Healthy Future, told Anna Gorman of Kaiser Health News. “I think we are really far away as a state from where California is.”

But the push to expand coverage in California tracks with national movement on immigrants’ rights, says Kinsey Hasstedt, a policy analyst with the Guttmacher Institute.

For example, there are efforts at the federal level — the House is considering the Health Equity and Access Under the Law (HEAL) for Immigrant Women and Families Act — to expand coverage to immigrant populations.

“It’s different than California’s Health Care for All movement,” Hasstedt points out. “The HEAL Act extends to lawfully present immigrants.”

“But streamlining all of this, and making it such that regardless of your status, you’d get health care, would benefit everyone,” she says.

“The prospects for SB 4 are better this year than last because the economy is better,” says Wallace. He notes that the state can likely afford the expansion — which some advocates peg as a 2% increase in annual Medi-Cal spending — and that health care providers are likely to offer “solid” support, given that the plan would reduce their uncompensated care costs.

But the road for SB 4 is long.

The bill needs to pass out of the Senate Appropriations Committee.

Then it goes to the Senate floor.

Then it needs to go through the same process in the Assembly.

Then it needs to get revised again.

“If it stalls at any point in the process, it becomes a two-year bill,” concedes Anthony Wright, director of Health Access California.

“But we have greater momentum — we are at a better place this year than last year,” he adds, pointing to the bill’s lower cost and increased number of co-sponsors.

And just getting out of the appropriations committee would be a small victory.

“If we pass this hurdle, then we advance further than last year’s proposal,” Wright says.

The plan also appeals to what some California leaders say is in the state’s DNA: Being the nation’s pace car on an important health care issue.

“Once again, California has the opportunity to demonstrate visionary leadership,” Lara said on a conference call with reporters on Monday.

“And realize the dream of a truly healthy California.”

Here’s a look at other stories making news on the road to reform.

Do the ACA’s patient satisfaction measures improve care? Writing at the Association for Health Journalists’ blog, Joanne Kenen examines how the health law’s intended measures are playing out.

The Pioneer ACO program, examined. New research suggests that participants in the much-watched pilot program saved 1.2% on health care spending. While some researchers have questioned the findings, the authors of the study defend their work on the Incidental Economist blog.